Loki, the new Marvel series from Disney Plus, establishes its tone up front, in an episode with a number of laughs and fun concepts, albeit one where the drama doesn’t always neatly fit together. After the God of Mischief (Tom Hiddleston) exits Avengers: Endgame stage left, he finds himself in the Gobi Desert in Mongolia (though it’s unclear when he finds himself), and the shot reintroducing him, half-buried in sand, mirrors a shot of Tony Stark in the original Iron Man, after he too escapes captivity and crash-lands far away. Loki, forever a villain or B-player, is finally ready for the spotlight, though glory won’t come easy for the Asgardian Prince.

The show’s first episode does a couple of key things. On one hand, it looks backward and reintroduces us to Loki minutes after the original Avengers film (or rather when it was revisited in Endgame), in which he tried (and failed) to take over the planet. On the other, it looks forward to the future of the MCU, which hopes to shed its Infinity Stone baggage and petty planetary conquests in favour of a threat so enormous — listen closely and you’s hear the words “multiverse” and “madness” in close proximity — that the show has no choice but to deflate and cast aside the events of Phases 1 through 3.

That’s where the TVA — the Time Variance Authority — comes in.

The first TVA member we meet is the imposing Hunter B-15 (Wunmi Mosaku), who smacks Loki in the mouth with her nightstick, which sends the wannabe ruler of Midgard falling backward in slow-motion. His face flops around comedically, and for a moment, it’s unclear why — until B-15 strolls casually into frame at regular speed, revealing the incredible temporal power she wields as if it were a mundane, everyday task. So much for Loki’s “glorious purpose.”

The organization’s headquarters, designed as something of a cross between The Good Place and the ’60s segments of Men in Black III, exists out of time and seeks to preserve the established timeline as we’ve seen it unfold. As Loki is taken into custody and processed, the TVA’s mundane office workers dryly ask him questions that seem too enormous to comprehend, but are quite routine to the administrators — like getting him to sign a document confirming everything he’s ever said. Loki talks up his own godhood and his plans for domination, but these office drones couldn’t care less. Once the central threat to the Avengers, Loki is a mere fly to the TVA, a routine pest one swats away without giving too much thought. To these cosmic beings, Infinity Stones are disposable trinkets. Whatever grandeur Loki and the MCU once had has now been thoroughly deflated. It’s quite funny to watch.

Whatever grandeur Loki and the MCU once had has now been thoroughly deflated. It’s quite funny to watch.

The TVA locates deviations in time — like this Loki from 2012, who won’t go on to live the same life as the Loki we’ve seen — and “prunes” these timeline branches, thus ensuring a singular continuity; “the sacred timeline,” its members call it. They are slavishly, dogmatically beholden to events as dictated by all-powerful The Time Keepers, a trio of godlike beings whose word they take on faith, and who are akin to both the Trinity of Christianity, and the Hindu trimūrti: Brahma the creator, Vishnu the preserver, and Shiva the destroyer. What they say stays, stays. What they deem unworthy of existence, well, we see this play out when another “deviation” fails to follow the rules. The TVA’s Minute Men are “time-cops,” though their S.S.-style helmets evoke a more fascistic mindset.

There is, however, one TVA worker, Agent Mobius (Owen Wilson), whose ideas differ from the norm, if only slightly. The comic version of the character — a mustached legion of clones — was based on Marvel Comics editor Mark Gruenwald, whose job in the ’80s and ’90s involved maintaining continuity. It was a meta-joke of sorts, given Mobius’s similar function across comics like The Fantastic Four, but the show’s version of the character is more of an audience stand-in who both wants to preserve existing events but also wants to see how this new Loki’s story will play out. There’s a murderous threat lurking elsewhere in time, and Mobius believes Loki could be the Hannibal-esque key to catching him. 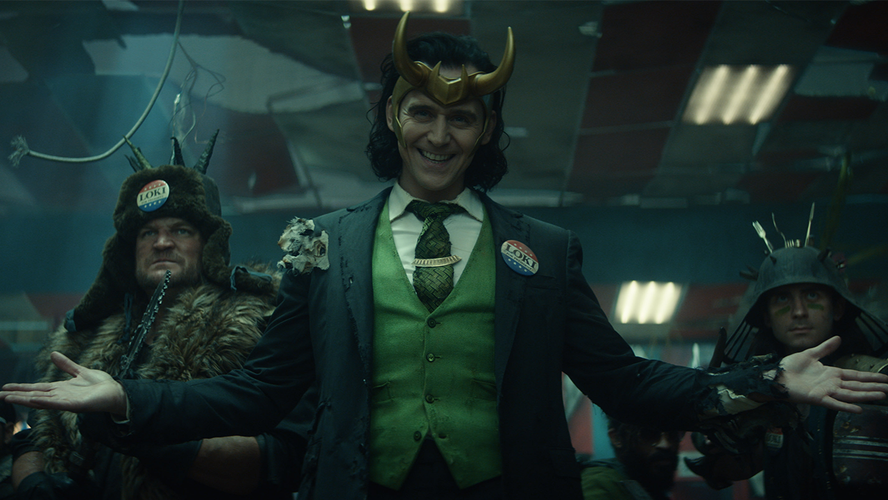 Wilson and Hiddleston have stellar comedic chemistry. The former’s straight-man nonchalance, and his disconnect with the latter’s deluded Shakespearean rants, turns them into a classic two-man act. It’s an amusing routine, though it’s often broken up by dramatic segments which are far less compelling. These scenes, in which Loki is shown footage of his alternate life in prior Marvel films, brings things to a grinding halt in service of showing him a future that no longer exists for him, and it makes the episode feel like a clip show.

While witnessing these failures pokes a hole in Loki’s narcissism, it also leads to a moment of self-actualization that feels too swift and too tactless to have a real emotional impact, i.e. Loki sitting and explaining the real reasons for his actions in the past, rather than his actions in the present reflecting his apparent depth of character. A shame, considering how well some other scenes are able to capture his ethos (like the fun 1970s flashback in which he’s revealed to have been a notorious real-life criminal).

The premiere episode is much more adept at establishing who Loki isn’t, rather than who he is. At every turn, the TVA explicitly and implicitly treats him as if he doesn’t matter in the grand scheme of things, and as if he never did. Judge Ravonna Renslayer (Gugu Mbatha-Raw) serves this function in particular, telling him his story isn’t even his own, and the formality with which she addresses him, “Mr. Laufeyson,” only adds to her smiling condescension as she glares down at him from her bench. Renslayer doesn’t have the lion’s share of the screen time, but her flirty dynamic with Mobius, her subordinate, briefly hints at a much richer history between the two.

The show’s worldbuilding is economic and entertaining, even if its character-building doesn’t quite rise to that level.

Similarly, the TVA’s various references to temporal auras and such hint at a much wider Marvel multiverse outside of what we’ve seen. The show’s worldbuilding is economic and entertaining, even if its character-building doesn’t quite rise to that level. It’s hard to get a read on Mobius, for instance, not because there’s any mystery to him, but because he says things that don’t necessarily add up (he admires Loki in one moment, but doesn’t care about him in the next), and the show, like the majority of the MCU, depends largely on dialogue to reveal its central characters and their stories, rather than how they’re lit or the way the camera captures them.

Outside of its characters, though, the filmmaking creates an especially alluring world. Natalie Holt’s original music runs the gamut from jarring to reflective, and it adds a sense of strangeness and possibility to a show that hasn’t exactly jumped into the deep end with its time-travel premise just yet. Kasra Farahani’s production design is stellar too; each TVA office and hallway has something new to focus on — little details that tell you what kind of workplace it is, even if they don’t tell you much about Mobius himself.

How would you score the Loki premiere? 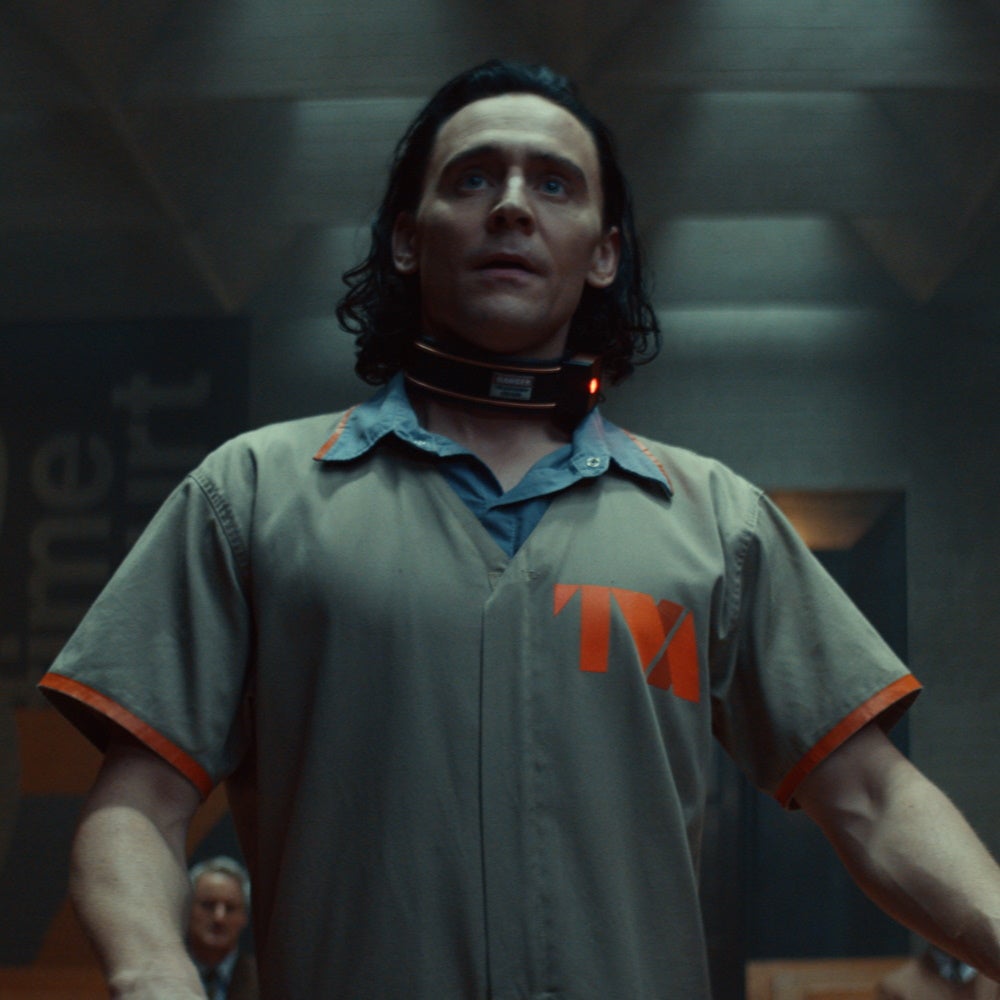 The TVA’s implicit adherence to “the sacred timeline” also makes for an intriguing contrast to Loki’s perspective, which could be mined for future drama. When Loki expands on his speech from The Avengers (“You were made to be ruled”), he extolls the virtues of lesser beings having their paths laid out for them, which circumvents the uncertainty and unpredictability that comes with total freedom. The TVA, similarly, determines a singular path for everyone in the universe, though this comparison is one the show doesn’t really incorporate in any meaningful way, at least not yet. This thematic comparison feels like it ought to be key to getting Loki and Mobius on the same page, though neither character seems to realize the similarity.
Still, by the time the episode ends, the show lays out an exciting dramatic path for future episodes. In an earlier scene, a child witness to a crime points Mobius towards a stained-glass depiction of Satan, which will no doubt get those WandaVision fan theory wheels turning again, vis-à-vis Mephisto. However, the episode also puts an immediate stop to those same guessing games when it comes right out and reveals the series’ time-travelling villain in a fantastic twist, setting up a story where the 2012 version of Loki faces a different path to redemption – or potentially even greater mischief and chaos. That’s an interesting note to end on.
Verdict
Loki’s premiere sets the MCU on a brand-new path, one where Infinity Stones no longer matter and branching timelines and multiverses are the big new threat. The show is an outright comedy — Tom Hiddleston and Owen Wilson have a hilarious on-screen dynamic — but its dramatic moments are hampered by stilted storytelling and an over-reliance on clips from prior films. By the time it reveals its final twist, the show’s premiere episode sets up an intriguing dynamic, and a villain who’s sure to test the God of Mischief like he’s never been tested before