A sleepy wombat has embraced his inner couch potato after enjoying a cheeky nap on a sofa with his koala teddy.

Adorable footage was uploaded to the Wombat Awareness Organisation on Monday showing the wombat named Noah napping at its refuge in Flaxley, South Australia.

‘This is Noah, he is one of our dominant males. He is a very dignified chap and would be so embarrassed that I caught him sleeping in on the lounge,’ the caption read. 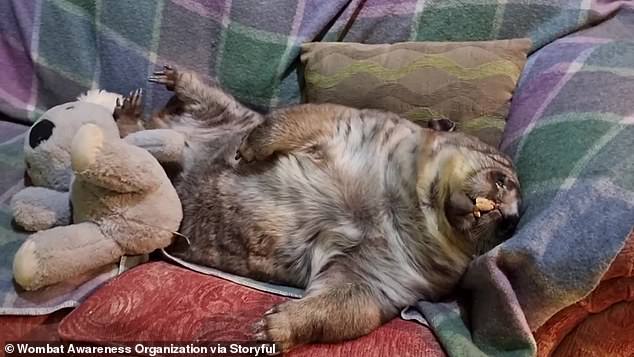 Noah the wombat was caught snoozing on the couch at a sanctuary belonging to the Wombat Awareness Organisation in Flaxley, South Australia (pictured)

His friend, five-year-old Pebbles was also filmed playing on a bed nearby, awake and eager for cuddles.

‘Then there is my darling, darling girl Pebbles who loves to spend all night tucked in bed and all day out in her burrow,’ the caption continued.

‘She is nearly 5 years old and used to suck on my thumb as a kid, she still tries to now.’

The vision has since gone viral generating over 344,000 views and thousands of likes with social media users from around the world smitten over the adorable sight.

‘These animals are so cute, living in the UK I’ve never seen one in real life…It must be so rewarding working with these amazing creatures,’ wrote one user.

‘I wonder what Noah is dreaming about, his little legs suggest he’s busy in his dream,’ commented another. 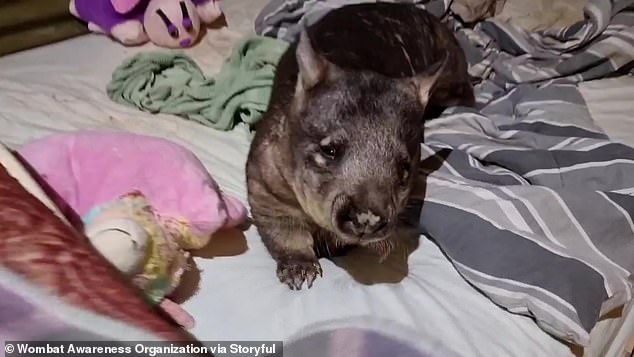 ‘Oh they are too funny and totally gorgeous,’ added a third.

Cuddly Noah was dozing at a sanctuary belonging to the Wombat Awareness Organisation for animals unable to be released back into the wild.

‘They live in a sanctuary belonging to Wombat Awareness Organisation, which is a sanctuary for unreleased wombats,’ Founding Director Brigette Stevens told Storyful.

‘It is also the only free-range wombat sanctuary, meaning that wombats are free to choose how they live here, whether it be inside on the lounge, or out in their burrows.’

They have a backward-facing pouch so when digging it doesn’t gather soil in its pouch over its young.

Although nocturnal, wombats may also venture out to feed on cool or overcast days.

Wombats have distinctive-cube shaped faeces they stack to mark territories and to attract mates.

Wombats are herbivores with their diet including grasses, herbs, bark and roots.

The marsupial prefers to be left alone and can become vicious when feeling threatened.