A 14 year-old boy killed in a crush at a Travis Scott concert has been pictured, with cops also sharing a snap of another unidentified victim’s body in a bid to track his family down.

John Hilgert is the youngest victim of the horrific crush, which killed eight people at Friday night’s Astroworld Festival in Houston.

He was a ninth grader at Memorial High School and was remembered as a talented baseball player, as well as a popular student.

A spokesman for Spring Branch ISD said: ‘Our hearts go out to the student’s family and to his friends and our staff at Memorial. This is a terrible loss, and the entire MHS family is grieving today.

‘Please keep the student’s family in your thoughts and prayers as they face this tragedy. We will make counselors available to students next week to offer any help and support needed.’ 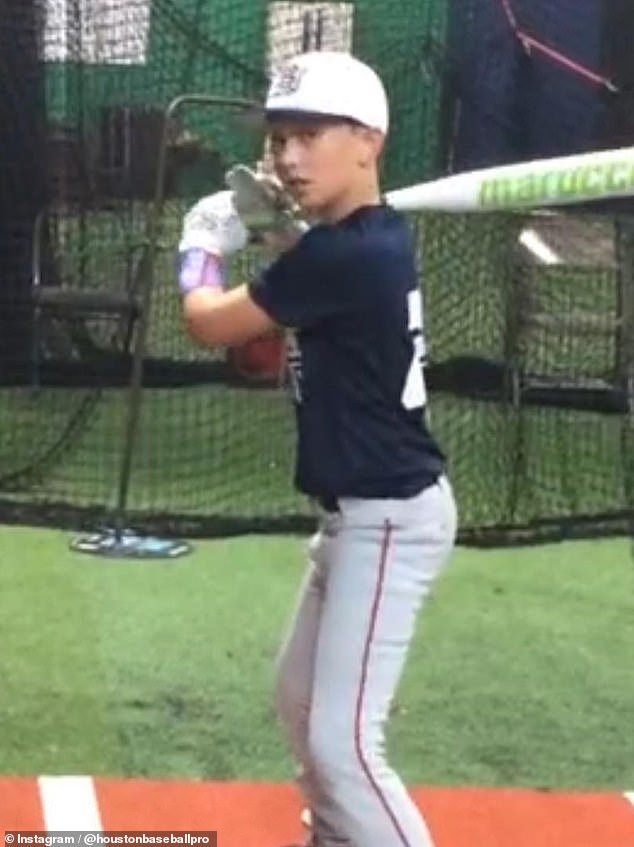 John Hilgert, 14, was the youngest victim of the horrific crush which killed eight people at Friday night’s Astroworld Festival in Houston 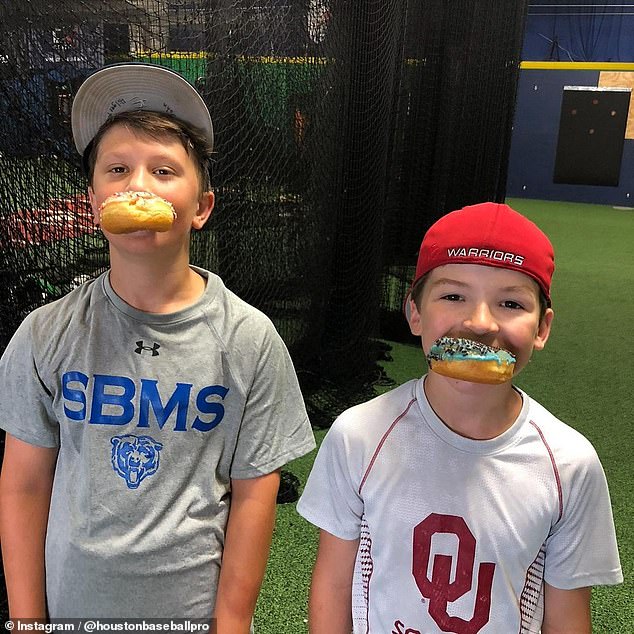 Hilgbert, left, was a ninth grader at Memorial High School and was remembered as a talented baseball player, as well as a popular student

John’s baseball coach Justin Higgs also paid a heartfelt tribute on Instagram. He wrote: ‘RIP John Hilgert. He got the Call up to the Major Leagues by the Almighty! John made an impact on anyone who met him and they always remembered him. I have memories of John I’ll never forget.

‘You had to love the kid. No option not too cause he was who he was. He loved the game if baseball. Was a privilege to coach this young man. Many prayers go out to any of his friends, teammates, and his family… especially Ms. Hilgert.

‘One of the nicest human beings I’ve ever met. John was an Angel the whole time I knew him… impacting others for good and he himself was a legend. The legend of John. Will meet again John. Till then watch over us my friend. Catcher, pitcher, shortstop, great kid. Lived his life to the fullest.’

Hilgert was pictured as Houston’s medical examiner released a photograph of another victim they’re trying to identify, KTRK reported.

The man is believed to be in his early 20s, has short dark hair, a goatee and was wearing white size 11 Nikes. He was six feet two inches tall, and weighed 498 pounds.

That victim was taken to Memorial Herman Hospital in the wake of Friday’s deadly crush. Investigators have yet to say how he died, and have asked anyone with information about his identity to contact the Harris County Institute of Forensic Sciences at 832-927-5000, or 832-927-5001. 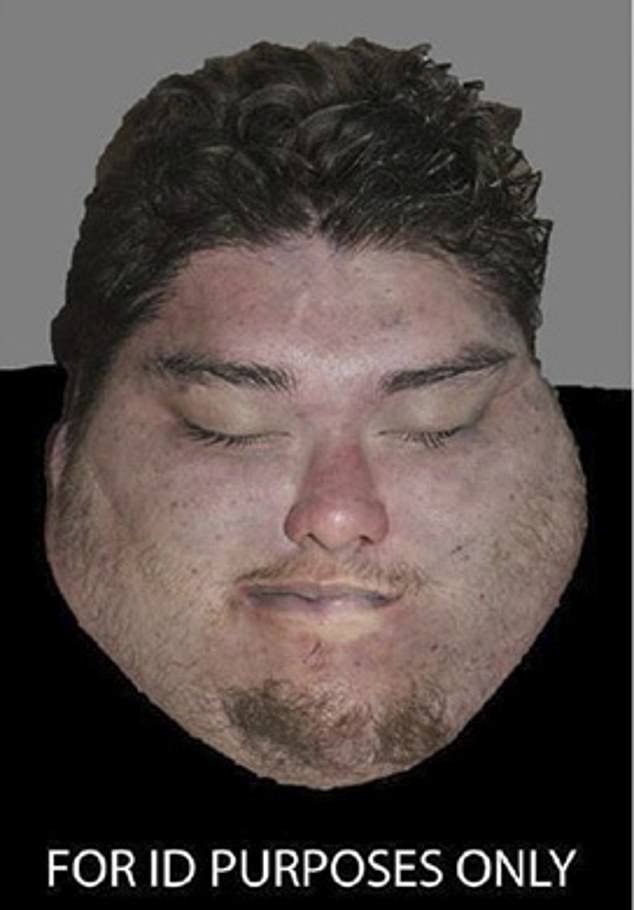 The  Houston medical examiner is asking for the public’s help in identifying this man, who also died at Friday’s Astroworld event. He is believed to be in his early 20s, and was six feet two inches tall, and weighed 498 pounds

The victims, who age between 14 and 27, have been identified as the brother of one of those killed slammed the ‘poorly’ managed event ran by ‘horrible’ people.

Danish Baig, 27, was one of people who died after a surge at the concert. University of Dayton student Franco Patino, 21, a senior, also died at day one of the Astroworld festival at NRG Park in Houston, Texas, the school said.

Baig was killed after trying to save a relative during the stampede at the concert, his brother Basil Baig confirmed on Facebook.

‘My brother was killed in this horrendous Astroworld event that was managed poorly and supervised by such horrible people,’ Basil wrote on Facebook.

He commended his late brother for his ‘courageous act’ and called him a ‘beautiful soul.’

Others whose deaths have been confirmed to various news outlets are 16-year-old Brianna Rodriguez and Rodolfo ‘Rudy’ Peña, 23. 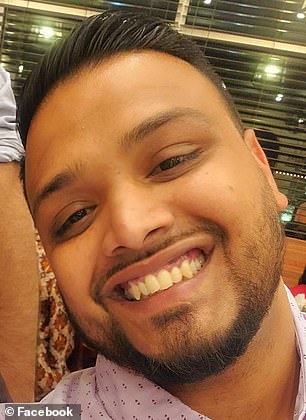 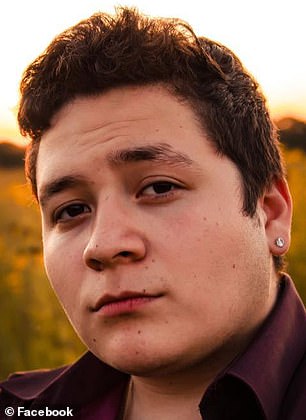 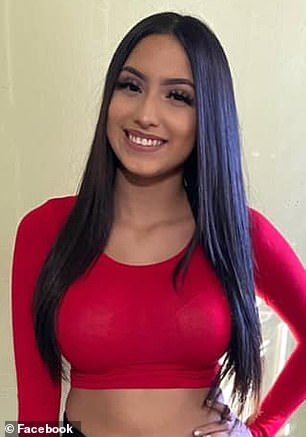 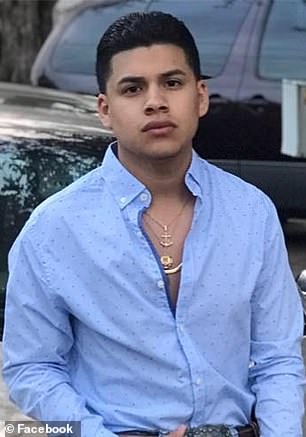 ‘My brother tried to save my sister in law from these horrendous acts that were being done to her in the process he lost his life,’ Basil wrote.

‘My brother Danish Baig [is] a beautiful soul whos[e] smile would light up the room and put everyone before himself. Last night he showed his courageous act to save my sister in law from those horrendous things that were being done.

‘I was there and I wasn’t able to save my brother.’

Basil reported that people were ‘hitting,’ ‘pushing’ and ‘shoving’ and ‘did not care for anyone’s life.’

He also alleged that superstar rapper and baby daddy to Kylie Jenner’s daughter Stormi ‘provoked these people and made them do just that [stampede] and more he called people to the stage to jump into the crowd and did not stop the show.’

Basil also said: ‘This was not the end my family and I will go to the Full extent to make sure he is brought to justice.’ 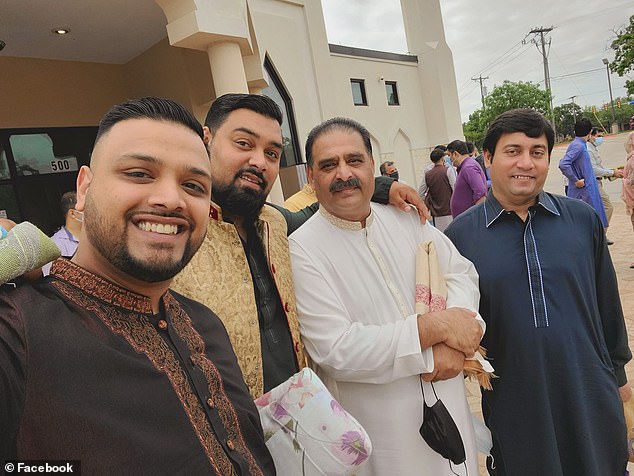 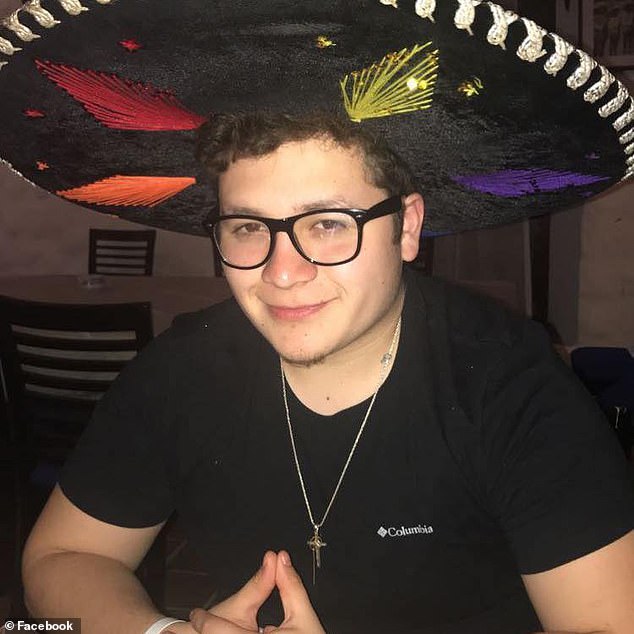 21-year-old Patino was a student at the University of Dayton in southern Ohio, where he studied engineering 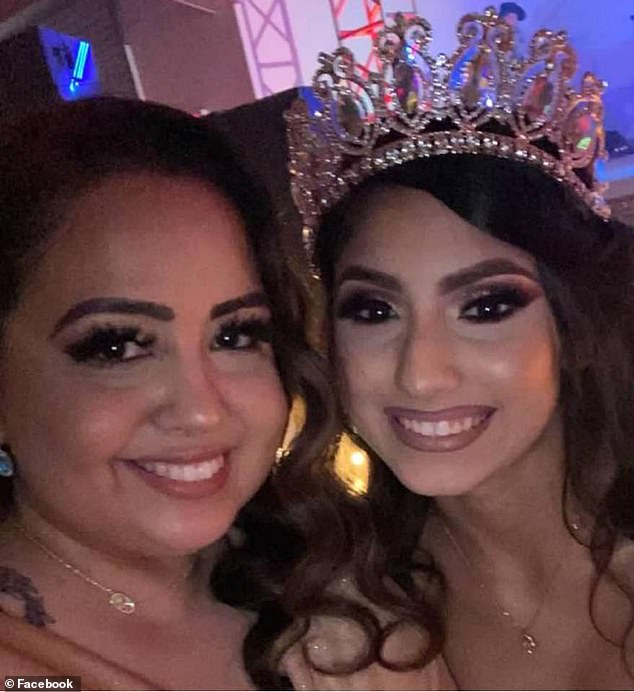 Brianna, pictured with her mother, was killed at the event 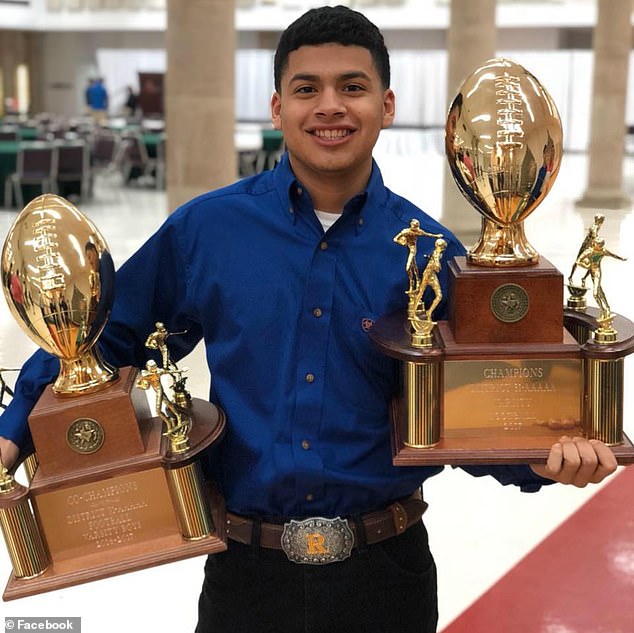 Pena died of cardiac arrest after being injured at the show 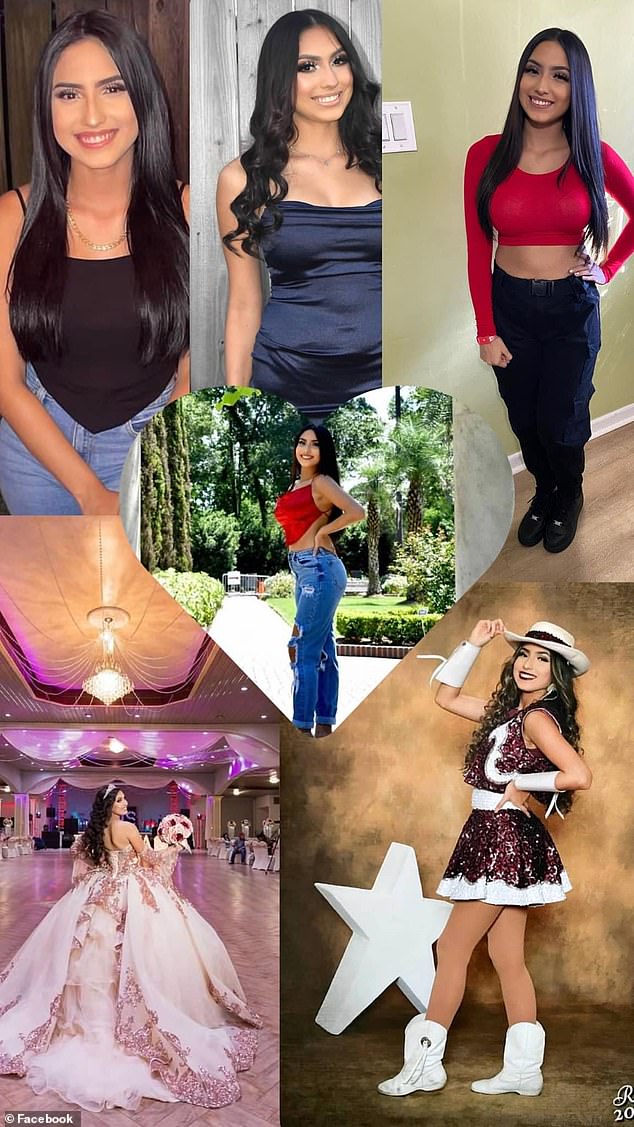 On Saturday, the family of 16-year-old Brianna Rodriguez confirmed that she was one of the eight victims who died

Patino was a huge fan of the rapper and travelled from Southern Ohio to Houston for the event with his best friend to celebrate his friend’s birthday, according to WGN9.

The college senior was studying engineering and was a member of the Society of Hispanic Professional Engineers and the Alpha Psi Lambda.

Patino was a part of the society’s special interest house, which he worked with fellow student Andy Prieto to create.

‘Andy and I worked together day and night to make this dream come true because we believed it was a necessity to have a house for Hispanics to come together and have a little piece of familiar culture in a predominantly white institution,’ Patino said in an article about the society on the university’s website. 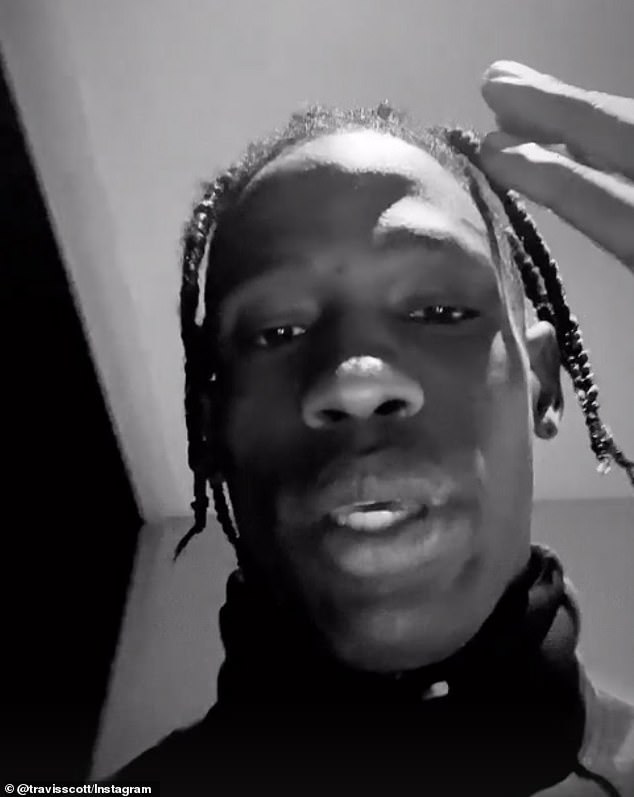 Scott shared a message on his Instagram on Saturday, where he told fans he was ‘devastated’ and was ‘working closely with authorities’

Hendrix’s mother, Tracy Faulkner, bought her son’s ticket it for his birthday and ‘ultimately regrets the decision.’ 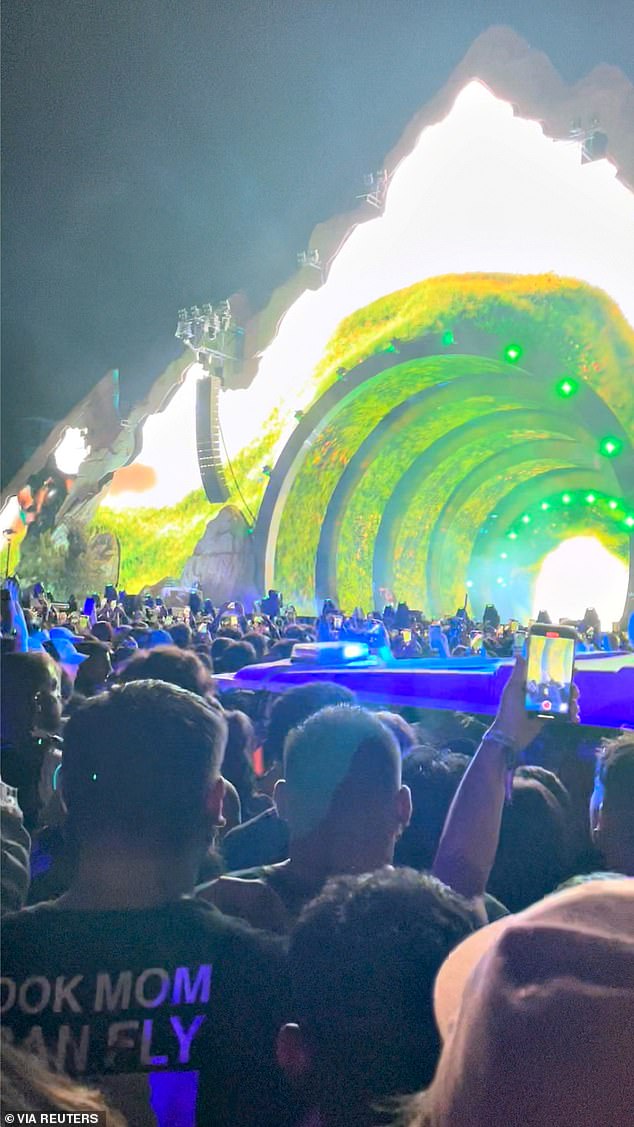 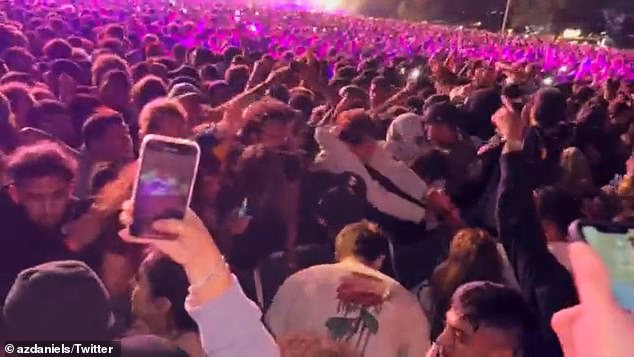 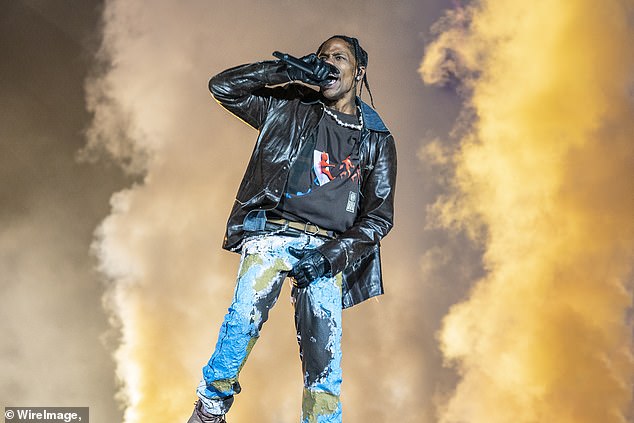 The chaos began after Scott took the stage. The star completed his set

Two others were identified by their families to have died at the tragic event.

Brianna Rodriguez, 16, People confirmed, and Rodolfo ‘Rudy’ Peña, 23, confirmed by the Laredo Morning Times, were among the eight.

Rodriguez was a dancer and a junior in high school.

He drove five hours from Laredo to Houston with his friends to attend the show, where he died of cardiac arrest.

His sister told the Laredo Morning Times: ‘My brother was the sweetest person, friendly, outgoing, he had many friends because he was always there for everyone. Yes, he was a big fan of Travis, he loved his music.’ 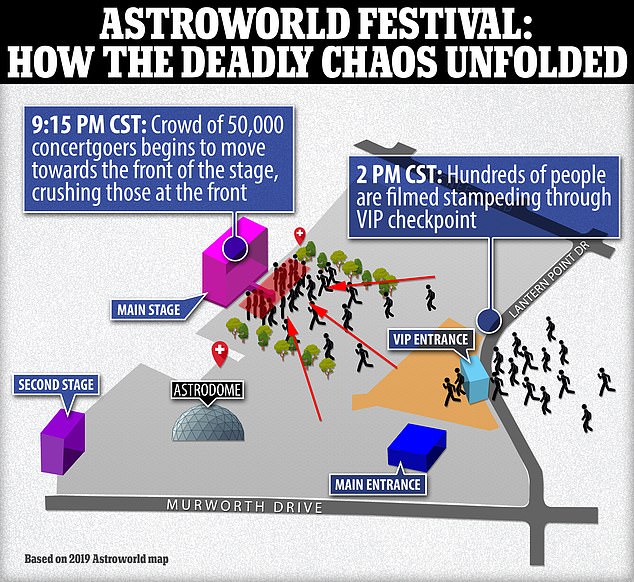 The surge happened at 9:15 p.m. and the ‘mass casualty incident’ was declared at that time. Nearly an hour later, at 10:10 p.m., the concert producer Live Nation halted the show.

Earlier on Friday, hundreds of people were filmed stampeding through a VIP entrance at the Live Nation-organized event, sparking fears of overcrowding and poor crowd control.

Scott, 29, continued to perform after eight people were crushed to death – including two victims aged just 14 and 16 – in what one witness described as a ‘floor of bodies.’

As the chaos unfolded the rapper, who completed his show, even appeared to glance in the direction of passed-out fans as the show went on. Scott halted the performance at least once was filmed calling for security to help distressed fans in the front row.

Houston Mayor Sylvester Turner revealed during a press conference Saturday that the dead ranged in age from 14 to 27. Their cause of death has not yet been determined.

Meanwhile, Scott’s girlfriend Kylie Jenner, who is pregnant with their second child and attended the event, was blasted online for posting a clip of an ambulance tending to the injured and dead as the chaos unfolded.

But other videos from the night showed distraught fans begging concert staff to halt the performance and help people escape the surge.