An air traffic controller ordered a twin-engine aircraft to gain altitude shortly before crashing into two houses and a UPS truck in a residential area north of San Diego on Monday lunchtime.

The explosion which resulted in a massive fireball killed at least two people including the driver and injured two others, sending them the hospital. The extent of their injuries is not clear, though local reports indicate they suffered burns.

The aircraft came down close to the grounds of Santana High School in Santee according to Fox 5 San Diego.

It wasn’t immediately known whether the other victims were on the ground or on board the twin-engine Cessna that went down just after midday in suburban Santee, about 20 miles northeast of downtown San Diego but recordings from air traffic control hear the controller desperately pleading for the pilot to increase altitude in the final moments before the crash.

‘Low altitude alert! Climb immediately!’ the controller advised. The pilot responded but did not appear to be in distress, even agreeing to the request to climb. 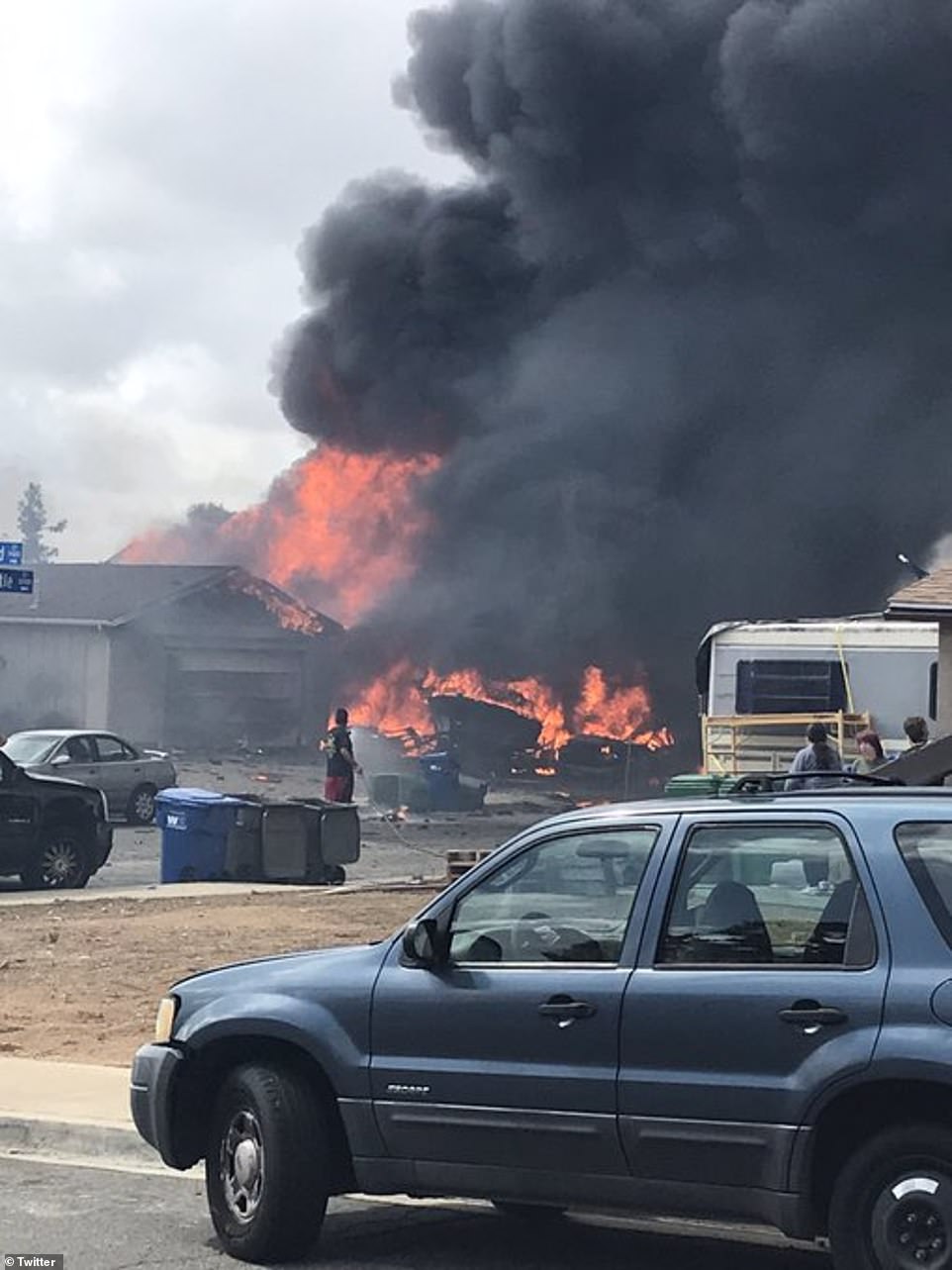 In the moments after the plane crash, shocked neighbors look on as flames consume the houses while one grabs a garden hose in a futile effort to contain the blaze 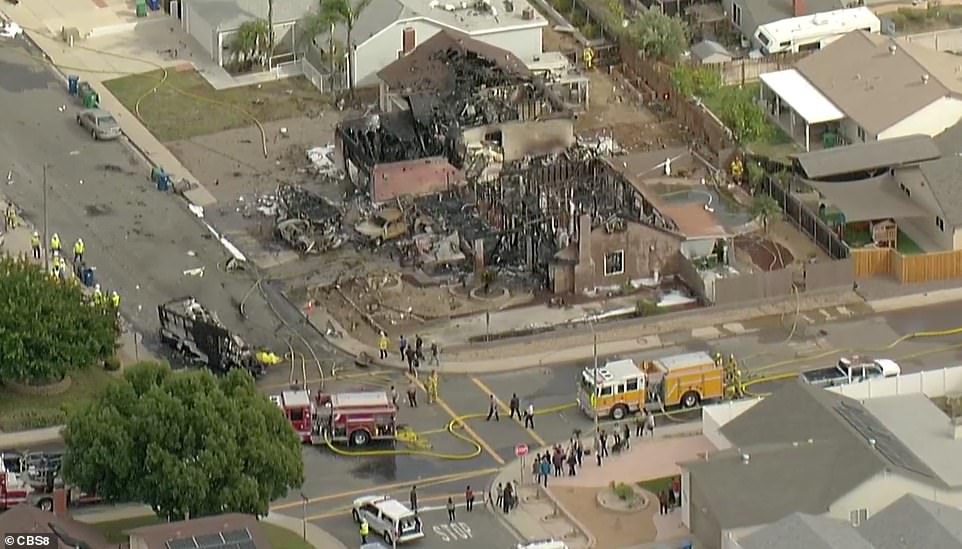 The charred remains of two burnt out houses can be seen from the air together with the remains of a UPS truck, far left 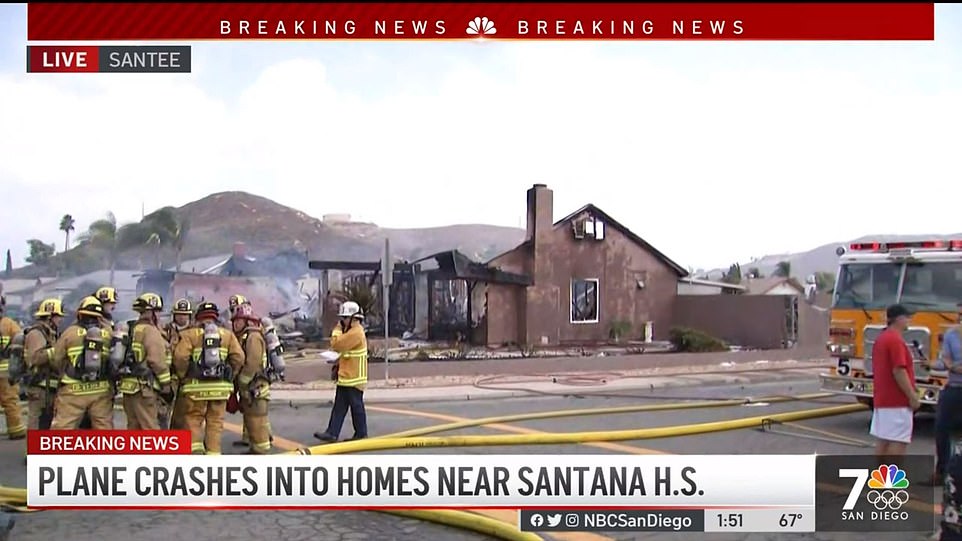 Firefighters respond to the scene of a plane crash in a residential neighborhood in Santee, a suburb some 20 miles northeast of San Diego, California

ATC: Descend 2,800 until established on the localizer for runway 23R.

ATC: Look’s like you’re drifting right off course, are you correcting?

ATC: 2-2-Golf just level out the heading and climb the airplane up to 5,000 when you can please sir.

Authorities began receiving reports of a crash at 12:30pm. The plane is believed to have come down at around 12:15pm.

The flight was on course for Montgomery-Gibbs Executive Airport, six miles north of downtown San Diego when it suddenly veered of course and rapidly lost height.

The Federal Aviation Administration said it did not know how many people were on board the aircraft.

On the ground  it was a scene of carnage straight out of a disaster movie as the blaze destroyed two homes and a delivery truck that was making its rounds.

Shocked neighbors found they could do little to help but wait for the emergency services to arrive. One well-intentioned resident could be seen trying to douse the flames with a garden hose, but it was little use.

‘Not to be too graphic but it’s a pretty brutal scene,’ Deputy Fire Chief Justin Matsushita added.

A UPS vehicle also burned, he said. Firefighters managed to put out the blaze before any other properties were damaged.

The plane was a twin-engine Cessna C340, according to the Federal Aviation Administration. It wasn’t immediately known where the flight originated or was headed, or how many people were on board.

The crash happened about three blocks from Santana High School in the city of about 50,000 residents. The school said on Twitter that ‘all students are secure.’

The FAA and the National Transportation Safety Board will investigate.

The injured were evacuated from the scene by Santee Fire Department near Jeremy and Greencastle Street in Santee.

TV news footage about an hour after the crash showed the fire extinguished and two houses and the truck still smoldering and gutted by flames. 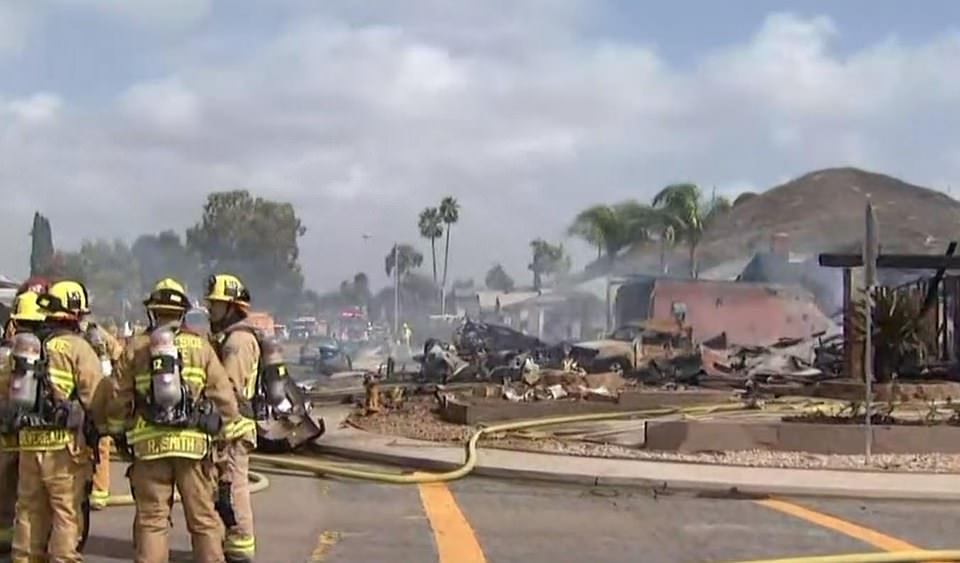 Two homes were destroyed and a third suffered damage after a twin-engine Cessna crashed into the area, according to authorities 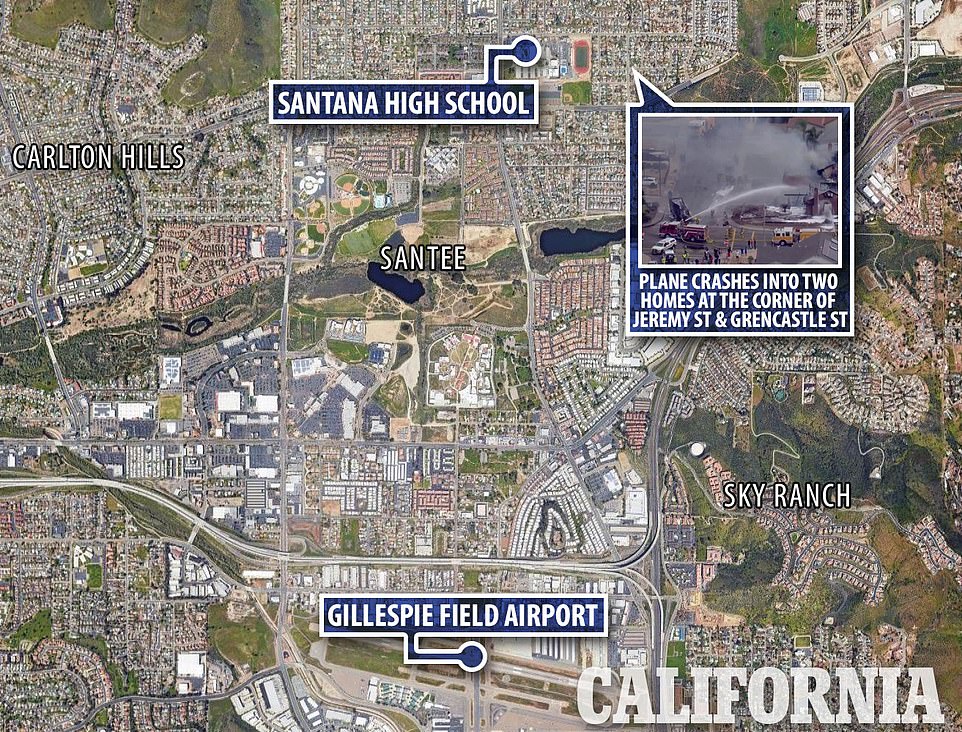 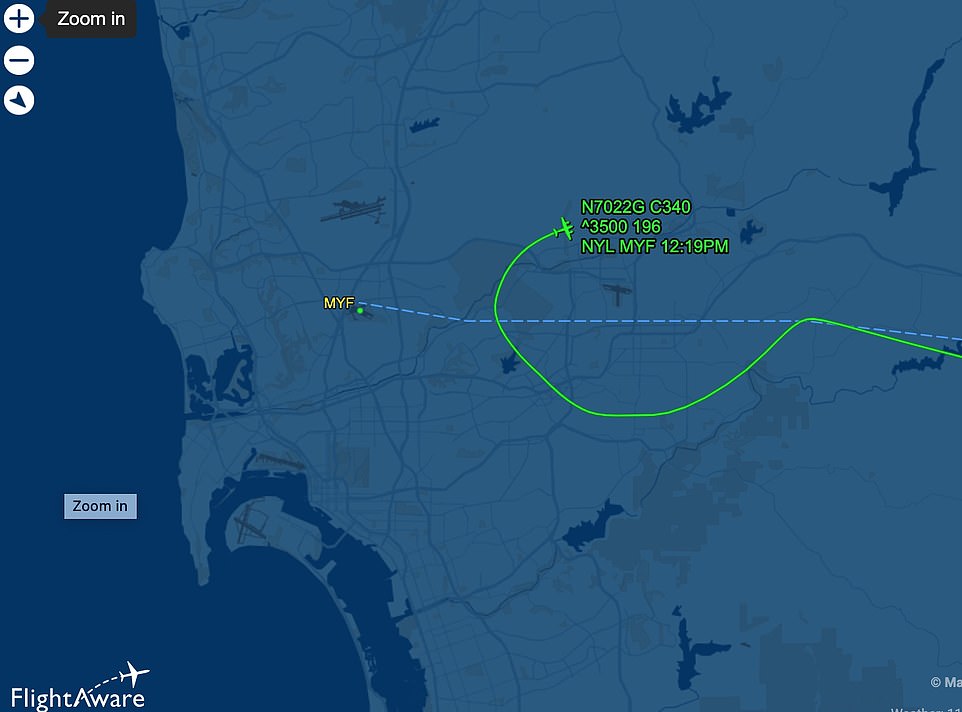 The flight was on course for Montgomery-Gibbs Executive Airport, six miles north of downtown San Diego when it suddenly veered of course and rapidly lost height 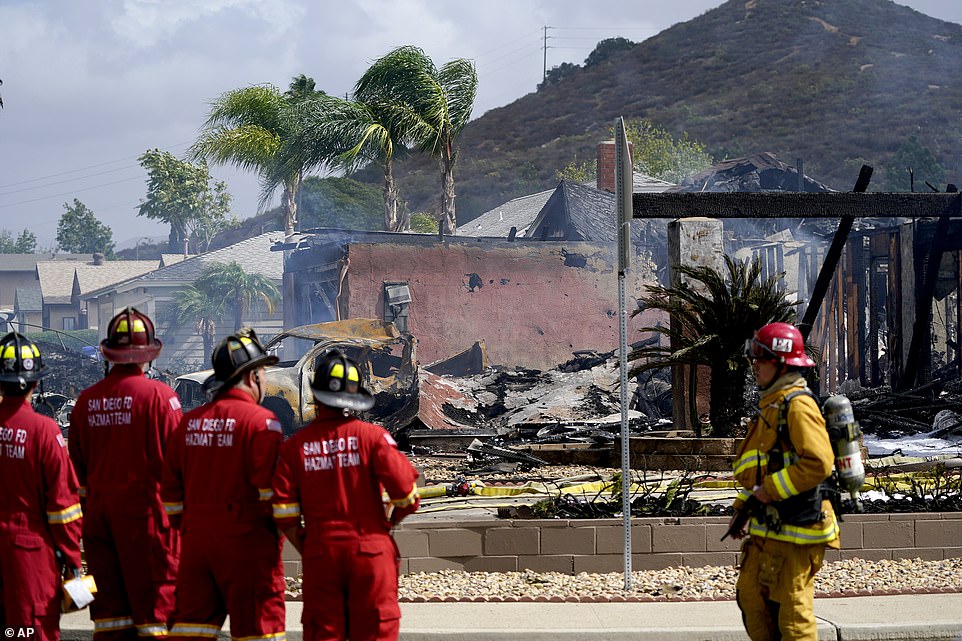 Fire crews work the scene of a small plane crash in Santee. At least two people were killed and two others were injured when the plane crashed into a suburban Southern California neighborhood, setting two homes ablaze 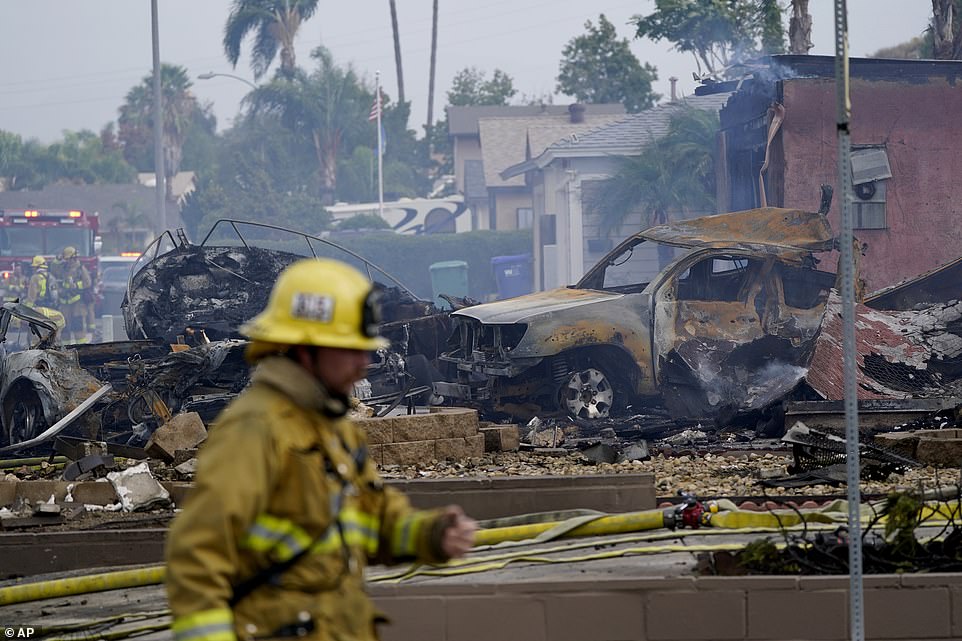 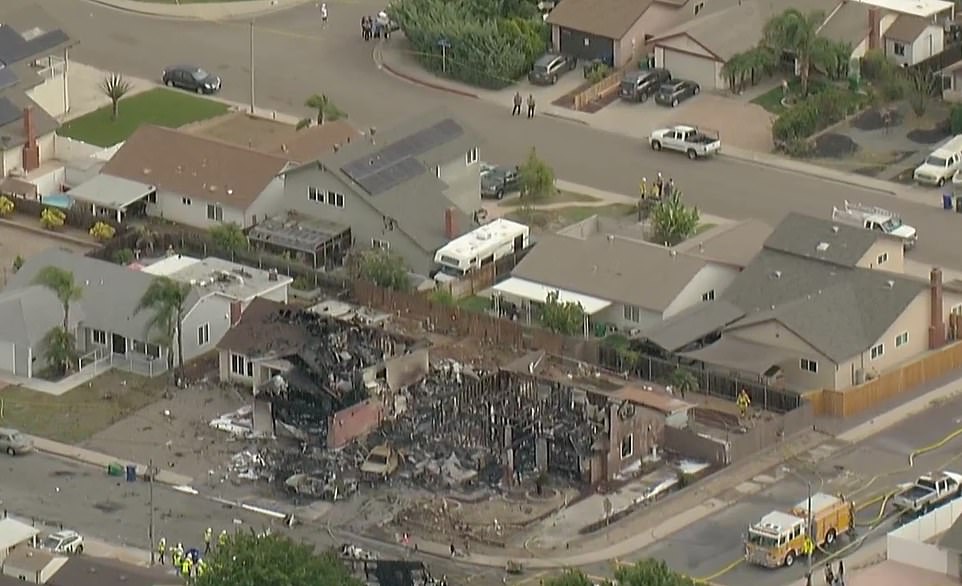 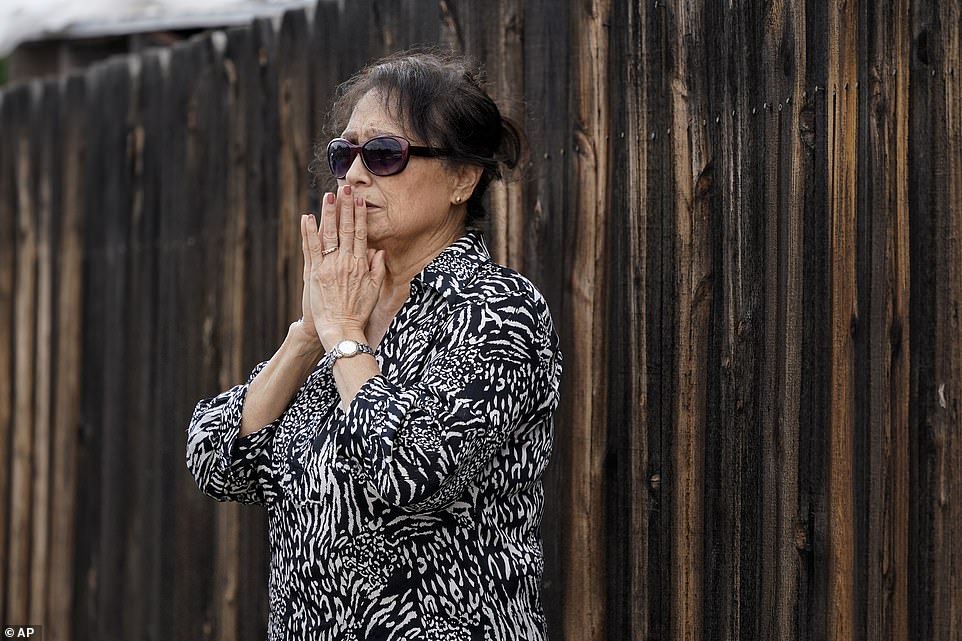 Jim Slaff told NBC 7 in San Diego that neighbors pulled his mother out of a window of her burning home and rescued his stepfather from the backyard. It appears their dog died.

Slaff said neighbors told him the couple was ‘obviously shaken up but doing OK’ and taken to UC San Diego Medical Center. ‘It´s a war zone. It´s not even a house,’ Slaff said after arriving at the scene. 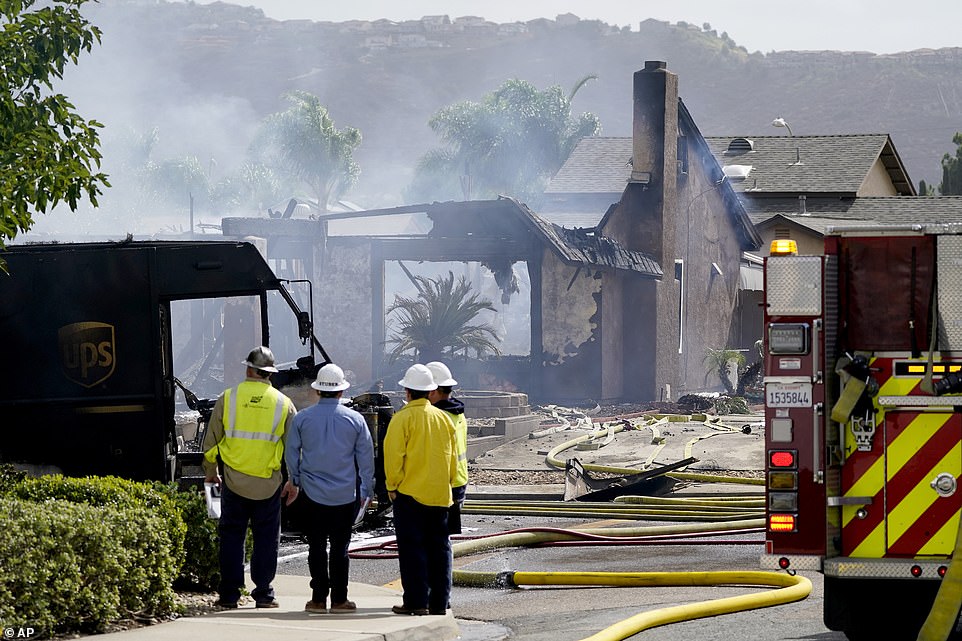 Fire and safety crews work the scene of a plane crash in Santee, California. At least two people were killed and two others were injured when the small plane crashed into a suburban Southern California neighborhood, setting two homes ablaze 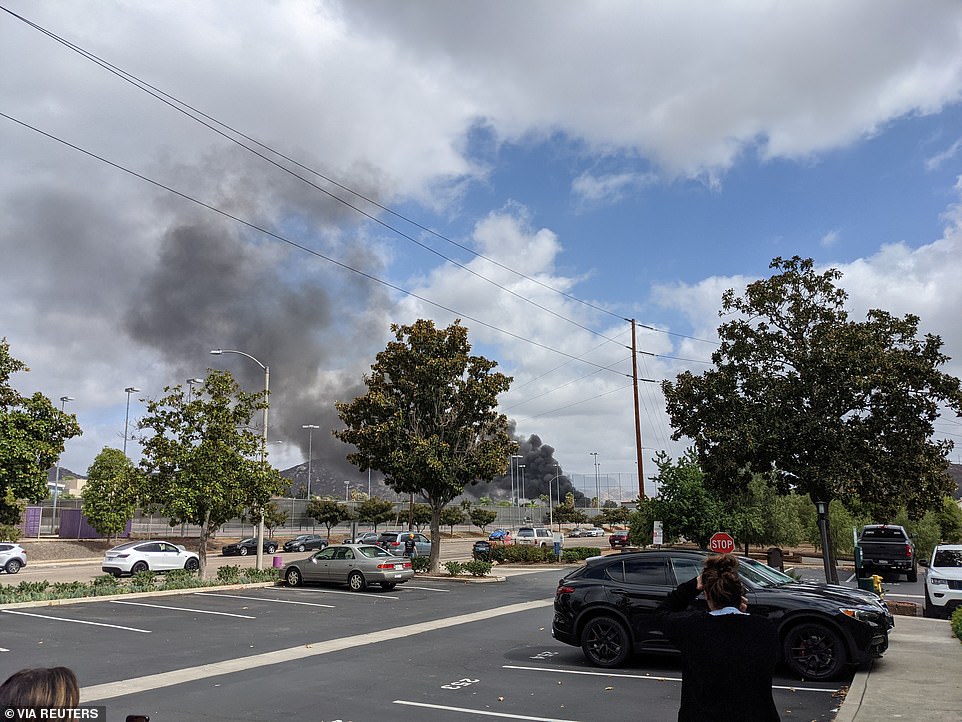 Smoke billows after a plane crash in Santee, California on Monday lunchtime 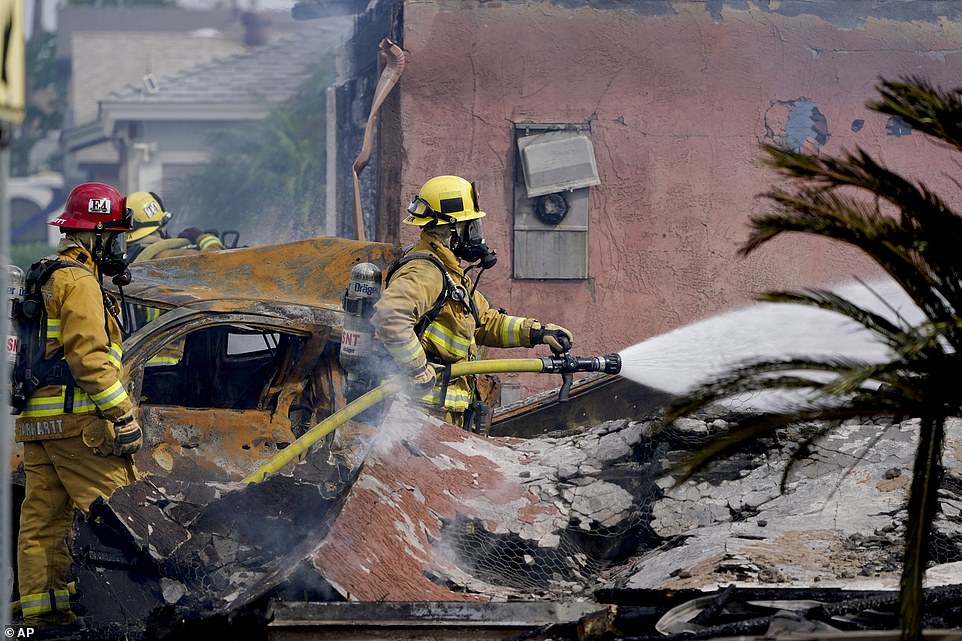 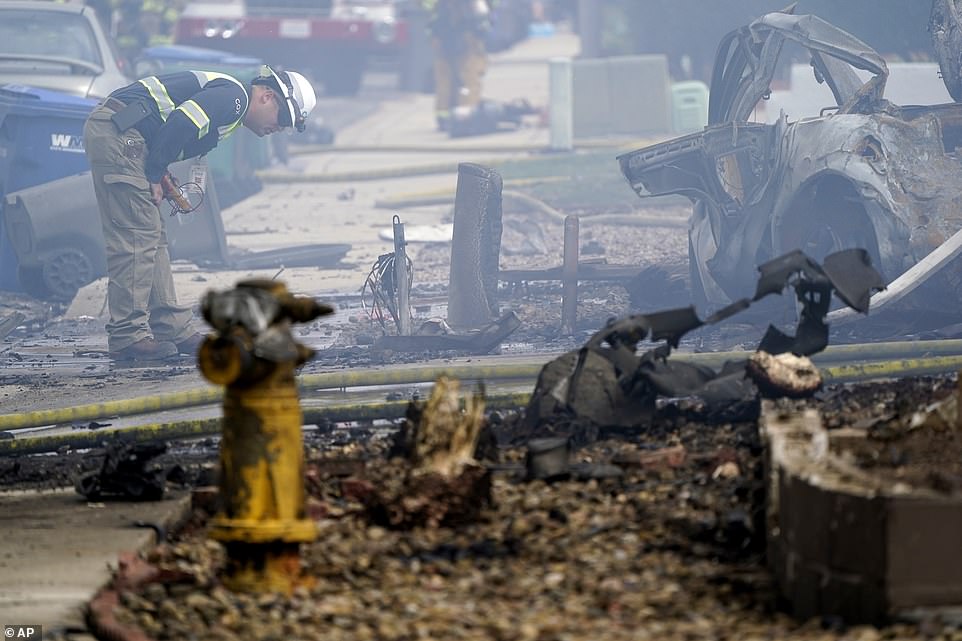 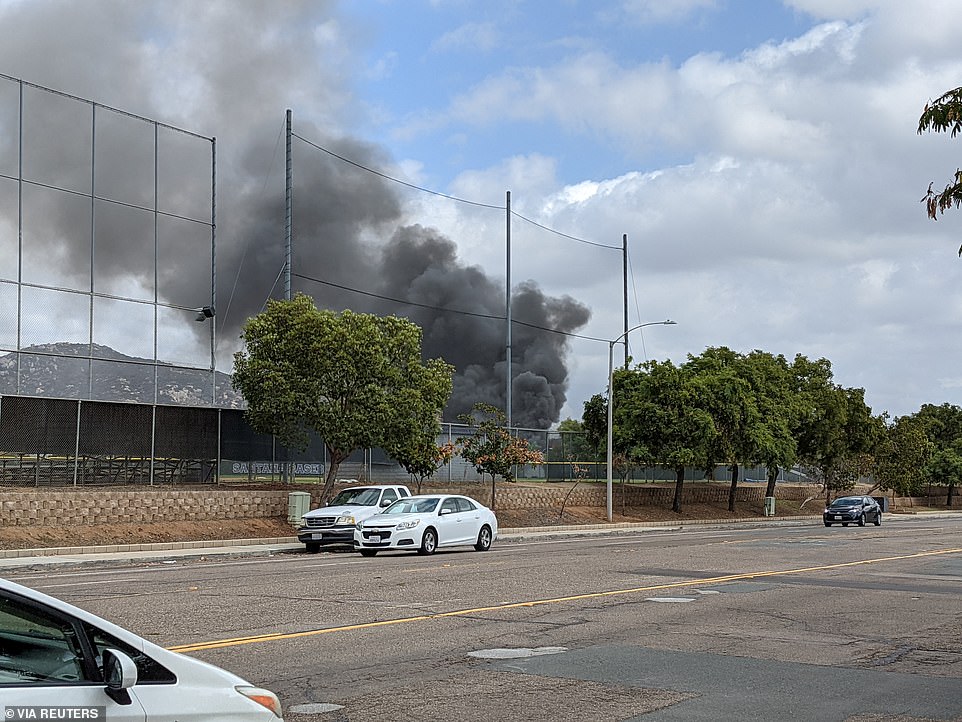 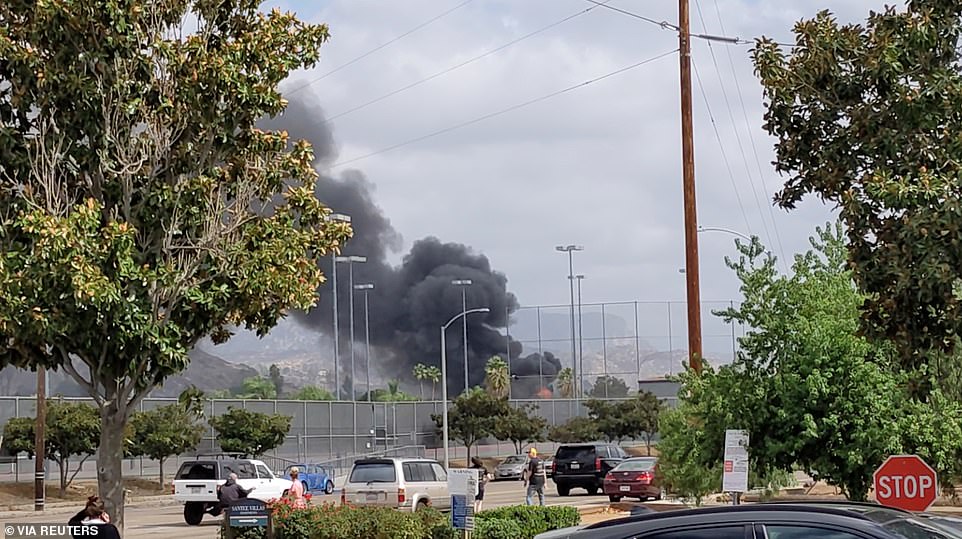 The school, which is part of Grossmont Union High School District, is just north of the airport at Gillespie Field.

The sheriff’s department is asking locals to avoid the area so that first responders can secure the scene.

We can confirm that a small plane smashed into a UPS truck, killing the driver, then crashed into two homes in Santee. No word on the condition of anyone in the homes or who was on the plane. @CBS8 https://t.co/UGUxEGWV9A 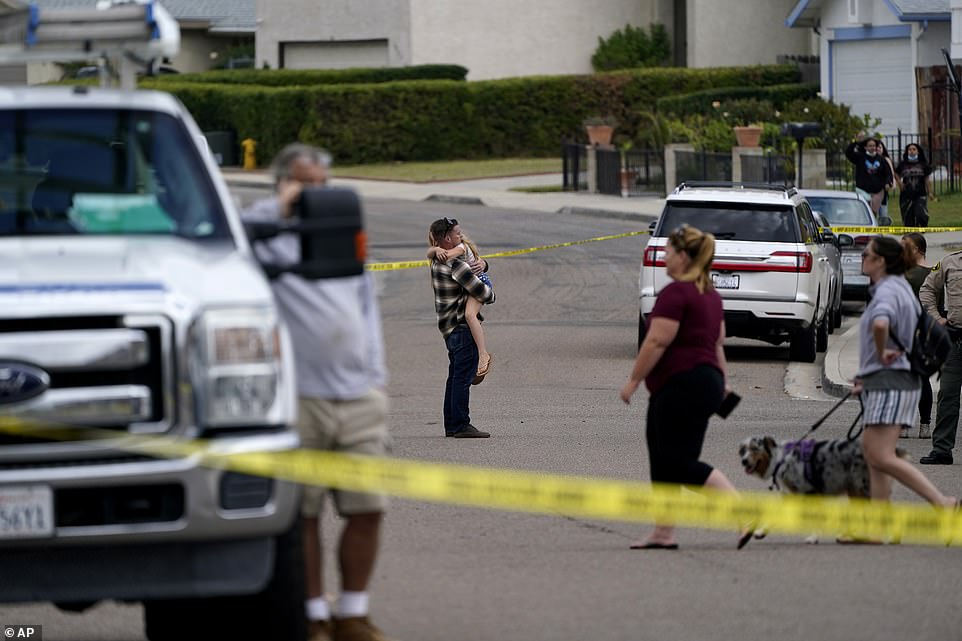 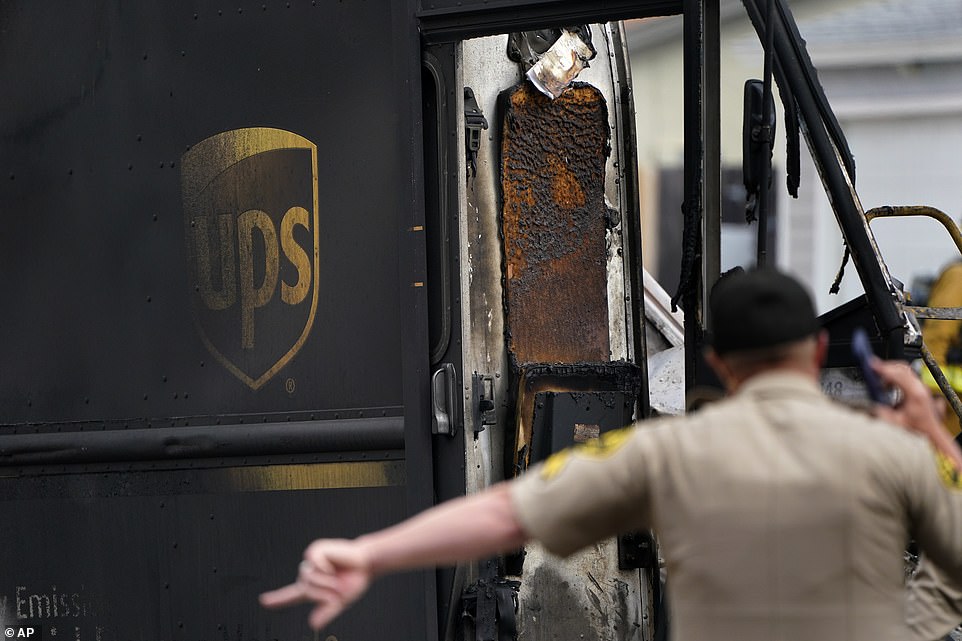 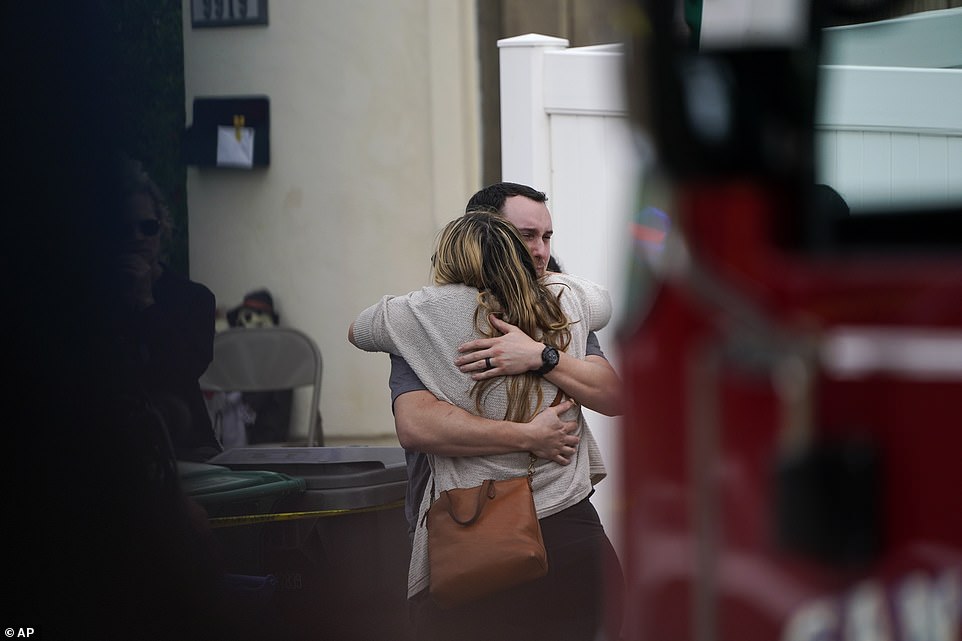 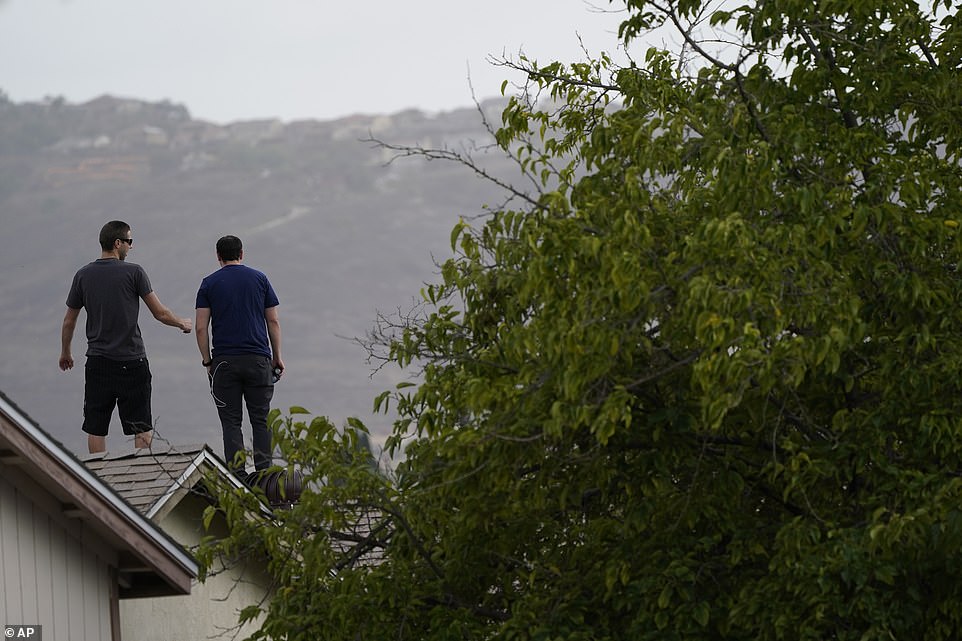 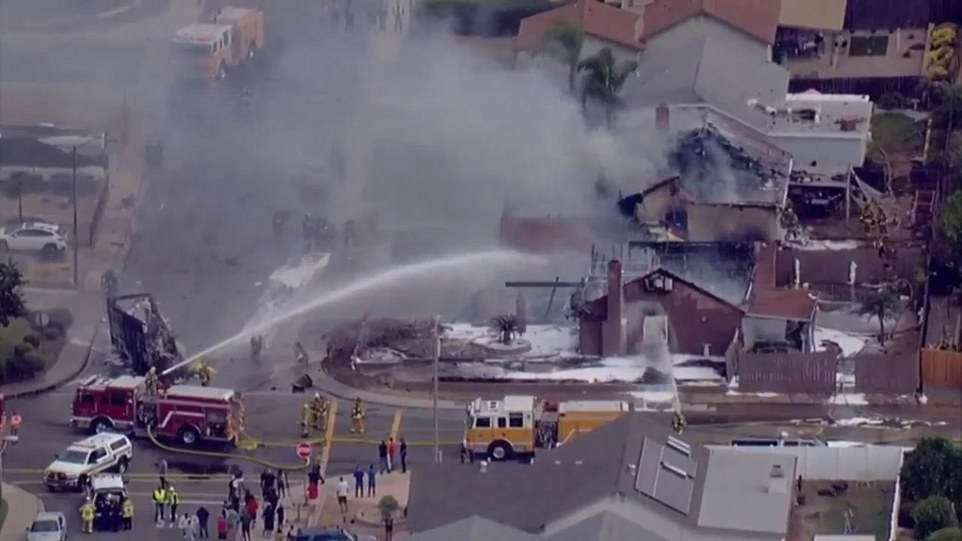 Firefighters in the San Diego suburb of Santee, California are at the scene of a small plane crash near a high school on Monday 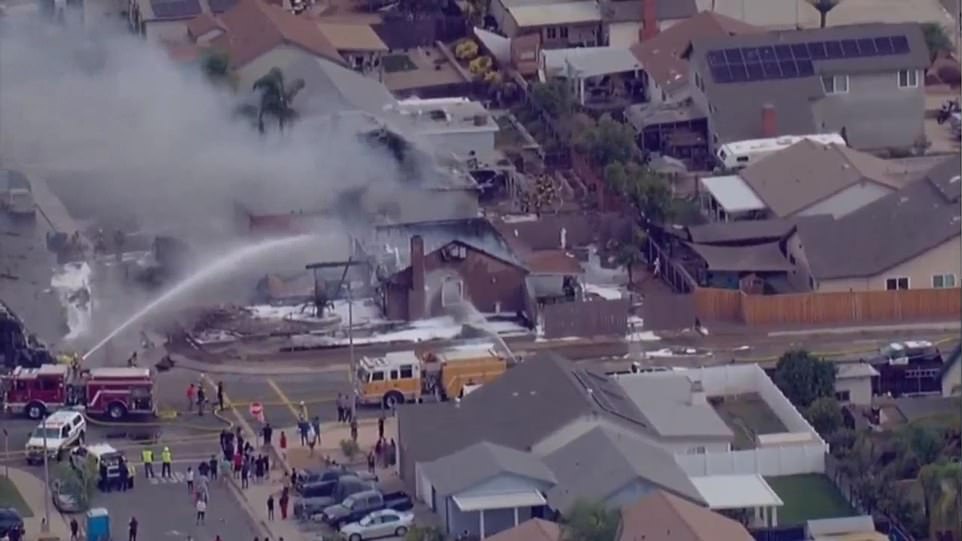 At least two people were rushed to hospital with injuries. The injured were evacuated from the scene by Santee Fire Department personnel near Jeremy and Greencastle Street in Santee 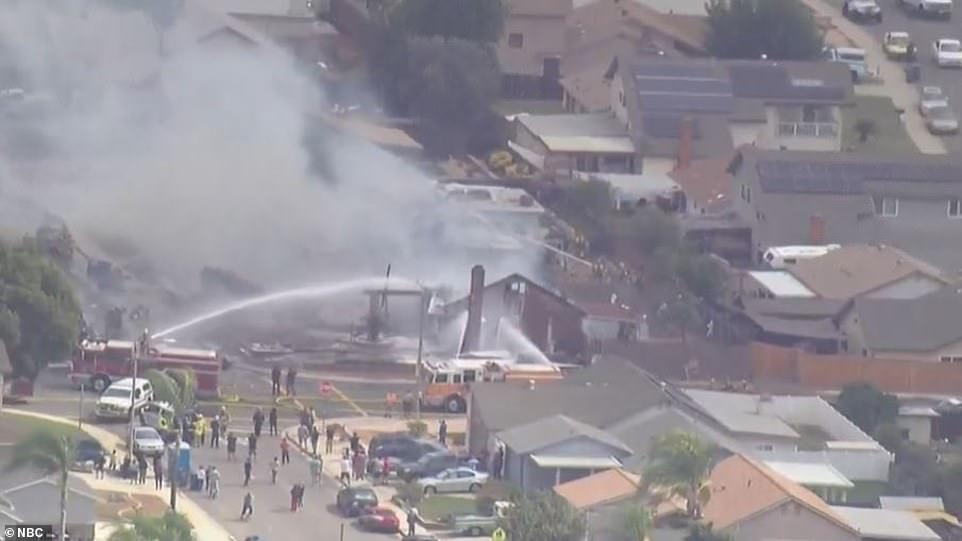 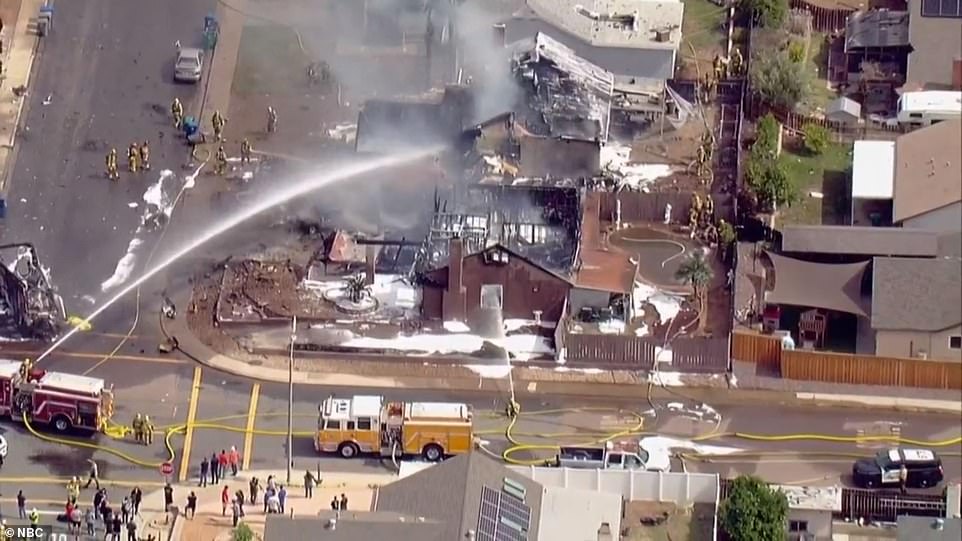 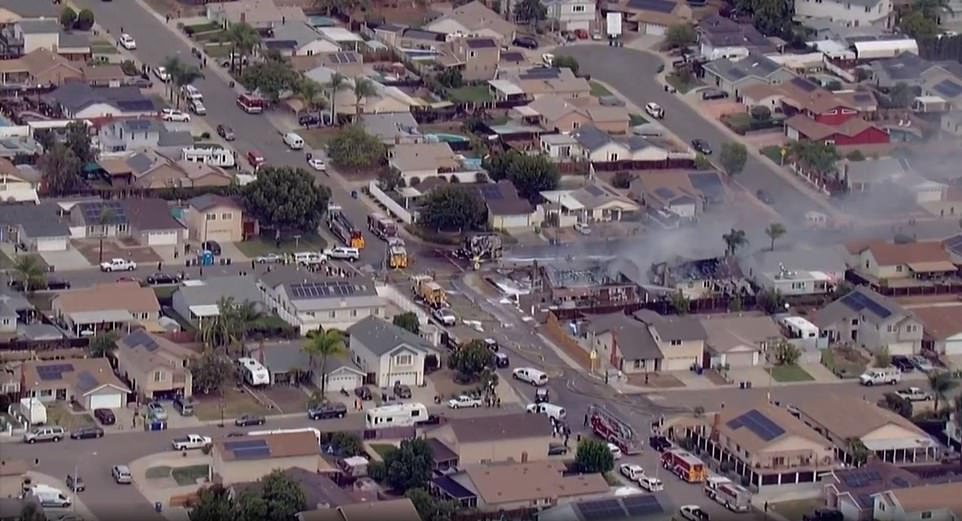 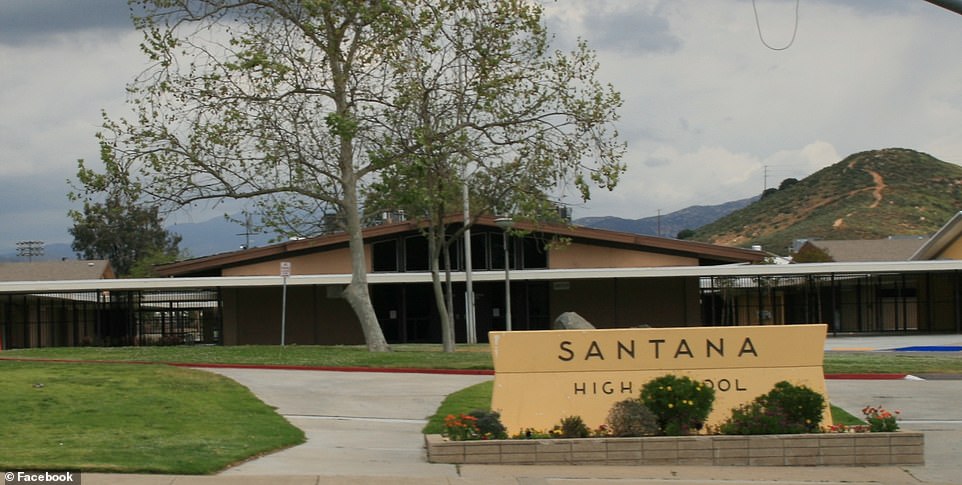 The image above is a file photo of Santana High School, just a few blocks from where the plane crashed on Monday afternoon

The school, which is part of Grossmont Union High School District, also is just north of the airport at Gillespie Field. Its official Twitter account reported that its students were ‘secure’ following the crash, which took place about ‘2 or 3 blocks away.’ 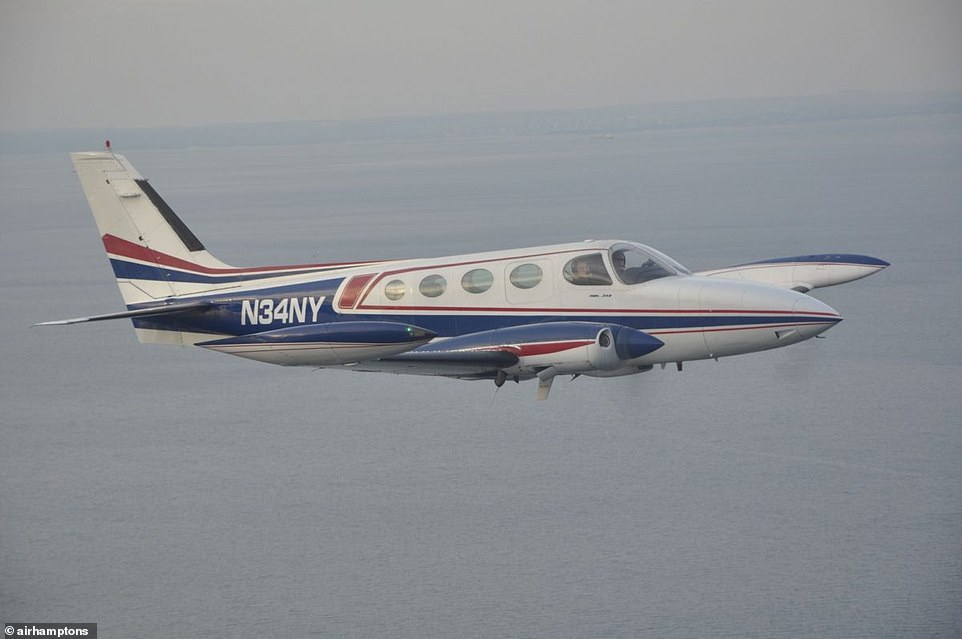 It is also unclear if those injured were in the plane, a twin-engine Cessna C340, or on the ground at the time of the crash. The above image is a file photo of a Cessna 340

Just before 1pm local time, school officials tweeted: ‘We have been given the OK by @SDSOSantee to come out of ‘Secure Campus.’

‘We are now out of a ‘Secure Campus’… Students are being released for lunch or dismissal, if they do not have any other classes today.’