Police across America brace for unrest over Rittenhouse acquittal
Advertisement

America is bracing for the possibility of a night of unrest after Kyle Rittenhouse was found not guilty on all counts, a decision that has stunned politicians and enraged liberals who wanted him jailed for the rest of his life.

The trial captured the nation and as it played out on TV, tensions were rising but contained. They exploded on Friday afternoon as the jury acquitted Rittenhouse on all counts and now, there are widespread fears of how the country, particularly liberal, urban areas, will react.

In Kenosha, there are 500 National Guard troops on stand-by but there are also fears for how outraged citizens in other major cities like Portland, New York, Seattle and Chicago, will react.

All of those cities – and more – saw violent protests last year at the height of the BLM movement that triggered the riots Rittenhouse found himself in on August 25, 2020.

Sergeant Betsy Brantner-Smith, a retired 20-year veteran from a Chicago area police force and the spokesperson for the National Police Association, told DailyMail.com on Friday that all of the ingredients for chaos are present; the combination of a late Friday verdict, which will likely result in more people protesting than had the verdict been mid-week and earlier, and because a large portion of the country still believes Rittenhouse to be guilty despite him being found innocent.

‘There is going to be some consternation about this verdict and it’s largely based on a misunderstanding of the justice system and the law.

‘My first move would be to engage with the community to make sure people do have a place to protest peacefully, but parallel to that I would make it very clear that we’re going to have zero tolerance for violence, looting and arson.

‘We have got to make that clear,’ she said. 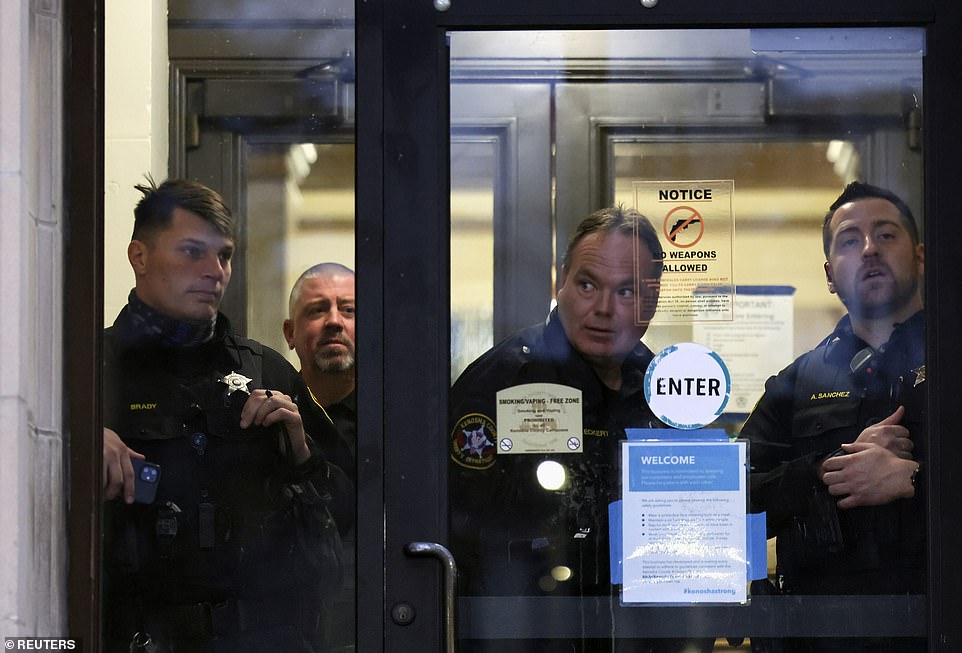 Police peer out the door of the Kenosha County Courthouse after the third day of jury deliberations on the Kyle Rittenhouse trial ended without a verdict, in Kenosha, Wisconsin, U.S., November 18, 2021 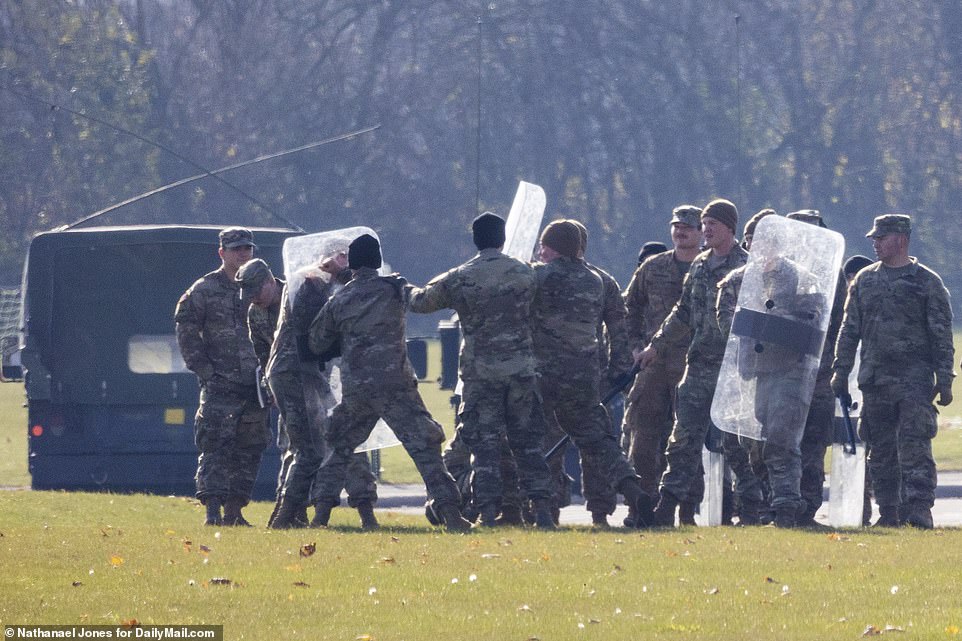 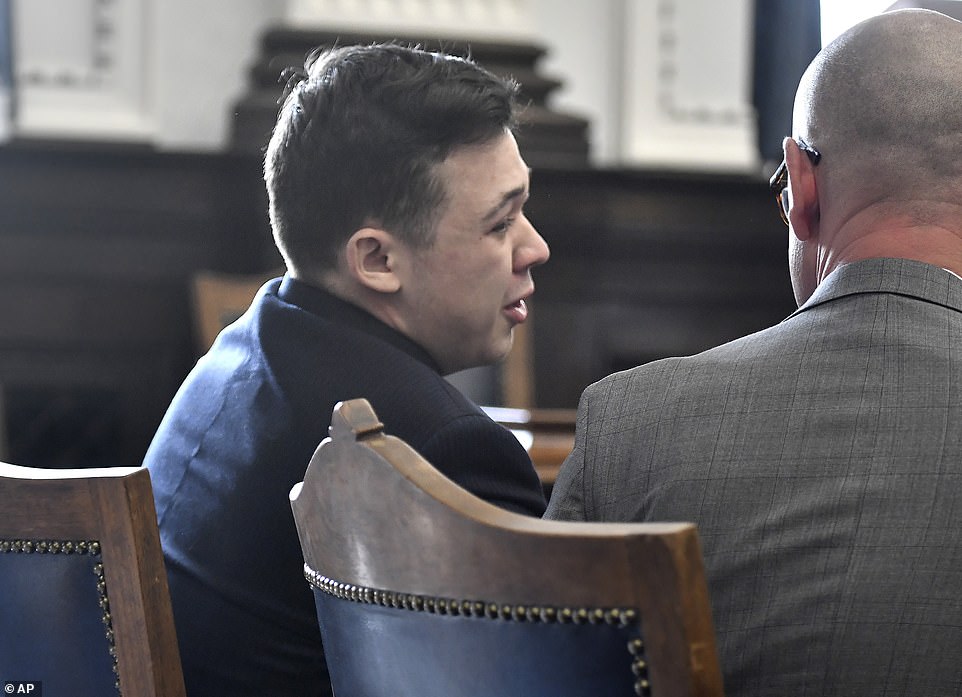 Kyle Rittenhouse, left, collapses to his chair and cries after he is found not guilt on all counts at the Kenosha County Courthouse in Kenosha, Wis., on Friday, Nov. 19, 2021. The jury came back with its verdict after close to 3 1/2 days of deliberation 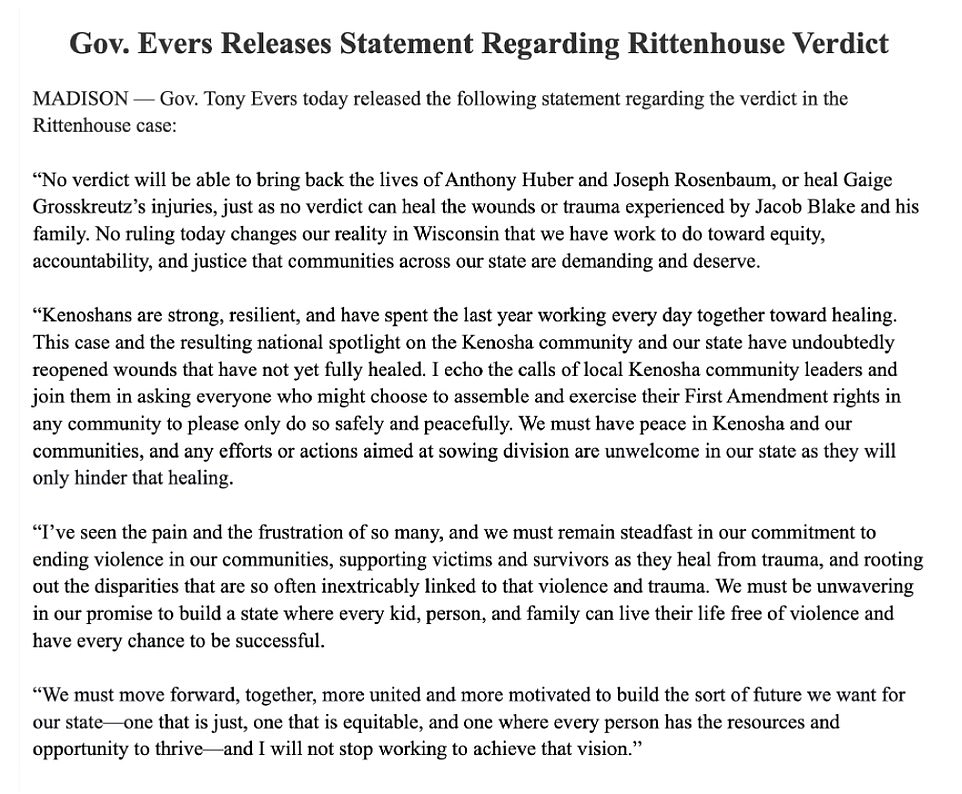 ‘We cannot tolerate a national temper tantrum over a trial verdict,’ she said.

She added that particularly in major cities like ‘Chicago, Portland, New York and Seattle’, police forces must watch carefully and respond quickly.

‘There is going to be some consternation…In some areas, I think violence is likely. Possibly tonight. The problem is that we’re going into the weekend – it’s Friday night

One major issue is that the verdict came back on a Friday afternoon, which she says is more conducive to violent unrest.

‘In some areas, I think violence is likely. Possibly tonight. The problem is that we’re going into the weekend – it’s Friday night.

‘There are going to be some opportunistic people who are going to stir up violence and we have to not tolerate that.

‘First of all, it’s late in some areas, on the east coast, we’re going towards the evening.

‘It’s fall, so it gets darker sooner and it’s always easier to commit crimes under the cover of darkness. It makes it more dangerous for law enforcement and businesses.

‘When we go into the weekend, people have the weekend off and people who might not have wanted to get involved in a violent riot because they have work the next day may be more likely to say “well I’m going to go down there and see what’s going on.”

‘Things have always been a little more dicey on the weekends. It depends on weather, and the sentiment of the local leadership.’

Wisconsin Governor Tony Evers released a statement on Friday afternoon where he didn’t comment on whether or not he agreed with the verdict, but urged calm. 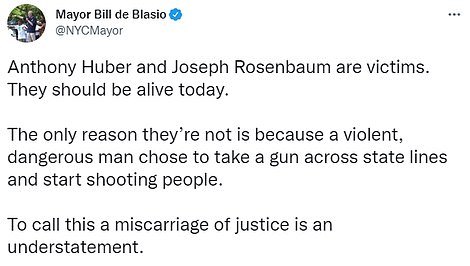 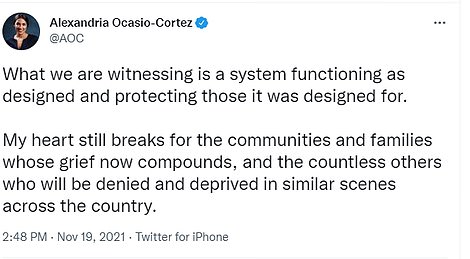 NYC Democrats were among those to quickly denounce the verdict. President Biden said: ‘The system works, we have to abide by it’

‘We must have peace in Kenosha and our communities, and any efforts or actions aimed at sowing division are unwelcome in our state as they will only hinder that healing.’

Officially, the police departments are staying quiet on how they are preparing, likely to avoid tipping off any crowds of protesters.

In America’s Democratic cities, there are yet to be calls for any calm.

Instead, Mayor Bill de Blasio in New York City tweeted of the verdict: ‘Anthony Huber and Joseph Rosenbaum are victims. They should be alive today.

‘The only reason they’re not is because a violent, dangerous man chose to take a gun across state lines and start shooting people.

‘To call this a miscarriage of justice is an understatement. The far-right trolls who think it makes a difference whether a violent gunman got his weapon before or after he crossed state lines are missing the point: two people are dead and their killer is left unaccountable.

‘That’s not justice and they know it,’ he said.

There has also been no word from the White House on the need for calm tonight and over the rest of the weekend but President Biden said: ‘I stand by what the jury has to say. The jury system works.’

AOC tweeted: ‘What we are witnessing is a system functioning as designed and protecting those it was designed for.

‘My heart still breaks for the communities and families whose grief now compounds, and the countless others who will be denied and deprived in similar scenes across the country.’

Chicago PD sent a memo to officers last week notifying them that one of their days off this weekend had been canceled, claiming it was due to ‘current crime patterns’ in the city.

Fraternal Order of Police President John Catanzara claimed it is in anticipation of ‘upheaval’ from the Rittenhouse trial.

Other departments in major cities have been tight-lipped on whether they anticipated trouble, and what they are doing – if anything – to offset it. 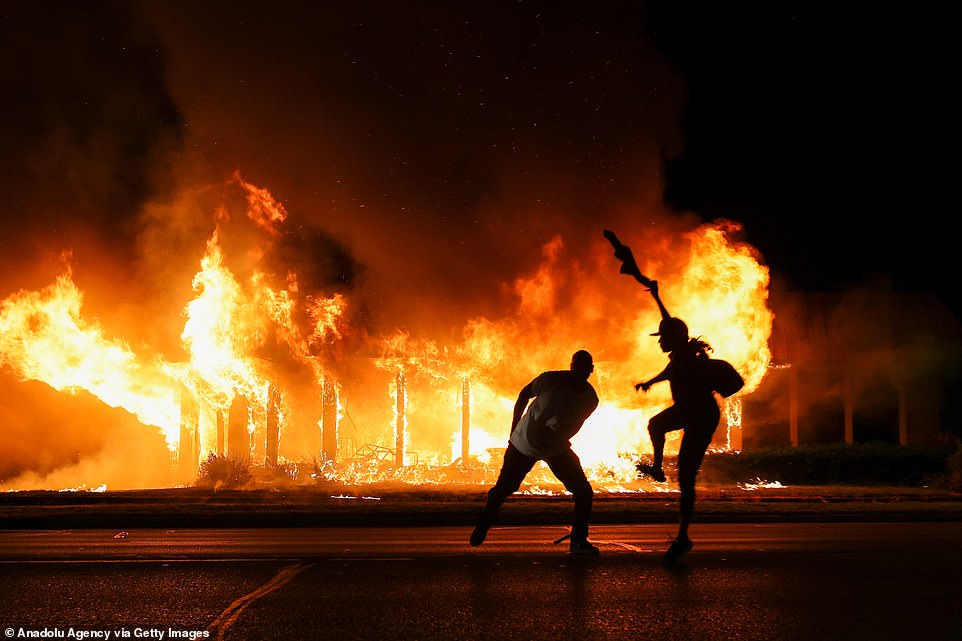 August 24, 2020: Rioters set fire to buildings across Kenosha, destroying over 100 businesses and causing $50million in damage, between August 24 and August 28 after Jacob Blake was shot by a white cop

The LAPD refused to reveal whether or not any special preparations had been made because of the trial when contacted by DailyMail.com.

All a spokesman would say was: ‘The Los Angeles Police Department will have sufficient amount of officers in an event if anything arises.’

Portland Police Department, which was almost disbanded entirely by BLM and now only has 788 officers, told DailyMail.com it was ‘monitoring’ the situation but hadn’t yet deployed any extra resources.

‘PPB is monitoring the situation and will deploy resources if needed based on information available,’ a spokesman said.

‘MPD maintains a level of preparation that would allow it to respond appropriately to any emerging concerns that may arise should it become necessary.’

Kyle Rittenhouse is found NOT GUILTY on all counts