Although delivered by Dishi Rishi, we’re told this was Boris Johnson‘s Budget.

To my ears, it sounded more like the work of Carrie Antoinette.

When the dust settles, it’s going to take more than a few pence off sparkling wine and draught beer to ease the pain.

After the event, the Prime Minister and his Chancellor went through the motions, posing with a couple of pints at a London brewery to highlight the reform of alcohol duties.

Neither of their hearts seemed to be in it, and not just because Sunak is a strict teetotaller. We’re all going to have a bitter taste in our months once the fiscal measures announced on Wednesday begin to bite. And they both know it. 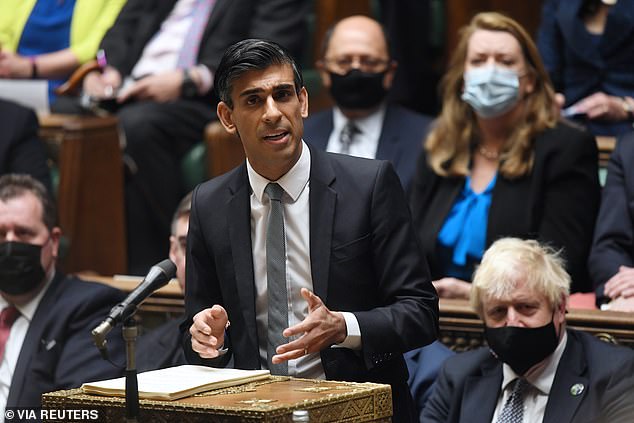 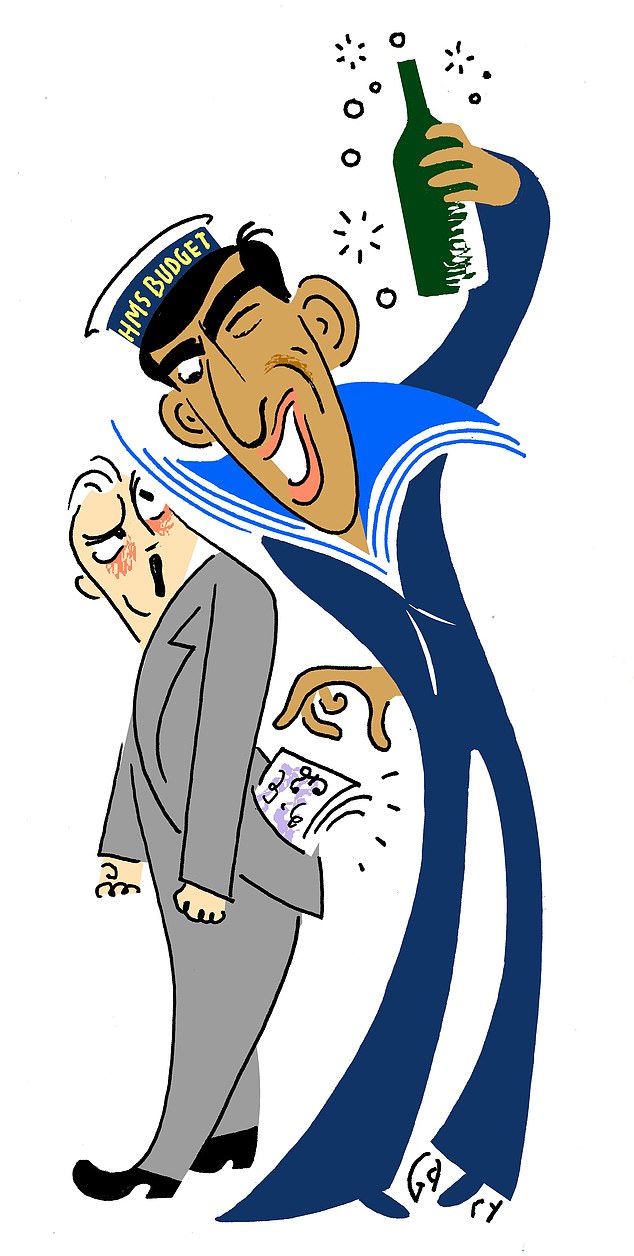 As a general rule of thumb, it’s advisable to wait 24 hours before commenting on any Budget. There’s always something nasty hidden in the small print.

Once the number-crunchers have sifted through the detail, the true picture begins to emerge.

By the end of this Parliament, families on middle incomes will be paying an extra £3,000 a year in tax.

Any morsels tossed from the Treasury table yesterday will be gobbled up by rampant inflation.

Even Rishi’s freezing of fuel duties is sleight of hand, since VAT receipts will go on rising as the world price of oil adds to the cost at the pump.

Council tax is about to go through the roof, and you still won’t get your dustbins emptied. Increases in corporation tax — a tax on jobs by any other name — and in National Insurance are in the pipeline.

The Chancellor may only be doing his master next door’s bidding, but there’s simply no justification for pouring more money into Government departmental budgets right now.

Yet this nominally Conservative Government is intent on burning through cash on a scale not seen since the famous Yorkshire housewife Viv Nicholson won a record £151,319 on the football pools in 1961 and promised to ‘spend, spend, spend’ until she’d blown the lot.

At least it was Viv’s own money to blow. Pumping borrowed billions into unreformed public services, at a time when the country is already drowning in debt, and expecting taxpayers to pick up the tab is madness. It will simply be swallowed up in pay rises. 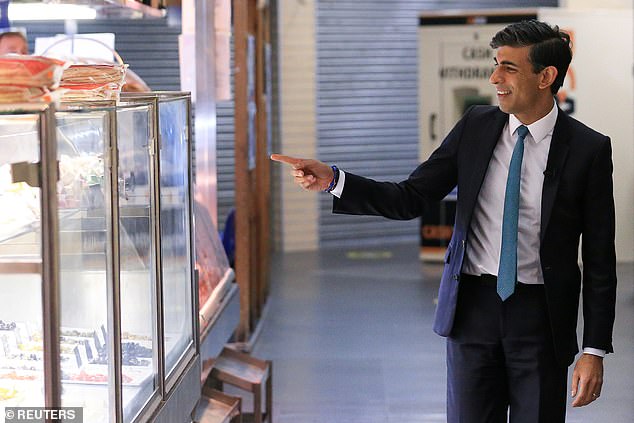 Chancellor of the Exchequer Rishi Sunak visits Bury Market on Thursday. Mr Sunak said in his budget that the pandemic-hit economy is set to extend its solid recovery into next year despite strong inflationary pressures

Yet Sunak has announced yet another £6 billion cash injection for the National Health Service, on top of the thick end of £40 billion allocated a couple of months ago.

Presumably, Boris reckons that Our Amazing NHS is held in such high esteem that there will be few objections to a money-no-object policy. In which case, he may have horribly misjudged the public mood.

Now the Covid crisis has abated, I can’t see many standing on their doorsteps every Thursday night, clapping and banging their saucepans for a complacent health service sitting on a backlog of almost six million appointments.

That may not be the only misreading of where the public are right now.

As part of the ‘levelling up’ agenda, Rishi announced billions for deprived regions, including museums and cultural heritage projects.

Frankly, his ostentatious chanting of the names of the lucky beneficiaries of his largesse, like a well-refreshed uncle handing out Liquorice All-Sorts at Christmas, struck me as patronising in the extreme.

It sounded as if the Tories had bought in to the idea of the North of England as a land of derelict, dark satanic mills, which must be pulled up by its bootstraps by an enlightened, benevolent Government at Westminster.

This vision of the North appears to be based on kitchen-sink dramas like This Sporting Life and When The Boat Comes In.

I’m only surprised he didn’t announce tax breaks for cloth caps and whippets. The Chancellor’s handouts included £2 million for a new Beatles attraction on the Liverpool waterfront.

I’d have thought the last thing Liverpool needs is yet another Beatles attraction. It already has a splendid Beatles Museum, a Beatles Story destination, Beatles bus tours and a reconstructed Cavern Club.

The Albert Dock is overflowing with Beatles pilgrims.

What difference is one more Fab Four shrine, or a statue of John Lennon’s Auntie Mimi, going to make?

Still, in the context of the latest Government splurge, two million quid hardly amounts to a round of drinks, even with the extra tax on spirits and fortified wines. 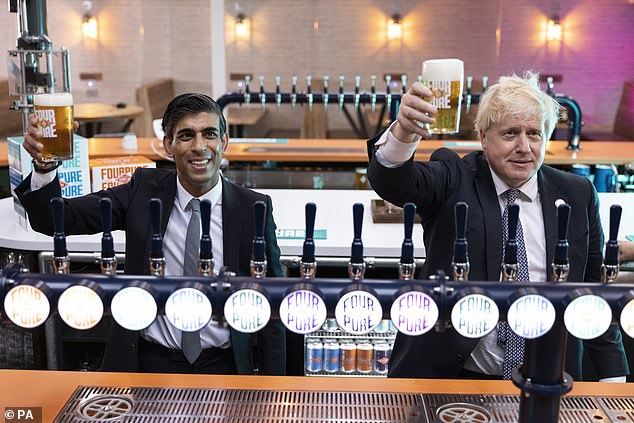 Prime Minister Boris Johnson (right) with Chancellor of the Exchequer Rishi Sunak during a visit to Fourpure Brewery in Bermondsey, London

Boris will consider it worth every penny if he shoots Labour’s fox, which he appears to have done for now.

Luckily for Keir Starmer, he was conveniently missing in action on Wednesday after testing positive for Covid.

Not for the first time, either. Since the pandemic kicked off, Starmer seems to have spent more time in solitary than Mad Frankie Fraser.

She was reduced to moaning about the Budget doing nothing to tackle climate change.

Mind you, she did manage to slip in a line condemning Rishi for picking people’s pockets.

When Labour can complain about Tories raising taxes, you know we have truly passed through the Looking Glass.

The fact is . . . ‘The Tories used to be the party of limited government and fiscal responsibility. Now they’re the party of the public sector.

No, I didn’t write that yesterday. I wrote it back in June, in the immediate aftermath of the Lib Dems’ stunning by-election win in Chesham and Amersham — a constituency in Betjeman’s beloved Metro-Land, on the outskirts of London, which had only ever returned a Tory MP.

Yes, there were local issues — such as planning — but it should have been a shot across Boris’s bows.

It’s all very well trying to shore up the Red Wall, but the Conservative heartlands could do with a little TLC, too.

And if there’s one thing virtually everyone hates, North and South, it’s higher taxes. Especially coming on top of his determination to make us all colder and poorer in pursuit of his Net Zero political vanity project.

Yet this week Sunak dragged another 50,000 people into inheritance tax by failing to raise thresholds. Most of those affected will be in the South, in constituencies like Chesham. 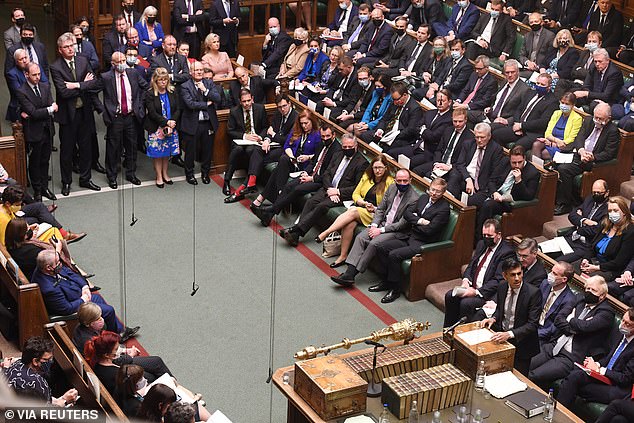 Has he forgotten that the Tory revival began in earnest when George Osborne, in opposition, pledged to raise the threshold to an aspirational £1 million?

Probably not, which is why Rishi looked uncomfortable posing for pictures later. His heart obviously wasn’t in it, which would explain his extraordinary apologia at the end of his speech.

In a passage completely out of kilter with the rest of his Budget presentation, Sunak insisted he was an instinctive, traditional, small-government, low-tax Tory.

‘Do we want to live in a country where the response to every question is: what is the Government going to do about it?

Where every time prices rise, every time a company gets into trouble . . . the answer is: the taxpayer must pay?

‘Government should have limits. My goal is to reduce taxes. By the end of this Parliament, I want taxes going down not up.’

Why didn’t he start from there, instead of finishing there. He should have been bold, resisted Boris’s reckless boosterism, cut taxes and the size of the State, not increased them.

He could have expedited Liverpool’s freeport application, rather than build them a Ringo Grotto.

Right now, like Mr Micawber, he’s reduced to hoping something might turn up — relying on fiscal drag, which Boris probably thinks is something to do with Lily Savage. In the meantime, we are expected to take the pain.

When your take-home pay shrivels, your mortgage rate leaps and you find yourself £3,000 a year worse off and counting; when petrol prices hit the stratosphere and there are queues at the pumps once again, don’t panic.

You can always fill up your car with prosecco . . .