The politicians have had at least two decades to come up with a plan to tackle the migrant crisis. They can’t claim they didn’t see it coming.

Back in the year 2000, I invented a spoof game show called ASYLUM! after an Afghan airliner was hijacked and diverted to Stansted.

Instead of arresting the hijackers and banging them up in Belmarsh to await deportation, the authorities decided to billet them in a local airport hotel.

The rules of the game were quite simple: ‘The competition is open to everyone buying a ticket or stowing away on one of our partner airlines, ferry companies or Eurostar. No application ever refused, reasonable or unreasonable. All you have to do is destroy your papers and remember the magic password: ASYLUM! 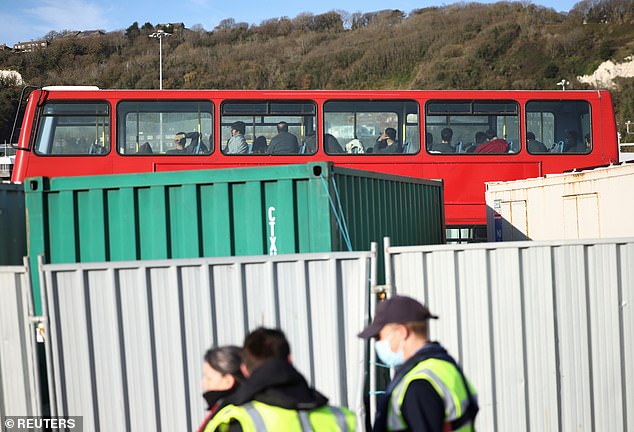 Migrants are escorted by Border Force staff into Dover harbour after crossing the channel in Dover, Kent on Thursday (pictured)

‘Hundreds of lawyers, social workers and counsellors are waiting to help. It won’t cost you a penny. So play today. It could change your life for ever.

That column was headlined: ‘Hijack an airliner and win a council house.’ It was meant to be a joke, not a Dummy’s Guide to settling in Britain. It’s been doing the rounds on the internet ever since. A columnist on another newspaper liked it so much she downloaded it verbatim and passed it off as all her own work.

I can only assume that it went down well at the Home Office, too. For the past two decades, those charged with enforcing our borders have been rolling out the red carpet for migrants from all over the world. 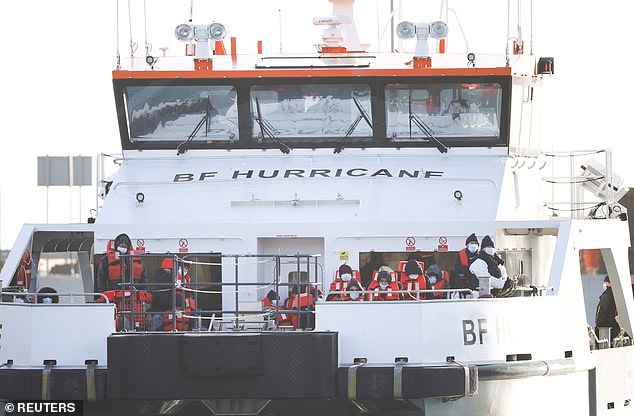 An entire industry, funded by the mug British taxpayer to the tune of goodness-knows-how-many hundreds of millions of pounds, has been created to throw up interminable legal challenges to prevent anyone being deported.

To the best of my knowledge, none of those Afghan hijackers was ever sent home. Practically no one who manages to set foot on British soil is. This week the Government was forced to admit it has managed to deport only five of the 23,400 migrants who have crossed the Channel this year.

A couple of days ago, it was revealed that at least one migrant had arrived on a jet ski, after it was found floating off Dungeness.

That’s in addition to the flotillas of dinghies used by people-smuggling gangs to transport their desperate human cargo to the Kent coast.

Er, sorry, but this column beat them to it again. In May 2016, I wrote a spoof Shipping Forecast, illustrated by a brilliant Gary cartoon featuring migrants heading for Britain on an assortment of inflatables — including a giant banana, a children’s paddling pool and an inflatable dinosaur.

I even speculated that it was only a matter of time before someone landed at Dover clinging to one of Del Boy’s blow-up sex dolls. And that shipping forecast also had migrants in rubber rings being towed ashore by, yep, a jet ski.

You couldn’t make it up. Except, not for the first time, I did.

Look, I’ve said often enough that I don’t blame anyone for seeking a better life. TV pictures concentrate on the smattering of women and small children being helped off the rafts.

But nobody has ever adequately explained why 90 per cent of those arriving here are young men of military age — like the headbanger who blew himself up outside Liverpool Women’s Hospital at the weekend. And about whom we know precisely nothing.

It’s no good expecting the French to stem the tide, no matter how many millions of euros Priti Flamingo bungs the gendarmes. France opened up the Sangatte departure lounge as early as 1999 and has always been happy to wave off migrants intent on crossing La Manche to reach the Promised Land.

The generosity of our welfare and legal systems — and the near-certainty that they will never be deported — will continue to ensure that hundreds of thousands more migrants from the Middle East and beyond will be determined to make that hazardous journey.

All we ever see is them embarking from Calais. Surely it’s time for some enterprising TV programme to follow them from source.

Sounds like a job for Jeremy Clarkson, James May and Richard Hammond. It could be their greatest Grand Tour yet. 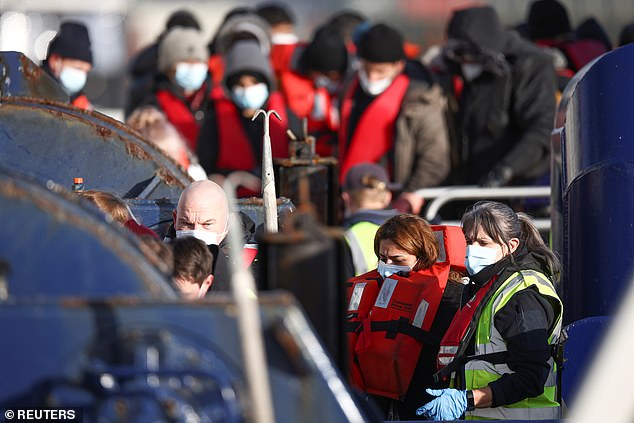 ‘But nobody has ever adequately explained why 90 per cent of those arriving here are young men of military age — like the headbanger who blew himself up outside Liverpool Women’s Hospital at the weekend. And about whom we know precisely nothing’, writes RICHARD LITTLEJOHN

The boys have already tackled Cambodia, Bolivia, Vietnam, India and Burma. For their next trick they could take the old Hippie Highway in reverse, from Afghanistan all the way to the DSS headquarters in Croydon.

I can see it now. They land in Kabul, where they are given 500 dollars each to buy a suitable vehicle capable of making the treacherous 4,700 mile trip.

The three of them assemble on the bombed-out runway at Bagram air base to compare notes. Clarkson arrives first, in a Humvee left behind by the American army. Next up is Captain Slow, in a battered Toyota Land Cruiser, bought from the Taliban.

Then along comes Hammond in a red Ford Mustang, abandoned outside the officers’ mess at Kandahar and which has recently been used as a minicab in the Tora Bora mountains. ‘You idiot, Hammond,’ Clarkson taunts him.

A production assistant in a white coat issues them with their first challenge: to get out of Kabul alive. Taking to the backstreets, dodging potholes, snipers and IEDs, they make it to the open road. Along the way, they must pick up as many migrants as possible. This proves difficult for Hammond, who has only two small rear seats. Attempting to use a route across the mountains to enter Iran, he gets stuck after colliding with a boulder.

Clarkson and May are tempted to leave him behind, but eventually agree to tow him out.

By now, the Hummer and Toyota are carrying their full complement of migrants, which comes in handy when they all have to push the Hamster out of a ditch.

On the motorway outside Tehran, they hit their stride, only for Hammond to spin off the road at 120 mph. Fortunately none of the seven migrants he’d managed to pack into the Mustang was seriously hurt.

Passing through Syria, they stop to pick up a hitchhiker, carrying an AK-47 over his shoulder.

Some say he’s a neurosurgeon, fleeing persecution. All they know is he’s called Osama and he’s heading for Manchester.

Then it’s full speed ahead towards Turkey, where they arrive late at their hotel in Istanbul. Clarkson has to be restrained from thumping a producer who has forgotten to order him a lamb kebab for his supper.

They decide to take a detour via Belarus, where they plan to cross into Poland. At the border they find their way blocked by a giant metal fence and the massed ranks of Polish security forces.

Rather than turn back, Jezza smashes through in the Humvee, followed by May and Hammond. The Mustang is now not only missing a bumper and both doors, it is riddled with bullet holes.

Driving through the night, they eventually reach Calais, where they have to find a way of getting to England. Their usual method of building a pontoon bridge is out of the question because of the distance involved.

Clarkson decides to drive across, but the Humvee soon gets bogged down in the sand.

Then May has a brainwave. They will convert their cars into makeshift boats, like those old Chevrolets Cuban refugees use to cross the Florida straits.

After posing for selfies with the French border guards, they round up some oil drums and strap them to the wheel arches as flotation devices. Then they salvage some planks of wood from the nearby Jungle camp, which the migrants can use as oars.

Clarkson promises anyone who makes it that they are guaranteed a job on his Cotswolds farm come harvest time.

Halfway across they start to sink, before being rescued by UK Border Force vessels and given safe passage to Folkestone, where they are free to head for Croydon.

A triumphant Clarkson declares: ‘Welcome to Britain, the softest touch . . . in the wuurlld!’

And on that bombshell, he bids them a fond farewell . . .