Scientists create the coldest temperature EVER recorded in the lab
Advertisement

Baby it’s cold INSIDE! Scientists create the coldest temperature EVER recorded in the lab – reaching 38 trillionths of a degree warmer than absolute zero

By Ryan Morrison For Mailonline

Scientists have created the coldest conditions ever recorded, reaching just 38 trillionth of a degree warmer than absolute zero.

While researching the wave properties of atoms, experts from the University of Bremen produced one of the ‘coldest places in the universe’ for a few seconds in the lab.

Absolute zero – zero Kelvin, or -459.67°F – is the point at which atoms have no enery and don’t move, and is the coldest temperature it is theoretically possible to reach.

To get as close to this point as possible, the team manipulated a cloud of atoms to a point where it was at a ‘virtual standstill.’

For a few seconds these particles were so still the temperature lowered to 38 picokelvins (pK), which is 38 trillionth of a degree above absolute zero.

The team says this could have significant ramifications for our understanding of quantum mechanics, as the colder the temperature, the more peculiar matter acts. 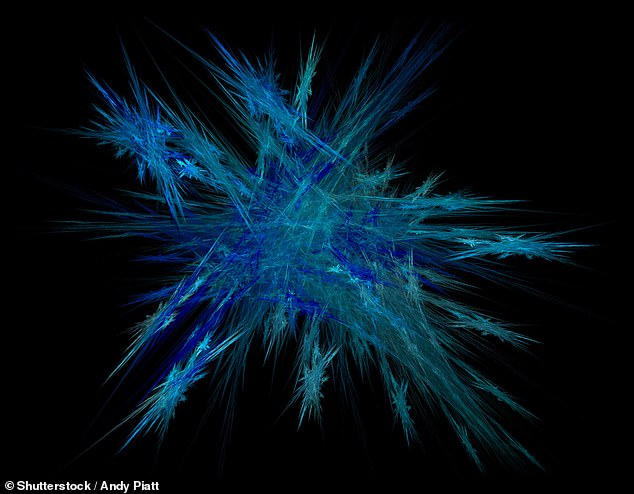 Absolute zero is the coldest temperature it is theoretically possible to reach, based on the laws of thermodynamics. It is zero Kelvin, or -459.67 degrees Fahrenheit

A Bose-Einstein condensate (BEC) is known as the fifth state of matter, after solid, liquid, gas and plasma.

It is formed at a fraction above absolute zero and only in atoms that act like bosons, one of two types of fundamental particles.

When bosonic atoms are cooled to form a condensate, they can lose their individuality.

They behave like one big collective superatom, a bit like how photons become indistinguishable in a laser beam.

The first BEC was shown experimentally almost 25 years ago by researchers at the University of Colorado Boulder in the US.

To achieve the remarkably low temperature, the German team developed a process that lowered a system’s temperature by slowing particles to the point they came to a near total standstill.

This is such a low temperature there are no thermometers that can detect it, so they base the measurement on the lack of kinetic movement of the observed particles.

The mechanism used to detect the temperature is known as a ‘time-domain matter-wave lens system,’ and can see matter behaving like a wave.

To study these waves the team used a magnetic lens that allowed them to shape a quantum gas and used it to make a focused matter wave they could control and ensure behaved in a specific way.

Unlike regular gas, made of a loose arrangement of particles, quantum gas is much less predictable, also known as a Bose-Einstein condensate.

‘By combining an excitation of a Bose-Einstein condensate (BEC) with a magnetic lens, we form a time-domain matter-wave lens system,’ the researchers wrote.

‘The focus is tuned by the strength of the lensing potential. By placing the focus at infinity, we lower the total internal kinetic energy of a BEC to 38 pK.’

The BEC is generated in a magnetic trap, after which the trap is switched off, and the gas initially expands in all three spatial directions.

A magnetic lens has already been able to slow down this expansion and collimate the matter wave in the past, but it only worked in two directions. 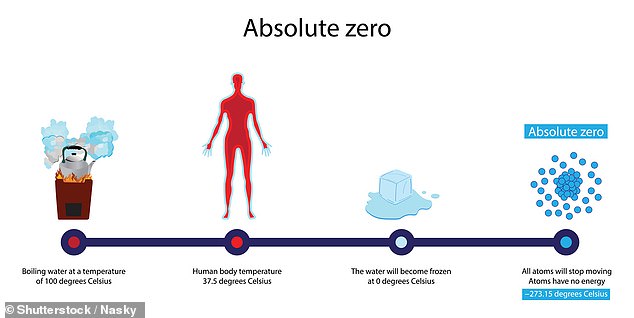 Scientists created the coldest conditions ever recorded, reaching just 38 trillionth of a degree warmer than absolute zero, which is the coldest temperature possible

However, this is the first time that researchers have been able to stop the expansion in the third direction as well.

The researchers say future experiments could make the particles get even slower, and last at that point for up to 17 seconds, allowing for more detailed study.

The findings have been published in the journal Physical Review Letters.

ABSOLUTE ZERO: THE COLDEST ANYTHING CAN GET

Absolute zero – or 0 Kelvin – is the theoretical coldest temperature it is possible to achieve, a point where atoms stop moving and have no energy.

It is the lowest limit of the thermodynamic temperature scale, a state at which the enthalpy and entropy of a cooled gas reach their minimum value.

Fundamental particles of nature have minimum motion and vibration at this temperature point, and only retain quantum mechanical, zero-point energy-induced particle motion – creating for unusual behaviours and conditions.

Scientists have achieved temperatures close to absolute zero, including through the creation of unusual states of matter such as Bose–Einstein condensate, superconductivity and superfluidity.