Seven new £200,000 homes in a small village in rural Wales face being demolished after council officials ruled that their driveways are too steep.

Families in the village of Blaina, near Abertillery in Gwent, are fighting to prevent the smart row of brick houses – one detached and six semis – from being bulldozed over planning blunders.

Local authorities declared that the driveways are too steep and that cars parked on those driveways could roll down onto the road and into the water opposite. They also ruled that the garden walls are too high and there is no road crossing to safely access the properties.

The application to build the homes was originally refused by Blaenau Gwent Council in 2014, but was later overturned by Welsh Government planning inspectors and the homes were built in 2018.

However, following an anonymous complaint, officials ruled that the homes did not match the planning permission.

Owners blame mistakes by the developers and the local council for giving them several years of stress and worry. The mortified residents are now desperately hoping to reach a ‘sensible solution’ with Blaenau Gwent County Council.

At tomorrow’s meeting of the council’s planning committee, officials will have another look at the development on the former site of the village school. If planning permission is refused, the houses could end up being demolished, local media reported.

Homeowner Andrew Pugh, 57, insisted that the residents ‘weren’t to know’ about the planning issues and are ‘in a state of shock’ about the dispute.

Speaking to MailOnline today, he said: ‘We have been left piggies in the middle having to take the rap for their mistakes. In my view there’s a vendetta going against the developer – it’s a massive worry.’

He told local media: ‘As you can imagine, the cost to ourselves if this gets turned down is going to be catastrophic, as we’ve all paid about £200,000 each for these houses.  We weren’t to know about these issues. We are in a state of shock at how this was allowed to happen. As far as we were aware everything was above board and legally transparent.’ 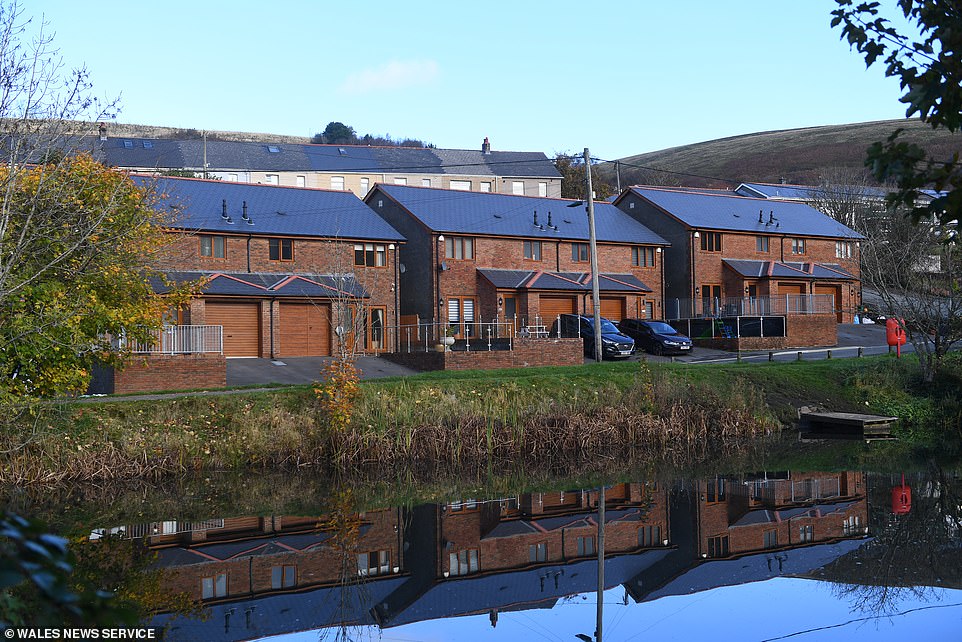 Seven families in a small village in rural Wales are fighting to prevent their new £200,000 homes from being demolished after council officials ruled that their driveways are too steep 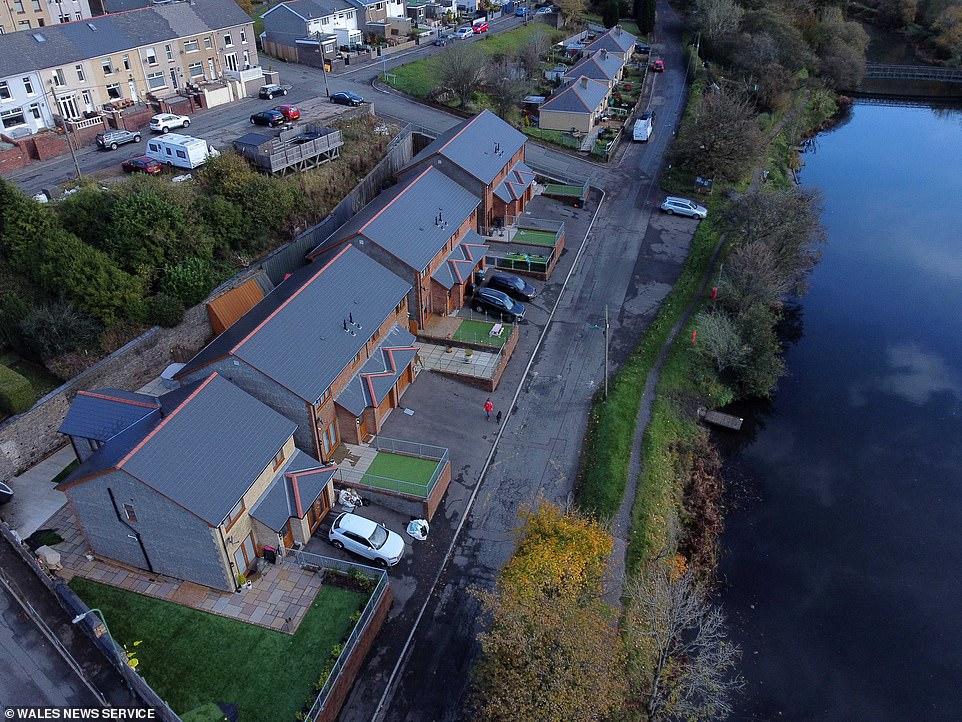 Local authorities declared that cars parked in driveways on the row of six semis and one detached home in Blaina, near Abertillery, Gwent could roll down onto the road and into the lake opposite 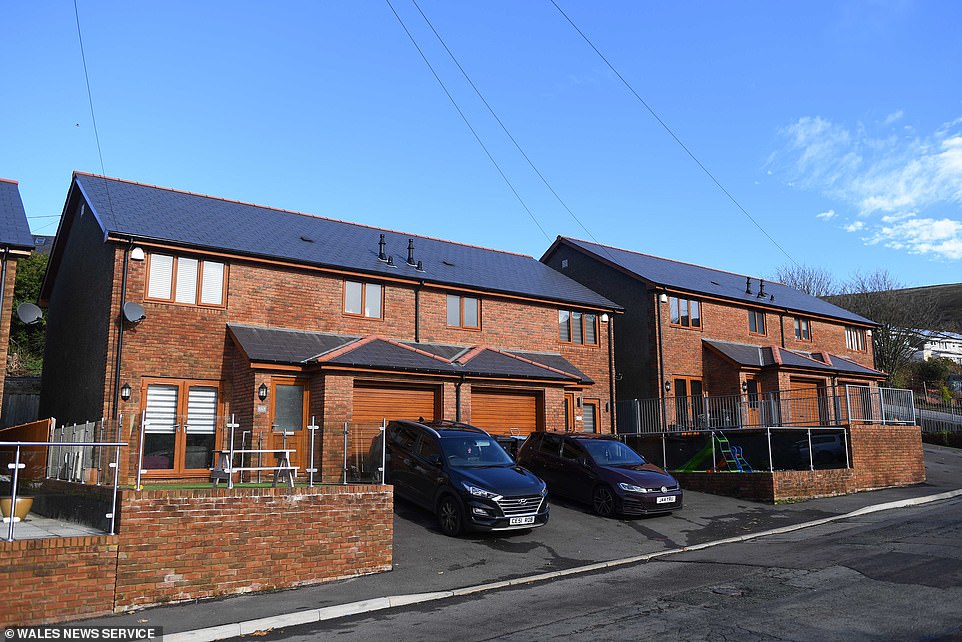 The application to build the homes was originally refused by Blaenau Gwent Council in 2014, but was later overturned by Welsh Government planning inspectors and the homes were built in 2018 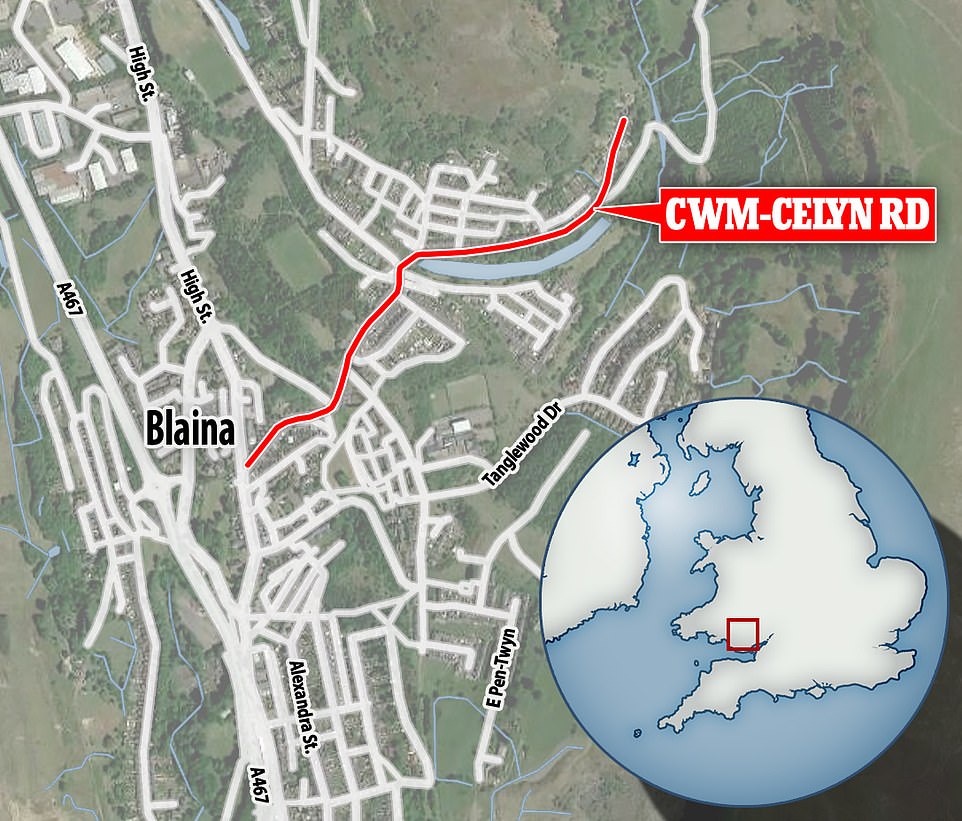 This map shows the site of the row of six homes in Blaina, near Abertillery, Gwent

One homeowner, who asked not to be named, said: ‘It is ridiculous really – we just hope that people see sense and the houses aren’t demolished.

‘We have been here three years and the houses are lovely. We are just trying to keep calm because there is not much we can do about the planning permission issue. It is a nice place to live and we wouldn’t have moved in if we though the drive was too steep.’

Another neighbour who asked not to be named added: ‘A lot of people feel this is just a fit of pique by the council. They weren’t happy at the Welsh Government going over their head to approve the houses on the old school site. So now they are digging their heels in.

‘There must be lots of solutions rather than knocking down the houses. That would just be a scandal in these times when people are homeless.’

Planning permission for the properties was originally turned down but the decision was overturned by the Welsh Government.

Builders D3 Property Developments finished the development in 2018 and the families, some with young children, moved in. But two months later they were told that the development breached 10 different planning laws.

One homeowner, a mother-of-two who didn’t want to be named, said: ‘They’ve sorted out seven of them but there are still concerns over the driveways, the walls and the road crossing. 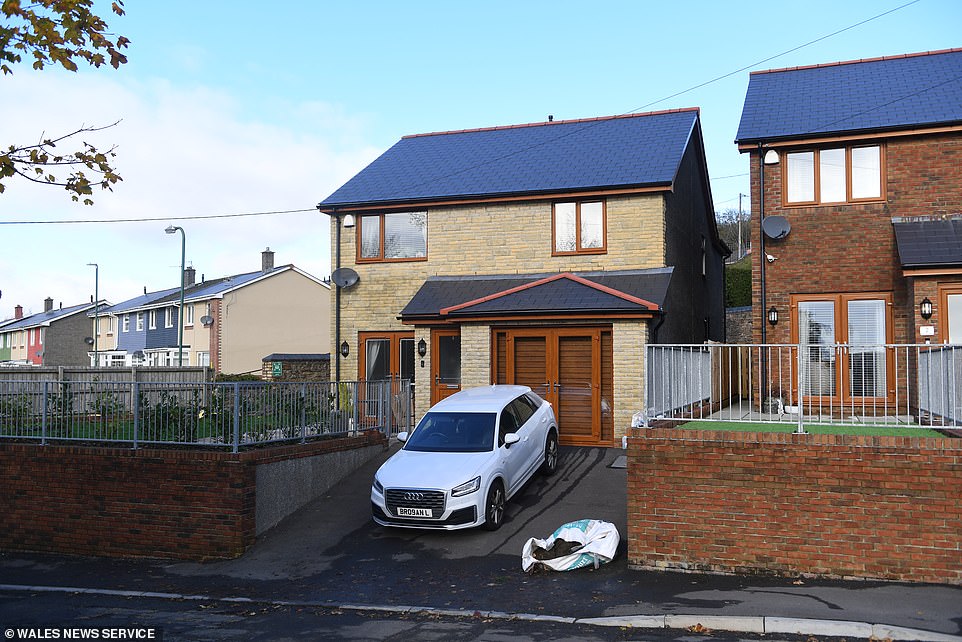 However, following an anonymous complaint, council highways officials ruled that the homes did not match the planning permission and determined the driveways were too steep 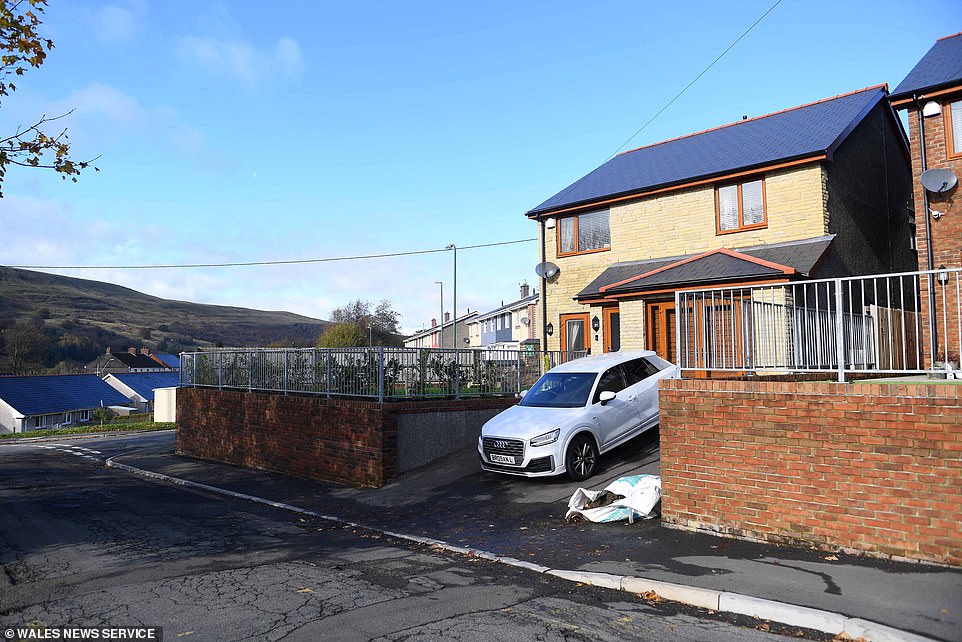 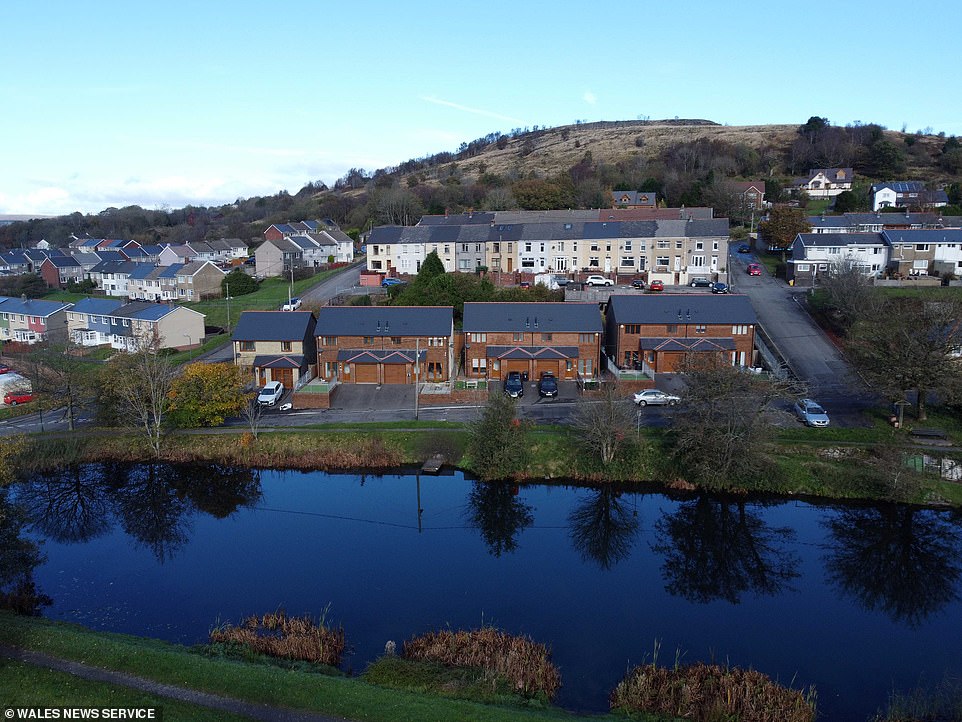 Now the residents are facing the nightmare scenario of seeing their homes razed, and are hoping to reach a ‘sensible solution’

‘It’s not out mistake, we bought the house in good faith and all the searches were done. But it turns out the local planning authority didn’t even send someone out to view the site when it was being built.’

The planning row was started by a single anonymous objection to the seven houses built on the site of the much-loved loved Cwmcelyn Infants school and opposite pretty duck pond.

Two of the homeowners are twin brothers Jay and Joe Roberts, 34, who went to the infants school as children and now live next-door to on the site.

Jay’s partner Stacie Clarke, 33, said: ‘We were first to move in and was quite alarming when we heard our house could be knocked down. The planning issues have been hanging over us for more than two years and it’s quite concerning. We put all our savings into the house, it’s our little boy’s home, we don’t want to lose it. Some people are saying they should turn our homes into social housing – it’s very upsetting. We’ve worked hard to buy our own home and it could be taken away from us.

‘We’ve not had a single visit from the council to explain what’s going on but we have heard that it may be up to us to pay to put things right.’

The couple paid £175,000 for the house, the same price as their neighbours except the family who live in the one detached house who paid more.

But all seven families fear they would never be able to see up because of the planning issues affecting the street called Rhes yr Ysgol – Welsh for School Rise.

Another resident said: ‘The driveways are not even that steep – there are thousands of houses built on much steeper inclines in the Welsh valleys. The walls are apparently too high and block the view when you are reversing down your driveway but that can easily be put right.’ 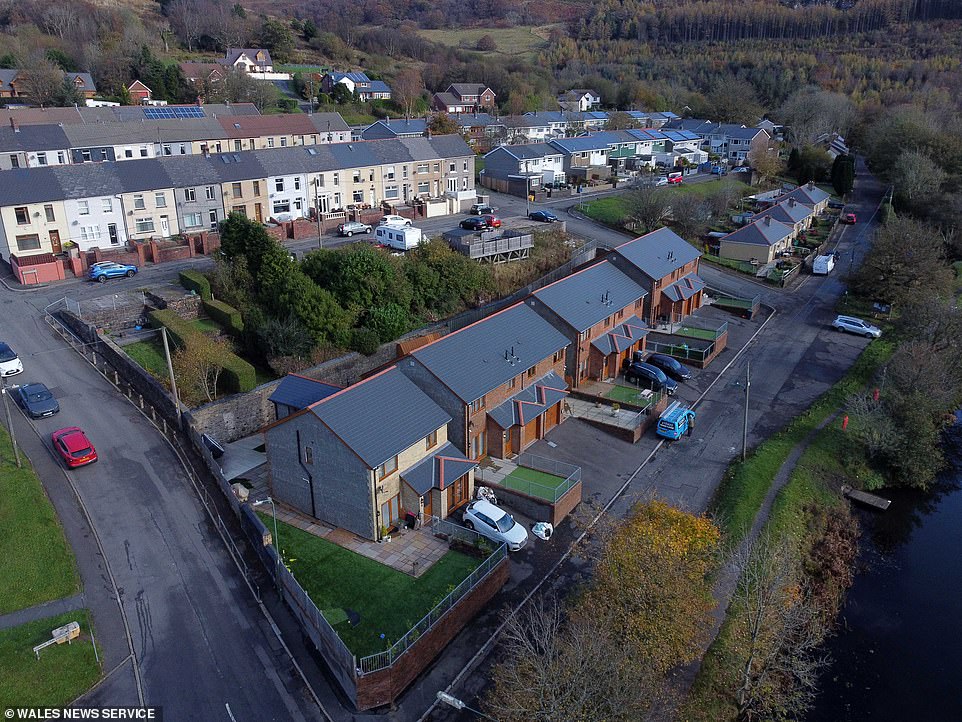 Homeowner Andrew Pugh, who has represented residents in the dispute with Blaenau Gwent Council, said they ‘weren’t to know’ about the planning issues and are ‘in a state of shock’ 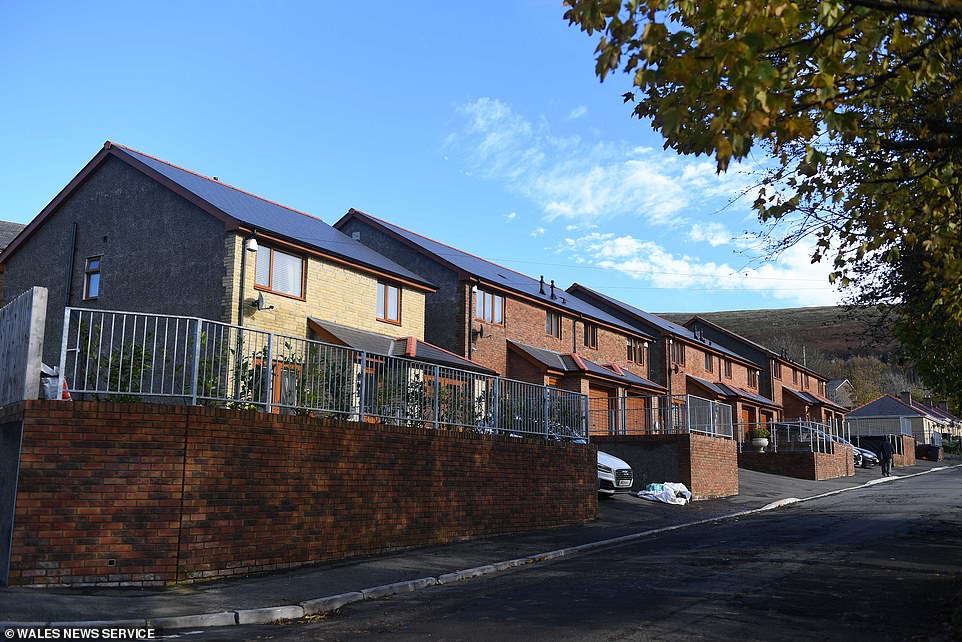 Blaenau Gwent Council planning committee is due to meet tomorrow to decide the fate of the row of houses.

A villager, 64, who didn’t want to be named, said: ‘I went to the school on the site, it’s a shame they demolished it. People have to live somewhere I suppose but if there are rules you have to stick by them.’

Peter Barnes, agent for D3 Property Developments, told councillors that the developer had agreed to lower the driveway walls to improve the road visibility.

‘The alternative is to descend into chaos,’ said Mr Barnes.

Councillor John Hill said: ‘We’re in a situation where we need to solve this and the answer can’t be demolishing the houses, we have to figure out a way of looking after those people.’

But planning officers recommended refusal of planning permission because the steep driveways meant there was a risk that cars would roll into the road – and that visibility from the driveways is also hampered.

Mrs Hallett said: ‘Those issues are gradient of driveways and visibility.’

Her report explained that the steep driveways meant there was a risk that cars would roll back into the road.

Planning officer Jane Engel said: ‘Consultation has been carried out with the owners/occupiers of all seven properties.’

She added that highways officers believe the issues had not been solved and the development ‘remains a potential hazard to the public highway. ‘