Legendary actor, choreographer and dancer Lionel Blair has died at the age of 92.

The veteran showbiz star, who was a prominent figure on British TV screens throughout the late 1960s, the 1970s, died surrounded by his family, his management company today confirmed.

The star’s agent said: ‘He got to a very ripe old age, he was loved by his family, and I think he died in their company, which is lovely.’

Born in Montreal, Canada, in 1982, Blair, who was born Henry Lionel Ogus, moved to north London’s Stamford Hill with his family when he was just two-years-old.

The veteran star, who in recent years appeared on Celebrity Big Brother and BBC’s The Real Marigold Hotel, fed his early passion for performing while sheltering from air raids during the Second World War. 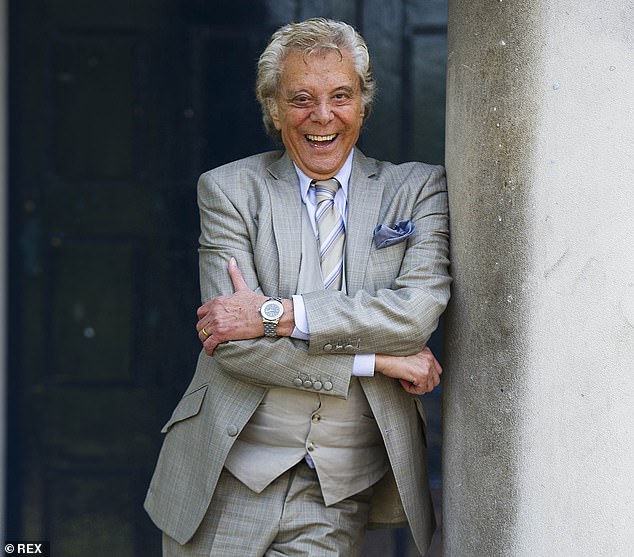 Actor, choreographer and dancer Lionel Blair has died at the age of 92 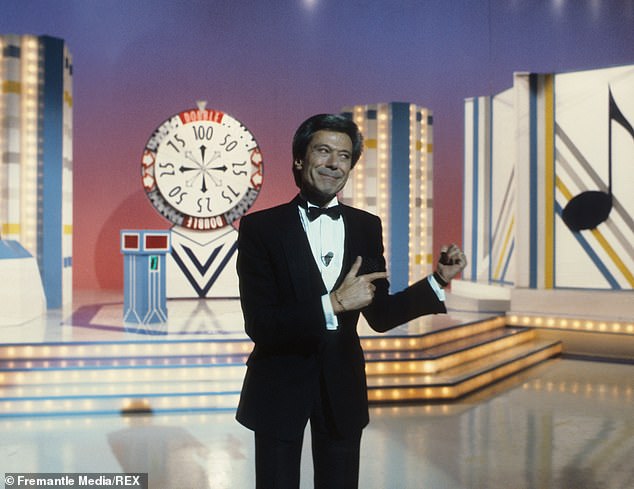 The legendary showbiz star, who was a prominent figure on British TV screens throughout the late 1960s, the 1970s, died surrounded by his family 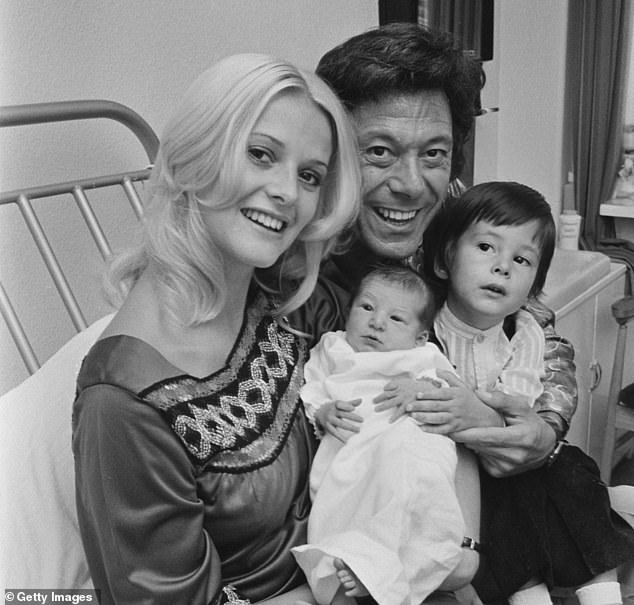 He was evacuated to Oxford when war broke out, with his sister Joyce and mother Deborah.

However, the family’s stint in the countryside did not last long and they returned to London after witnessing a German plane crash leading to his father, Myer, calling them back to the capital.

‘If that can happen there, what’s the point of being in the country away from each other?’ Blair said his father told him.

His father’s parents were Russian, though Blair described him as ‘the archetypal north London barber’.

The young Blair got his first taste of showbiz by watching the likes of Fred Astaire, Ginger Rogers and Shirley Temple at the cinema, before going home to copy them.

The family was Jewish, though not orthodox and their habit of eating bacon was frowned upon by the neighbours.

Blair was 13 when his father died after going in for surgery on a hernia and duodenal ulcer. ‘It changed everything,’ Blair said.

‘It was the first time I’d ever thought, I’m never going to see him again. It was so awful and I don’t think I’ve ever experienced a loss like it.’

Blair said he had to grow up ‘artificially fast’ following the death of his father, and he was already making a name for himself as an actor. However, then came the death of his mother, leaving him an orphan.

Joyce then married her first husband, meaning Blair was on his own. 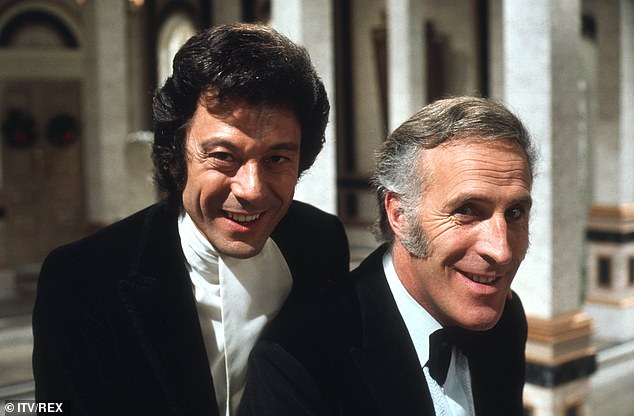 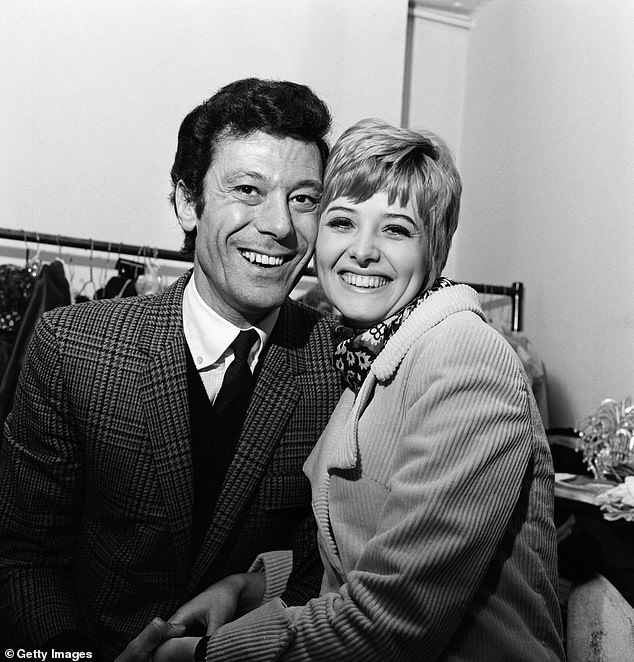 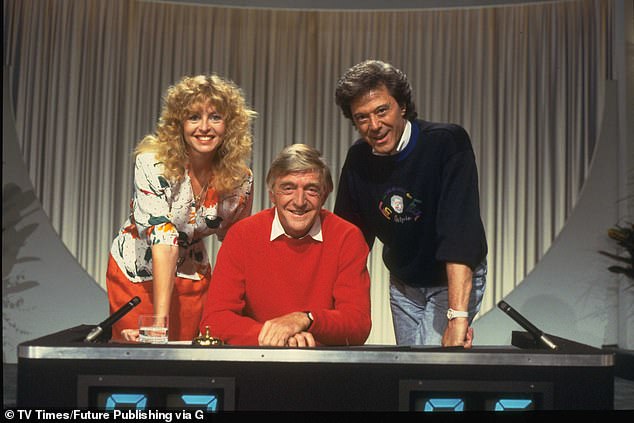 Liza Goddard, Michael Parkinson and Lionel Blair as team leaders on the game show Give us a Clue

Throughout his showbiz career, he has been a dancer, choreographer, TV presenter, director and actor – covering the entire sphere of the business.

In the West End he played the Child Catcher in Chitty Chitty Bang Bang at the London Palladium, and had roles in Lady Be Good, Mr Cinders and Pageant.

The pair later became good friends and Blair selected the singer for an episode of Great Lives on BBC Radio Four in 2010.

Blair also appeared in the Beatles’s film A Hard Day’s Night as a choreographer. However, he is best known for being captain of the men’s team on Give Us A Clue, the ITV game show.

He reprised the role in a 2011 Comic Relief special and was back on screens for Celebrity Big Brother in 2014. He spent 15 days in the house, exiting third after boxer Evander Holyfield and model Jasmine Waltz.

In 2017, he was one of the celebrities appearing in the BBC reality series The Real Marigold Hotel. Blair’s ubiquity in British entertainment helped save a man’s life.

In 2006, he and comedian Alan Carr were forced to abandon filming for a comedy to talk a man out of killing himself.

The pair were shooting a pilot for Carr’s End Of The Pier show on the North Pier in Blackpool, when a man was seen on the edge of the pier, threatening to throw himself off.

Carr and Blair talked him down until police arrived to help him home. ‘It really scared me – I’ve never experienced anything like that before,’ Blair said.

‘We spent about 10 minutes talking to him. He just kept saying he wanted to end it all. Then someone said it was Lionel Blair from TV and he did a double take.

‘I reached out, then he grabbed both our arms and we heaved him up.’

Even in his later years, Blair maintained a healthy tan and his famous bouffant hairstyle.

His cheerful demeanour and enthusiastic manner led to jokes he was gay, and his sexuality was a running gag on Radio 4’s I’m Sorry I Haven’t A Clue.

Blair said he largely ignored the jibes, but once sent a man to hospital after punching him when he called him a ‘fairy’.

And on claims he could be called camp, Blair said: ‘Camp? Really? I prefer ‘flamboyant’, or ‘enthusiastic’. I’ve always been a bit over-the-top.’

He married wife Susan in March 1967 and once said the secret to a successful marriage is memories.

The couple had three children and three grandchildren.

And author Emma Kennedy tweeted: ‘I am very glad I got to meet Lionel Blair. He was a Phenomenon. Full of magical, fruity, end with a wink anecdotes. What a career. What a talent. £RIPLionel’

Meanwhile actor Julian Clary tweeted: ‘RIP dear Lionel Blair. A showbiz trooper if ever there was.’

Germany sees its largest ever number of new Covid-19 cases with 33,949