More than 80,000 fans are set to descend on Alexandra Palace over the next fortnight as the World Darts Championships prepare to go ahead despite rising fears over the Omicron variant in the UK.

Fancy dress and sold out sessions are back on the agenda after the PDC were forced to scrap both for the 2021 edition. Those attending though will have to have Covid passports to hand with strict measures in place.

The head of Matchroom Sport Group Eddie Hearn has insisted that the tournament will be seen through to its conclusion on January 3, even if government rules force them to lock out fans once more.

A full crowd of 3,000 is expected on Wednesday evening as defending champion Gerwyn Price kicks off proceedings at the London venue, with the same numbers expected for all 28 sessions across the next 16 days of action.

Covid passes came into force in England on Wednesday morning, despite a revolt within the Conservative goverment, amid concerns over the latest variant. The World Health Organisation warned this week that it is spreading at an unprecedented rate.

It means that all individuals attending Alexandra Palace must produce an NHS Covid Pass upon entry to the Palace. That includes proof of full vaccination, proof of natural immunity or proof of a negative lateral flow test taken on the day of the event. 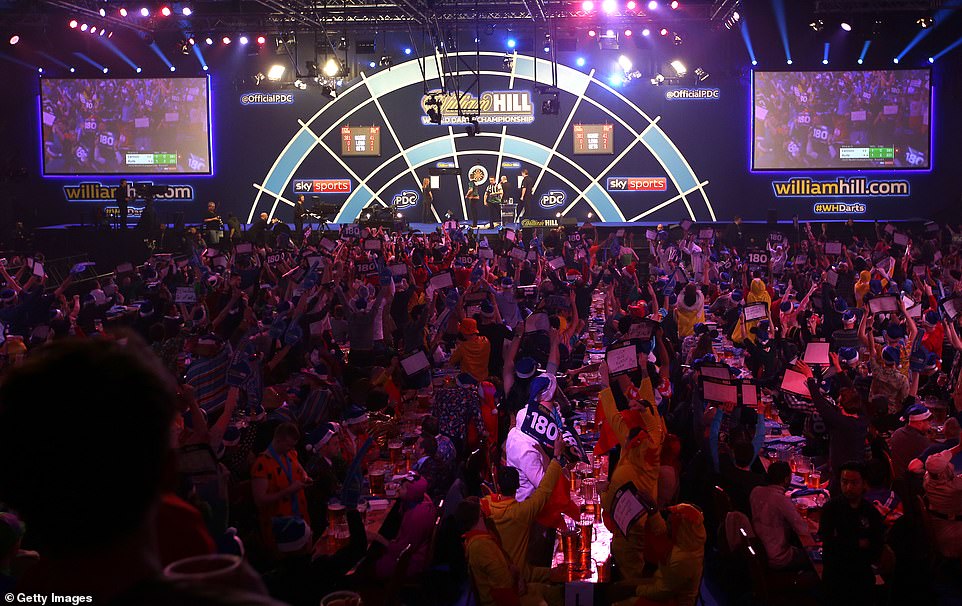 The Alexandra Palace will play host to the World Darts Championship again this winter, with spectators allowed back in 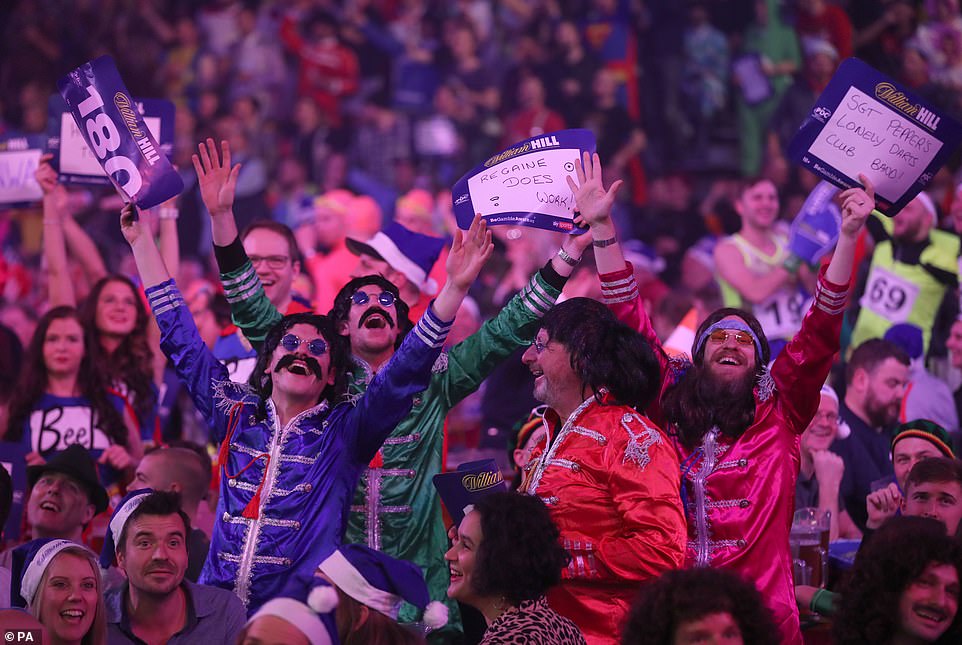 The PDC has warned fans that those unable to demonstrate their current Covid status will be turned away.

Despite the stringent measures, there are still fears that fans could be barred from the event due to tightening government regulations. In that event, Hearn insists that the show will go on.

‘If anything happens, firstly we will cry a little bit – and then we will lick our wounds and go to work,’ Hearn, who took over from father Barry as head of the events organisation last April, told the Sun.

‘We are all used to it now as a business. We will always adhere to the government rules.

‘We will make sure it’s a safe, friendly environment for our customers and we will adapt if needed to under any rule change.

‘If we have to adapt in the circumstances – whether that is distancing, implementing masks in the venue or reducing the crowds – we have the expertise to do all of that. 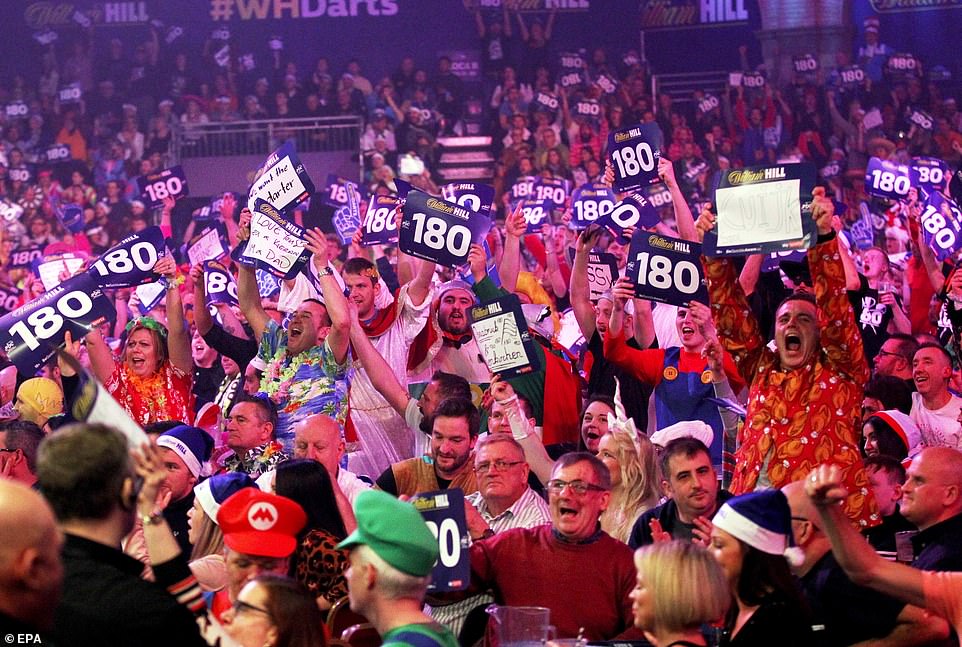 More than 80,000 fans are expected to watch the Championship, which takes place over the next two weeks in north London 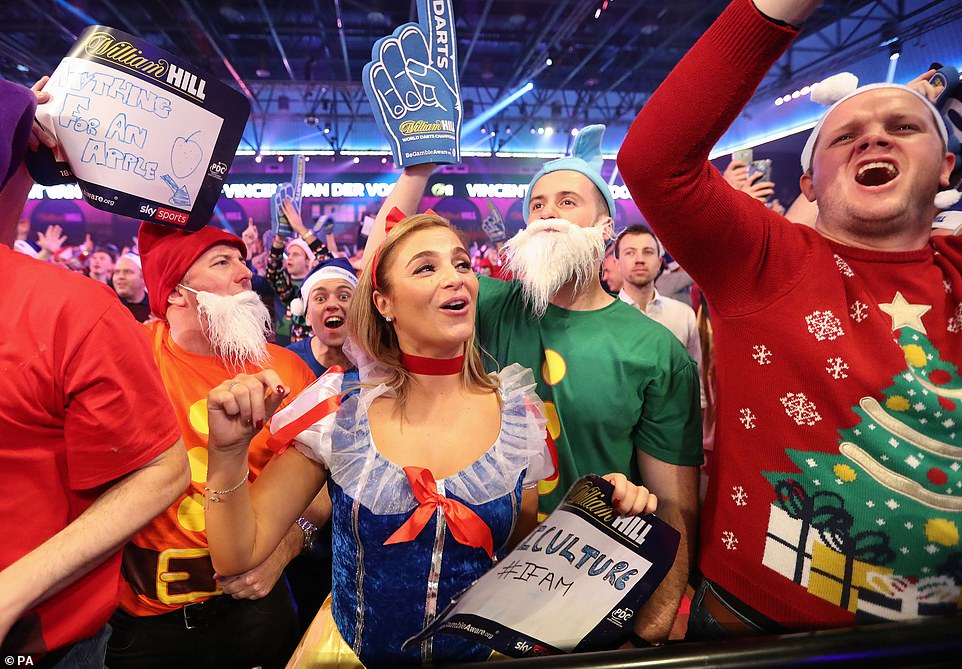 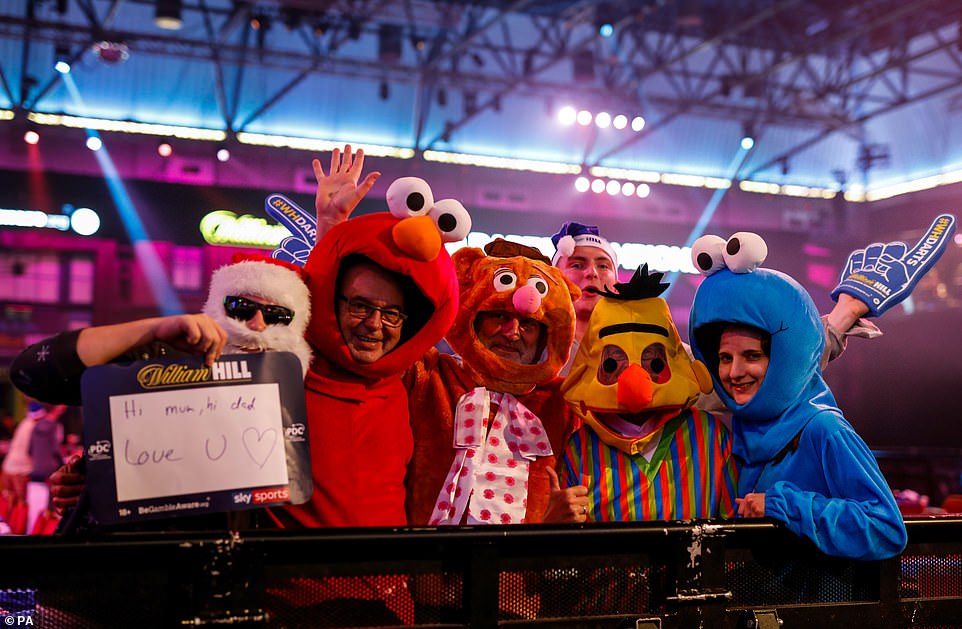 Matchroom Sports Group are hoping to have fans at every session, but will be prepared to play on if government rules change

‘It would be a real shame because we missed it last year and it is back in full this year. Fancy dress is on the agenda.’

Fans will still have to wear face coverings around the venue, and when seated, with punters only permitted to take them off while eating or drinking.

But Hearn insists the measures in place won’t do anything to stop the party atmosphere inside the Ally Pally – a venue that has attracted sporting royalty to genuine royalty in the past, with Prince Harry having attended back in 2014. 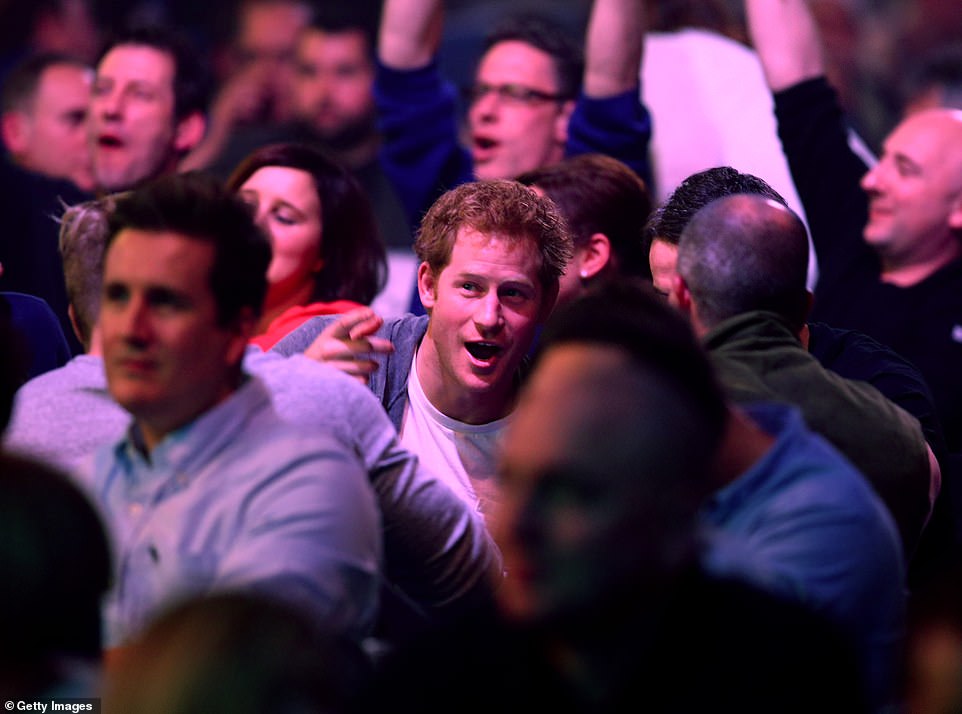 The event has often attracted famous faces due to the unparalleled atmosphere, with Prince Harry having attended in 2014 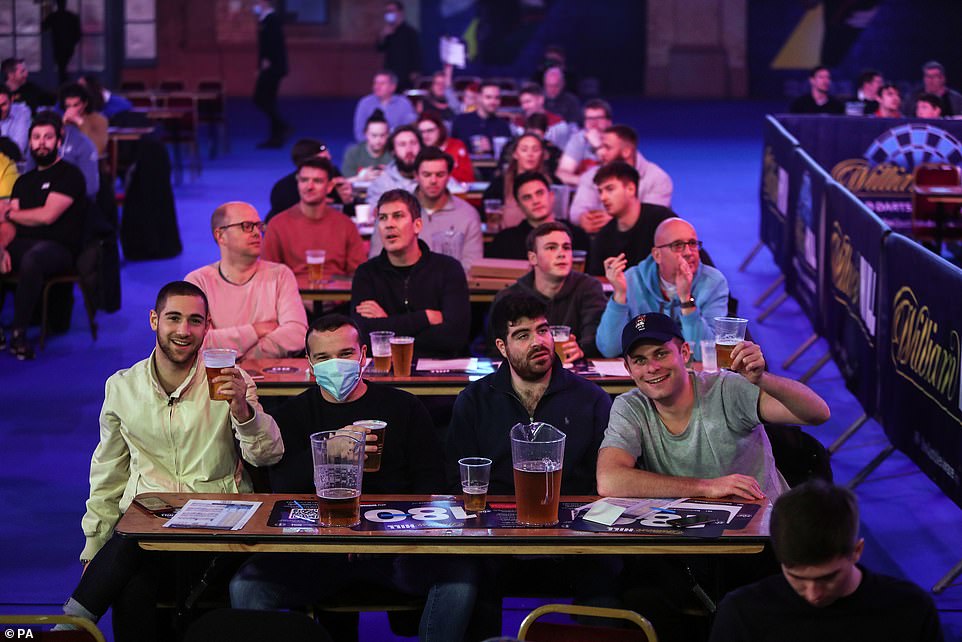 ‘With the year that everybody has had, this event is going to put a smile on a lot of people’s faces,’ Hearn added.

‘We all know the world championship is an absolute must-go-to for Christmas viewing for any sports fans let alone darts fans.

‘The atmosphere is going to be really special, the best we have seen.’

Reigning champion Gerwyn Price was forced to celebrate his vcitory earlier this year in front of an empty Ally Pally.

The Welshman is focused on adding a second world title to his trophy cabinet, and will be hoping to do so in front of a packed house this time around. 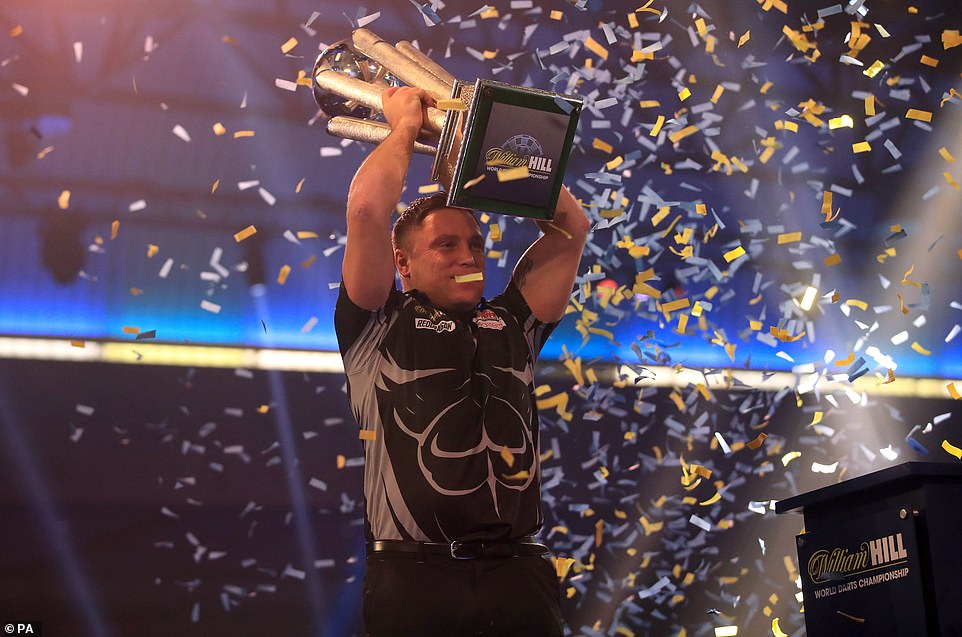 Gerwyn Price lifted the Wolrd Championship trophy in an empty Alexandra Palace this year, and is targeting another win

‘Most of the titles I have won, I’ve gone on and defended them,’ he said. ‘It gives me that extra little incentive. I thrive under the pressure.’

Price walked away with a cheque for £500,000 after his victory in January, while Hearn has stated he wants to see the prize fund hit an incredible £1million in the near future.

‘During the Covid period the PDC didn’t touch prize money, they continued to provide opportunities for players,’ said Hearn back in July.

‘I’d love to make the World Championship a million pound first prize. That’s the general crazy plan that we’ll always talk about in board meetings.

‘People relate prize money to the stature and size of the sport.’

The first session on Wednesday sees Price begin his title defence. The 36-year-old – who has set his sights on winning five world titles before the age of 50 – will face either Ritchie Edhouse or Peter Hudson in the second round after a first round bye. 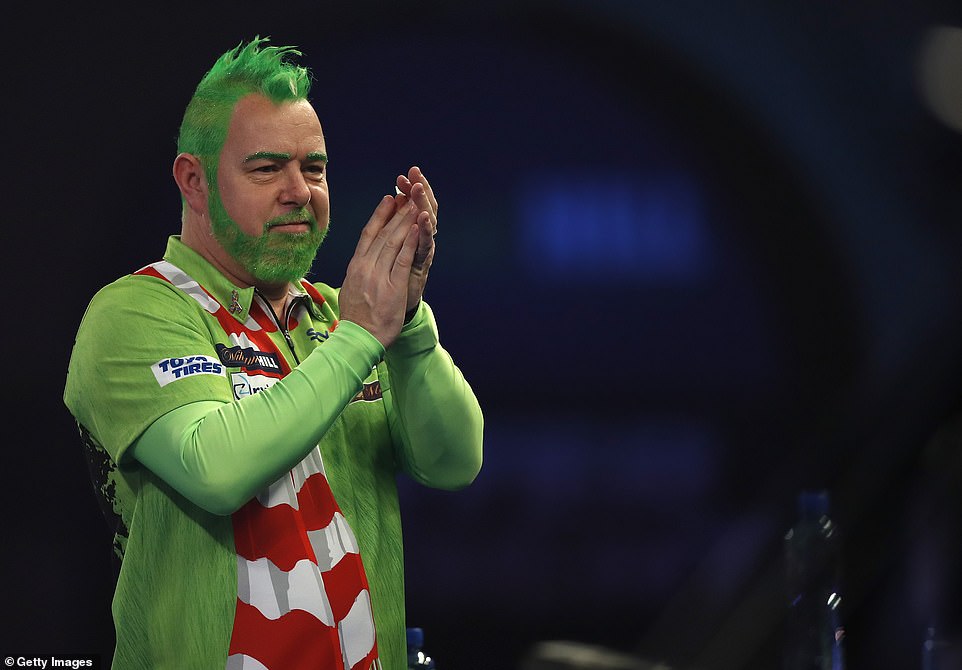 Even the players tend to get in on the fancy dress act, with Peter Wright of Scotland having dress up as the Grinch in 2020 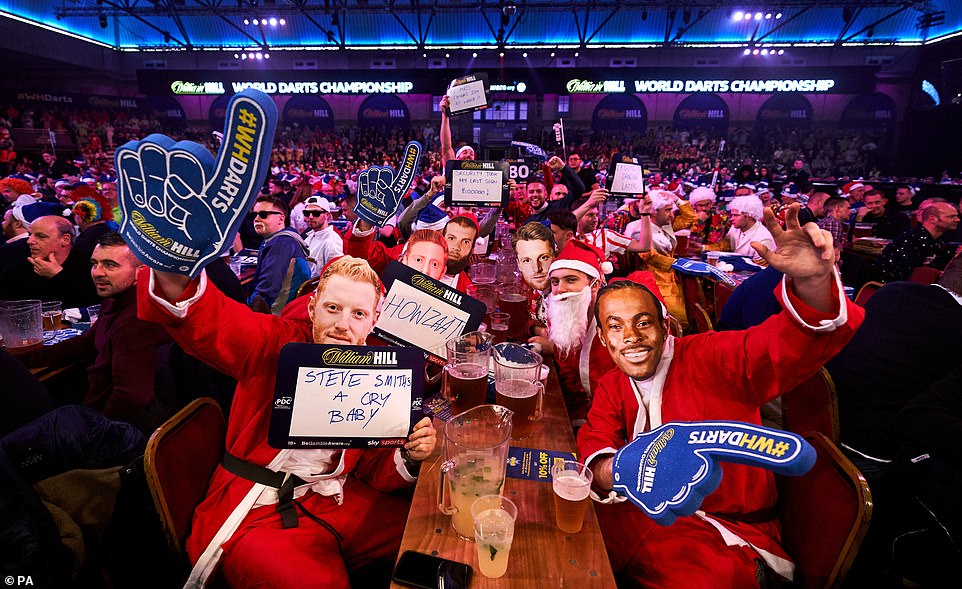 Fans will be hoping that new measures are not passed in the coming days by the government, with all 28 sessions attendable

Liverpool boss Jurgen Klopp says ‘EVERYONE’ at his club is vaccinated

Ashes: Mark Wood is OUT of England’s 12-man squad for second Test but Jack Leach is included