Shocking scenes have emerged from the Valley stadium as Ipswich Town supporters took it upon themselves to confront John McGreal’s men following their dismal performance against Charlton.

Ipswich had hoped to close the gap on the top six by claiming three points against the Addicks on Tuesday night. Instead, they suffered a 2-0 defeat and allowed Charlton to move within a point from them.

The 3,159 Blues travelling supporters were frustrated with their side’s performance…especially given the fact they have won just two of their last 10 matches. Therefore, they made sure their feelings were known. 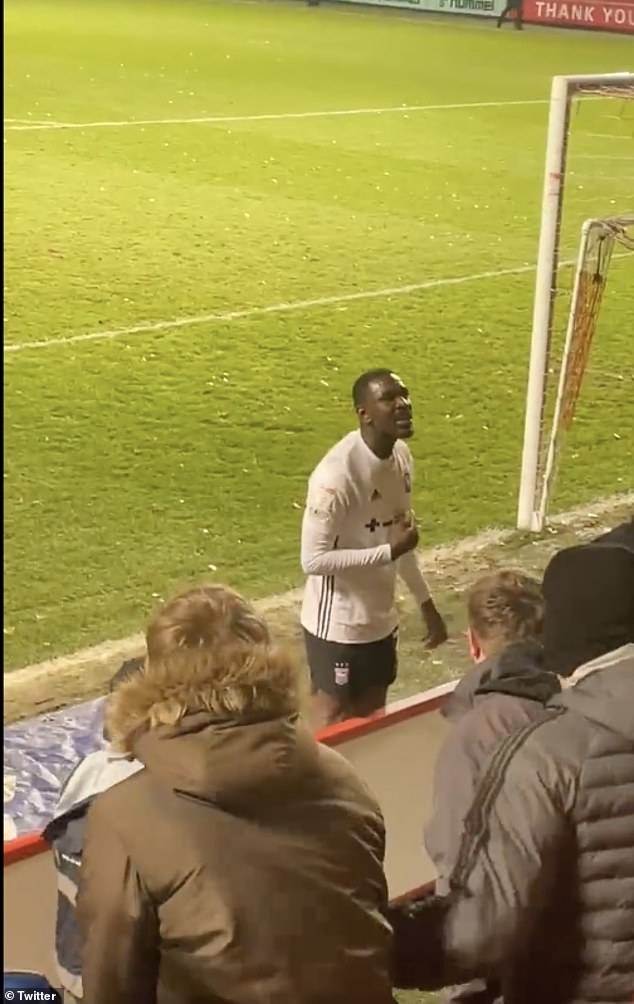 John McGreal – who took over as the interim manager following the sacking of Paul Cook – said he sent his players over to thank the fans following the game.

However, the supporters were not impressed considering Ipswich had failed to muster a single shot on target during the game and allowed Jayden Stockley and Alex Gilbey to score for Charlton.

As a result, the fans in the away end of the stadium threw objects at the players and shouted verbal abuse before stewards arrived to take control.

The fans were heard chanting the following song: ‘You’re not fit to wear our football shirt’.

Various players tried to reason with the fans but that just encouraged more to jumped down to confront them.

One of those involved in the incident was Toto Nsiala. He was seen trying to speak to the angry fans before being ushered away by Christian Walton.

However, Walton who was acting as peace-maker – was then shoved by a supporter, resulting in action being taken by the police.

Speaking about the incident after the game, McGreal said: ‘I don’t know what happened. I sent the lads over, as I always do with the fans, because they pay their money. I sent the lads to clap the fans and that’s all I know to date.

‘It’s two weeks before Christmas, they’re putting their hands in their pockets and they come in their thousands for every single away game.’

However, McGreal did admit that the players have ‘got to be better for the fans’ following their defeat to Charlton. 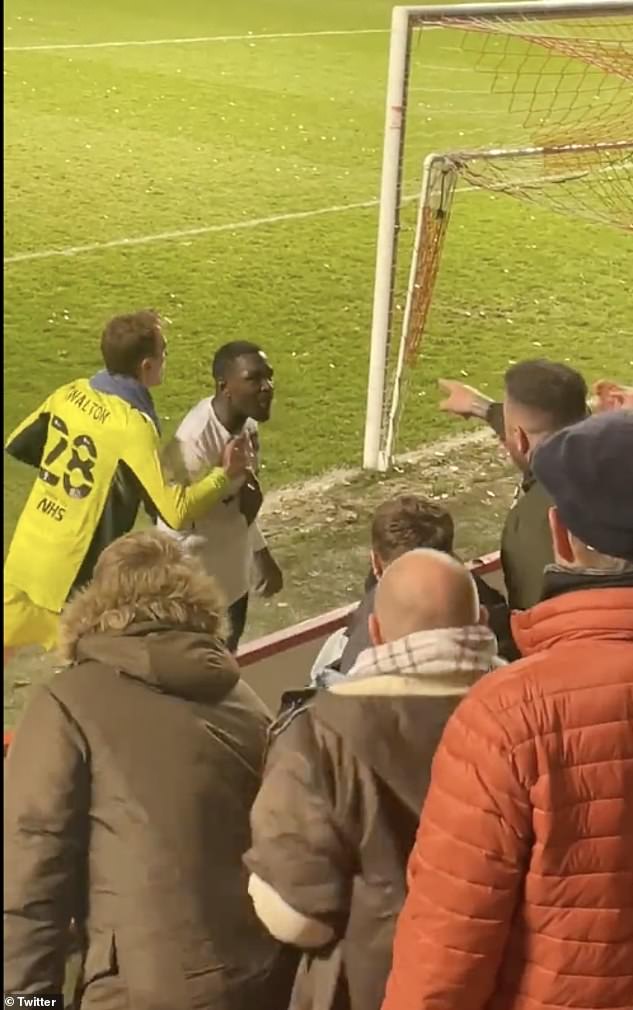 One of those involved in the incident was Toto Nsiala. He was seen trying to speak to the angry fans before being ushered away by Christian Walton 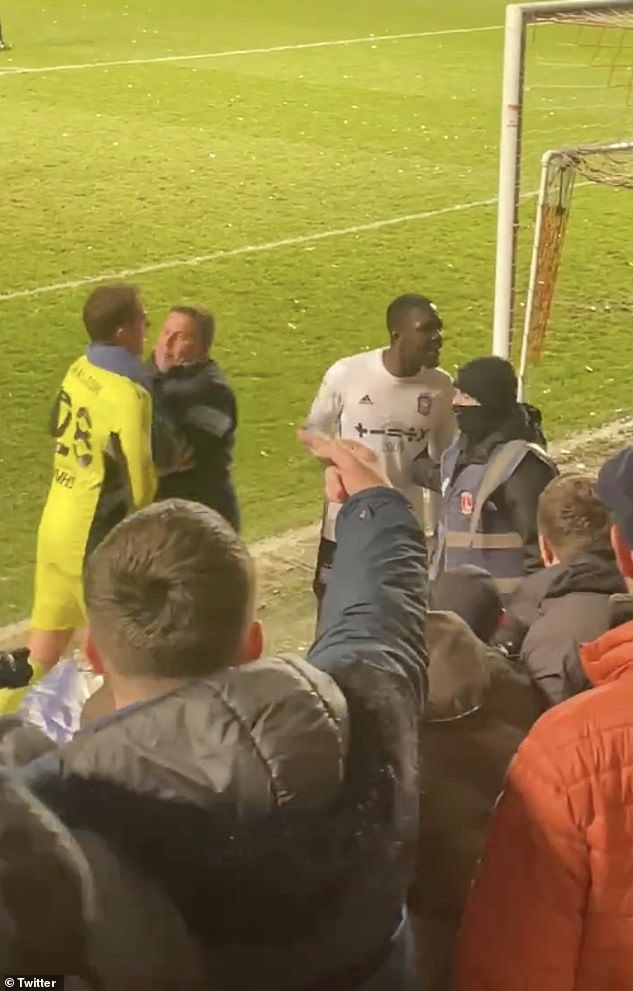 However, Walton who was acting as peace-maker – was then shoved by a supporter, resulting in action being taken by the police

He said: ‘Come Saturday, at Wigan, there will be thousands there again. We as a team have got to be performing better, a lot better.

‘Emotions are high at the moment with the manager going and a couple of results not going the right way. We’ll try and rectify that for the fans.

‘It’s about character now. You’ve got to stand up tall, get your chest out and go again. You’ve just got to take it on the chin and move on. Let’s see what they’ve got come Saturday.’

McGreal went on to reflect on the game, he said: ‘I thought we were in the game for 20 minutes and then you could just sense it going. Obviously they scored the goal. For me it looked onside to be fair, but someone is saying it’s a little bit tight.

‘After that we just lost our way a little bit. We couldn’t get the first pass away, we couldn’t really control the ball. There was a little bit of fear factor.

‘I thought we got it back a little bit just before half-time and I thought we were definitely still in the game.

‘Second half we were own worst enemy. We’re in possession, there’s a turnover and it’s just a simple ball that puts them clean through. That’s been our Achilles heel, especially tonight.’

He continued: ‘Confidence is obviously a bit of an issue at the moment. You don’t need for me to tell you that.

‘It’s our job to pick it up. Training was bubbly yesterday, today the warm-up was very good, they are saying the right things, the energy levels seemed to be there… But the performance was nowhere near long enough or good enough. Charlton were well worthy winners.’

McGreal admitted he would ‘welcome’ some self-reflection among the players within the changing room.

He said: ‘I do welcome that, but the proof is in the pudding. I believe actions speak louder than words. 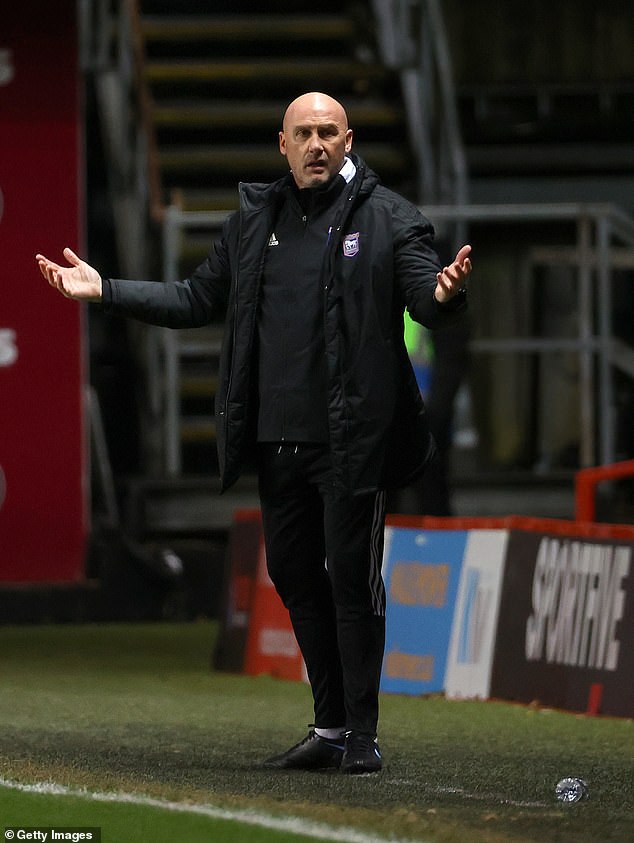 ‘Some of them have played at higher levels. We’ve now got to get them guys back to that high again because there are some good players in there. It’s just about getting that confidence and trying to instil a bit of belief and just energise them.

‘I’ll try my best. I’m in for a couple of games. We’ll see how that goes. My remit is to come in and try and energise the lads, try and get a couple of good results. It hasn’t worked tonight but we’ve got to go again, simple as. In football you win some, you lose some.

‘We’re on a bit of a low at the moment, but you’ve got to go again because the games come thick and fast.’