‘Don’t show up for work if we can’t trust you to be unbiased’: Fans slam Sky Sports pundit Gary Neville after he admitted he won’t call out his ‘mate’ Ole Gunnar Solskjaer despite Manchester United’s poor form

Sky Sports viewers have taken aim at Gary Neville on social media after he admitted he won’t call out his ‘mate’ Ole Gunnar Solskjaer on TV despite Manchester United‘s poor run of form.

Neville, along with his Monday Night Football co-pundit Jamie Carragher, are notoriously forthright with their views, and regularly hit out at managers and players who are underperforming.

With United stuck down in sixth and plenty calling for Solskjaer to be sacked, it is perhaps understandable that many would expect Neville to have some harsh words for his former team-mate, but he has openly admitted that he refuses to call him out. 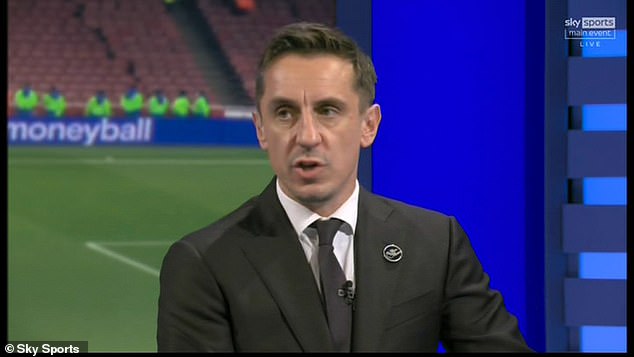 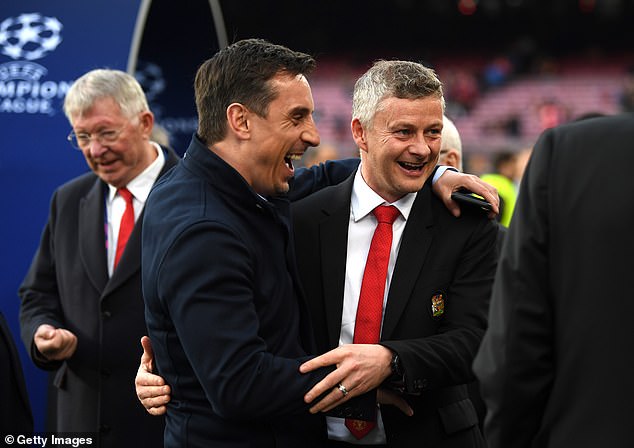 Neville and Solskjaer go way back, having played together at Old Trafford for 11 years

Speaking on Monday night, he said: ‘I’ve got Manchester United fans on my social media all of the time saying, “Gary, he’s your mate. You won’t call him out”.

‘No, I won’t. I won’t call Steve Kean out, or Arsene Wenger at Arsenal. I’m not going to come on this show 11 years later and ask for a manager to be sacked. It’s never going to happen. He’s a club legend. He’s my team-mate. I actually like him a lot.’

Neville’s response infuriated some Twitter users, with one noting: ‘Then how are you getting paid for this? Don’t show up for work if we can’t trust you to be an unbiased pundit.’

Elsewhere, another wrote: ‘Lost respect for you Gary. As a MUFC fan, I would have thought your love for MUFC should come before your fear to criticise your mate.’ 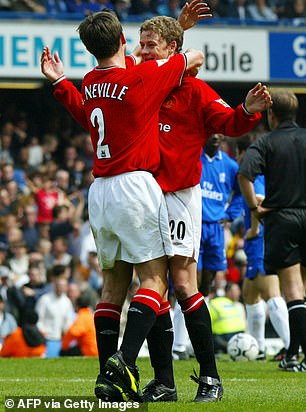 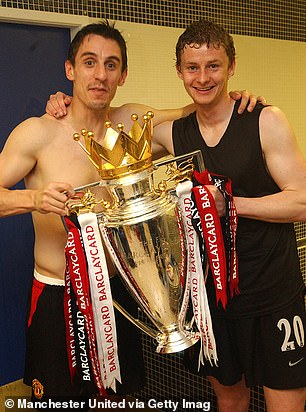 At United, the pair won 12 trophies together, playing under the guidance of Sir Alex Ferguson

One Sky viewer said: ‘Yes Gary, but as a Sky subscription payer, I’m contributing to your wages. Do you really think I want a pundit not to talk about the main issue at United because of their relationship with the manager? Kinda makes it pointless.’

Another social media user asked Sky Sports to ‘address’ Neville’s words, writing: ‘Your “pundit” just admitted on live TV that he’s biased towards a certain club and its personnel.

‘As a pundit, his job is to be objective and impart pure and unbiased takes on football. Care to address this?’

At United, Neville and Solskjaer played together for 11 years under the tutelage of the legendary Sir Alex Ferguson.

In that time, they won six Premier League titles, a Champions League and two FA Cups, including the treble in 1998-99.

Meanwhile, in the wake on United’s 4-2 defeat at Leicester at the weekend, pressure is continuing to build on Solskjaer at Old Trafford.

Speaking about his friend and former team-mate on Monday, Neville added: ‘He (Solskjaer) should be under massive pressure with the squad that has been assembled and the fact he’s been in the job now for two-and-a-half, three years. 100 per cent. 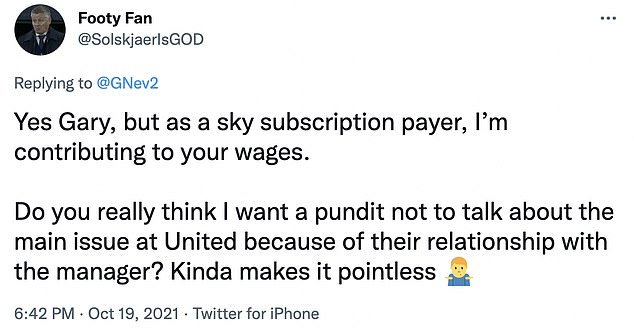 Neville’s comments have sparked fury among some football fans, who took aim on Twitter 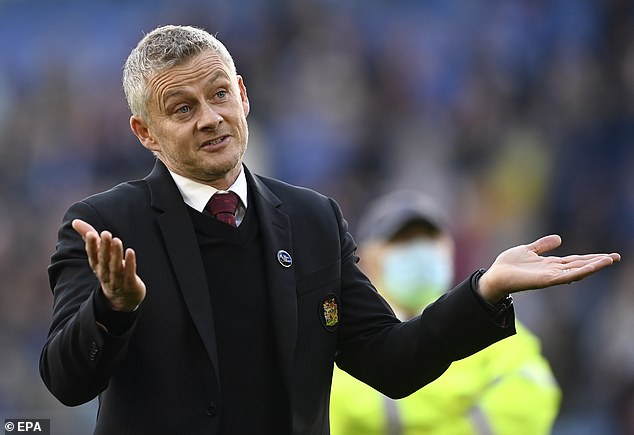 ‘But the club are not going to change him. The club are going to stick with him until the end of the season.

‘Manchester United have failed with two previous managers who have been world class. I think they persist until the end of the season.

‘If he does win the Europa League and the FA Cup, and they finish in the top four, I would still say that’s building a successful team.

‘You’re up against three of the best teams in the world in Chelsea, City and Liverpool, with three of the best managers. Manchester United changing their manager now doesn’t prove anything to me in terms of what could happen.

‘I still think they could struggle against those three teams. But the pressure is building, 100 per cent. It should do. They’ve got to now start to perform, and he’s got to get them to perform.’