Newcastle have revealed the identity of the fan who collapsed during their recent league match with Tottenham as Alan George Smith, 80, whose family say he is ‘fully alert’ and ‘walking about’.

The elderly Magpies fan collapsed with a cardiac arrest during the first-half of the St James’ Park match, which forced the game to be temporarily suspended after the players and match officials were alerted of the incident.

The family of Mr Smith have praised his friend, Don Williamson, who attended the match with him and alerted other fans along with the on-pitch players and officials to the incident.

A defibrillator was carried across the St James’ Park pitch by medical staff and into the East Stand where Mr Smith was sitting, and the 80-year-old was given CPR by fans before being treated by pitchside doctors and was taken to the Royal Victoria Infirmary in Newcastle later that day.

‘We are pleased to advise that Alan is making great progress, is now fully alert and is up and walking about,’ Mr Smith’s son, Paul, said via the Newcastle official website. ‘He will remain in hospital over the next few days while further tests are carried out. 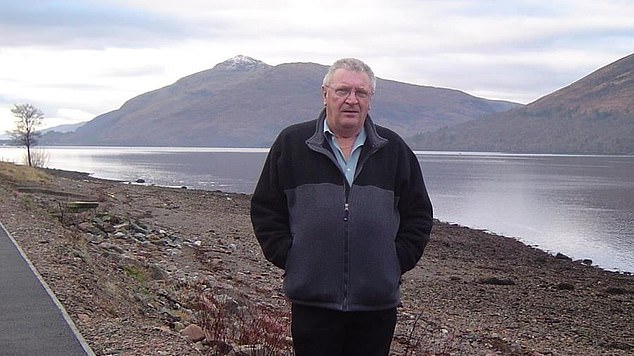 Newcastle have released the identity of the fan who collapsed during their recent game with Tottenham as Alan George Smith, 80, who is now ‘fully alert’ and ‘walking about’ 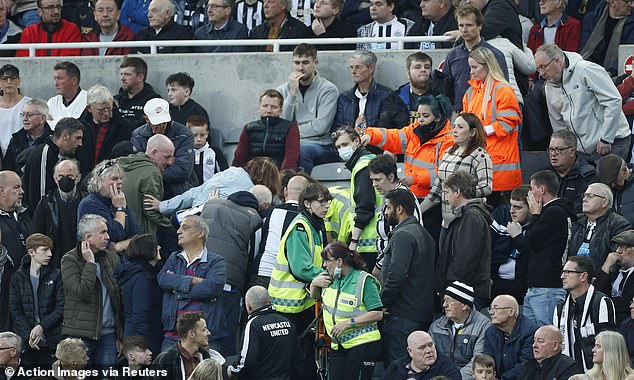 ‘He and our family would like to say thank you to his friend, Don Williamson, who was with him at the time and alerted everyone to his condition.

‘We would also like to thank and pay tribute to the doctors and nurses who administered CPR, the paramedics from North East Ambulance Service, St John’s Ambulance, fans and stewards at the scene, as well the medical staff at the RVI and Freeman Hospital. We will be forever grateful.

‘We would also like to say thank you to all of the people who have wished Alan well on social media and the players and staff of both Newcastle United and Tottenham Hotspur, especially Jamaal Lascelles who has sent a personal message. It meant so much to Alan.

‘He is looking forward to getting back to St. James’ Park as soon as possible.’

The Premier League game between the Magpies and Spurs had begun in a party atmosphere with Newcastle fans celebrating the take over of their club by a Saudi Arabia-backed consortium and the departure of former owner Mike Ashley.

However, the occasion took a very serious turn when Mr Smith was taken ill after 40 minutes.

Hero doctor Tom Prichard, who works in the A&E department of a north-east hospital and also part-time at Middlesbrough’s academy, then went to help Mr Smith, using the defibrillator to try and revive him whilst also giving him CPR treatment. 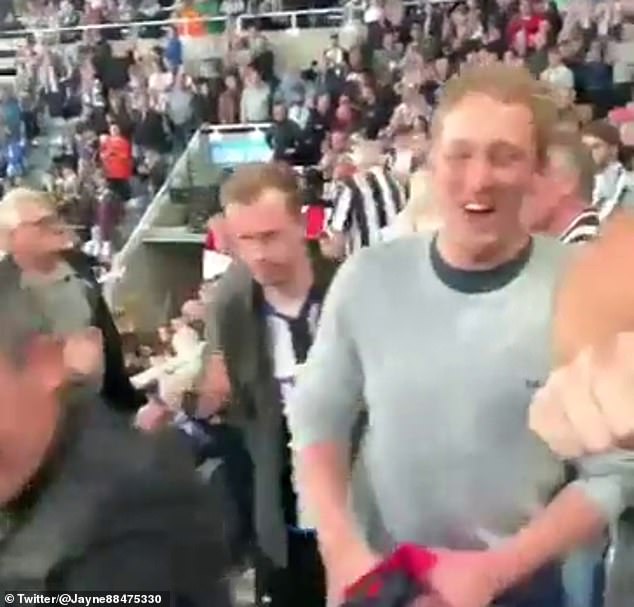 Prichard told the Telegraph that when he reached the stricken man, he was ‘lying on the chairs with no pulse’ and the St John Ambulance had already attached the pads of the defibrillator to his chest.

The first shock did not restore the 80-year-old’s heart rhythm and the doctor continued with CPR. The second shock they administered was successful.

‘It all happened so quickly, to be honest,’ said long-term Newcastle season ticket holder Dr Prichard on BBC Breakfast on Monday. ‘I was sat in the Gallowgate End (next to the East Stand where Mr Smith was located) and I could see something was happening with the fans.

‘They were calling over the stewards and first-aiders, and I could see a lady there doing CPR on someone. 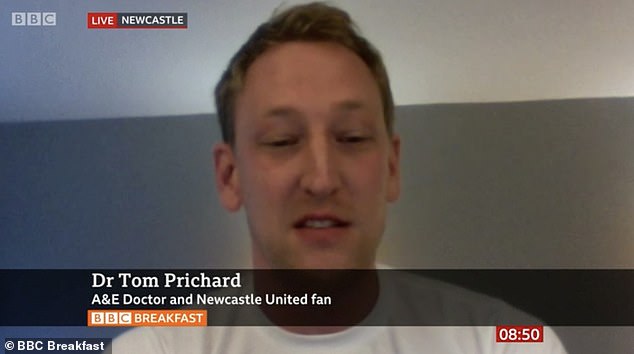 CARDIAC ARREST – WHAT TO DO

A cardiac arrest is when a person’s heart suddenly stops pumping blood around their body.

It causes the brain to be starved of oxygen and the person will collapse suddenly and be unconscious, unresponsive and won’t be breathing or breathing normally – they may make gasping noises.

Without immediate treatment the person will die. If you’re with someone who’s having a cardiac arrest, call 999, start CPR and use a defibrillator if there’s one nearby. Follow the instructions from the 999 operator until the emergency services take over.

Starting immediate CPR is vital as it keeps blood and oxygen circulating to the brain and around the body. A defibrillator will then deliver a controlled electric shock to try and get the heart beating normally again.

For more information go to the British Heart Foundation website.

‘As an A&E doctor I thought I’d better go and offer a hand if I can, and see what help I can give here. So I just got up and went over to help, really.’

Dr Prichard went on to explain that Mr Smith was incredibly lucky, with an intensive care doctor, a cardiologist, and St John Ambulance staff all on hand to assist and save his life.

After he had been stabilised, Prichard went back to his seat and was given a standing ovation by the Newcastle supporter, while Mr Smith was being taken to hospital.

‘I do want to say, this wasn’t just me, so as I say – I had a friend helping out, Matty, another doctor, and the other two doctors,’ he continued on the BBC.

‘St John’s were brilliant, the club doctor came over to lend a hand. It really wasn’t just me, but I will say when I was walking back to my seat and 10,000 fans in the Gallowgate were shouting ‘hero’ at me, that is one of the best moments of my life.

‘The most important thing is, this man got to hospital. I want to stress the importance of early CPR, early chest compressions, early defibrillation, is what saved this man’s life. So if anyone in the public were to see this happen again, chest compressions, CPR is what needs to happen, and try to get a defibrillator there as soon as possible.’

North Tees and Hartlepool NHS Foundation Trust praised the Newcastle fan and A&E doctor on Monday, saying: ‘We couldn’t be prouder of Dr Tom Prichard, one of our A&E registrars, who came to the rescue after a fan collapsed at the Newcastle game yesterday.’

The match resumed once Newcastle fans and the football world had been told that Mr Smith had been stabilised, with Tottenham running out 3-2 winners on Sunday afternoon.

Tottenham’s Eric Dier (left) sprinted to the Newcastle dug-out, gesturing for a defibrillator

Tottenham players Eric Dier and Sergio Reguilon also received a lot of praise on the pitch for their quick-thinking actions, with the latter asking referee Andre Marriner to stop play, with the England international racing to the bench to get the club doctor.

On Monday, Mehrdad Ghodoussi, whose wife Amanda Staveley is leading the consortium of investors which took over the club in a £305m Saudi-led deal, said the fan – whom he named as George – is doing well.

He tweeted: ‘The real hero of the day thank you Dr. Prichard. Thankfully George is now in a stable condition and doing well.

‘I’m sure the whole country is sending him positive vibes and he’ll be back in St James Park in no time at all.’

Manchester United: Fans slam Gary Neville after he admitted he won’t call out his ‘mate’ Solskjaer