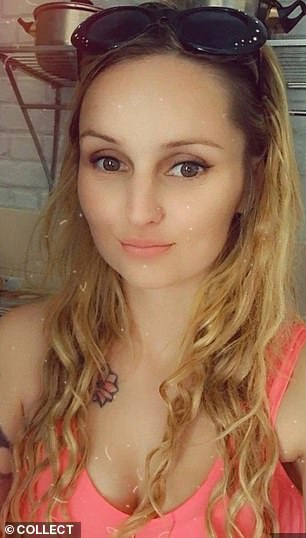 A woman accused of murdering her partner’s six-year-old son ate McDonald’s while the child was forced to sleep on the floor in the hallway in the days leading up to his death, a court has heard.

Arthur Labinjo-Hughes spent a total of 14 hours and 19 minutes in the hallway on June 12 as Emma Tustin, 32, ate in the living room just a few feet away from him.

CCTV footage from the home detailing the alleged abuse Arthur suffered before his death showed Tustin carrying bags of McDonald’s takeaway into the living room as Arthur ‘screamed’ he had not eaten his lunch.

The court heard nine hours later, the child was still on the floor in the hallway as Tustin lay under a blanket on the sofa and watched TV.

At one point Tustin sent her boyfriend Thomas Hughes, 29, an audio clip of the child crying accompanied by a text that said: ‘P***** me off he has. Paused Corrie.’

Hughes replied: ‘Kid is a selfish little c*** I’ll dash my food off his head.’

The court heard that Arthur spent a further 11 hours and 49 minutes in the hallway the following day, June 13.

Tustin and Hughes are accused of ‘poisoning’ the child with salt and making him endure months of abuse before killing him by ‘banging his head against a hard surface’.

In the days before Arthur collapsed with fatal injuries he was forced to spend marathon ‘stints’ in front of the front door, Coventry Crown Court heard. 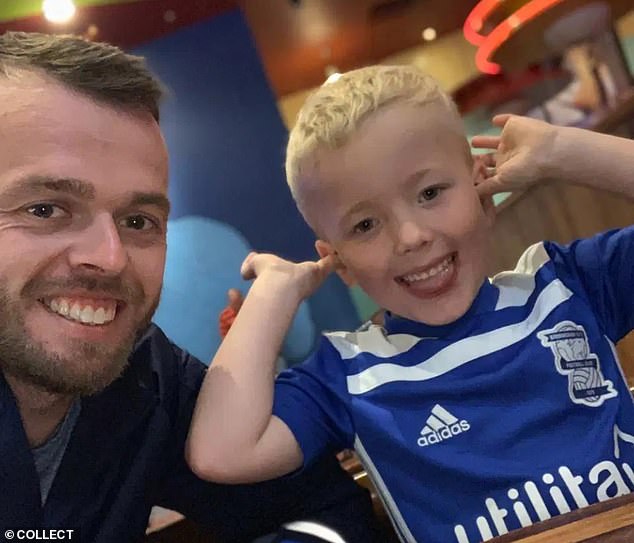 In the week before Arthur (right) collapsed Tustin allegedly rowed about him with Hughes (left), saying: ‘There’s one issue in this house. One person causing s**t’

He was also made to sleep on the floor in the living room despite the fact there were empty beds upstairs, it was claimed.

It was part of the ‘campaign of cruelty’ he was allegedly subjected to before being unlawfully killed, say prosecutors.

On June 13, CCTV from the home showed Hughes and Tustin eating ice cream cones on the sofa and spending time in the hot tub while the child was there.

Earlier in the day Tustin had texted Hughes accusing Arthur of ‘making my life hell’ and claiming she was ‘slowly but surely cracking’.

Arthur Labinjo-Hughes died in hospital several hours after he was found unresponsive at a house on Cranmore Road in Shirley, near Birmingham

Moving on to the events of June 14 prosecutor Jonas Hankin read a text sent from Tustin to Hughes, which said: ‘Still screaming. He said he hates me. He’s gonna spit his sandwich out on the floor when he has it. Loves his nan more than you.

‘He’s just said he don’t f***ing care now saying haha because I said I’m telling you. He said you won’t believe me, you will believe him like before. Now screamed he’s gonna tell his mom to kill me. Just on the phone to Affy.

He said: ‘Glad we aren’t going because I was going to be naughty all day for you.’

The court was told Tustin sent numerous texts claiming Arthur was ‘screaming’, refusing to eat his food, demanding to go to his grandmother as well as attacking her.

The couple also spoke of separating and in one row the jury was told that Tustin sent a text saying: ‘I want you but not him. I’m not being treated like that by him.’

Hughes replied: ‘It can’t be one and not the other. Unfortunately, it’s got to be both or none.’

In response, the court was told, Tustin messaged: ‘Cya.’

On day three of the trial yesterday the jury was shown further text messages, audio and video clips exchanged between the defendants, who rowed multiple times over Arthur.

Miss Tustin made numerous references to being pregnant in the weeks leading up to June 16 and in one message she accused Mr Hughes of ‘turning his back’ on his unborn child, the jury was told.

The court heard a further text to her boyfriend said: ‘You stay with the devil child.’

In the week before Arthur collapsed Miss Tustin allegedly rowed about him with Mr Hughes, saying: ‘There’s one issue in this house. One person causing s**t.’

In texts on June 11 she also made reference to Mr Hughes hitting Arthur as well as kicking a hole in the door, jurors heard.

In one message read to the court Miss Tustin said: ‘Take your precious child who can’t do wrong and f**k off.’ 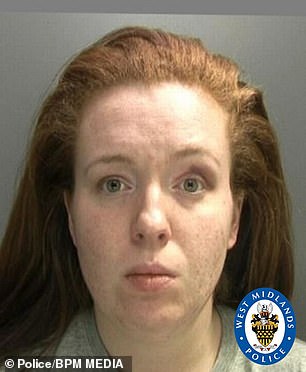 Arthur’s natural mother Olivia Labinjo-Halcrow (left), 26, was previously caged for 18 years after she knifed boyfriend Gary Cunningham (right) 12 times in a drunken rage at their home

The jury was also given a virtual tour of the house as the prosecution began playing CCTV from inside the property during the days immediately before Arthur’s death.

Arthur had been in the full-time care of Mr Hughes after his mother, Olivia Labinjo-Halcrow, was accused of killing her new partner, Gary Cunningham, in February 2019.

She was jailed for 11 years in July this year after being found guilty of manslaughter.

Opening the case prosecutor Jonas Hankin stated Tustin was the ‘only possible perpetrator’ behind the alleged fatal assault on Arthur on June 16 because she was looking after him alone at the time.

He argued Hughes ‘shares culpability’ because he ‘intentionally encouraged’ the killing.

PM relaxes with his paintbrushes on his Spanish Costa getaway