A quick-witted teenager prevented an attempted armed robbery at a service station by convincing him to try another business.

Sophie had only just begun her shift at the St Peters petrol station in Adelaide when a man entered and begun perusing the aisles on Saturday morning.

He approached the 18-year-old cashier and demanded she give him money from the till, warning he was armed with a gun. 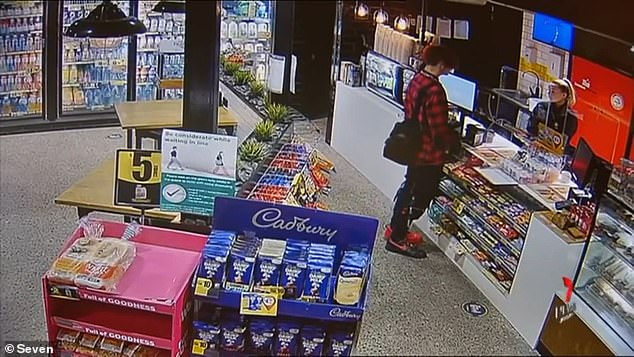 Adelaide woman Sophie had only just begun her shift at the St Peters convenience store when a man approached her and demanded $500, adding he was armed with a gun (pictured)

‘I was in shock but I said “could you just go to the petrol station up the road”, I said please, I begged him.’

In CCTV footage of the hold up, Sophie appears calm and collected as she asks the would-be robber to take his business elsewhere.

‘He wasn’t aggressive or anything and he left,’ the brave teen recalled.

Sophie said while negotiating with the man she was sure not to make any sudden movements in case the man actually had a gun.

The 18-year-old locked the doors of the service station as soon as he left and called the police who arrived in minutes and set up cordons around the area.

The man walked casually out of the petrol station and was last seen heading south, with police sniffer dogs unable to track his scent.

He has been described as a 25 to 30-year-old Caucasian with brown hair and a goatee and wearing a red plaid lumberjack-style shirt, dark pants, black fingerless gloves, and a backpack.

He was charged with aggravated robbery and bailed to appear in the Adelaide Magistrates Court on January 5.

The teen attendant’s simple request for the would-be robber to take his business to another convenience store was surprisingly accepted (pictured, X Convenience store in St Peters)