The words no mother wants to hear…
Advertisement

‘Your daughter Evie is going blind and there’s nothing we can do.’ When actress VICTORIA SMURFIT discovered her eldest child had only a few years of sight left they picked all the places she wanted to see while she still could. Julia Llewellyn Smith hears about their heartbreaking adventure 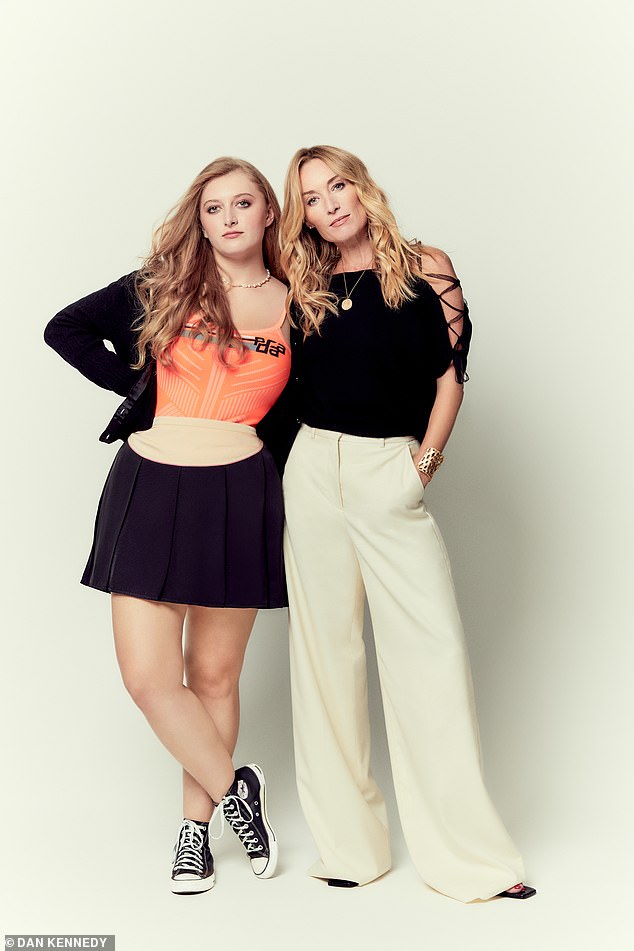 It was a Friday evening when Victoria Smurfit took the call. It was from an optician she’d visited earlier that day. Her daughter Evie, then 12, had complained that at school she couldn’t see the board and glasses weren’t helping.

‘The optician said, “I want you to go and see this eye doctor first thing on Monday. Call him now before the office shuts for the weekend,”’ recalls actress Victoria, 47, a household name for more than 20 years since she starred as barmaid Orla O’Connell in the BBC hit drama Ballykissangel.

The optician wouldn’t tell Victoria why she was making this urgent referral. ‘I said, “You cannot let me go into the weekend thinking my daughter has eye cancer. If you don’t tell me what you think is wrong with Evie I’m going to go to your office and follow you home and every three minutes I’ll knock on your door until you tell me.”’ So the optician confessed she suspected Evie had Stargardt macular dystrophy. ‘She said, “Please don’t google it,”’ Victoria says. ‘So obviously I did.’

Within seconds, Victoria learned her eldest daughter might have a rare genetic eye condition that leads to blindness. There’s no treatment and no cure. ‘I sat on my bedroom floor and broke down. I was hyperventilating as quietly as I could so the kids couldn’t hear me downstairs. It just didn’t seem real.’

The following week, Evie’s diagnosis was confirmed. Evie, now 16, says, ‘I’d had an entire day of tests and I was tired, so I wasn’t actually listening when the doctor broke the news. I remember seeing my parents crying and being like, “Oh, what did I miss?”’

Evie began to grasp how drastically her life would change when she returned to school with an iPad so she could take photos of what was on the board and zoom in on the writing. ‘I was immediately teased and that’s when it sank in there was something really wrong with me,’ she says. As a mum, how did Victoria feel about the bullying? ‘Violent. In my head.’

Four years on from that terrible evening in 2017, mother and daughter are sitting in a West London café laughing and teasing each other. Victoria comes from one of the wealthiest families in Ireland – they made their fortune via paper packaging ‒ but struck out on her own, starring in films such as About a Boy.

Evie is charming and gentle, and happens to have the most stunning green eyes. You’d never know she is perceiving the world differently to the rest of us. ‘My retina cells are dying at a rapid speed,’ she explains calmly. ‘I’m losing sharpness in my central vision and also my tolerance of light. In bright places I have to wear sunglasses.

I see a lot of yellow lights; it’s like there are fireworks in the middle of my vision all the time and I have to look through them.’ I’m sitting right next to her, but she says she can see only dark shapes where my eye and nose are. ‘As a parent, one of the most appalling things is being told you can’t fix what’s wrong with your kid,’ Victoria says. In fact, there’s no way even to slow down Evie’s condition.

‘I had a year of being up at 3am every night, googling, thinking, “There must be something [a solution].” You’re absolutely convinced it’s out there somewhere – stand on one leg, sing “Kumbaya”, stick a candle in your ear – but there’s nothing. It took me about two years to be able to say out loud what Evie had without choking up.’

But more was to come. While Stargardt disease ‒ which affects approximately one in 10,000 people ‒ is genetic, unluckily both Victoria and Evie’s father Doug Baxter (the couple are divorced) carried the gene. It meant their younger two children, Ridley, 14, and Flynn, 12, would need to be tested. ‘Waiting for those results was the longest of my life. When I got the call to say they didn’t have it I fell to the ground. I told Evie first, because I knew for her it was such a 50:50 thing between having company if they did have it and being grateful if they didn’t. But she just said, “I’m so pleased they don’t, because I feel so lonely and I don’t want them to feel that way.”’

No one can be sure how long it will be until Evie loses her vision completely – sight tends to plateau before suddenly worsening. ‘I have days when I have good eyes, and then the next day my sight will have completely dropped. And once it’s gone, it’s gone,’ Evie says. ‘Usually, when there’s a drop we literally drop too – on to the floor, have a big cry, hug and try to talk through it,’ says Victoria. Evie says, ‘Whenever I see a beautiful view, I think, “Wow, this is really cool,” but then, immediately, I am hit by fear because I wonder, “Is this the last time I’ll be able to see it? What if this memory is all I’ll have left?”’ She adds, ‘It’s horrible. There are times when I am just consumed thinking about it.’ 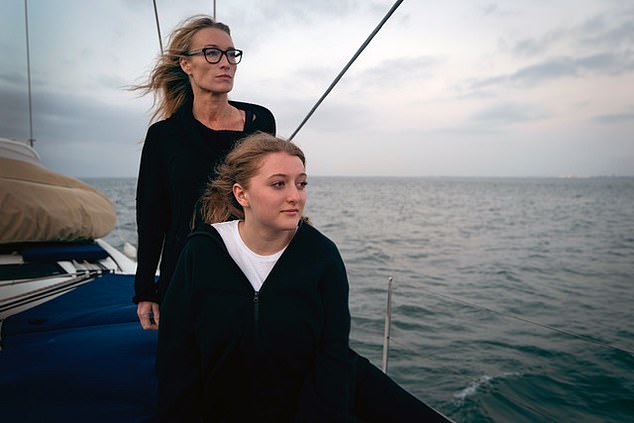 Victoria and Evie in Portugal earlier this year

Victoria continues, ‘That’s why it’s important she sees as much of the world as she can while she can, so these memories are burned into her brain going forward.’ Two years ago, Victoria decided to move her family back from Los Angeles (where they’d been based for Victoria’s work) to the UK because it would be easier for Evie to enjoy an independent teenage life in London where she could get around without the need to drive. The pair intended to spend every school holiday seeing as much of the world as possible – a visual bucket list – but then came the pandemic and everything stopped… and Evie’s sight got worse.

‘There was a time during lockdown when her vision dropped. Evie took a real hit and said to me, “Mum, I only have a certain amount of time with my sight and now all I have are the same four walls.”’ Victoria says. ‘It was shocking. I went, “Er…” while my brain was skipping, trying to work out what to do. I made her a promise that as soon as we were allowed to travel, we’d go.’

Sure enough, once the travel restrictions eased in May, the pair were off to Portugal, driving across the country in a camper van. They walked with wild horses, drove around Lisbon in a tuk-tuk, went surfing and (legally) spray-painted a wall with graffiti. ‘Predictably enough, I drew an eye,’ Evie says.

‘She’s a great travelling companion,’ Victoria says. ‘We’re like Thelma and Louise without the deaths at the end.’ Spend any time with them and it is clear that joking helps them cope with this nightmarish situation ‒ both mother and daughter share a deliciously dark sense of humour.

Yet there were bittersweet moments such as when they climbed a hill to view the capital. ‘On the way up I’d been thinking, “Oh, there’s going to be a beautiful view,” but when we got there I couldn’t see it,’ Evie says. ‘So Mum described it to me: “You see that big brown splodge over there? It’s a castle.”’

Now, more trips are planned, first to Kenya this month, then – Evie hopes – to Japan. Also on the long list are pretty much every European capital, Mumbai, St Petersburg, North and South America and Australia. ‘I’d like to spend time on a Greek island and visit Greenland to see the Northern lights, or Canada and live in an igloo,’ Evie says. 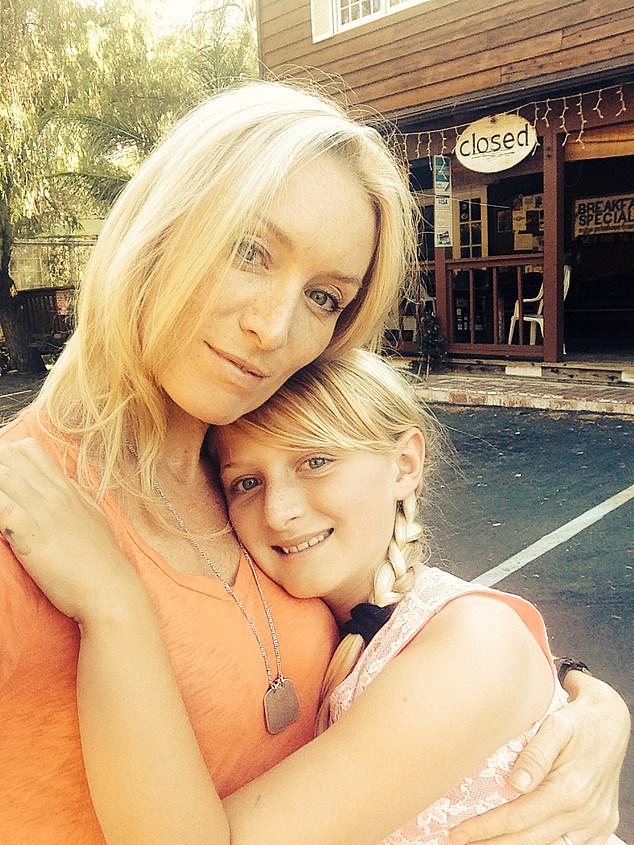 Victoria and Evie in Malibu, California, 2014

Their travels are being recorded for a documentary film The Sightseers by award-winning director Hernán Zin, and Evie’s also discussing writing a book. The aim isn’t just to make memories but also to push fundraising for research and give hope to others in her position, something she already does in her role as ambassador for the charity Fighting Blindness – who are partnering with Specsavers to research the impact the pandemic has had on eye health.

‘I want some other kid who has been diagnosed to be able to look at me and see I’m OK and know they will be too,’ she says. ‘When I was diagnosed, I spent days googling Stargardt disease to find people, or celebrities, who have it, and when I got no results I felt the loneliest person in the world.’

This determination to make a difference has stopped Victoria and Evie sometimes being overwhelmed with despair. ‘As a kid it’s all super hard,’ Evie says. ‘You’re only just discovering the world and now, all of a sudden, there’s this new factor and you think, “Do I let this disease consume me as a person or do I become someone stronger than my vision and stronger than the endless dread when it comes to wondering what I will be able to see tomorrow or the next day?”’

For now, Evie’s happy at sixth form in her London school, to which she can travel alone on the bus and where she’s made great friends. ‘I’ve found people that I can truly be myself with, even with the disease, and that can be very rare because sometimes people get uncomfortable with disability, or see you in a different light.’

Do I let this disease consume me? Or do I become stronger?

Like all teenagers, Evie hates the idea of being singled out. People often fail to understand her condition, since it’s not visible, with one woman recently bawling her out on the bus for sitting in a disabled seat. Victoria says, ‘Instead of going, “Yes, I can sit here,” Evie was mortified and got up and moved.’ But Evie says a white stick or a badge ‘would be my worst nightmare. I know it would be convenient but I also don’t want people treating me differently because then they’ll think I’m different to them. And I don’t want people calling me “brave”. I know it’s meant as a compliment, but it just sounds so condescending. My favourite reaction is when someone just says, “That sucks.”’

You can see Victoria struggling both to protect her daughter and let her spread her wings. When Evie goes to the bathroom, she hurries after her to check she can find it down a dark corridor; returning, she realises Evie has it sussed. ‘Dealing with the emotions can be very hard,’ Victoria says. ‘Sometimes she gets cross with me, which is fair enough, but she can be as mean as she wants because it’s my job to love her unconditionally. I never know – is it the frustration of what she’s going through or is it just normal hormonal stuff?’

I won’t say ‘brave’, but I still can’t imagine a family dealing better with the horrible blow life’s dealt them. ‘Well, either you’re a victim or you’re Superwoman,’ Victoria says. ‘You let your perceived flaw be your superpower. Evie’s a rock star.’

To learn more about Evie and Victoria’s journey, about Stargardt disease and Fighting Blindness, visit thesightseersfilm.com

ANNA MIKHAILOVA: No shortage of turkeys at Tory conference (but Christmas is another matter)