Brooklyn Beckham has landed himself in the middle of a furious foodie frenzy after baffling Today show viewers by appearing on a live cooking segment – during which he simply ‘assembled a sandwich’.

The 22-year-old photographer appeared on the US programme on Wednesday morning, when he shared his ‘recipe’ for an English breakfast sandwich, a dish that he ‘learned from his great-grandma’.

Explaining that he developed a passion for cooking while in lockdown, during which he began posting videos of himself whipping up different dishes on Instagram, the eldest child of David and Victoria Beckham then ran hosts Hoda Kotb and Carson Daly through his sandwich-making process.

But while the Today hosts were quick to praise his simple creation, viewers were up in arms over the decision to feature such an easy-to-assemble dish, with many branding the clip ’embarrassing’ and ‘painful’. 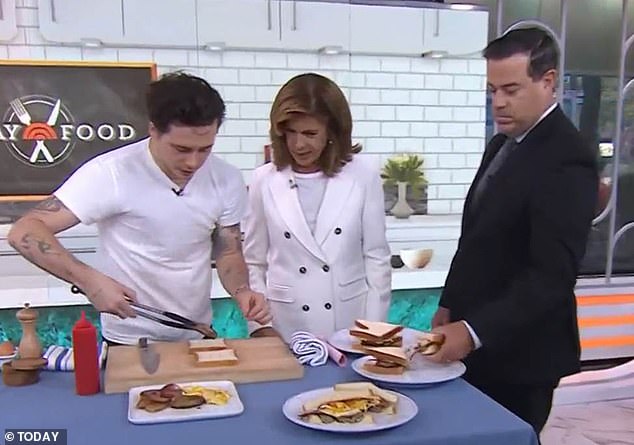 Culinary whizz? Brooklyn Beckham left Today show viewers stunned on Wednesday as he made a sandwich during a cooking segment 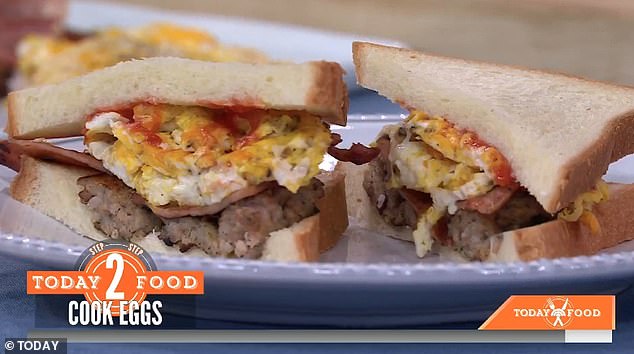 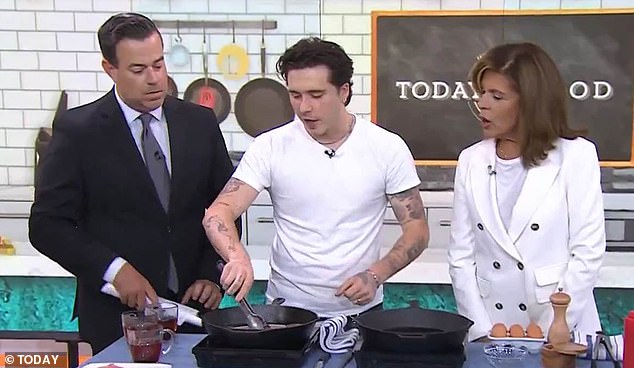 Oh dear: Viewers were up in arms over the segment, with many criticising the 22-year-old’s cooking skills and his decision to break the eggs yolks, citing his dislike of runny eggs 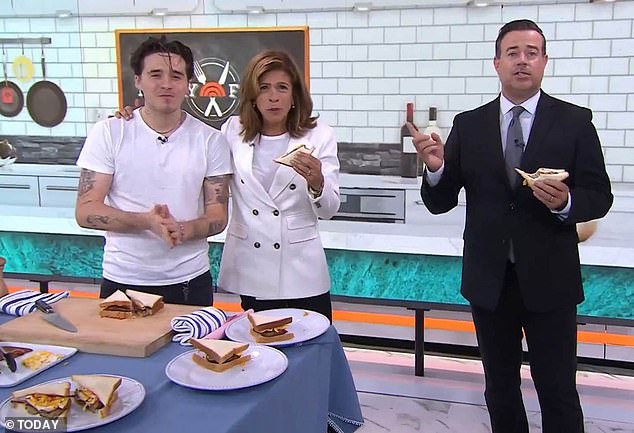 ‘Embarrassing’: Others suggested that Brooklyn should never have been featured on a cooking segment – particularly when there are so many chefs struggling for work because of COVID

At the start of the segment, Brooklyn was seen telling viewers about dad David’s love of food, before waxing lyrical about his ‘favourite’ cast-iron skillet, which was already filled with pre-cooked sausages and bacon rashers.

He added that his love of cooking began to flourish during quarantine, when he began posting videos of himself making different dishes on his Instagram account.

‘I’ve always loved food and obviously when quarantine hit I just really started to get into it,’ he explained.

‘My fiancee (Nicola Peltz) started filming me and I started posting it and it’s just something I love doing.’

Brooklyn then began preparing the sandwich ingredients – and it was here that viewers’ online mockery really took off, with social media users blasting everything from his hatred of ‘runny eggs’ to the lack of butter on the bread.

‘Brooklyn Beckham went on tv to show his culinary skills and cooked……a breakfast sandwich! I am done!’ one person wrote on Twitter, while another chimed in: ‘Brooklyn I can’t believe you never left the egg runny!!! You just ruined a good sandwich.’

Entertained: Viewers were quick to take to Twitter to express their surprise at Brooklyn’s menu of a breakfast sandwich with ketchup 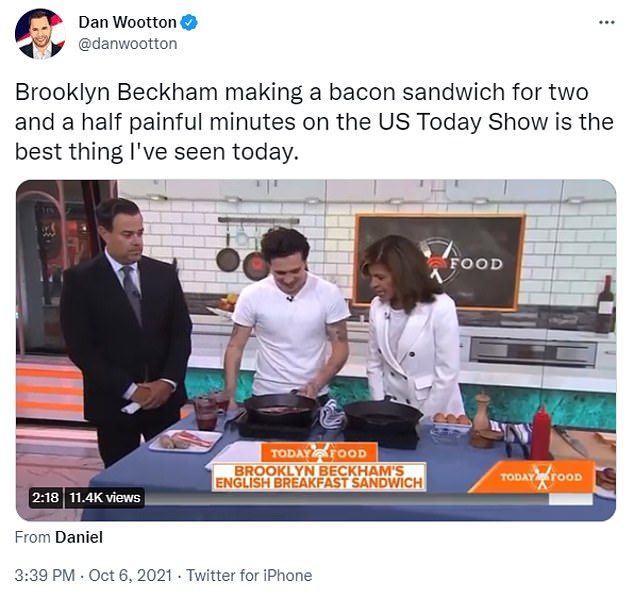 Chiming in: MailOnline columnist Dan Wootton described the segment as ‘painful’ on Twitter 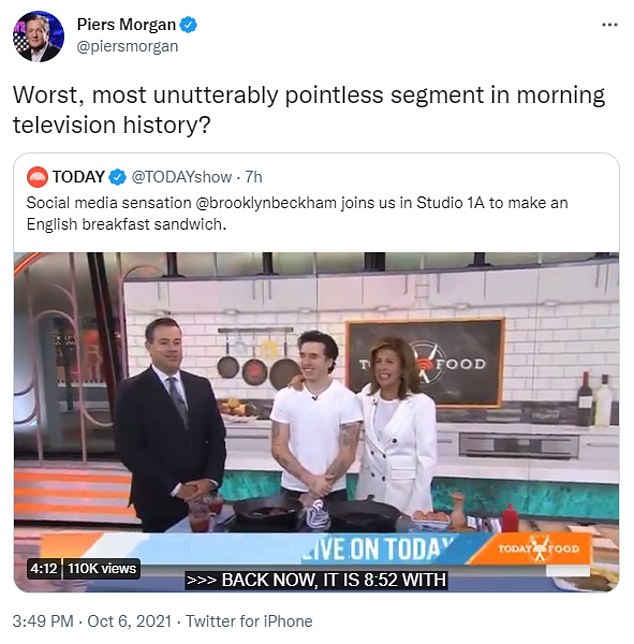 The photographer and model shared several ‘tips’ during the preparation of the sandwich, revealing that he likes to cut his sausages down the middle so he can cook the insides, and explaining that he uses his fingers to poke the egg yolks so that they cook up and don’t stay runny.

Despite appearing on the programme to showcase his cooking skills, Brooklyn didn’t actually cook any of the meat for the sandwich, instead using pre-prepared bacon and sausages for the filling – although he did fry the eggs live on-air.

The two-and-a-half-minute-long segment concluded with Brooklyn stacking up his pre-prepared meat on a piece of unbuttered, untoasted white bread, before adding the fried eggs, and then completing the dish with a very generous helping of ketchup and a second piece of bread.

Although the celebrity offspring went on to share a second recipe – for steak quesadillas – his breakfast sandwich creation was all that social media users could talk about, with several slamming the Today show for featuring Brooklyn when there are so many ‘talented’ and ‘qualified’ chefs struggling for work as a result of the pandemic.

‘This can only be topped by “how I learned to wipe my own backside at 20″…You all optimise embarrassing celeb culture,’ one person tweeted in response to the clip.

‘Actual chefs: train for years to perfect flavour and skill. Brooklyn: son of famous people who whacks s**t in bread,’ one said.

Another then wrote: ‘This has got to be a joke. Always wanted to be a chef, you f*****g muppet you can’t even cook an egg. My years of experience and world class training would humble the f*** out of you.’ 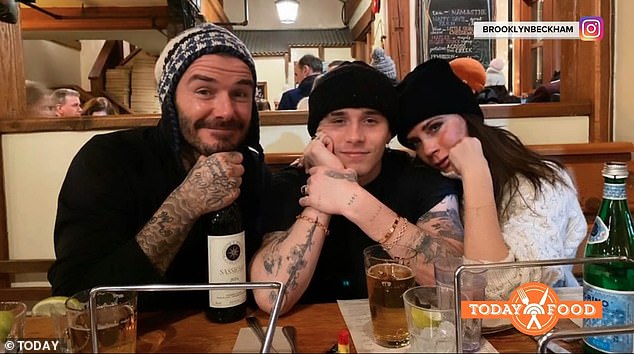 Family affair: Meanwhile, Brooklyn gave an insight to life at home with one of the most famous families in the world, saying father David was a better cook than his mother Victoria 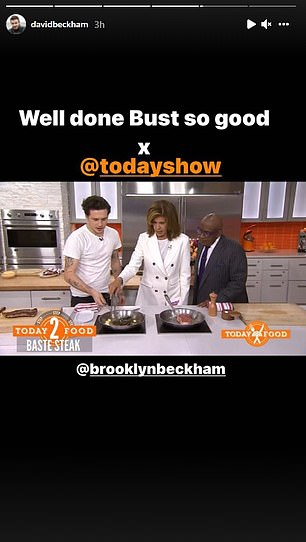 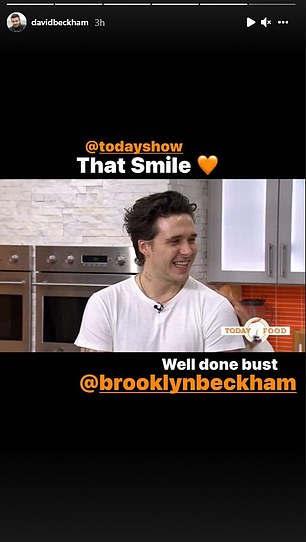 Proud: Brooklyn’s dad David – who calls his son Buster – was full of praise for his son’s Today show appearance, insisting on Instagram that it was ‘so good’ while gushing over his smile

‘Brooklyn Beckham (son of David & Victoria) came on Today show to share his (new) passion for cooking,’ one commented. ‘He made a breakfast sandwich. With a ketchup drizzle.’

Another chimed in: ‘Watching Brooklyn Beckham cook on the Today Show and it’s extremely painful how bad he is at this.’

‘Brooklyn Beckham is on the Today show, cooking breakfast. Gee, I wonder how that happened,’ wrote another.

One other person wrote: ‘I’d be embarrassed if I were @brooklynbeckham. Making a breakfast sandwich with ketchup on the Today Show.’

And someone else tweeted: ‘Seriously? Embarrassing for everyone involved. Who paid who to get this aired?’

‘Brooklyn Beckham making a bacon sandwich for two and a half painful minutes on the US Today Show is the best thing I’ve seen today,’ Dan tweeted, while Piers wrote: ‘Worst, most unutterably pointless segment in morning television history?’

Think you can cook it like Beckham? Brooklyn reveals the VERY simple ‘recipe’ for his ‘special’ English breakfast sandwich

1. Add the olive oil to a cast-iron skillet set over medium heat, place the bacon in the pan and cook 3 to 5 minutes, or until crispy on both sides. Remove bacon and place onto a paper towel-lined plate to remove excess grease.

2. Then add sausages into the same pan, searing evenly on all sides. After about 2 to 3 minutes, slice them in half while keeping the two sides attached and cook the inside until crispy. Remove from pan and place onto plate with the bacon.

3. Add 2 eggs into the same skillet and season with salt and pepper. These should cook quickly with the existing oil in the pan.

4. Assemble all ingredients on top of the bread to make two sandwiches, drizzle with ketchup, cut in half and serve. 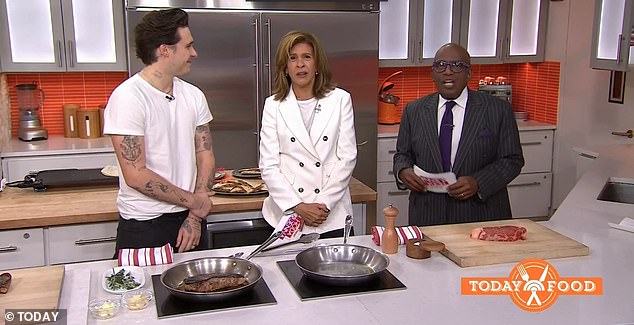 Something else: As well as his breakfast sandwich, Brooklyn also shared his recipe for steak quesadillas – although they didn’t cause quite such a stir online

In a post shared on the Today show website, Brooklyn further detailed his very simple process for recreating the English breakfast sandwich, explaining that the dish is incredibly special to him because it was passed down by his great-grandma.

‘This was a dish I learned from my great-grandma, and I cherish it because it reminds me of my childhood,’ he wrote. ‘It’s a traditional English breakfast sandwich and I love making my American friends try this English staple.’

Brooklyn then detailed his four-step ‘recipe’, which begins by adding olive oil to a cast-iron skillet, and finishes with a ‘drizzle of ketchup’.

Meanwhile, Brooklyn gave an insight to life at home with one of the most famous families in the world.

The model said his father David Beckham, 46, was a better cook than his mother Victoria, 47, during an appearance on The Today Show on Wednesday.

He said: ‘My dad. He likes to cook anything — risotto, pasta, loves steak.’

Brooklyn took to Instagram during lockdown to share videos of himself cooking after his passion for food developed while at home during the pandemic period.

He has previously pursued a career in photography and even briefly attended Parsons School of Design in New York City. 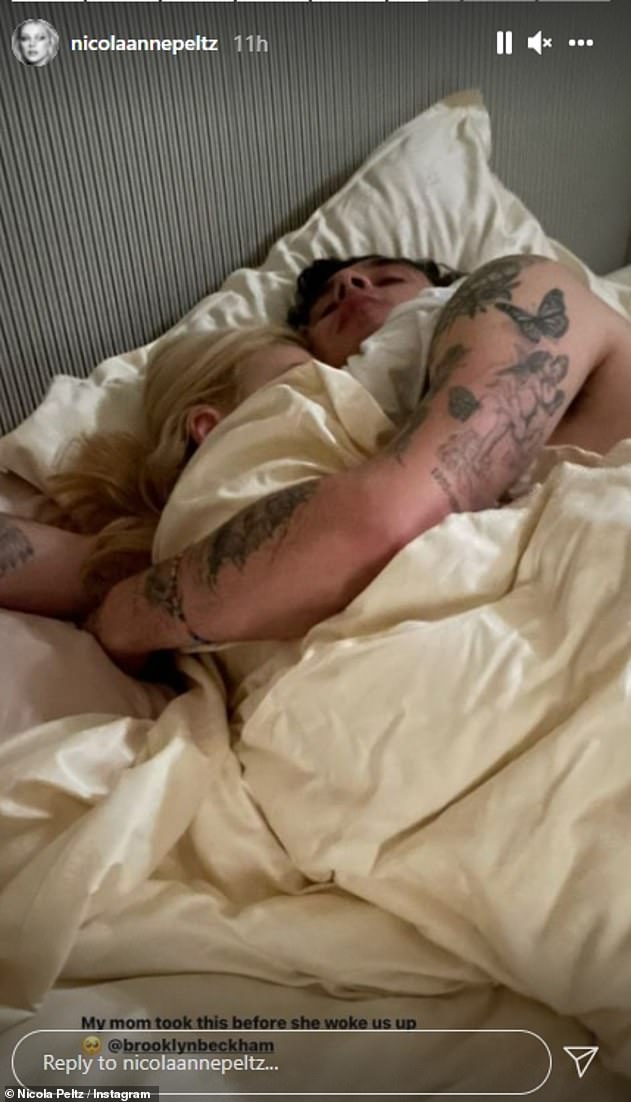 Sweet: Brooklyn’s fiancee Nicola shared an intimate photo of herself and her beau sleeping in their bed while visiting Paris 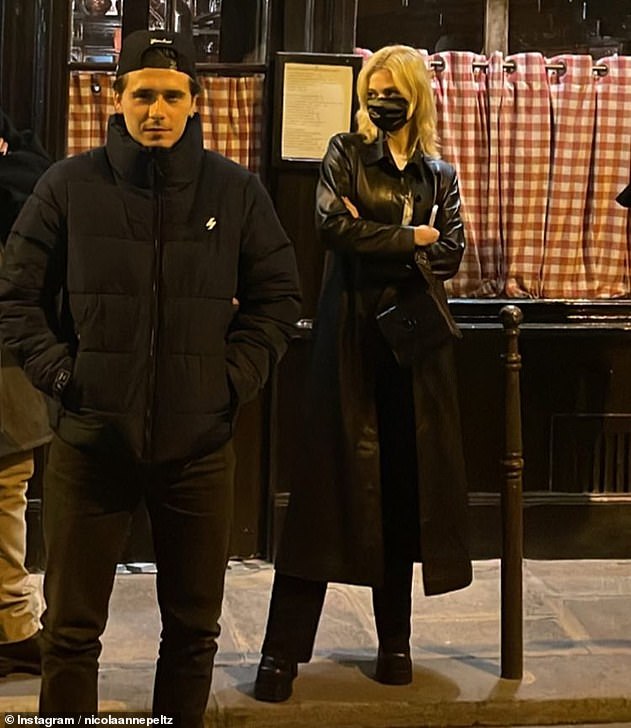 French culture: Brooklyn and Nicola jetted off to Paris last week and they didn’t hesitate in immersing themselves into the culture 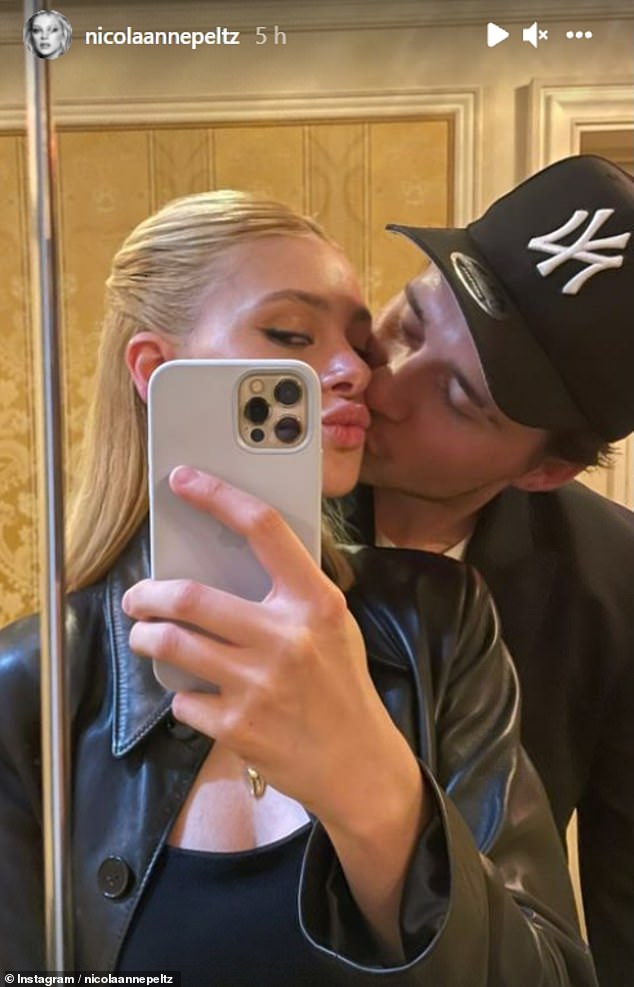 Romantic: Brooklyn and Nicola have been documented their time abroad together on Instagram

Brooklyn and Nicola, 26, visited Paris last week for Fashion Week and Nicola took to her Instagram page to share an intimate picture of the couple in bed.

Explaining ‘my mom took this before she woke us up’, Nicola could be seen curled up in her topless beau’s arms.

The blonde bombshell then shared two behind-the-scenes photos of herself getting ready for last week’s Valentino show in the French capital.

The loved-up couple jetted to Paris during the city’s fashion week after receiving coveted invites last month to the New York Met Gala.

After arriving in France on Thursday the young lovebirds flung themselves into the city’s culture.

Nicola shared a candid moment of her and Brooklyn outside a Parisian restaurant, Chez l’Ami Louis, via her Instagram.

The eatery has been called ‘the world’s most famous bistro’ and serves meals in a traditional French setting.