Families across Britain were urged to wrap up warm on Bonfire Night tomorrow as temperatures plunge to -3C (27F), but forecasters expect ‘fine viewing conditions for any fireworks’ with most places expected to be dry.

The start of November has brought a significant drop in temperatures from the previous week, with many parts of England and Scotland experiencing overnight frosts and struggling to get into double figures during the daytime.

And that pattern of below-average temperatures is likely to continue for the rest of this month, with forecasters expecting that high pressure near Greenland will help to push colder air from the North towards the UK.

This week has already brought sub-zero temperatures of -2.5C (27.5F) at Hurn in Hampshire yesterday and -1.8C (28.8F) at Benson in Oxfordshire on Tuesday – and similar lows are set to follow. It comes after above-average temperatures last week that peaked at Chillingham in Northumberland on October 27, which got to 18.4C (65.1F).

It will therefore be very cold tomorrow night, with Met Office meteorologist Aidan McGivern saying: ‘For Bonfire Night most places are looking dry. It will be cloudier for the North and the West with some north-western areas a few outbreaks of mainly light rain, but clear and chilly elsewhere so fine viewing conditions for any fireworks.’ 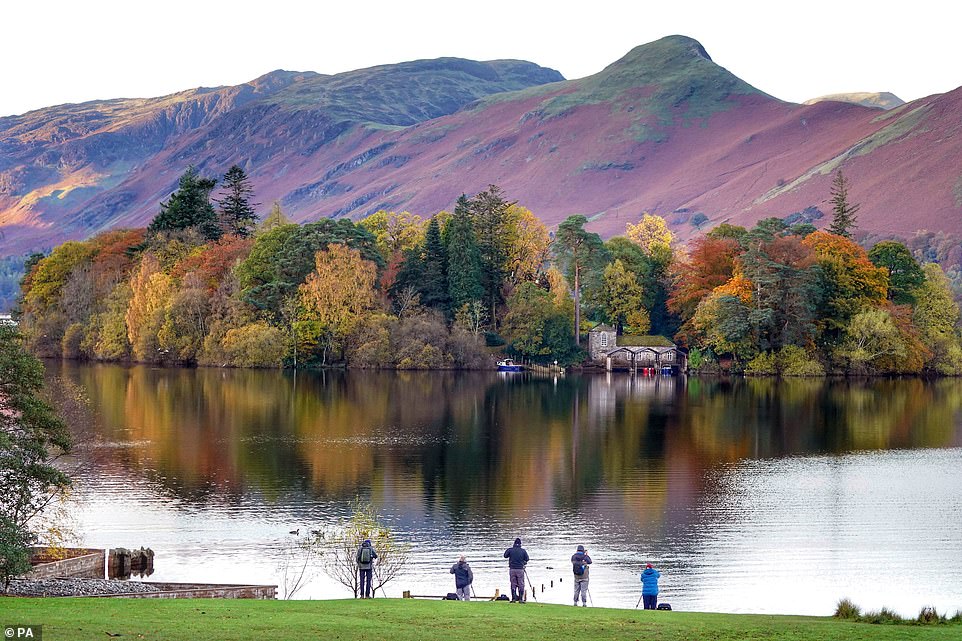 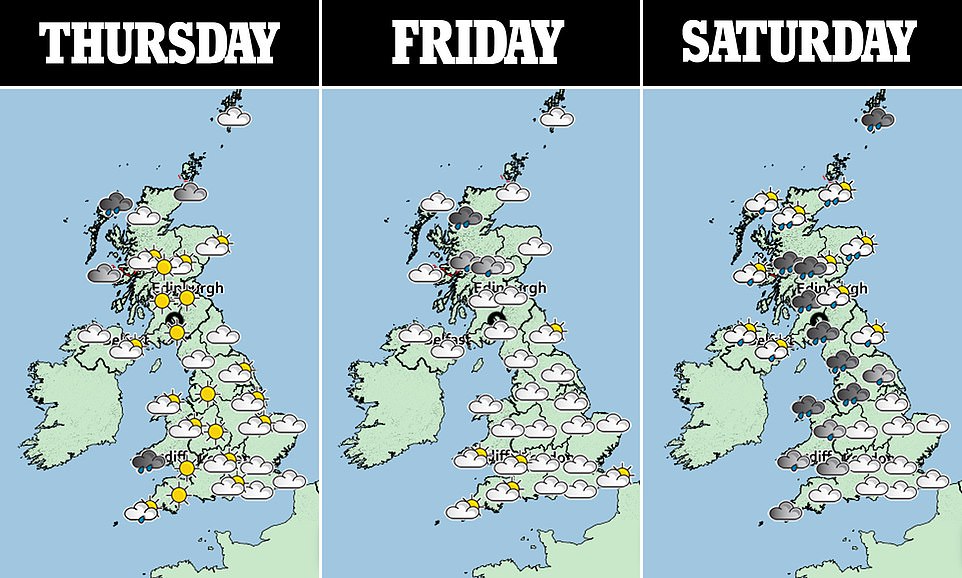 This morning, early patches of mist will soon lift and clear – and it will then be chilly but mostly dry and bright with long spells of sunshine, although cloud cover will build across Northern Ireland and Scotland bringing drizzle.

There is a chance of showers for coastal areas and it will be a blustery day for all parts of Britain – before a mostly dry evening with clear spells, despite some outbreaks of rain spreading into North West Scotland. 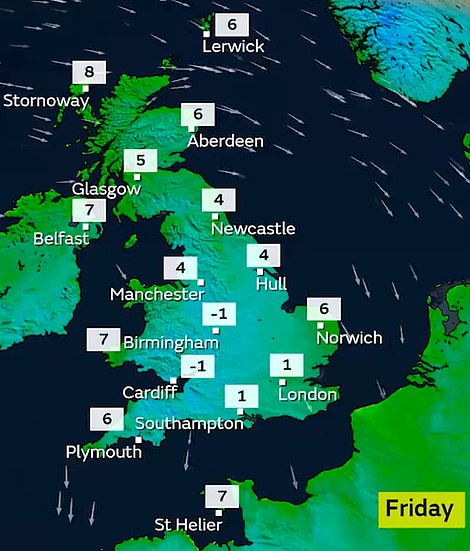 Overnight will then be dry for the UK with clear spells, although variable amounts of cloud will tend to build and sink southwards bringing some patchy light rain or drizzle, and patches of mist will also form.

Met Office meteorologist Clare Nasir said: ‘A quieter day all round on Thursday with some sunshine, although it will be a chilly start. Still some showers in the forecast particularly along the coast but there will be fewer than the last few days. Expect a frost particularly across southern Scotland as well as northern England, perhaps even with some mist and fog patches to start the day. And just away from the city centre of Glasgow you could see a frost here, so a chilly start for Scotland.

‘Showers continue for Northern Ireland particularly towards the north as well as the east running down the Irish Sea towards Devon as well as Cornwall.

‘Inland though some clearer skies – a fine start to the morning on Thursday with some brighter skies, but showers continue with that brisk wind coming in from the North across eastern counties of England and they will continue through the morning into the afternoon.

‘Inland it’s going to be a dry day, a pleasant day – lots of sunshine, and we lose the shower risk across much of Scotland as well as more cloud just pushes in from the Far North West with some patchy rain arriving across the Outer Hebrides later. 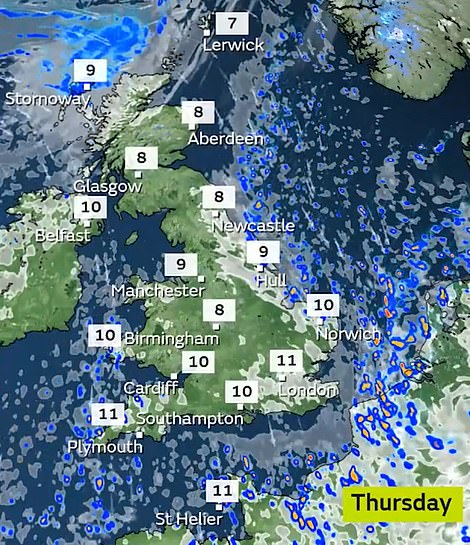 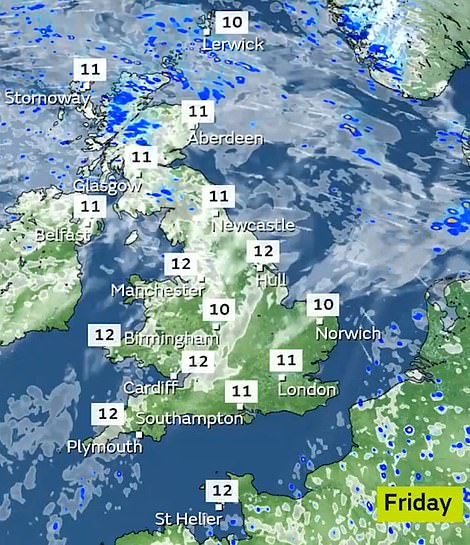 Daytime temperatures will struggle to get into double figures today (left), but will be slightly higher tomorrow (right) 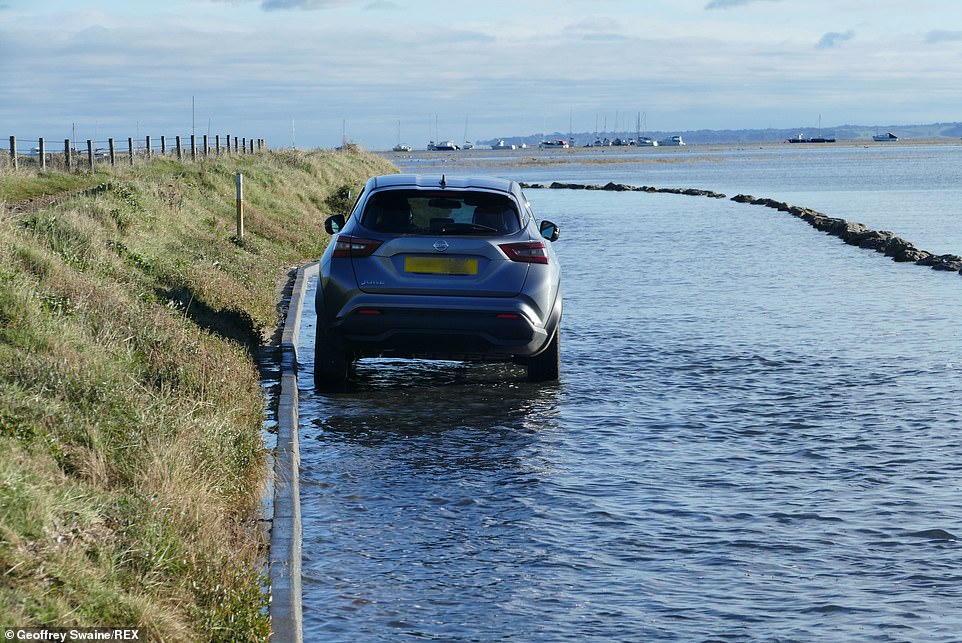 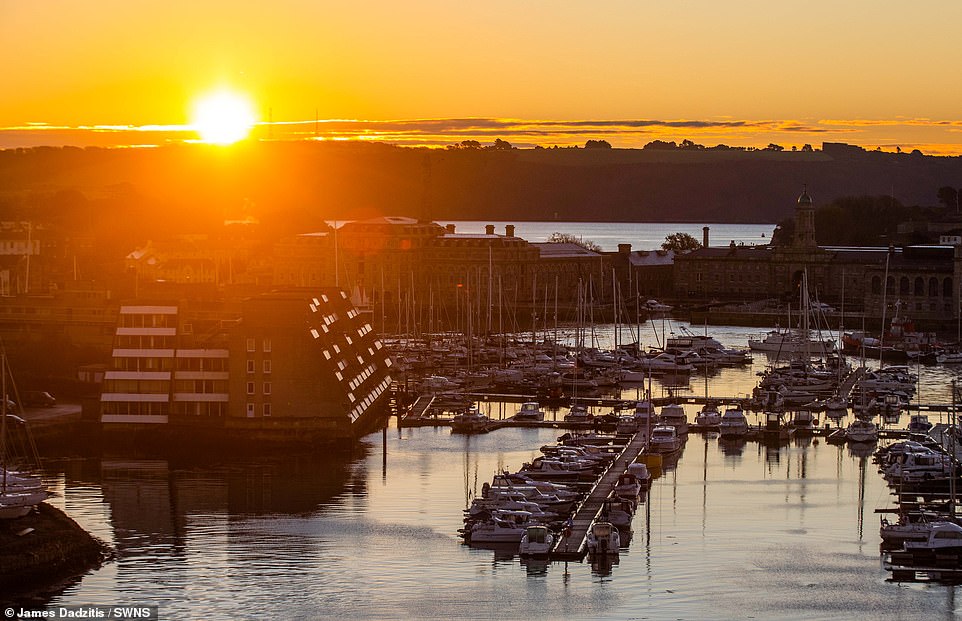 The sun rises over the Mayflower marina in Plymouth, Devon, this morning at the start of another cold November’s day

‘For the central belt of Scotland down towards northern England, east Wales, the Midlands, central and southern England, the best of the sunshine here – but showers will continue particularly where you see that wind along the coast through the afternoon.

The Southern Lights! Aurora puts on a mesmerising display – and are visible as far down Britain as Devon

Britons were left astounded last night as the Northern Lights put on a mesmerising display and lit up the night skies as far south as Devon.

The stunning aurora saw streaks of green light glowing across parts of Scotland and Northern Ireland and northerly parts of Wales and England after a solar flare was spotted heading to Earth.

According to the Met Office, a coronal mass ejection (CME) was seen leaving the Sun on Tuesday, and it reached Earth on Wednesday evening. 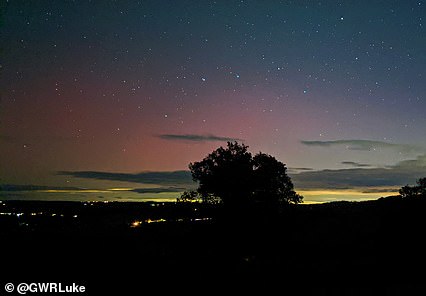 The Northern Lights visible near Crediton in Devon last night

When charged particles from the Sun meet the Earth’s magnetosphere, it generates a geomagnetic storm that produces eye-catching light shows, but the displays are usually limited to high-latitude regions around the Arctic and Antarctic.

But when the solar flares or coronal mass ejections are particularly strong, these shows can appear at lower latitudes – and many cloud-free and low-light pollution areas across the UK this evening, with the displays spotted as far south as Bedfordshire.

There has been a marked increase in larger flares that can cause more southerly aurora in recent months, with the most recent on Thursday, October 28 – known as the Halloween storm.

Tomorrow will see early patches of mist soon lift and clear during the morning. It will then be mostly dry but dull and cloudy during the day although cloud cover will break at times and some bright or sunny spells will develop. There will be some patchy light rain and drizzle across western Scotland.

Ms Nasir said: ‘Now through Thursday evening and overnight a fairly widespread frost inland yet again. Again though showers just peppering the coast of the East as well as the West. Inland it will be dry.

‘And then we will see more clouds along the Far North of Scotland, some patchy rain here for the North West as well, particularly on the upslopes.

‘Temperatures not as low here, and certainly through the day on Friday, with a ridge coming in from the West, many areas seeing some dry conditions as temperatures rise to around 11C, 12C.

‘Not a bad day, although there will always be more cloud and some dampness in the air across the Far North and North West.’

Saturday will continue generally dull with cloudy skies and outbreaks of rain will sink southwards across Scotland and Northern Ireland.

Early rain will soon clear southwards on Sunday, and it will then be mostly dry with sunny spells and variable amounts of cloud. There is also a chance of a few showerS.

Ms Nasir said: ‘All change on Saturday, gales for the North as well as the West of Scotland, outbreaks of rain which will sink their way southwards. A breezy day wherever you are, but temperatures slightly higher yet again.’

In the Met Office’s outlook for the first half of November, it says: ‘Blustery showers are possible in the far east and northeast at the start of the period, but these quickly clearing. Otherwise, plenty of fine, dry weather with long spells of sunshine.

‘Feeling colder initially, with frosts possible, especially in the north. Rain and thicker cloud will then steadily encroach from the west. Areas of low pressure lying to the north or northwest of the UK will then bring unsettled conditions, predominantly affecting the north and west, with some heavy rain and strong winds followed by cooler, more showery interludes.

‘The driest and brightest weather is likely to be in the southeast where rain bands will often be weak. Temperatures generally around average thorough this period, although brief cold spells possible.’

Looking ahead to the period from November 18 to December 2, the Met Office says: ‘Through this period, there is an increased chance of wintry showers from the north and northwest, initially over higher ground but also a low risk at lower levels later in the month.

‘While there is little sign of prolonged, widespread settled weather, conditions are likely to be less stormy and windy. Where there are more settled spells, frost and fog are increasingly likely, with temperatures slightly colder than average. Overall remaining drier than average.’

BBC Weather’s forecast for this period said: ‘Moving into the second half of November, we should see an overall colder pattern begin to take shape.’ It added: ‘High pressure near Greenland will help direct colder air from the north towards the UK, leading to a period of below normal temperatures.

‘As the Greenland high becomes more entrenched and occasionally extend towards Northern Europe, winds are likely to diminish. With low pressure still expected to be close by, this doesn’t appear to be a dry pattern, but it is also unlikely to be an extremely wet pattern.’