Why are kids being hospitalized from COVID-19 at higher rates in the US than in England?
Advertisement

Children in the United States are much more likely to be hospitalized with COVID-19 than children in England.

American kids under age 18 are being newly admitted to hospitals with the virus at a rate up to four times higher than youngsters in England, according to a DailyMail.com analysis of publicly available data.

This is despite the UK experiencing another wave of infections and having one of the highest seven-day incidence rates of Covid in the world.

Health experts tell DailyMail.com that neither masks nor vaccination rates explain the disparity because face coverings are not required in any schools in England and the U.S. has higher rates of vaccinations among kids.

Instead, they point to more widespread testing in the UK, which has outpaced the U.S., and higher rates of chronic conditions such as obesity, which increases the risk of Covid-related hospitalization. 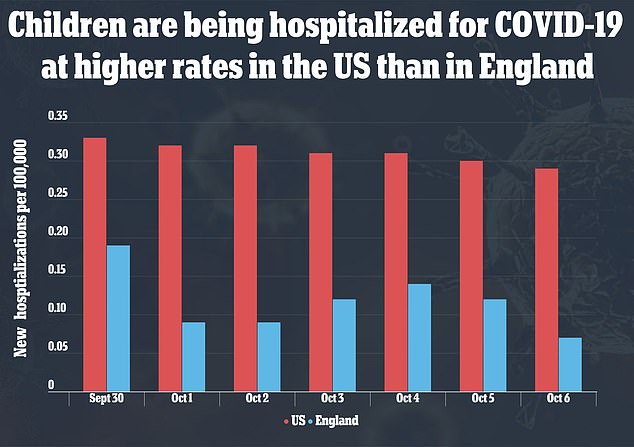 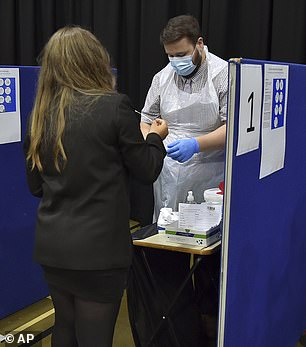 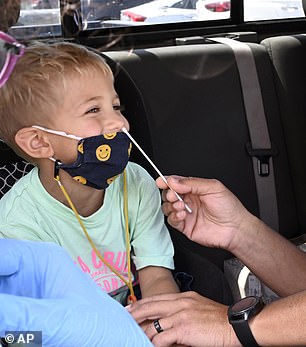 Doctors say frequent testing among England’s schoolchildren may be one of the factors behind the country’s lower pediatric hospitalization rates. All secondary school students in England (left), are tested at home twice a week, something not done in the U.S (right), likely resulting in more cases earlier, preventing hospitalization

For the analysis, DailyMail.com looked at numbers compiled by the U.S. Centers for Disease Control and Prevention (CDC) and National Health Services (NHS) England.

The biggest disparity was seen on October 6 with 4.14 times as many American kids per 100,000 admitted to hospitals compared to English kids.

So what’s behind this gap?

‘There are some things to think about,’ Dr Peter Chin-Hong, an infectious disease specialist who treats adults at the University of California, San Francisco, told DailyMail.com.

‘The UK doesn’t have mask mandates [for kids] and vaccines for adolescents have not been as available as they are in the U.S.’

In early September, millions of children returned to schools in England with face coverings not required in classrooms.

By comparison, in the U.S., the CDC recommends wearing masks indoors for everyone aged two and older, regardless of vaccination status.

Some states have adopted the CDC recommendation while others, such as Florida and Texas, have prohibited mask mandates in schools.

And while masks are a politically divisive issue in the U.S., members of both the Conservative and Labour Parties in the UK have stated that wearing masks prevent children from being able to communicate and socialize. 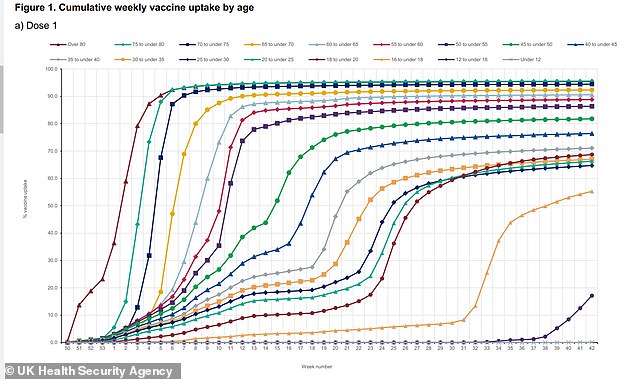 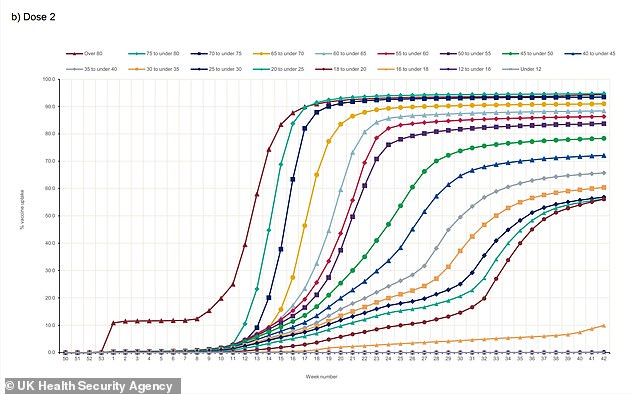 Vaccinations also doesn’t seem to be behind higher rates of hospitalization in the U.S.

Children between ages five and 11 were just authorized to receive vaccines on Tuesday so the impact of their vaccination rates won’t be seen for several weeks.

Meanwhile, in the UK, vaccines are only authorized for those aged 12 and older.

Of 12-to-15-year-olds, fewer than 20 percent have received at least one dose and fewer than one percent are fully vaccinated, according to the UK Health Security Agency, which replaced Public Health England.

Meanwhile, of 16-to-17-year-olds, about 55 percent have received at least an initial dose and 10 percent are fully vaccinated.

Dr James Versalovic, COVID-19 Command Co-Leader and Pathologist-in-Chief at Texas Children’s Hospital, in Houston, told DailyMail.com the vaccines also can’t be considered a factor because they are entirely different.

‘Not only are they different manufacturers but they’re different types of vaccines.

Pfizer’s vaccine uses messenger RNA, or mRNA, to teach human cells how to make a protein that will trigger an immune response (antibodies) inside our bodies.

Meanwhile, AstraZeneca’s immunization is known as a viral vector vaccine, which combines genetic material from the new virus with the genes of the adenovirus – a cause of the common cold – to induce an immune response. 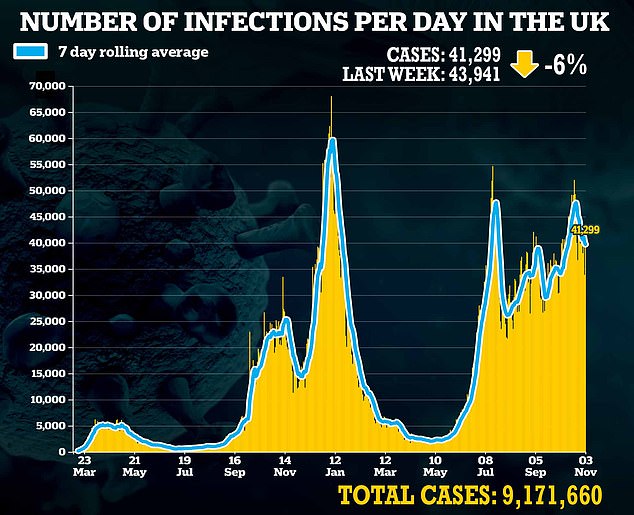 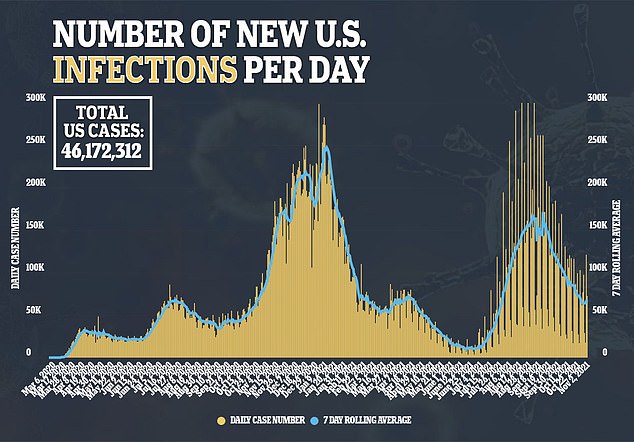 Experts say this means there are other factors driving up hospitalization rates in the U.S. including environmental differences.

They say that one of those factors is testing, which is much more widely used in the UK than in the U.S.

Currently the UK’s Department of Education requires all secondary school students, between ages 11 and 18, be tested at home twice a week using rapid lateral flow tests.

The rapid test looks for antigens, proteins found on the surface of the virus, rather than genetic material, and returns results within minutes.

‘The testing strategy in the UK has not been adopted in the U.S.,’ said Chin-Hong.

‘If you can test lots of kids who are readily available, you can pick out those with a very high viral load who can transmit the virus more easily and keep them home.’

But he says that because there is no regular testing at many U.S. schools, kids are being sent to classrooms instead of being kept at home because tests aren’t detecting these cases.

This can lead to these children being hospitalized themselves or infecting other children who end up hospitalized.

‘The reality is, if you’re testing so many kids that frequently – that we’re not doing in the U.S. – you’re expanding the denominator and detecting a number of kids including asymptomatic and mild cases,’ said Versalovic.

‘This makes the hospitalization rate look smaller because the denominator is larger.’ 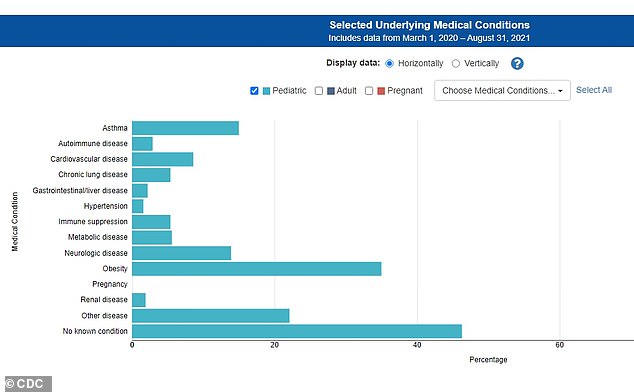 ‘Hospitalization is not the same as infection,’ Chin-Hong added.

‘Kids that don’t have well-controlled disease are going to end up hospitalized.’

For example, according to the NHS, 9.9 percent of four-to-five-year-olds are obese in England.

Comparatively, 13.4 percent among two-to-five-year-olds in the U.S. are obese. CDC data find.

Among pre-teens, the gap is much closer with 21 percent obese in the UK compared  to 21.9 percent in the U.S.

‘There were comments [at the CDC advisory committee meeting] that so many of the children being hospitalized [with Covid] today are…chubby.’ 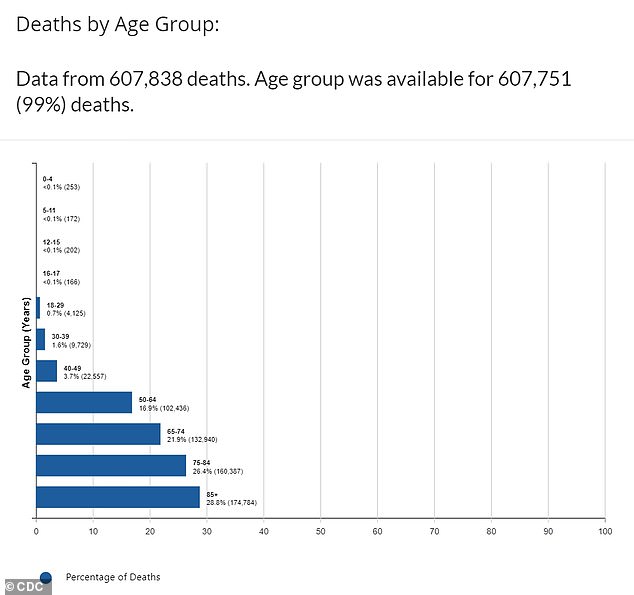 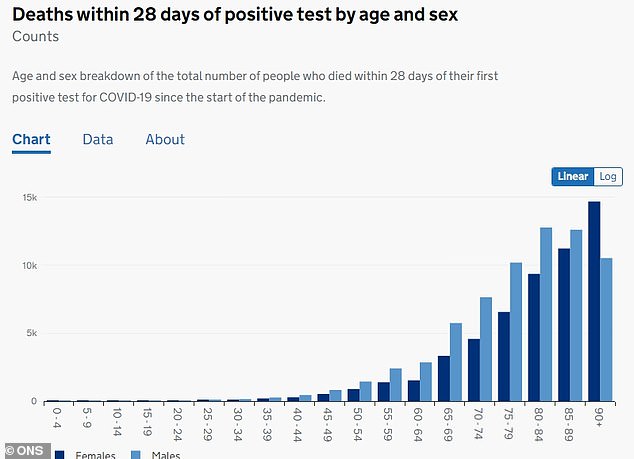 In fact, according to the CDC, more than one-third – 35 percent – of all U.S. children who have been hospitalized since the pandemic began have been obese.

‘It won’t influence the spread of the virus but should a chubby child get infected higher chance they will become more seriously ill and get hospitalized,’ Schaffner said.

This also leads to higher risk of death.

Since the pandemic began, American children have been dying at a higher rate than English children.

Experts encourage parents to vaccinate their kids – and stress that the more adults get vaccinated and drive down COVID-19 transmission, the more pediatric hospitalizations will fall.

‘The proportion of any adults in the community who get vaccinated needs to go up and up and we need to continue to use masks and social distancing and other ancillary means wherever kids congregate,’ said Schaffner.

Chin-Hong added: ‘You have to control the amount of virus in the community.

‘If you have these measures that bring transmission down low, that affects kids who live in the community.’

ROBERT HARDMAN:  Cop26’s Stella attraction? The Prince who started it all