‘I kind of see it as a red flag!’ Woman reveals her date tried to call her a ‘c**t’ behind her back – but accidentally sent HER the lewd text while she was parking her car

By Erica Tempesta For Dailymail.com

A woman has revealed that her first date tried to call her a ‘c**t’ behind her back — but accidentally sent the crude text to her instead of his friend.

TikTok user Molly Hair posted a screenshot of the conversation in her viral video, which was ironically set to an audio clip Ava Watson’s song ‘I Found a Guy Told Me I Was a Star.’

‘Chivalry is alive #firstdatefail,’ Molly captioned the clip, which has been viewed more than 4.5 million times since it was posted over the weekend. 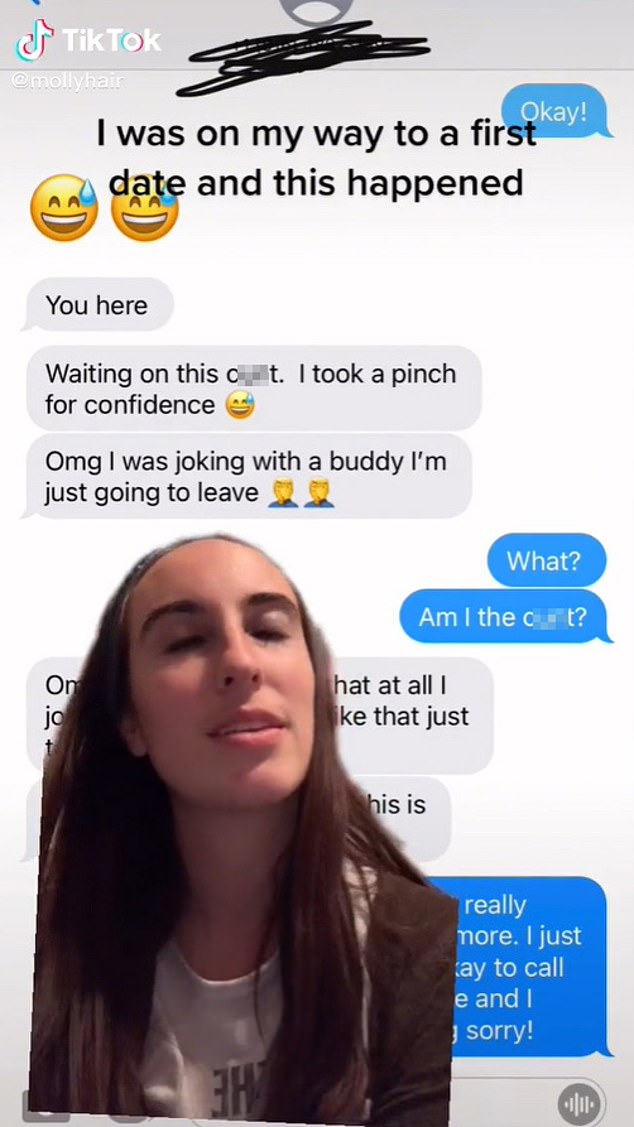 Big mistake! TikTok user Molly Hair has revealed her first date tried calling her a ‘c**t’ behind her back, but accidentally sent her the lewd text message

The mystery man was waiting for her to arrive for their first meetup when he texted his friend: ‘Waiting on this c**t. I took a pinch for confidence.’

He caught his mistake before Molly did and immediately apologized, writing: ‘Omg I was joking with a buddy I’m just going to leave.’ He added two face-palm emojis for good measure.

‘What? Am I the c**t?’ Molly asked when she realized what had happened.

Her date tried to backtrack, claiming it was just a ‘joke.’

‘Omg I don’t really think that at all I joke too much I say s**t like that just to say it,’ he insisted. ‘I completely understand if this is over.’

Molly agreed that their relationship was over before it had even started. 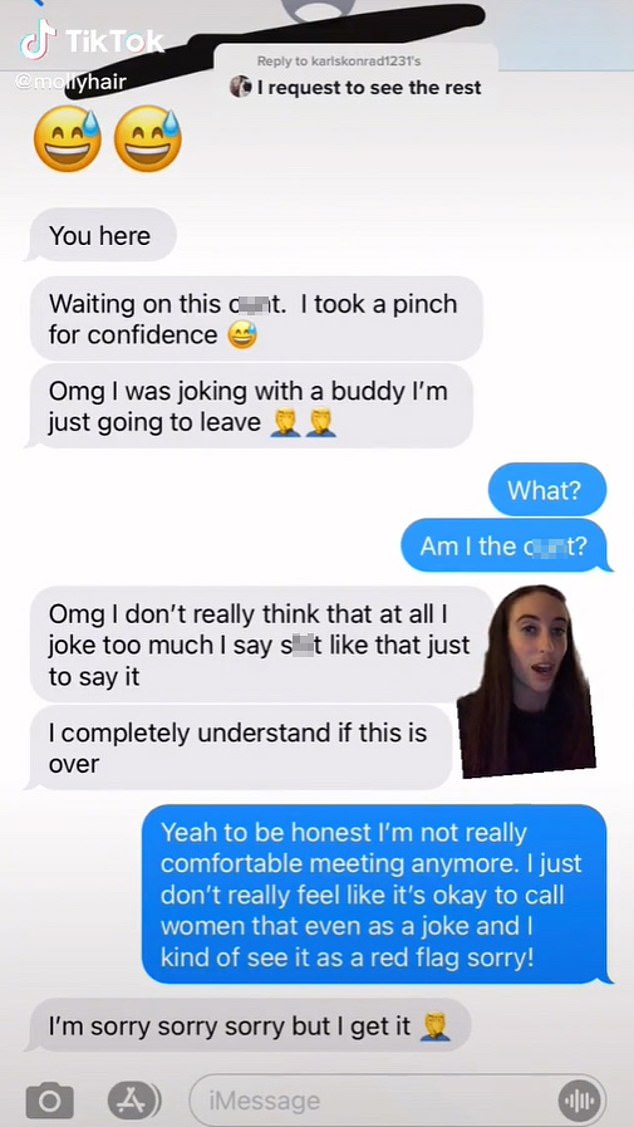 Awkward: The mystery man was waiting for her to arrive for their first meetup when he texted: ‘Waiting on this c**t.’ He caught his mistake before Molly did and immediately apologized

‘Yeah to be honest I’m not really comfortable meeting anymore,’ she replied. ‘I just don’t really feel like it’s okay to call women that even as a joke and I kind of see it as a red flag sorry! I’m sorry sorry sorry but I get it.’

Molly posted the conversation using the app’s green-screen effect, and a number of commenters were desperate for her to get her head out of the way so they could read the rest of the texts.

‘Hi Molly, you seem really nice! I don’t [mean] to be rude here but can you PLEASE move your head?!?’ someone else asked. ‘Thank you!!!’

In her follow-up video featuring the full screenshot, Molly admitted that she didn’t expect the post to ‘blow up the way that it did.’ 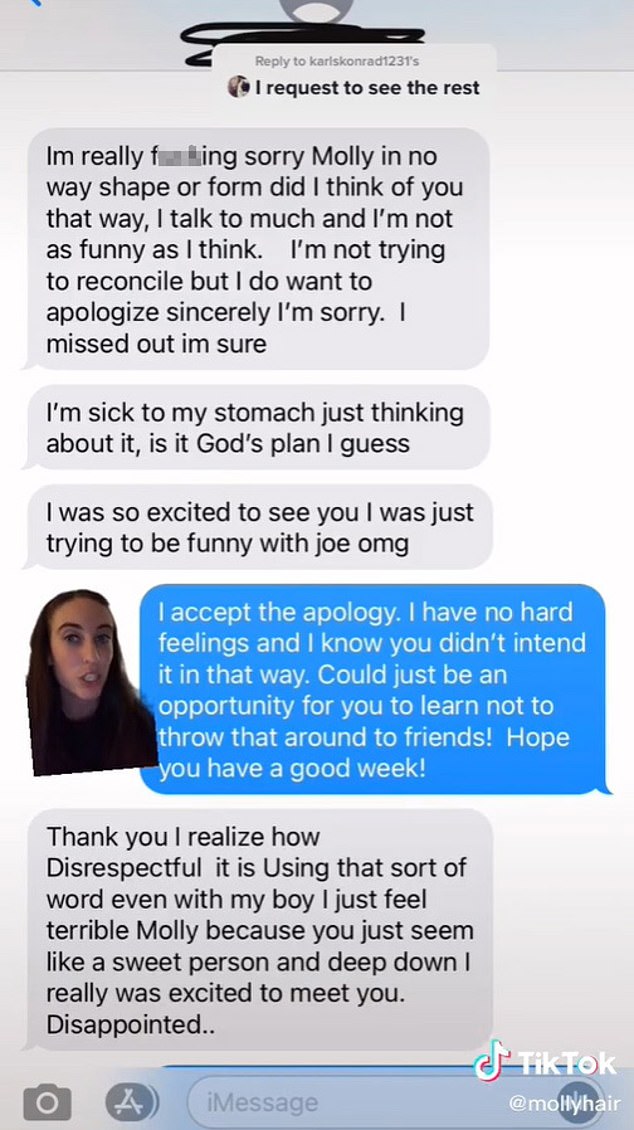 Called out: Molly also shared screenshots of his follow-up texts in which he begged her to give him another chance 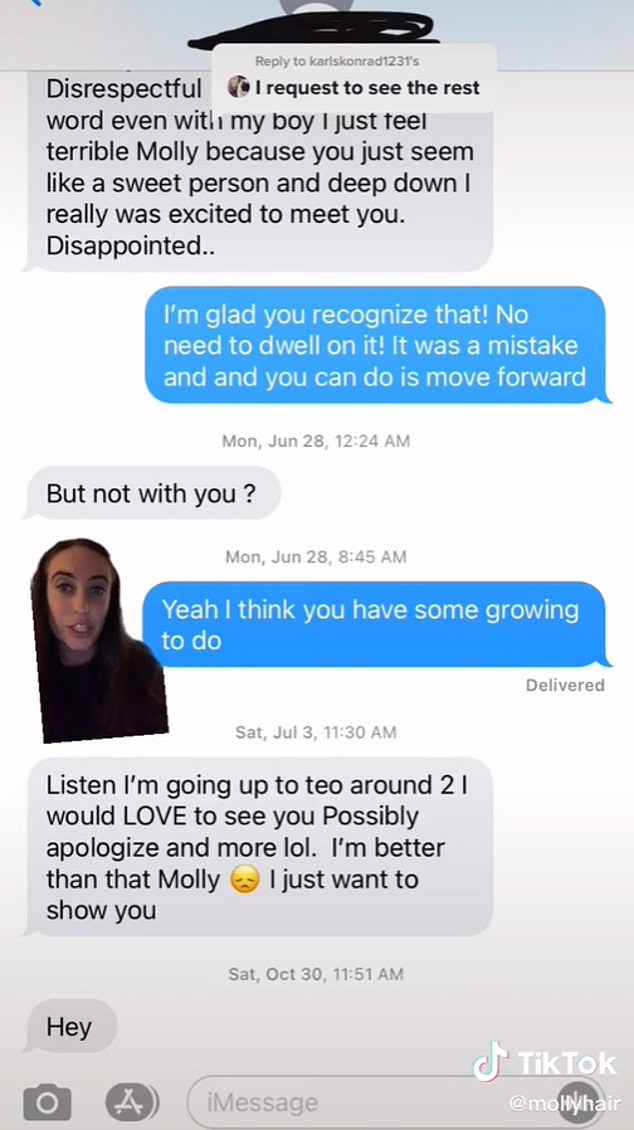 Moving on: The man continued to apologize and tried to get Molly to change her mind, but she thought his derogatory language and persistence were both red flags

‘So this is before a first date,’ she explained. ‘I was parking. I was getting ready to go in when I got those first messages. At first, I was confused and I didn’t really understand what he was saying, and when I realized what was going on, I immediately started driving away.’

Molly said the guy tried calling her, which is when she sent him a text telling him she wasn’t going to meet him on their date.

‘So he did continue to try to reach out to me. I was probably way too nice in rejecting him,’ she admitted. ‘The social worker in me just wants to help people to learn and grow from their mistakes. I probably should have just ignored him.’

Molly also shared screenshots of his follow-up texts in which he begged her to give him another chance.

‘I did finally just start ignoring him when he wasn’t getting that message,’ she said. ‘I see that persistence as also a red flag.’

How Geoffrey Cox lined his pockets as he ‘moonlighted’ for 10,700 hours on his ‘second job’