Current and former employees of a Pennsylvania school district have claimed in a lawsuit that officials knew for years that unsafe levels of lead and asbestos posed potential health risks for students and staff but never disclosed the information to them or the public.

The plaintiffs are asking for a medical monitoring program for current and former Scranton school district students and staffers, as well as undisclosed damages. They are also seeking class-action status.

The lead plaintiffs are an elementary school principal, a reading specialist and a retired maintenance worker. In the suit, they allege the district received test results from environmental studies, starting in at least 2016, that made officials aware of the issues, but they never informed students, parents, and staffers until last month.

A message seeking comment was left with the superintendent’s office.

The plaintiffs claim the defendants knew or should have known that all but four of the district’s 18 school buildings posed serious health dangers, and yet failed to take protective measures for reasons known only to them.

Patrick Howard, an attorney with Saltz, Mongeluzzi, Barrett & Bendesky law firm, which filed the suit, noted that health problems related to lead and asbestos exposure can take years, if not decades, to develop and become apparent.

“I’ve advised my clients to get chest x-rays, CTC scans if they’re concerned,” Howard said. “This could be something they want to do for years to come. They shouldn’t have to reach into their pocket for dollar one to pay for health care costs related to this. Some students may not have insurance, and through no fault of their own they may need to have medical oversight and treatment.”

School districts statewide have been grappling with how to address environmental hazards in aging school buildings. Asbestos is a known carcinogen, while lead can cause lifelong brain damage and other injuries, especially in children.

Coronavirus Epidemic Could Infect Two-Thirds of World’s Population: WHO Scientist

Coronavirus Epidemic Could Infect Two-Thirds of World’s Population: WHO Scientist 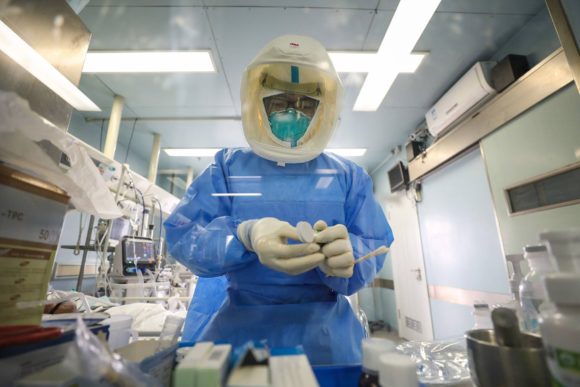 As the number of coronavirus cases jumps dramatically in China, a top infectious-disease scientist warns that things could get far worse: Two-thirds of the world’s population could catch it.

So says Ira Longini, an adviser to the World Health Organization who tracked studies of the virus’s transmissibility in China. His estimate implies that there could eventually be billions more infections than the current official tally of about 60,000.

If the virus spreads to anywhere near that extent, it will show the limitations of China’s strict containment measures, including quarantining areas inhabited by tens of millions of people. WHO Director-General Tedros Adhanom Ghebreyesus has credited those steps with giving the rest of China and the world a “window” in which to prepare.

Quarantines may slow the spread, but the virus had the opportunity to roam in China and beyond before they went into effect, Longini said. The country boosted its count of those infected by almost 15,000 on Thursday after widening the diagnosis methods.

Longini’s modeling is based on data showing that each infected person normally transmits the disease to two to three other people. A lack of rapid tests and the relative mildness of the infection in some people also makes it difficult to track its spread, he said.

Even if there were a way to reduce transmission by half, that would still imply that roughly one-third of the world would become infected, Longini said.

“Unless the transmissibility changes, surveillance and containment can only work so well,” Longini, co-director of the Center for Statistics and Quantitative Infectious Diseases at the University of Florida, said in an interview at WHO headquarters in Geneva. “Isolating cases and quarantining contacts is not going to stop this virus.”

He’s not alone in warning of the possibility of a far greater spread. Neil Ferguson, a researcher at Imperial College London, estimated that as many as 50,000 people may be infected each day in China. Gabriel Leung, a public health professor at the University of Hong Kong, has also said close to two-thirds of the world could catch the virus if it is left unchecked.

The estimates of spread are part of a spectrum of possibilities that could unfold as the epidemic progresses, said Alessandro Vespignani, a biostatistician at Northeastern University in Boston. The next few weeks may provide more information about how easily the disease spreads outside China, particularly if more measures are put in place to control it, he said.

“People change behaviors” in response to disease, he said. “This is kind of a worst-case scenario. It’s one of the possibilities.”

More data need to be gathered to gain a better idea of how far the virus is likely to range, said David Heymann, an infectious disease expert at the London School of Hygiene & Tropical Medicine who oversaw the WHO’s response to SARS in 2003. “We’re seeing countries outside of China that have been able to contain the outbreak pretty well.”

“I’m not saying they’re wrong,” he said of estimates from the likes of Longini and Leung. “I’m saying the models will be refined as more information comes to light.”

Photograph: A medical staff member works in the negative-pressure isolation ward in Jinyintan Hospital, designated for critical COVID-19 patients, in Wuhan, China, on Thursday, Feb. 13, 2020. The city reported 13,436 new cases of COVID-19 on Feb. 12, a big jump after the city combed communities for patients and expanded the capacity to take them in. Photo credit: Feature China/Barcroft Media via Getty Images. 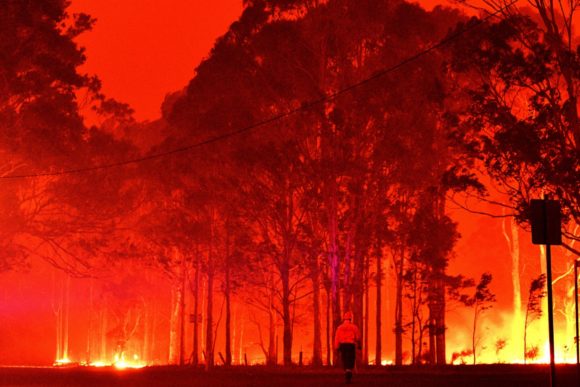 Australia’s central bank chief Philip Lowe warned of wide-ranging economic and financial impacts from climate change, after his drought-stricken nation suffered some of its worst wildfires ever.

Speaking on a panel with his Canadian counterpart, Lowe pointed out that drought would cut Australia’s GDP growth by a quarter percentage point this year, and the blazes would shave 0.2 percentage point from growth in the final three months of 2019 and the current quarter.

“The economic implications are profound,” the Reserve Bank governor told the Australia-Canada Economic Leadership Forum Thursday in Melbourne. “The world is getting hotter and the climate’s more variable, and we’re seeing already in Australia, perhaps more than anywhere else in the world, the effects of that.”

Australia is the world’s driest-inhabited continent and experiences wildfires to some extent every year, but the scale of the crisis this season has been extraordinary. More than 30 people died as flames scorched an area the size of England.

Lowe said the RBA is trying to understand “the full dimensionality” of the economic effects of climate change and how it could flow through to the bank’s financial stability mandate.

Lowe expects better guidance with energy policy would assist businesses’ investment decisions. “There’s been very substantial investment in renewables in Australia,” he said. “We have fantastic opportunities there to reshape our energy production system. Investment is taking place, but it would be enhanced by greater policy certainty.”

The RBA chief also blamed subdued private sector investment on excessive risk-return expectations that corporate Australia has been reluctant to adjust despite the new world of lower interest rates.

Meanwhile, the governor listed the search for higher yield in the low-rate environment and elevated household debt as additional financial stability vulnerabilities.

Lowe attributed the “structurally high” levels of debt to the relative ease of accessing credit and Australians’ preference toward living in detached housing in major cities.

“We’re conscious in our interest rate decisions that when we cut interest rates from cyclical perspectives it encourages people to borrow even more from an already high level of debt because of these structural reasons,” he said. “It’s a consideration in our decisions at the moment.”

The RBA has kept the cash rate unchanged at its past three meetings, including last week when the central bank said the risks of lowering rates outweigh the benefits.

–With assistance from Matthew Burgess.

Photograph: A firefighter walks past burning trees during a battle against bushfires around the town of Nowra in the Australian state of New South Wales on Dec. 31, 2019. Thousands of holidaymakers and locals were forced to flee to beaches in fire-ravaged southeast, as blazes ripped through popular tourist areas leaving no escape by land. Photo by SAEED KHAN/AFP via Getty Images.

The House Judiciary Committee advanced the measure on a 17-1 vote. The bill moves to the full House next, and one of its lead sponsors, Rep. Jason Nemes, predicted it will pass by a wide margin. It would still have to pass the Senate, where its prospects are more uncertain.

The committee room was filled with advocates who have pressed for years to legalize medical marijuana for people battling chronic pain and debilitating medical conditions.

One Kentucky advocate, Eric Crawford, told lawmakers he already uses medical marijuana as an alternative to opioids to deal with pain and muscle spasms. Crawford suffered spinal cord injuries in a vehicle crash more than two decades ago.

“I’m not the only sick person in Kentucky in this predicament,” he said in emotional testimony. “There are thousands of other sick people in our state that use cannabis medically and are considered lawbreakers. Do you think we’re all criminals?”

He urged lawmakers to “do the right thing” and legalize what they consider a form of medicine.

“It is your moral duty to help those less fortunate than you,” Crawford said. “It is your job to enact laws for the betterment of sick Kentuckians.”

Some committee members pointed to overwhelming support from constituents back home to legalize medical marijuana as they voted for the bill. Advocates say medical marijuana would lessen dependence on pain medications in a state haunted by opioid addiction.

Smoking medical cannabis would not be permitted under the bill. Consumption could take place through such forms as pills and oils. A regulatory board would determine what conditions would qualify for doctors to prescribe marijuana to patients. The board would consist of eight doctors, four public advocates and a pharmacist.

Republican Rep. Kim Moser, who voted against the bill, said more research is needed on the health benefits of medical marijuana.

Kent Ostrander of The Family Foundation told the committee that the state shouldn’t rely on “anecdotal-based assumptions” about medical marijuana.

After the lopsided committee vote for the bill, Crawford – who has been a frequent visitor to the state Capitol to promote the cause – acknowledged it was only an initial victory.

The legislation is House Bill 136.