Archaeologists uncover 1,800-year-old 'social' toilets that could be used by 13 actors at once
Advertisement

An ancient latrine unearthed in western Turkey WHEN? would have let more than a dozen people to drop trou and ‘socialize’ and they did their business.

The remains of the convivial commode were discovered in the ruins of a 2,000-year-old theater in the ancient city of Smyrna, now located inside Izmir, Turkey’s third most populous city.

‘It is a toilet with a U-shaped seating arrangement… that 12-13 people can use together,’ Akin Ersoy, an archaeologist at Izmir’s Katip Çelebi University and leader of the excavation, said in a statement.

‘The use of this toilet space by a large number of people also brought socialization.’

Such social bathroom arrangements were fairly common in ancient Anatolia, which overlaps with much of modern day Turkey, but this is the first seemingly reserved for performers in a theater.

‘Since it is located in a closed area, it is possible to consider it an ‘artist toilet,’ he added, calling the find ‘a first among theaters in the Mediterranean region.’ 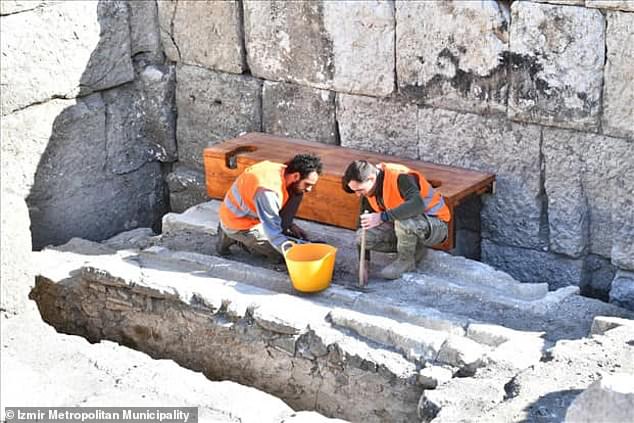 A 1,600-year-old latrine was uncovered in the ruins of an ancient Roman theater in west Turkey.  Because the building would have been closed off to the public, archaeologists believe the toilet was reserved for actors. The performers would have sat on a U-shaped bench that could accommodate up to 13-people at once

‘There are latrines that serve the audience near the theaters we know, but it is a first for such a place to be used as a toilet in the stage building of the theater,’ Ersoy said.

When nature called, the performers would have sat on a wooden U-shaped bench, which only rose about 16 inches off the ground and had holes spaced out about two feet apart, Daily Sabah reported, allowing them to sit side-by-side.

In front of the seating is a four-inch trough that would have had clean water flowing through it.

If you were using the latrine you would then dip a sponge on a stick into the trough to clean your backside. 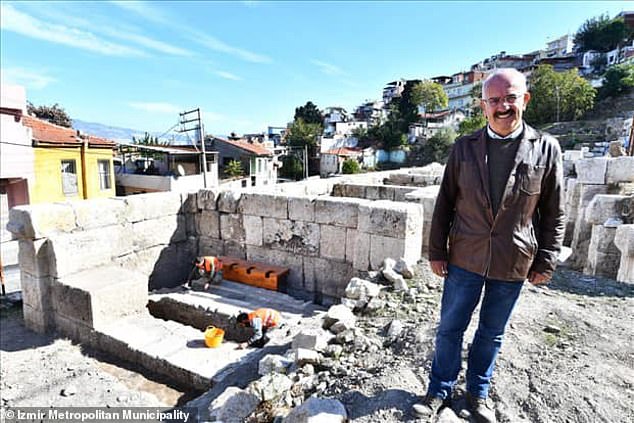 ‘Since it is located in a closed area, it is possible to consider it an ‘artist toilet,’ said archaeologist Akin Ersoy (pictured) , who called the find ‘a first among theaters in the Mediterranean region’

The archaeologists constructed a replica of the wooden bench to confirm their theory about the structure’s use.

The theater, which had a 20,000-spectator capacity, was built in the 2nd century B.C., when Smyrna and Anatolia would have been under Roman authority.

The latrines, though, were added during a major renovation about 400 years later.

Both were in use until about the 5th century A.D., when the Roman empire evolved in the east into the Christianized Byzantine Empire. 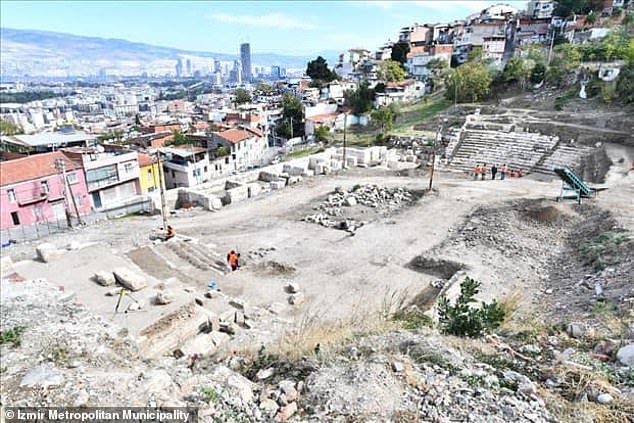 The 20,000-seat theater was built in the ancient city of Smyrna in the 2nd century BC 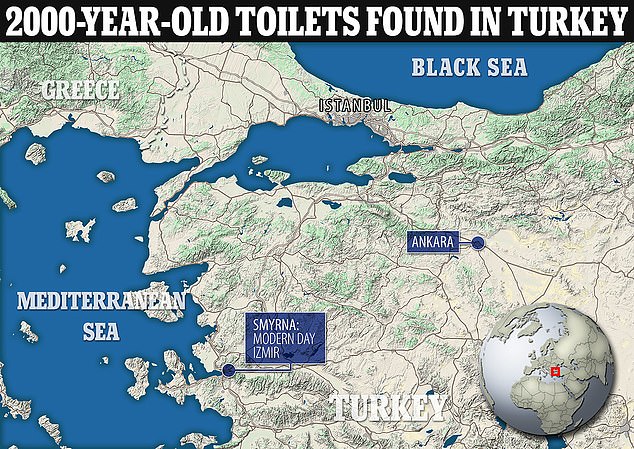 The theater and latrine were unearthed at the site of the ancient city of Smyrna in modern-day Izmir, Turkey

Founded more than 2,400 years ago, Smyrna has been the site of numerous archaeological discoveries in recent years.

Ersoy’s team has been excavating the site for five years with support from the Izmir Metropolitan Municipality. 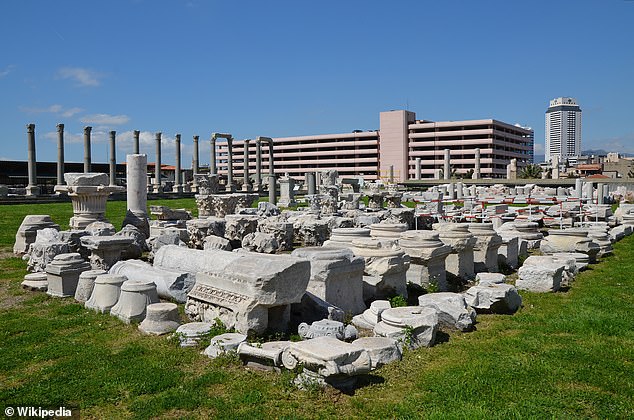 Founded more than 2,400 years ago, Smyrna has been the site of numerous archaeological discoveries. Pictured: Ruins of the agora of Smyrna, built during the Hellenistic era and totally rebuilt after an earthquake in 178 AD by Marcus Aurelius

In March, they reported finding a stone quarry used in the Hellenistic and Roman periods, according to the Municipality.

Block stones and columns were transported to Smyrna from the ancient quarry, named Tırazlı-Kesikkaya, Ersoy said.

The roughly processed blocks were launched by sleds on stream beds and transported by sea to the Smyrna’s port, Ersoy said, at great cost and with great difficulty.