What to expect this November

How to Save £5 on ANYTHING at Currys PC World

Scientists have found evidence suggesting the first visitors to the Azores were Norse sailors arriving 700 years before the Portuguese, who supposedly discovered the string of North Atlantic volcanic islands in the 15th century.

Analyzing sediment layers in various lakes in the archipelago, an international team found traces of fecal compounds from non-native ruminants like cows or sheep that dated back to between 700 and 850 A.D.

They also found an increase in charcoal particles, likely indicating explorers or colonists were setting large fires, and a drop in native tree pollen, suggesting someone had burned down parts of the forest to provide grazing land for cattle.

The new research counters the long-held belief that 15th century Portuguese sailors were the first humans to arrive in the Azores, 900 miles from the coast of Portugal.

‘Even with abundant available historical information allowing us to have a very accurate picture of the past, it is necessary to foster interdisciplinary research among the humanities and natural sciences to fully understand our history,’ co-author Santiago Giralt, a paleoclimatologist at Geosciences Barcelona, said in a statement. 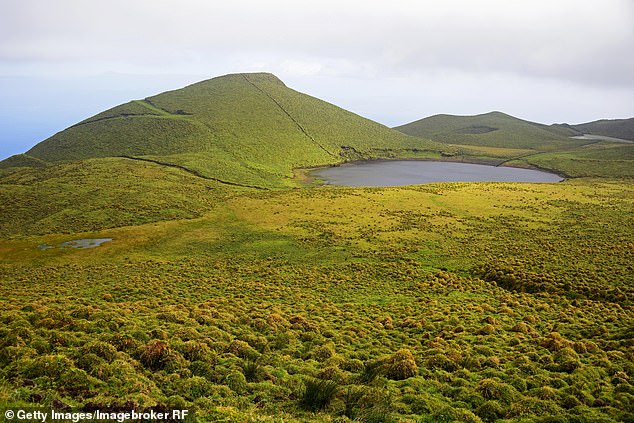 Analysis of sediment cores taken from Pico Island’s Lake Peixinho (pictured) showed an increase in 5-beta-stigmasterol, a compound usually found in livestock waste, dating to between 700 and 850 AD, well before the Portuguese arrived in 1427

Now an exotic vacation destination, the Azores first started appearing in European maps in the 1350s.

The first archaeological evidence of humans on the islands, though, dates to 1427 when Portuguese sailor Diogo de Silves landed on Santa Maria Island while searching for new routes to Asia under orders from Prince Henry the Navigator.

The natural record tells a different story, however: sediment samples are valuable tools in peeling back layers of history because material that sinks to the bottom of a lake is often preserved as new strata of sediment is layered on top. 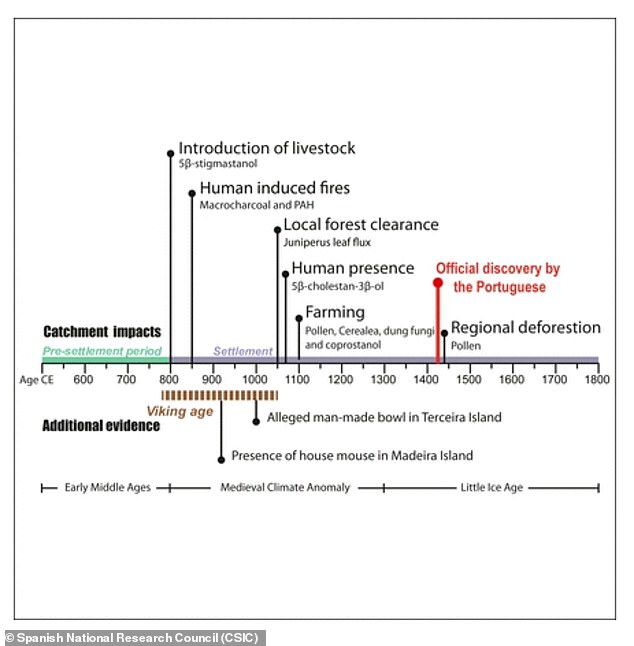 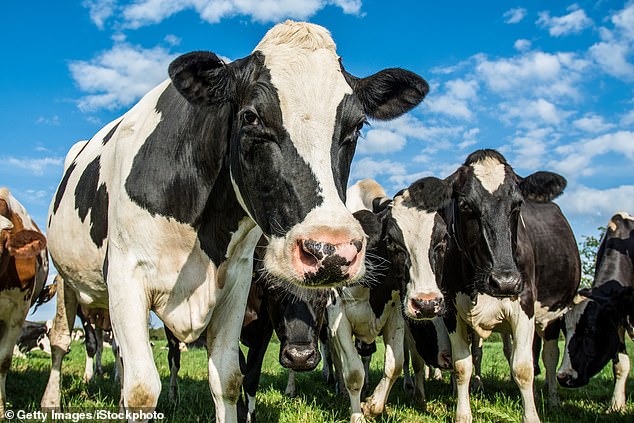 Because the Azores are isolated in the Atlantic, large mammals didn’t live on the Azores prior to the arrival of humans.  So the stigmastanol found in the 8th-century sediment layer on Pico Island can be attributed to cows, sheep, or other ruminants brought ashore by seafarers

The research has been published in the scientific journal Proceedings of the National Academy of Sciences.

Analysis of sediment cores taken from Peixinho Lake in the Azore’s Pico Island showed an increase in 5-beta-stigmasterol, a compound usually found in the waste of livestock, dating to between 700 and 850 A.D.

‘Fecal sterols and stanols are produced in great abundance in the intestinal tracks of mammals and are well-preserved in lake sediments, co-author Timothy Shanahang of the University of Texas said in the release, ‘providing a unique and unambiguous tracer of the presence of large mammals during past time intervals.’

But large mammals didn’t live on the Azores prior to the arrival of humans, ‘due to its geographical location, in the middle of the Atlantic Ocean,’ said Giralt. 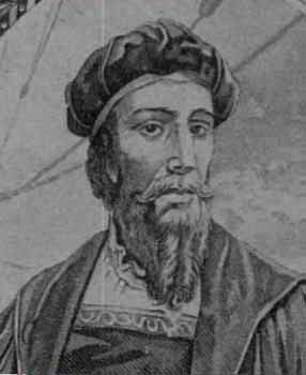 Samples taken from Caldeirão Lake on Corvo Island bore similar results, though those sterols dated to about a century later than the ones on Pico Island.

The study also determined sediment from a lake on another island showed evidence of non-native ryegrass.

‘As we demonstrate in this work, early human settlement on the islands led to a profound environmental and ecological disturbance,’ lead author Pedro Raposeiro of the University of the Azores said in the release.

Raposeiro said their study, supported by the Spanish National Research Council, ‘highlights the challenge in relying on the historical record to identify relative states of ecosystems or landscape disturbances.’ 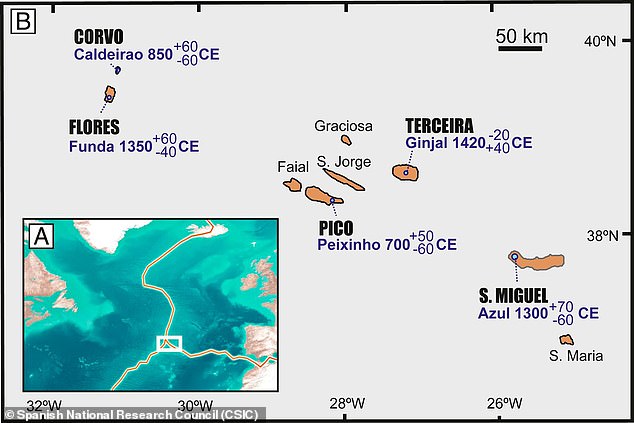 Based on simulations of climate conditions during that time frame, Giralt’s team believes these early visitors were Norse seamen taking advantage of abnormally robust northerly winds and weaker westerly winds to sail from northern Europe.

‘Because of the Earth’s rotation, westerly winds are dominant in the Atlantic, Giralt said in a statement. 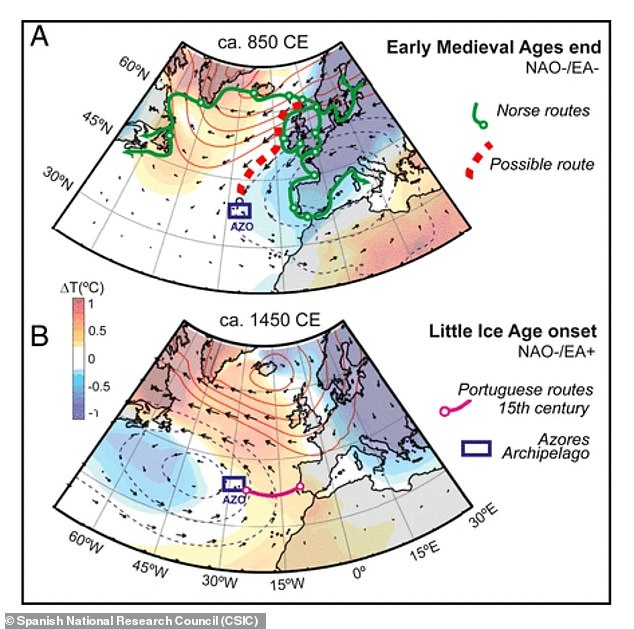 Climate conditions during that time frame suggest Norse seamen could have taken advantage of abnormally robust northerly winds and weaker westerly winds to sail from northern Europe to the Azores in the 8th century.

The latest research follows a 2015 study out of Cornell University that found genetic similarities between Azorean mice and rodents from northern Europe.

Previously, Portuguese archaeologist Nuno Ribeiro has claimed that alleged rock art and a small number of underground structures on the islands put human arrival at more than 2,000 years ago.

But other researchers have been unable to confirm these structures are manmade or that they predate De Silves’ arrival in the 15th century.