More than 10% of pregnant women infected with HIV use marijuana - up from 7% in 2007, study finds

Here’s how NASA says you should watch the Geminids

A new species of dinosaur that was four times the size of a king size bed roamed the Isle of Wight 125 million years ago, fossil analysis has revealed.

Brighstoneus simmondsi is the latest in a host of new dinosaur discoveries described by scientists at the Natural History Museum in recent weeks.

It follows the announcement of a new species of ankylosaur, therapod and two new spinosaur dinosaurs.

The latest discovery is an iguanodontian, a group that also includes the Iguanodon and Mantellisaurus.

A new species of dinosaur that was four times the size of a king size bed roamed the Isle of Wight 125 million years ago, fossil analysis has revealed. Brighstoneus simmondsi is pictured

The new dinosaur is an iguanodontian, a group that also includes the Iguanodon and Mantellisaurus (pictured) 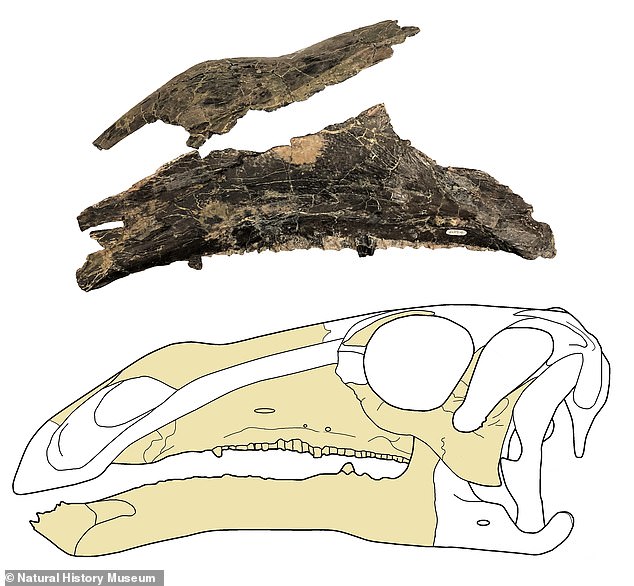 Brighstoneus simmondsi was found to have 28 teeth (pictured). It also had a bulbous nose, whereas the Iguanodon and Mantellisaurus have very straight noses

When did it exist?

Where did it live?

How long was it?

How much did it weigh?

How many teeth did it have?

When was the fossil found?

How was it given its name?

Brighstoneus after the village of Brighstone, near to the excavation site where the fossil was found, and Keith Simmonds, who discovered the specimen.

Until now, iguanodontian material found on the Isle of Wight has usually been linked to one of these two dinosaurs, but when a University of Portsmouth PhD student examined a fossil specimen found 43 years ago he came across several unique traits distinguishing it from either the Iguanodon and Mantellisaurus.

‘For me, the number of teeth was a sign,’ said Dr Jeremy Lockwood.

‘Mantellisaurus has 23 or 24, but this has 28. It also had a bulbous nose, whereas the other species have very straight noses.

‘Altogether, these and other small differences made it very obviously a new species.’

It has been named Brighstoneus simmondsi after the village of Brighstone, near to the excavation site where the fossil was found, and Keith Simmonds, who made the discovery of the specimen in 1978.

Experts say the discovery of the new species suggests there were far more iguanodontian dinosaurs in the UK in the Early Cretaceous period than previously thought.

They added that assigning specimens from this period to either Iguanodon or Mantellisaurus must now change.

‘We’re looking at six, maybe seven million years of deposits, and I think the genus lengths have been overestimated in the past,’ said Dr Lockwood.

‘If that’s the case on the island, we could be seeing many more new species.

‘It seems so unlikely to just have two animals being exactly the same for millions of years without change.’

Dr Susannah Maidment, a co-author of the paper and Natural History Museum scientist, said: ‘The describing of this new species shows that there is clearly a greater diversity of iguanodontian dinosaurs in the Early Cretaceous of the UK than previously realised.

‘It’s also showing that the century-old paradigm that gracile iguanodontian bones found on the island belong to Mantellisaurus and large elements belong to Iguanodon can no longer be substantiated.’

The Isle of Wight has long been associated with dinosaur discovery, and even yielded the crucial specimens that led Sir Richard Owen to coin the term Dinosauria. 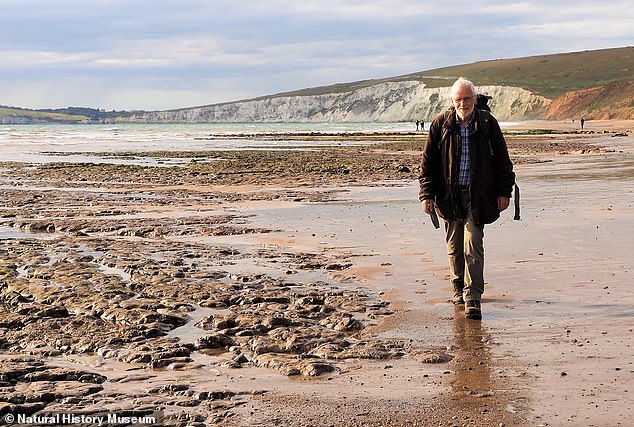 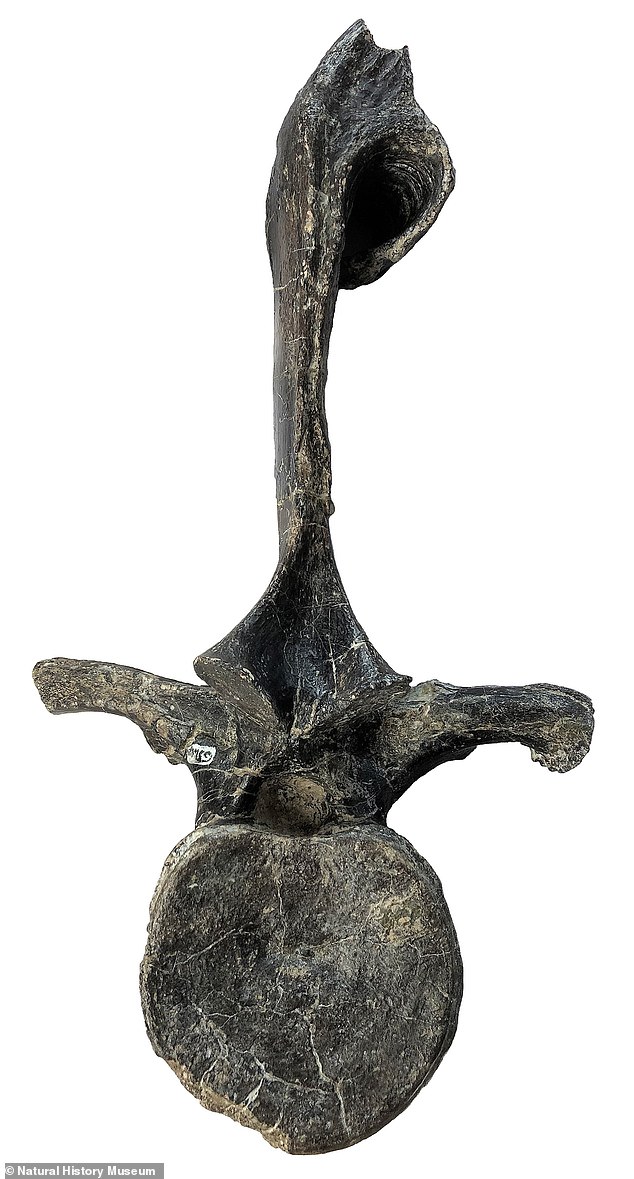 Experts say the discovery of the species suggests there were more iguanodontian dinosaurs in the UK in the Early Cretaceous period than previously thought. Its jaw is pictured

The authors conclude that the describing of Brighstoneus simmondsi as a new species calls for a reassessment of Isle of Wight dinosaur fossils.

‘British dinosaurs are certainly not something that’s done and dusted at all,’ said Dr Lockwood.

‘I think we could be on to a bit of a renaissance.’

In September, a 29ft long dinosaur was one of two new, previously undescribed dinosaur species found to have existed on the Isle of Wight.

The remains of the carnivorous reptiles, about the same length as a Stegosaurus but with crocodile-like skulls, were found on the beach near Brighstone on the island.

The more ferocious of the two was named Ceratosuchops inferodios, which translates as the ‘horned crocodile-faced hell heron’, due to a series of low horns and bumps across the brow region and its ‘heron-like’ hunting style.

Herons famously catch aquatic prey around the margins of waterways, but their diet is far more flexible than is generally appreciated, and can include terrestrial prey too.

The second was named Riparovenator milnerae, which translates as ‘Milner’s riverbank hunter’, after British palaeontologist Angela Milner, who died recently. 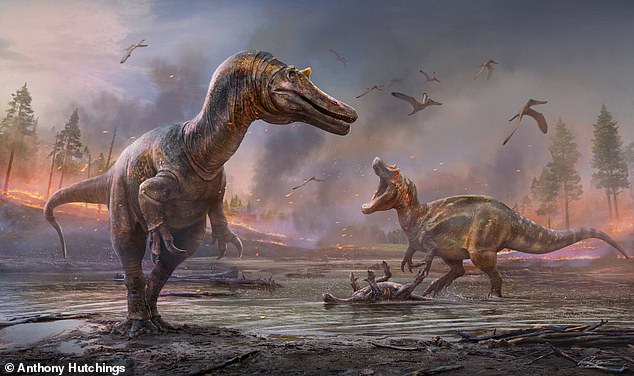 In September, a 29ft long dinosaur was one of two new, previously undescribed dinosaur species found to have existed on the Isle of Wight (pictured) 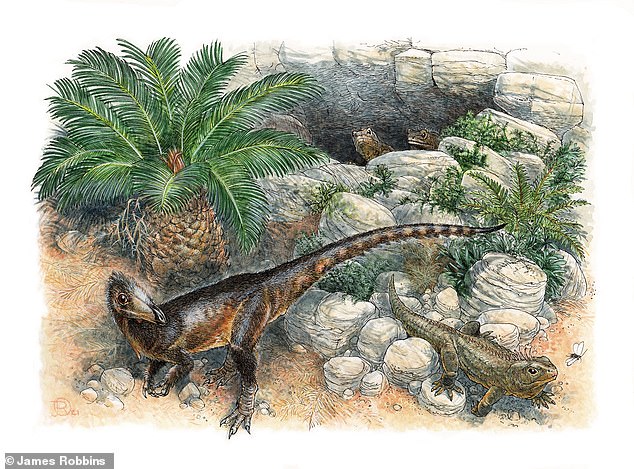 A new study also suggested that one of T.Rex’s ancient ancestors may not have been quite so scary, and was actually just the size of a chicken (artist’s impression pictured)

The same month as that discovery researchers from the Natural History Museum revealed that a bizarre armoured spike fossil, found in Morocco, belonged to a new species of dinosaur that was ‘unlike anything else in the animal kingdom’.

The fossil showed a series of spikes that were fused to the rib of the beast, which is unusual for an ankylosaur, as it would usually be connected to the skin tissue.

Ankylosaurs were a diverse group of armoured dinosaurs related to the stegosaurs, which were present throughout the Cretaceous period from 145 to 66 million years ago.

Last month, a new study also suggested that one of T.Rex’s ancient ancestors may not have been quite so scary, and was actually just the size of a chicken.

Researchers from the Natural History Museum and the University of Birmingham discovered the remains of the creature in a quarry in Pant-y-ffynnon in southern Wales.

The dinosaur, dubbed Pendraig milnerae, was a theropod — a group which also includes T.Rex — and lived between 200 and 215 million years ago.

The new discovery on the Isle of Wight has been published in the Journal of Systematic Palaeontology.

WHAT IS AN IGUANODON DINOSAUR?

Iguanodon is a genus of herbivorous dinosaurs which could grow to the size of an African elephant and run at 14mph (23kmh).

They walked the earth around 132 million years ago, during the Lower Cretaceous period.

Different species flourished in both Europe and North America.

They would have been prey for one of England’s biggest predators, Baryonyx, a relative of Spinosaurus.

These large dinosaurs were able to walk on both two legs or all four.

They had a highly specialised, five-fingered hand which would have made them excellent foragers.

The thumb spike is one of their best-known features.

It would have made an excellent stiletto-style weapon against predators and also could have been used to break into fruit.

It’s believed they held their long, heavy tail high in the air for balance.

The genus was named in 1825 by English geologist Gideon Mantell.

Editing Facebook settings can reveal which friends SECRETLY fancy you