MailOnline has had a sneak peak of the first ever ‘net zero’ McDonald’s restaurant ahead of its opening today.

The new branch, based in the town of Market Drayton in Shropshire, acts as a ‘blueprint’ for future restaurants around the country, the fast food giant says.

Building cladding is made from recycled IT equipment like printers and computer monitors, as well as recycled white goods such as refrigerators and dishwashers.

But McDonald’s told MailOnline it is committed to keeping beef on its menu provided it is sustainably sourced, despite the fact a transition to plant-based food will dramatically cut greenhouse gas emissions.

McDonald’s UK and Ireland, which currently operates around 1,400 restaurants, is on a quest to slash carbon emissions to become entirely ‘carbon neutral‘, it announced in October.

Globally, the company wants to reach net zero emissions – meaning its greenhouse gas emissions are removed from the atmosphere through reduction measures – across the world by 2050, but in the UK and Ireland its net-zero target has been set a decade earlier, for 2040.

Even sooner – by 2030 – all newly-built McDonald’s stores in the UK and Ireland will be net zero, designed following the blueprint of the new Market Drayton store. 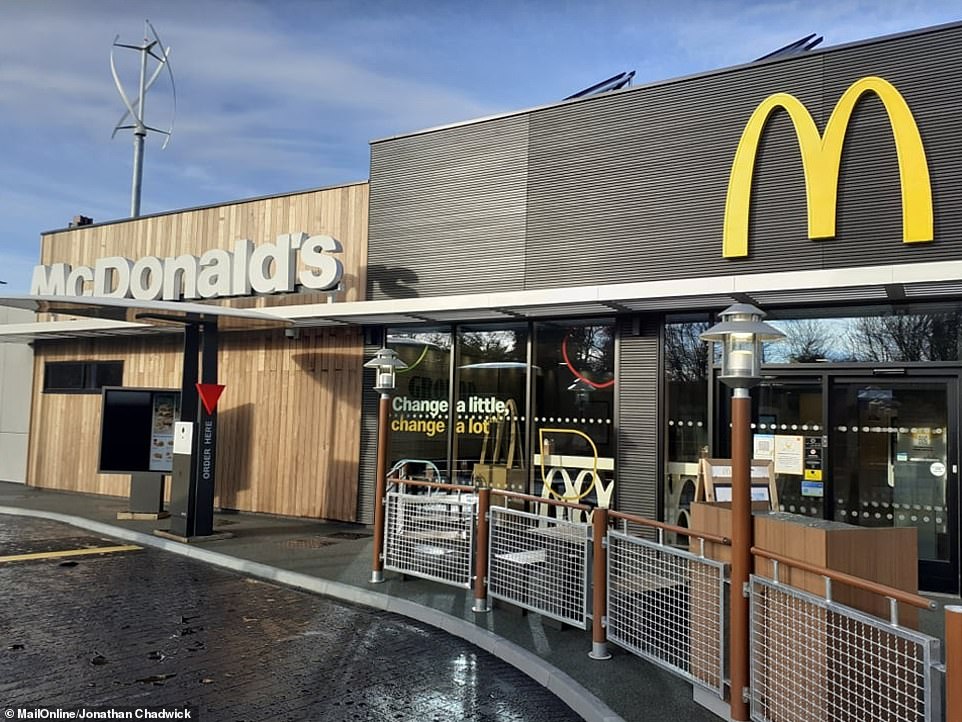 At first glance the new branch (pictured) looks rather like any other, but it features a range of subtle environmentally-friendly design features, including kerb stones each made from recycled plastic bottles and a Drive-Thru lane made from recycled tyres. In the background you can see one of the on-site wind turbines that provides about 15 per cent of the branch’s energy needs along with solar panels on the roof 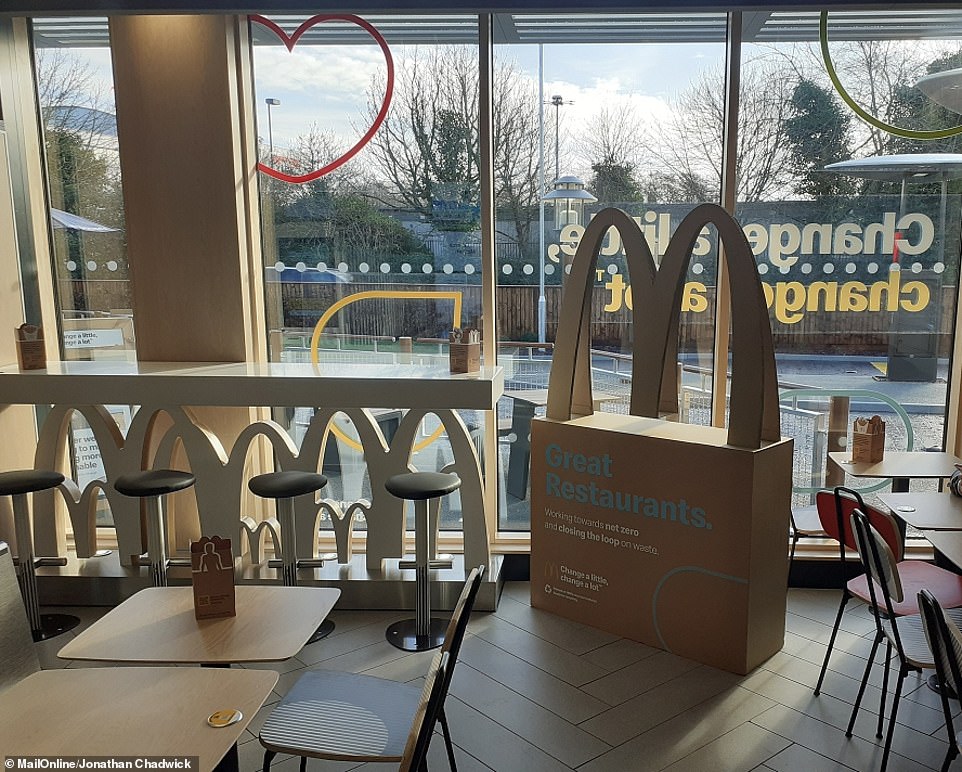 The new restaurant has been ‘deliberately designed to retain the familiar McDonald’s look and feel’, the fast food giant says, and features design materials including sustainably sourced timber and recycled plastic 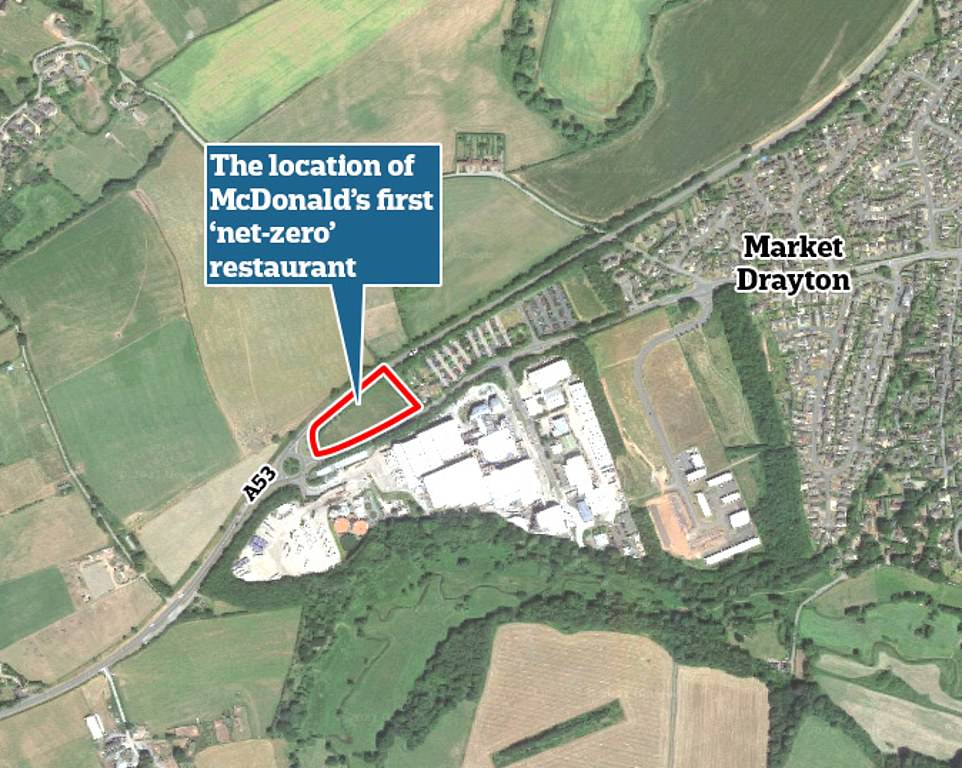 The first ‘net-zero’ McDonald’s restaurant in the UK is on the western edge of Market Drayton, on a patch of land between the A53 and Shrewsbury Road

WHAT IS NET ZERO CARBON?

Net zero refers to achieving an overall balance between emissions produced and emissions taken out of the atmosphere.

Net-zero organisations should be actively reducing their emissions aligned to a 1.5ᵒC science-based target in line with the Paris Agreement.

There will be some carbon emissions that cannot be eliminated with current technology, so to achieve net zero, it is essential that certified greenhouse gas removals are also in place.

The UK government says it is committed to ensuring emissions generated by the UK re offset by removing the same amount of carbon from the atmosphere.

There are two main ways this can be achieved – by planting more trees and by installing ‘carbon capture’ technology at the source of the pollution.

The new Market Drayton branch, dubbed its ‘greenest yet’, is on a patch of land between the A53 and Shrewsbury Road, close to business units owned by dairy product manufacturer Müller at the west of the town.

It stocks all the regular items that you’d expect in a usual McDonald’s restaurant, including the new ‘McPlant’ burger, which was first released in the UK in September and is still rolling out to all restaurants around the UK.

‘Within the UK, we are working towards 2030 for our restaurants and offices being net zero emissions,’ Gareth Hudson, UK & Ireland development director at McDonalds, told MailOnline over a McPlant in the new restaurant.

‘This restaurant is a real marker in the sand and we are using it as a blueprint. For new restaurants and existing restaurants we want to be carbon net zero.’

Net zero means any emissions would be balanced by schemes to offset an equivalent amount of greenhouse gases from the atmosphere, such as planting trees or using technology like carbon capture and storage.

Hudson said the branch is the first McDonald’s in the world that’s net zero in terms of both its construction and ongoing operations.

However, he admitted that there are aspects of the site that the ‘carbon neutral’ label doesn’t cover – namely, emissions from vehicle exhausts in the Drive-Thru lane as customers place and wait for their order.

The site is also on the edge of town, meaning customers need to switch on their engines and drive to get there, rather than having the option of walking – hardly a environmentally-friendly design innovation.

It’s undeniable that the new branch has a number of ingenious design features – at first glance the Drive-Thru lane looks like it’s made from tiny pebbles, but actually it consists of blitzed up bits of old vehicle tyres.

The Drive-Thru lane is also permeable – meaning any rain that falls through the tyres gets collected underground and is used to flush the customer toilets.

Other innovations at Market Drayton include wall art made from recycled polystyrene cups, fixed in place with potato starch from McDonald’s potatoes, while the interior furniture is heavy on sustainably sourced timber and recycled plastic.

A piece of wall art saying ‘Ground Coffee’ is also partly made from used coffee beans. 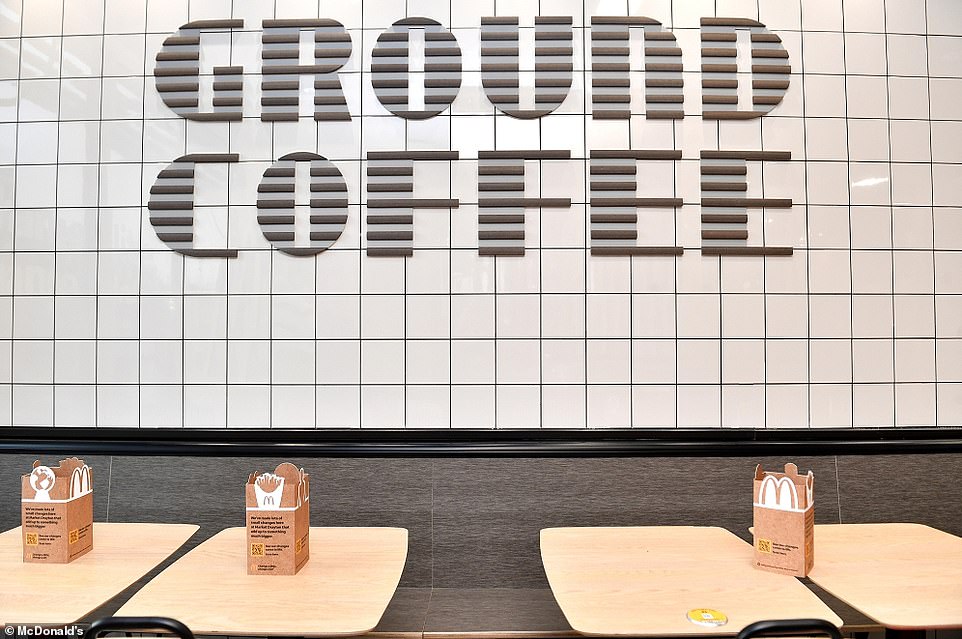 From a Drive-Thru lane made from recycled tyre and wall art made from used coffee beans (pictured), the new restaurant acts ‘as a testing site for industry-first innovations’ McDonald’s says 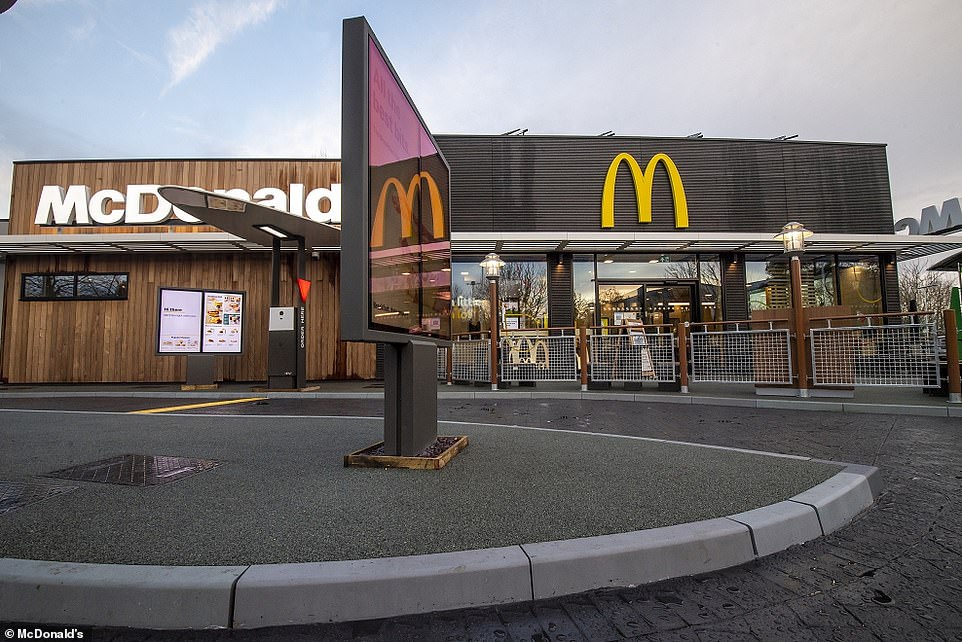 Renewable power from two wind turbines and 92sqm of solar panels – producing 60,000 kWhs of power per year, and reducing the amount of energy the restaurant draws from the grid 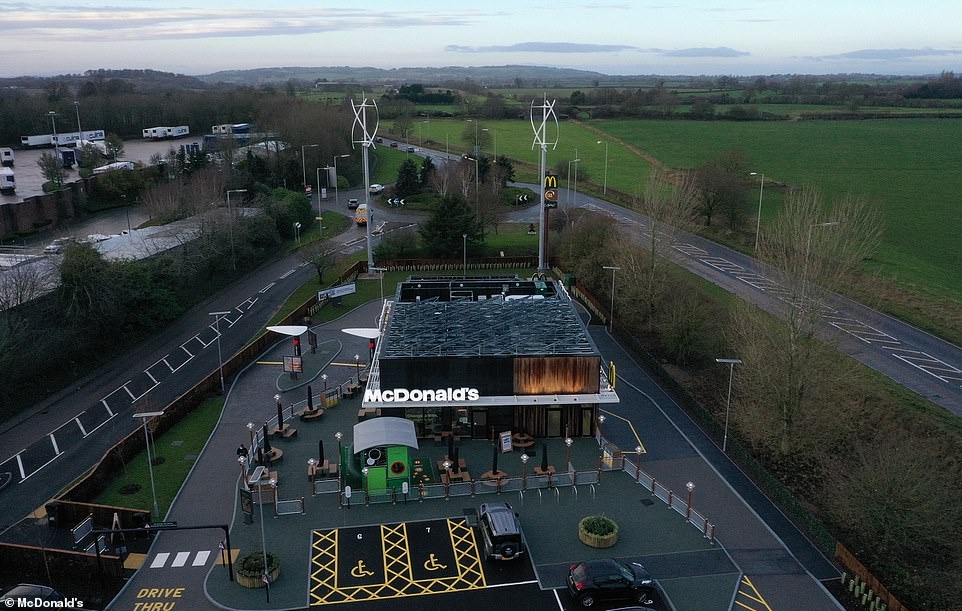 Image taken by drone shows an aerial view of the new McDonald’s store, which opens to the public today – Friday, December 10

At the Market Drayton branch, around 15 per cent of total power used – about 60,000 kWhs of power per year – comes from its own solar panels on the roof and two on-site wind turbines, while the rest is purchased and totally renewable.

To help keep in heat, McDonald’s has also used British sheep’s wool as a sustainable alternative to man-made building insulation, which is often made from plastic fibres.

Kerbsides also look like concrete, but they’re actually made from recycled plastic bottles, which McDonald’s says reduces CO2 emissions by over 25kg per kerbstone compared to standard concrete curbs.

During the construction of normal concrete, calcium carbonate is broken down in calcium oxide and CO2. The process also burns fossil fuels to heat kilns to achieve the required reaction temperatures.

McDonald’s is also already buying only renewable electricity for use in many of its restaurants, turning cooking oil into fuel for its delivery trucks and rolling out electric vehicle (EV) charge points.

The new Market Drayton branch has a small number of EV chargers in the car park, but it may ramp this up to fit demand as the public is forced to transition away from polluting petrol and diesel vehicles. 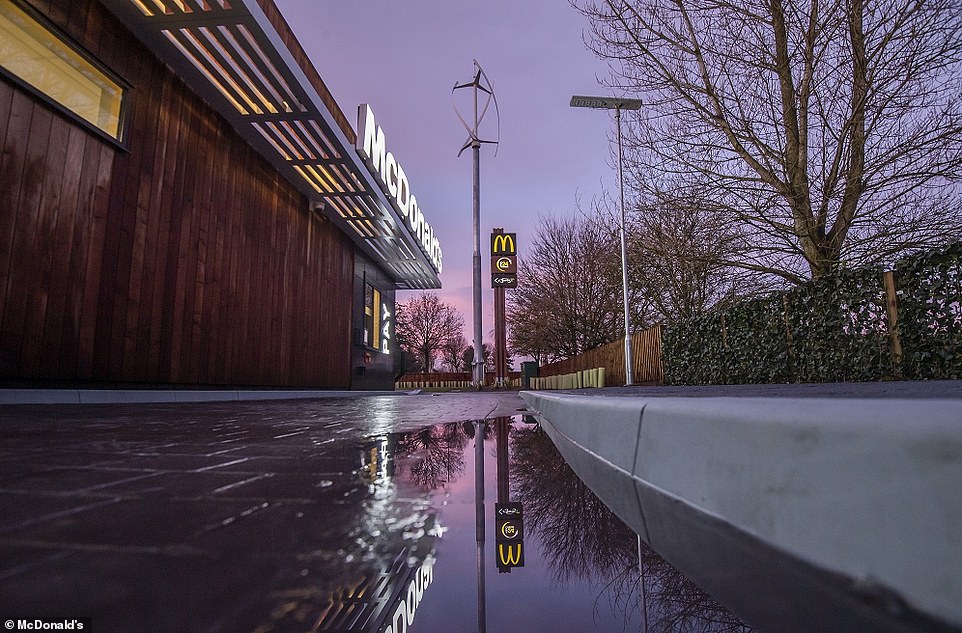 Rainwater will be collected and used to flush toilets at the new branch, McDonald’s told MailOnline at a press day prior to the official opening on Friday 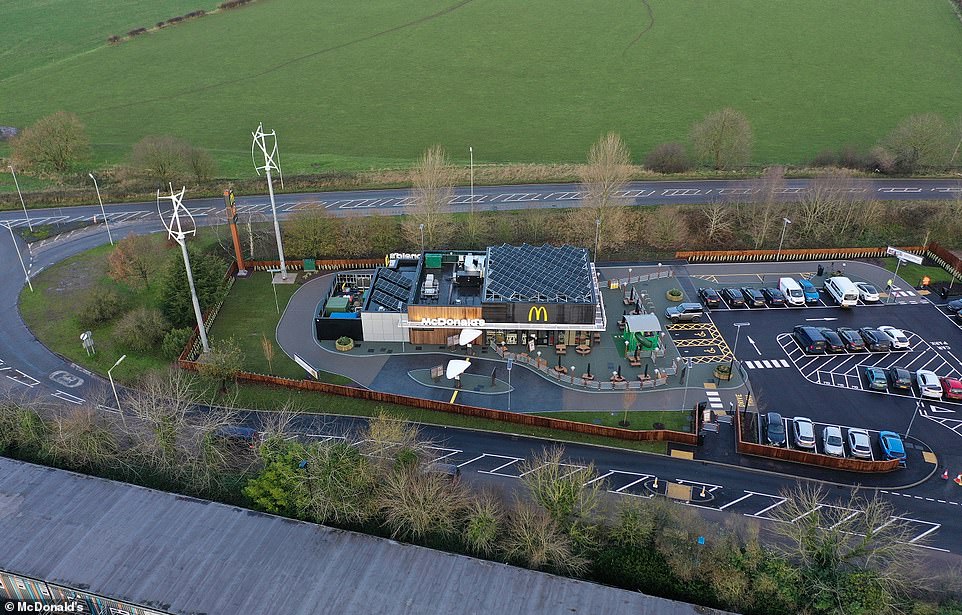 The car park is dotted with electric vehicle (EV) charging points. The company admitted it can’t account for the carbon emissions that come from customers’ petrol and diesel cars 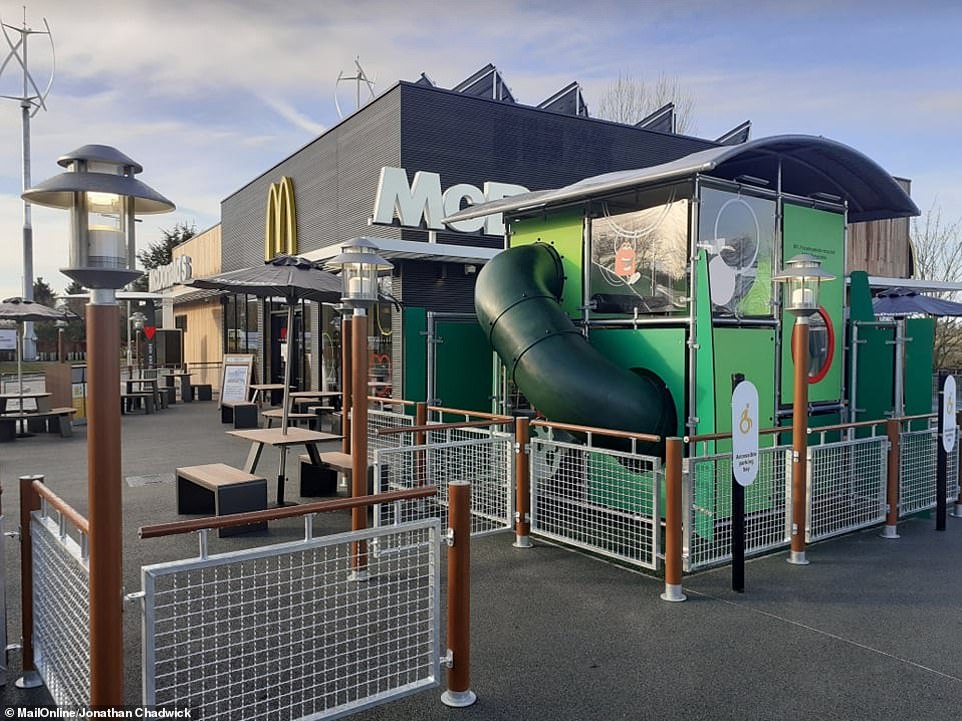 The new site includes a play pen with 80 per cent recycled and 100 per cent recyclable green panels. The site will soon have an adjacent biodiversity garden and nature trail designed by schoolchildren

In terms of menu items, the Market Drayton branch is no different to other McDonald’s restaurants around the company – it’s stocked with meat products including the famous Big Mac.

Beth Hart, McDonald’s vice president for supply chain and ‘brand trust’, was tight-lipped on other plant-based options that might come to menus in the future, but much depends on how the public takes to ‘McPlant’.

‘Do I think our menu will look the same in 2030 and 2040 as it does now? It probably will if McPlant takes off – we could have other little members of the McPlant menu in future.’

The McPlant patty is made out of pea protein, rapeseed oil, potato starch, rice protein and other ingredients but it has a good smokey aroma that’s not too far from the real deal.

Along with a slice of vegan cheese, gherkins, sauce and sesame bun, it does a decent job of impersonating the McDonald’s Quarter Pounder.

Currently, McDonald’s is one of the largest beef purchasers in the world. Roughly 80 per cent of its total emissions come from its supply chain, in particular its use of beef, chicken, dairy and other proteins. 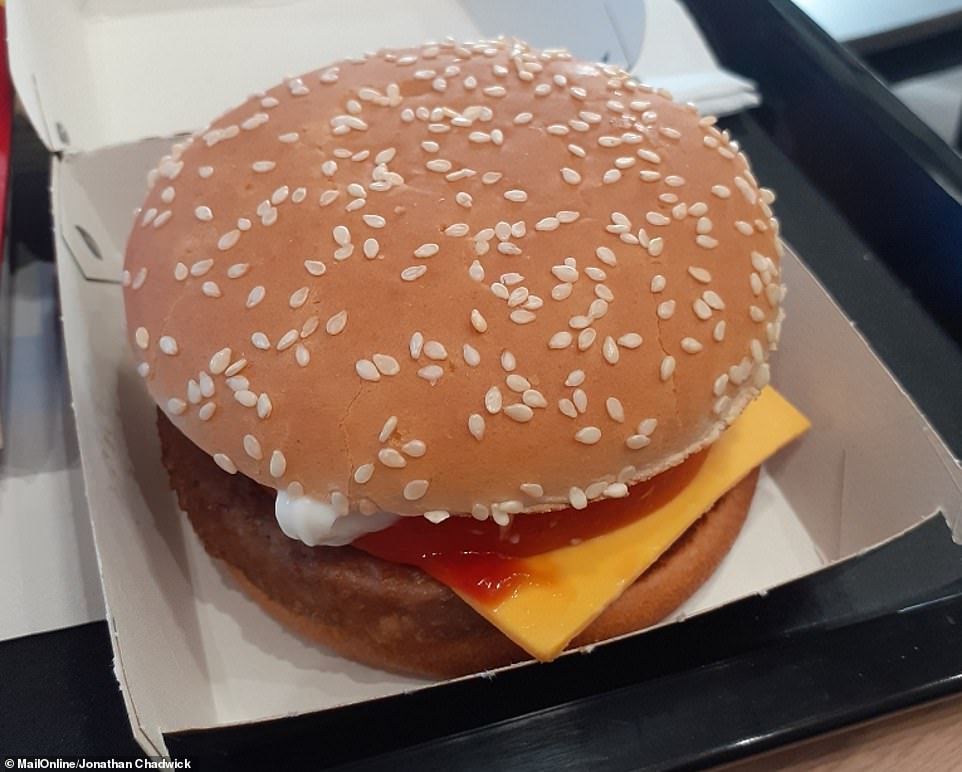 Vegan alternatives to meat, such as those made by soy and even fungi, help the environment by cutting the amount of greenhouse gas emissions, which are notoriously generated by cattle.

Amazingly, just one Big Mac is the equivalent of driving nearly eight miles in terms of carbon dioxide emissions, according to carbon calculator Plate Up For The Planet.

However, McDonald’s is in no rush to overhaul its menu with plant-based alternatives, and will merely follow the desires of its customers, according to Hart – although she said the company is committed to sourcing its meat sustainably, such as more ingredients from local producers.

McDonald’s is also planning to set up a ‘biodiversity garden and nature trail’ adjacent to the Market Drayton restaurant site, designed in collaboration with a local school. 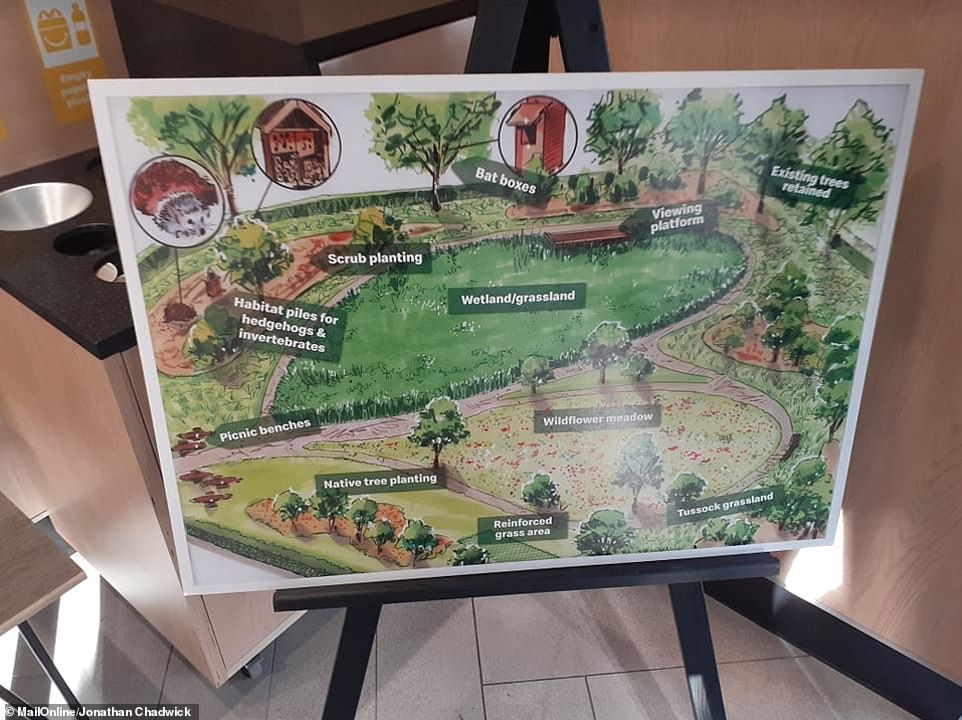 Inside the restaurant is a plan for a biodiversity garden and nature trail, which is set to be opened next to the site in spring 2022

The area, set to open in spring next year, will ‘improve local ecology and biodiversity’ by providing homes for insects and wildlife including hedgehogs.

In October, McDonald’s unveiled its ‘Plan for Change’ programme – a multi-point sustainability strategy to achieve its aim of net zero emissions across its entire UK and Ireland business, including its value chain, by 2040. This is 10 years ahead of McDonald’s plan to be completely carbon neutral globally.

By 2023, all furniture in new and refurbished restaurants will be made from recycled or certified materials and designed to be recycled or reused.

‘PLAN FOR CHANGE’: MCDONALD’S TIMELINE FOR A MORE ECO-FRIENDLY FUTURE

2021: McDonald’s UK & Ireland will launch its first restaurant built to a UK industry net zero emissions standard in Shropshire. When the restaurant opens in November, it will be a first for the UK industry and will act as a blueprint for future restaurants.

2024: McDonald’s UK & Ireland customer packaging will be made from renewable, recycled or certified sources and designed to be recyclable or compostable.

2025: McDonald’s UK & Ireland will be a market leader in vegan plant-based food, beginning with the recent launch of the 100 per cent vegan McPlant burger.

It will drastically cut the use of plastic in the more than 1 billion children’s toys it sells globally each year by the end of 2025.

2030: McDonald’s UK & Ireland will have helped one million people gain new skills and open doors to jobs. As part of this, McDonald’s UK&I will have supported 3,000 apprentices by 2025 and have introduced a youth worker into every UK restaurant by 2024.

McDonald’s UK & Ireland will aim to achieve net zero emissions for all its restaurants and offices.

2040: McDonald’s UK & Ireland will aim to achieve net zero emissions across its entire business by addressing all the ways it impacts the climate, and significantly reducing and removing greenhouse gas emissions.

Change this iPhone setting so advertisements stop TRACKING you across web