Facebook mistakenly took down the official page for a French town called Bitche, after its algorithms dubbed the name as offensive.

The official page for Bitche, a town in northeastern France near the border with Germany, was removed on March 19, but has only just been addressed by Facebook.

Facebook France said the mistake was made ‘following an incorrect analysis on the part of our systems’.

It has since apologised for the embarrassing error and restored the page. 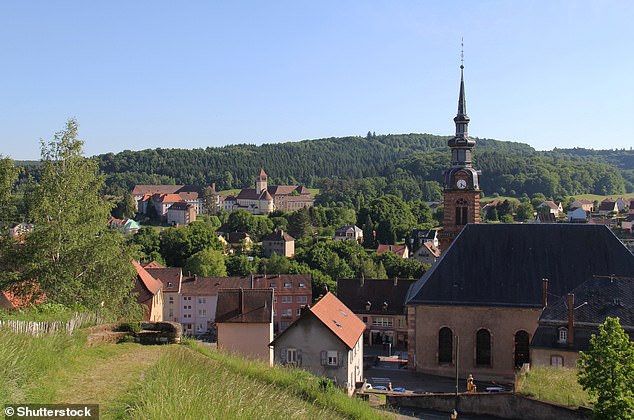 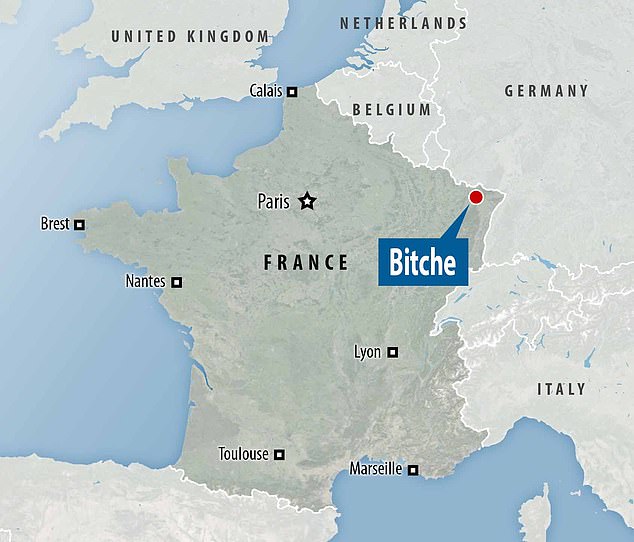 Bitche is a town in northeastern France near the border with Germany with a population of around 5,000

A Facebook spokesperson told MailOnline that the page was removed in error and was restored on Tuesday morning.

Degouy said the new page was named after the town’s post code, Mairie 57230, to get past Facebook’s automated moderating system.

‘I tried to reach out to Facebook in every possible way, through different forms, but there’s nothing [I could] do,’ Degouy said.

She added that she ‘already had issues when [she] first created the page’.

The town’s original page is once again active, and on Tuesday posted a statement regarding the debacle.

The statement, translated to English, reads: ‘Facebook had censored our Bitche City page.

Laurent Solly, President General Manager of Facebook France, personally contacted Bitche Mayor Benoît Kieffer to inform him that the page has been published again and to apologise for any inconvenience caused. 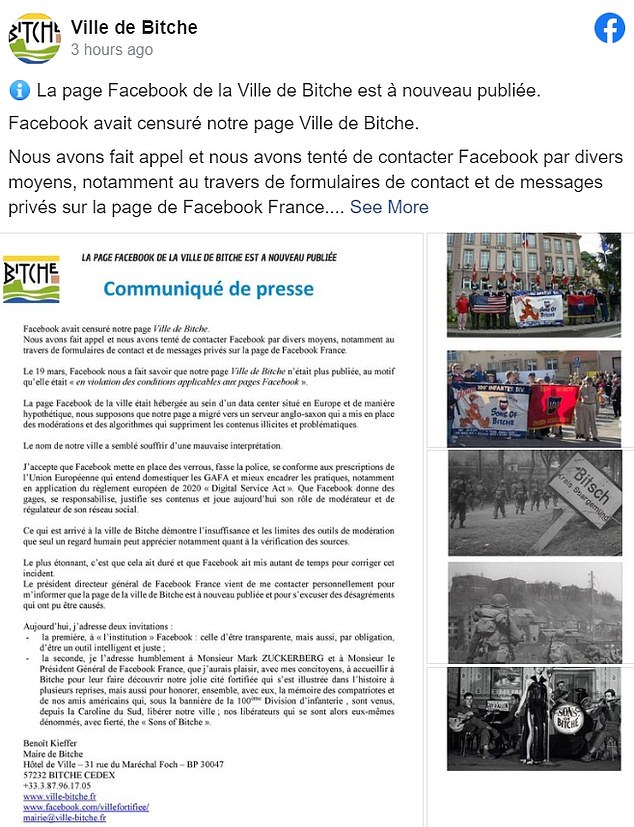 The Bitche is back: The town’s official page is once again active, and on Tuesday posted a statement regarding the debacle 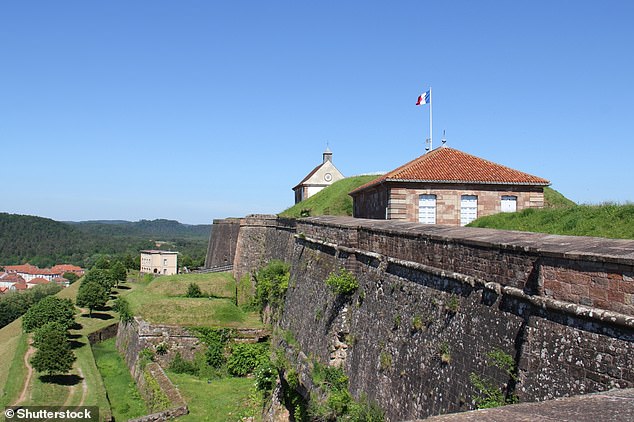 Kieffer said: ‘The name of our town seems to suffer from a bad interpretation … the most astonishing thing is that Facebook took so long to correct this.’

‘What has happened to the town of Bitche demonstrates the insufficient and limited moderating tools that only the human gaze can appreciate,’ he said.

Kieffer did add, however, that Bitche would welcome Facebook founder Mark Zuckerberg ‘to discover our pretty fortified city.

As noticed by Politico, another town in the region, Rohrbach-lès-Bitche, took preventive measures and renamed its page ‘Ville de Rohrbach’.

The town said in a post of its own: ‘We wanted to explain the name change of the page.

‘Far from us the idea of denying the name of our beautiful village… but it is to see that Facebook seems to be hunting the term.

‘We preferred to anticipate rather than risking a page closure.’

On March 19, Facebook informed us that our Town of Bitche page was no longer published, on the grounds that it was ‘in violation of the terms applicable to Facebook pages’.

The city’s Facebook page was hosted in a data center located in Europe and in a hypothetical, we assume that our page has migrated to an Anglo-Saxon server which has set up moderations and algorithms that remove illegal and problematic content.

The name of our city seemed to suffer from a misinterpretation.

I accept that Facebook will put in place locks, police, comply with the prescriptions of the European Union, which intends to domesticate GAFA and better supervise practices, in particular in application of the 2020 European ‘Digital Service Act’ regulation.

That Facebook gives pledges, takes responsibility, justifies its content and today plays its role of moderator and regulator of its social network.

What happened to the town of Bitche demonstrates the insufficiency and the limits of the moderation tools that only a human eye can appreciate, especially with regard to the verification of sources.

The amazing thing is that it lasted and that Facebook took so long to correct this incident.

The CEO of Facebook France has just contacted me personally to inform me that the page for the town of Bitche has been published again and to apologise for the inconvenience that may have been caused.

– The first, to the Facebook ‘institution’: that of being transparent, but also, by obligation, to be an intelligent and fair tool

– The second, I humbly address it to Mr. Mark ZUCKERBERG and to Mr. General President of Facebook France, whom I would be pleased, along with my fellow citizens, to welcome at Bitche to make them discover our pretty fortified city which has been illustrated in history at several times, but also to honor together, with them, the memory of the compatriots and of our American friends who, under the banner of the 100th Infantry Division, came, from South Carolina, liberate our city; our liberators who are then themselves named, with pride, the ‘Sons of Bitche’