Navy Seabees built Vice President Kamala Harris and the secretary of the Navy new desks out of materials from historical U.S. ships.

Harris’ desk, which sits in her office in the West Wing of the White House, is made from wood, copper and nails taken off the USS Constitution.

The vice president received the desk in February and showed it off in March 27 tweet, writing: ‘For all you history buffs: the desk in my West Wing office was constructed by the @USNavy out of reclaimed materials from the USS Constitution warship. On this day in 1794, President George Washington signed the Naval Act which authorized construction of the USS Constitution.’

The USS Constitution is one of the country’s first frigates and is the oldest commissioned warship still afloat. It was launched in 1797 in Boston, Massachusetts.

Harris’ desk has carvings of an eagle surrounded by stars, reminiscent of the Constitution’s stern decorations. It was built by the United States Naval Construction Battalions, better known as the Navy Seabees.

The project was approved under President Donald Trump and construction began Jan. 4. The desks were the idea of Trump’s Navy Secretary Kenneth Braithwaite, the Military Times reported. 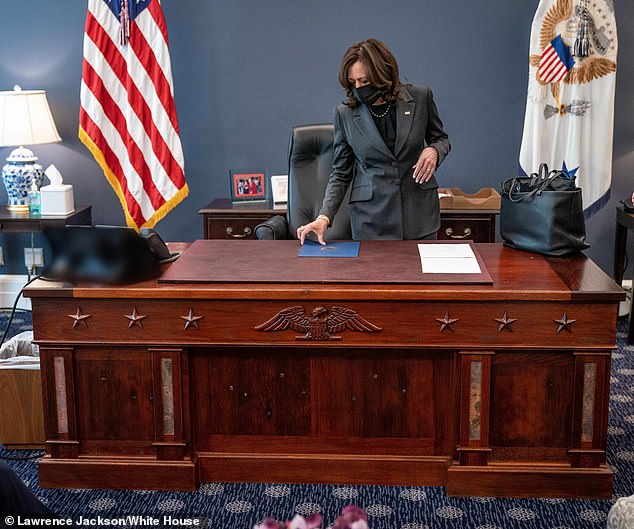 Vice President Kamala Harris’ desk, in her West Wing office, is built from wood, copper and nails taken off the USS Constitution 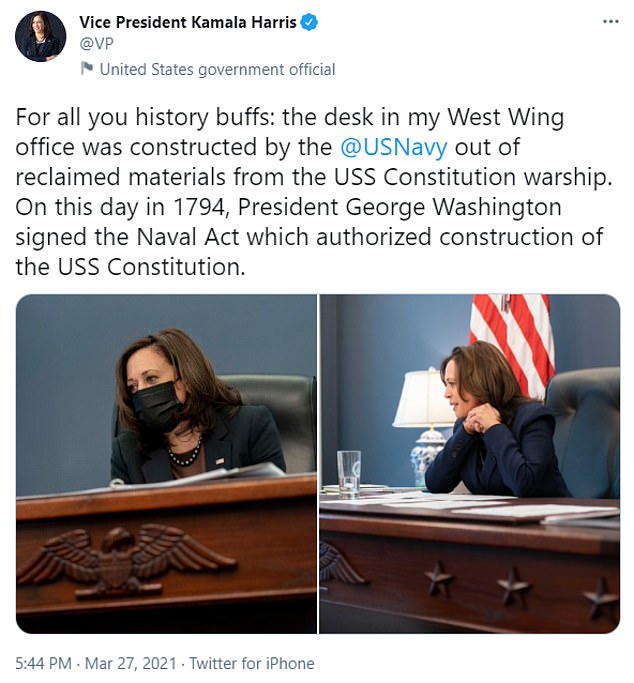 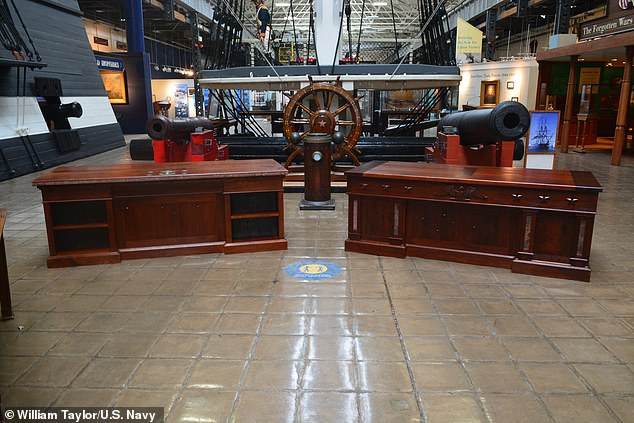 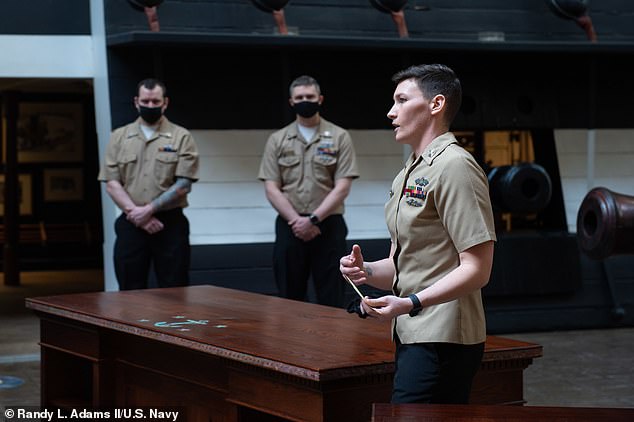 Builder 1st Class Hilary Lemelin gives a speech during an executive desk presentation event at the National Museum of the U.S. Navy

The desks took about seven weeks to build and are the property of the Navy. They will be available for future vice presidents and navy secretaries to use.

They were built in a workshop at the Navy Yard’s National Museum in Washington D.C.

‘It’s a huge opportunity to be a part of,’ said Builder 1st Class Hilary Lemelin, who is assigned to USS Constitution, in a statement. ‘It’s amazing to create a desk for someone who makes such large decisions for the country and Navy knowing they’ll sit there every day is huge. The importance of their job can affect everything we do. It’s a piece of history now.’

The two new desks are known as ‘heritage desks’ and are similar to the Resolute Desk, an historic desk which has been used by the five most recent presidents in the Oval Office.

The Resolute Desk was a gift from Queen Victoria to President Rutherford Hayes in 1880. It was built from the oak timbers of the British Arctic exploration ship HMS Resolute, which was abandoned in the Artic in 1854 and found by an American whaling ship a year later.

The 1,300-pound desk was created by William Evenden at Chatham Dockyard in Kent.

The Seabees also built a desk for the Navy secretary, using materials from the Constitution, the frigate Chesapeake; the battleships Texas, New Jersey and Arizona; and sloop of war Constellation.

Braithwaite didn’t get to use the desk he had the idea for building. Instead acting Navy Secretary Thomas Harker sits at it. But Braithwaite was able see the completed desk before it went to the Pentagon during a visit to the Washington Navy Yard.

Inside each desk is a pen tray with a note from Braithwaite and a piece of the USS Arizona, the battleship that sank during the 1941 attack on Pearl Harbor. 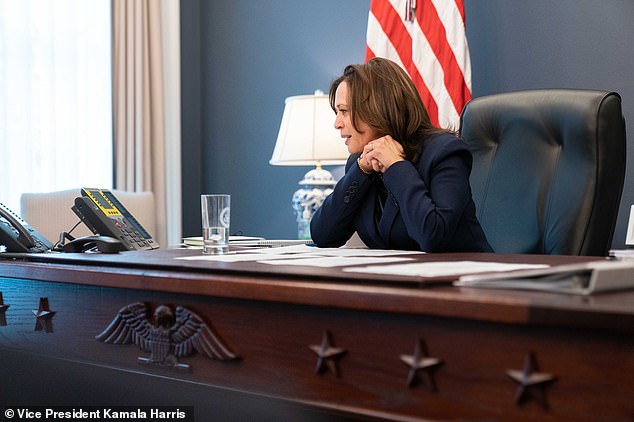 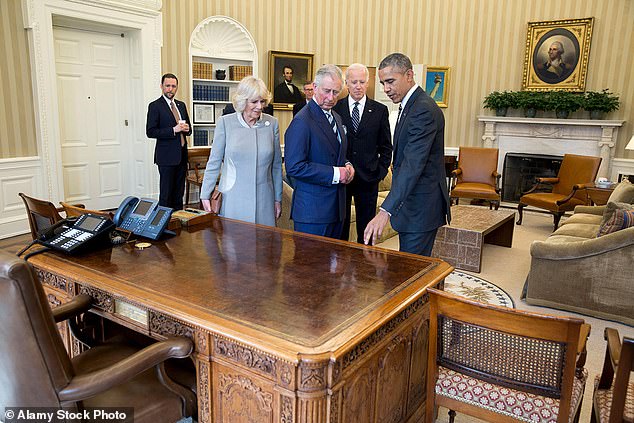 The new desks are similar to the Resolute Desk, the desk gifted by Queen Victoria and used in the Oval Office by the five most recent presidents, including Joe Biden; above President Obama and then-Vice President Biden discuss the desk with Charles, Prince of Wales and Camilla, Duchess of Cornwall, during a 2015 meeting 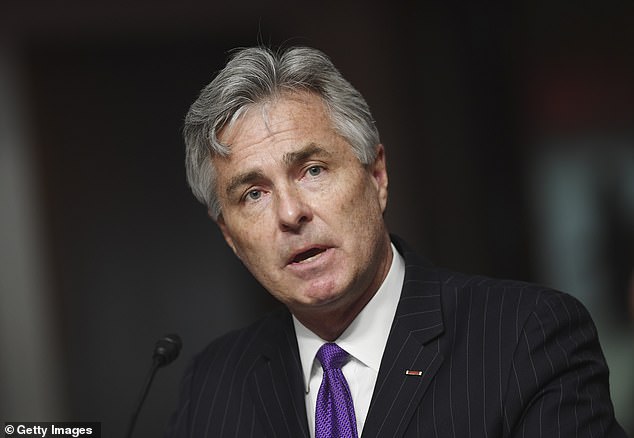 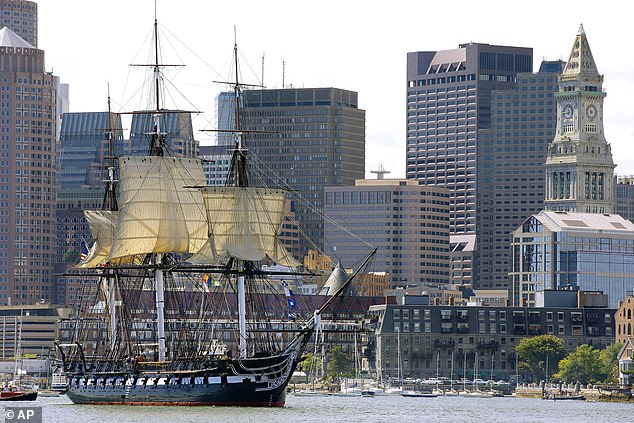 The USS Constitution, with its topsails unfurled, is towed through Boston Harbor past Boston’s financial district skyline in August 2014 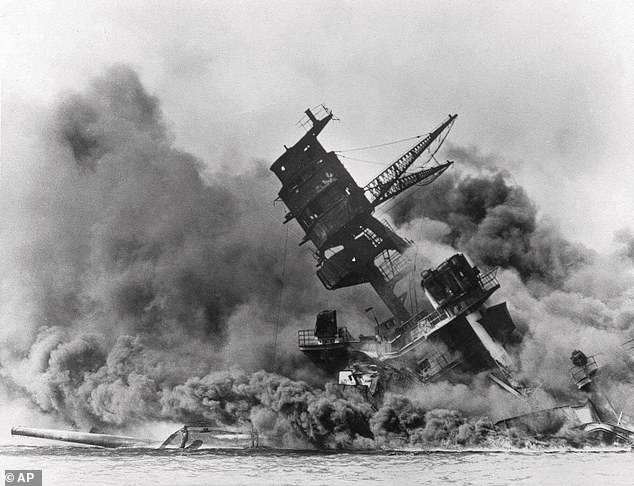 In this Dec. 7, 1941 file photo, smoke rises from the battleship USS Arizona as it sinks during the Japanese attack on Pearl Harbor

There are no current plans to build more ‘historic desks.

Both desks are part of the Navy’s 300,000-plus historic artifact collection maintained and curated by the Naval History and Heritage Command at the Washington Navy Yard.