New York: Revisiting the Big Apple, which wants to prove it's still the world's most thrilling city
Advertisement

Rock in the house: The Wisconsin home with a 55-ton boulder wedged into its rear

Northern Territory crocodile attempts to attack woman on a boat

Tripadvisor reveals its 'year in review' for 2021

The city that’s meant never to sleep has awoken from its enforced hibernation and is back with an extra swagger.

Locals are even talking about silver linings to the horrors of the past 18 months. And they have a point.

The pavements look cleaner; the street food more expansive; the Broadway lights brighter; the people less jaded and even the wretched horses waiting to cart people around the city — at $60 (£45) a pop for a 20-minute ride — look perkier. ‘It’s as if New York is on its best behaviour,’ a shop assistant at Brooks Brothers tells me. 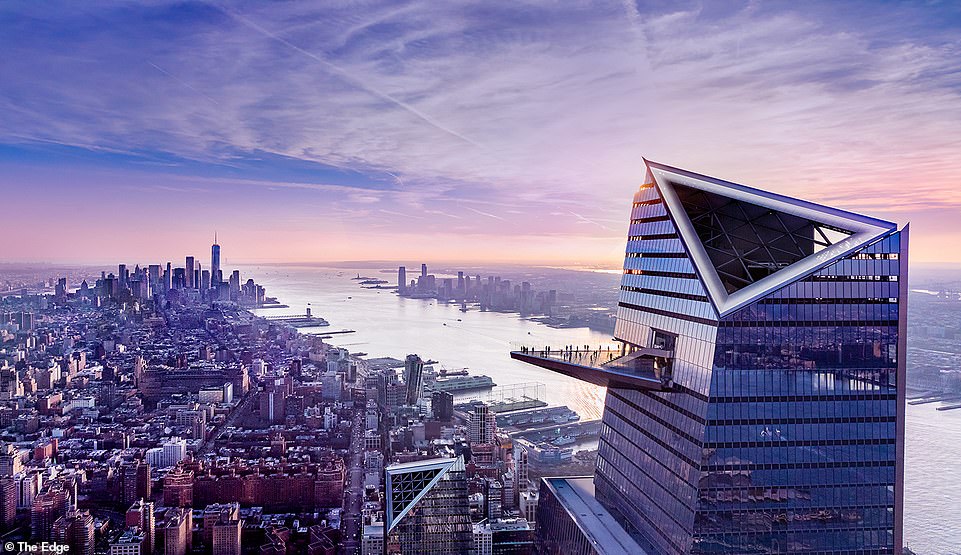 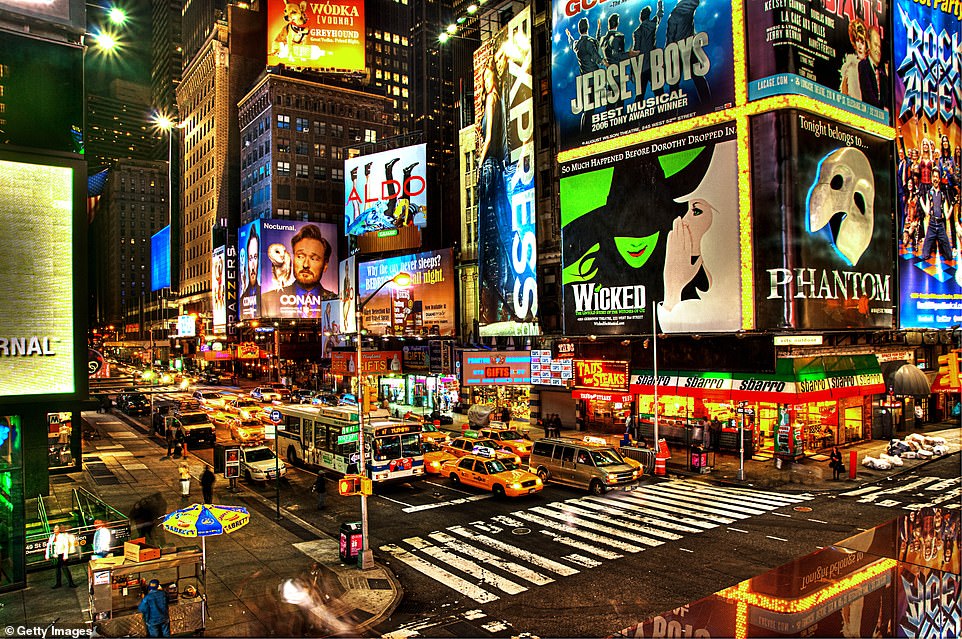 Light show: Broadway at night. According to Mark, ‘the Broadway lights are brighter’ in the aftermath of the pandemic

Best behaviour, but at a price. There was a time when the British could come to New York in the run-up to Christmas, book in to a mid-range hotel, buy presents for all the family and justify the whole shebang on financial grounds.

Not any more. Eat out anywhere decent in Manhattan and you might choke when the bill comes. My friend, also called Mark, and I are amazed on our first night when we pitch up at trendy Quality Bistro (terrible name, excellent food) on 55th Street between 6th and 7th Avenue and order six oysters to share, followed by steak and chips and a couple of green salads; two negronis and two glasses of pinot noir. Total: $248 (£188).

That’s the bad news. The good news on the eating front (although some residents don’t like this and it has become a contentious issue) is how restaurants have spilled out on to the street and erected sheds of all shapes and sizes, many with corrugated roofs, ambient lighting and heated seat pads. It might be overstating it to say that New York is starting out all over again — but the place feels different.

Don’t worry, though. The police sirens are still noisier, the fast food faster, the portions bigger (never ever order two Caesar salads if you’re a couple and remember that a ‘side’ of chips will feed a family of four), the beer colder, the dogs more pampered, the teeth whiter, the seasons more pronounced.

And, yes, yellow taxis still shake, rattle and roll along the same pot-holed streets at ferocious speeds — but the mood seems more nuanced.

Perhaps it helps that at the beginning of November, Eric Adams, a black former policeman, was elected mayor and is talking tough on crime. Like everyone else, he’s desperate to welcome back tourists.

Half of all hotel rooms in New York normally are occupied by international visitors, of which there are more than 13 million a year — or were. 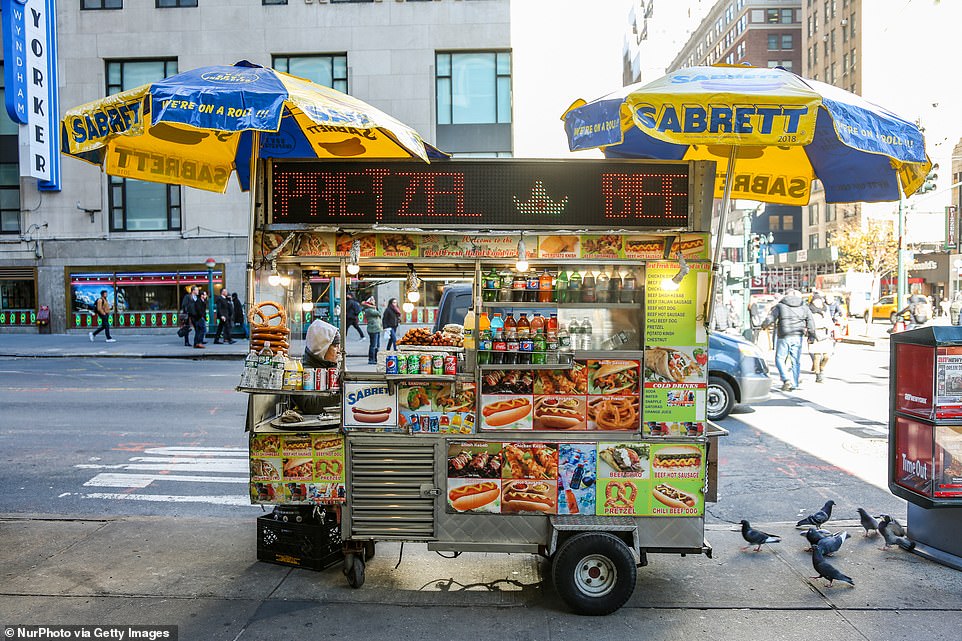 Colourful: A food stall in Manhattan. Mark finds that the city’s street food is ‘more expansive’ upon his return

TIPPING, QUEUING AND REACHING FOR THE SKY

DISCOVERY: In 1524 Italian navigator Giovanni da Verrazzano was the first European to see Manhattan island — but it wasn’t until 1624 that Dutch colonists established New Amsterdam in the city. It was captured by an English naval squadron in 1664, and its name changed to New York, in honour of the Duke of York.

50 CENT: The rapper and actor was born in Queens and lives in cool Midtown West. His best meal in town? Ruth’s Chris Steak House.

TIPPING: Add a dollar per drink for your bar person, and at restaurants add on 20 per cent. The cash goes to people behind the scenes, so don’t scrimp, even if the service isn’t great.

QUEUING: Don’t push in line, this isn’t Italy. Queue for pizza, tables, taxis, ferries and anywhere else you see a crowd forming.

REACHING FOR THE SKIES: The city’s first skyscraper was built in 1902 and there are now more than 6,000.

SAFETY TEST: Some 20 elephants paraded over Brooklyn Bridge when it opened in 1883 to highlight its sturdiness to sceptics.

There’s a new state governor, too, following the resignation of Andrew Cuomo after he was accused of inappropriate behaviour.

His successor, Kathy Hochul, the first ever female governor of New York, has announced a $25 million (£19 million) injection of funds for the I Love NY campaign.

Top of the bill is Little Island, a brand new public park built in the Hudson River where Pier 55 (the Titanic was meant to dock here) once stood, in what is now the Meatpacking District, with the Whitney Museum of American Art just across the road.

It’s a wonderfully affecting project, which aims to ‘ignite imagination, foster spontaneity and play, and support camaraderie and connection’.

Designed by Thomas Heatherwick and funded by Barry Diller (founder of Fox Broadcasting Company) and his wife, Diane von Furstenberg, via their charitable foundation, the 2.4-acre park suspended above the river and held up by concrete tulips is made up of grasses, lawns, trees, shrubs, walkways — plus an open plaza and 687-seater amphitheatre.

It’s free, open from 6am-8pm and strikes me as being indicative of the direction New York wants to go.

Here, at West 30th Street, where the famous High Line comes to an end (the stretch from 30th to 34th currently is closed), a series of massive buildings fight for air space above what used to be the giant storage yard for Long Island Rail Road trains.

New York’s ability to create new neighbourhoods is one of its great trademarks. This one claims to have the offices of Amazon and Facebook in its midst, plus one of the trendiest, most expensive hotels in Manhattan, courtesy of the Equinox fitness chain.

From one suite we look down at The Vessel, a bizarre structure of interlocking staircases also designed by Heatherwick. It’s currently closed because someone committed suicide here.

Then we are taken to the gym almost the size of a football pitch, with both an inside and outside pool.

A trio of beautiful people (one man, two women) wander past us in scanty swimwear as if they’re extras in a straight-to-video production, and I’m reminded of how, during my last visit to New York, a cab driver told me the difference between this city and others is that elsewhere you may feel like you’re watching a movie, but here in New York you’re in the movie. 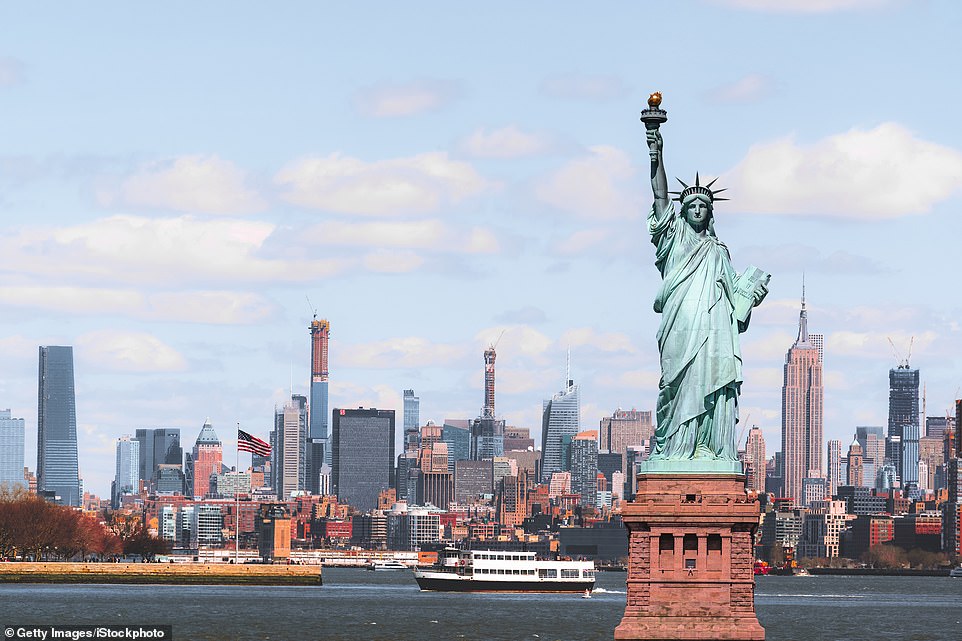 New York’s famous Statue of Liberty. ‘The city that’s meant never to sleep has awoken from its enforced hibernation with an extra swagger,’ Mark writes 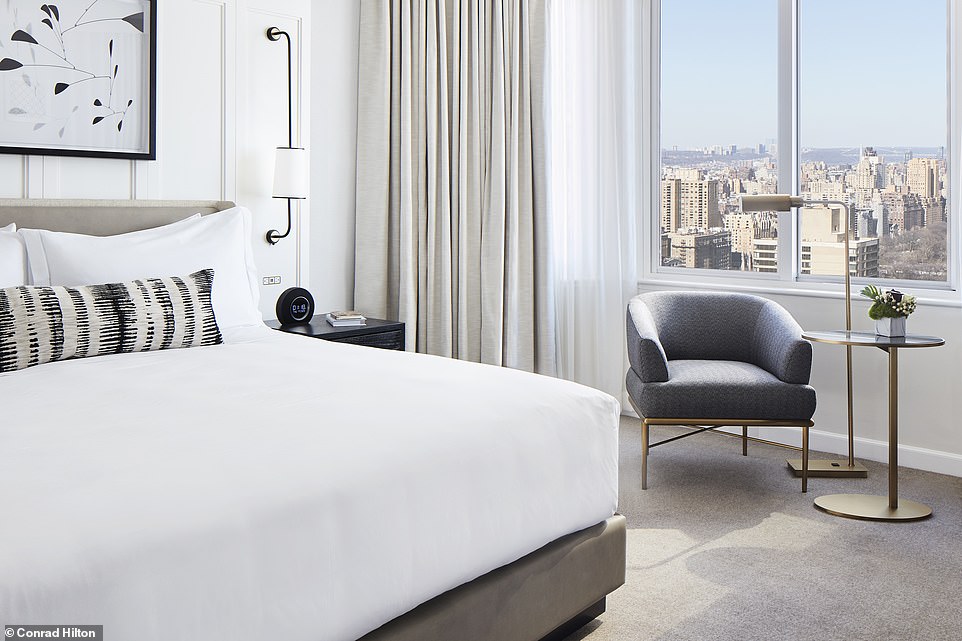 Mark stays at the ‘supremely comfortable Conrad Hilton’ in Midtown. Pictured is one of the hotel’s bedrooms 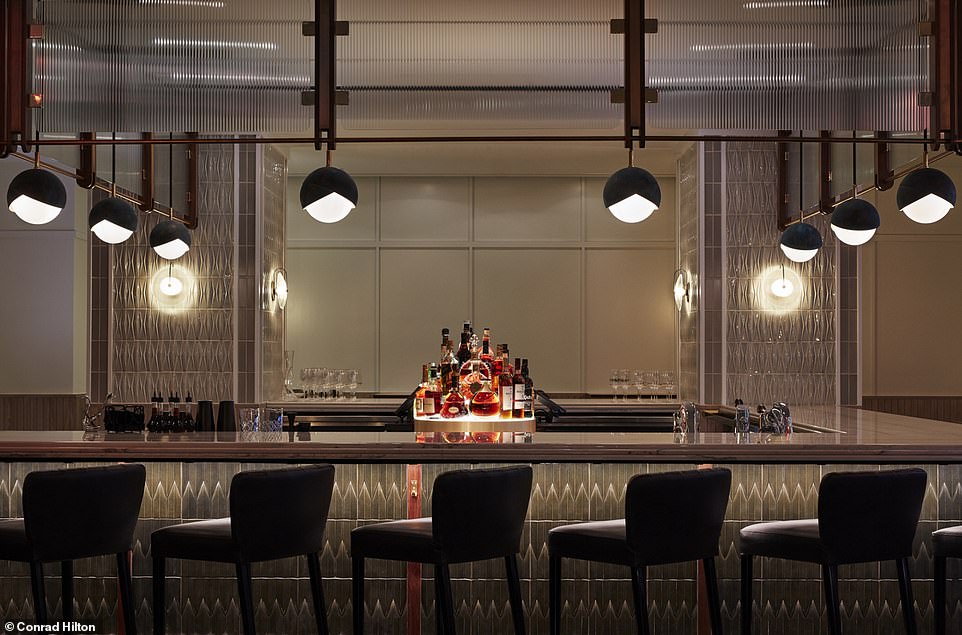 The bar at the Conrad Hilton. Mark’s room on the 40th floor has ‘commanding views over Central Park’ 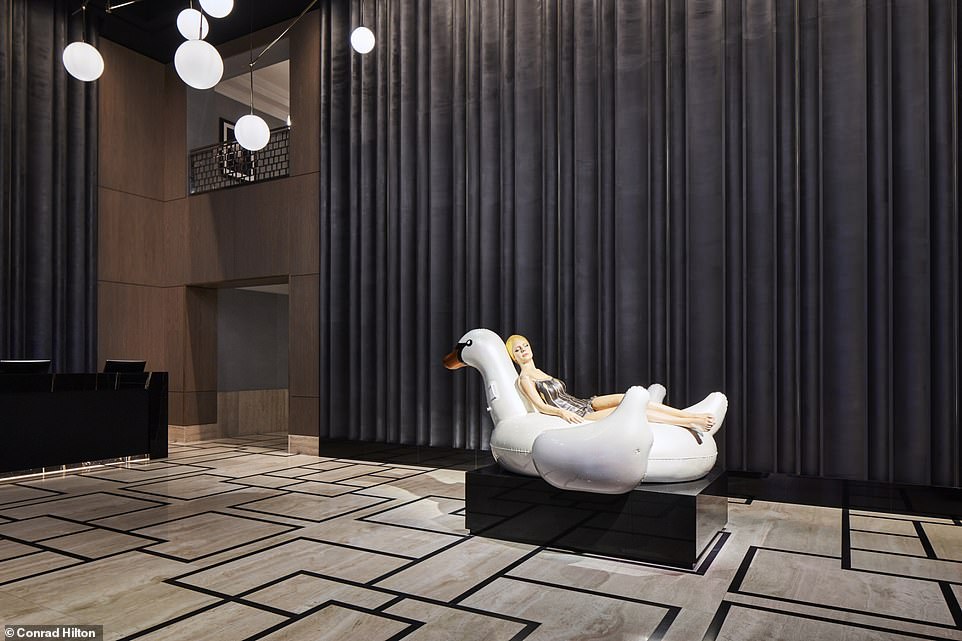 We are so taken by the brave new world of Hudson Yards that we have dinner in the Equinox hotel restaurant on the 24th floor.

It’s called Electric Lemon and when I ask what sort of food it serves, I’m told it’s ‘decadently healthy’. And (sorry to bang on about the money) unhealthily pricey. A ribeye steak costs $55 (£42), while pasta $34 (£26).

We stay in Midtown in the supremely comfortable Conrad Hilton, where my room on the 40th floor has commanding views over Central Park, that great green oasis without which New Yorkers would go crazy. 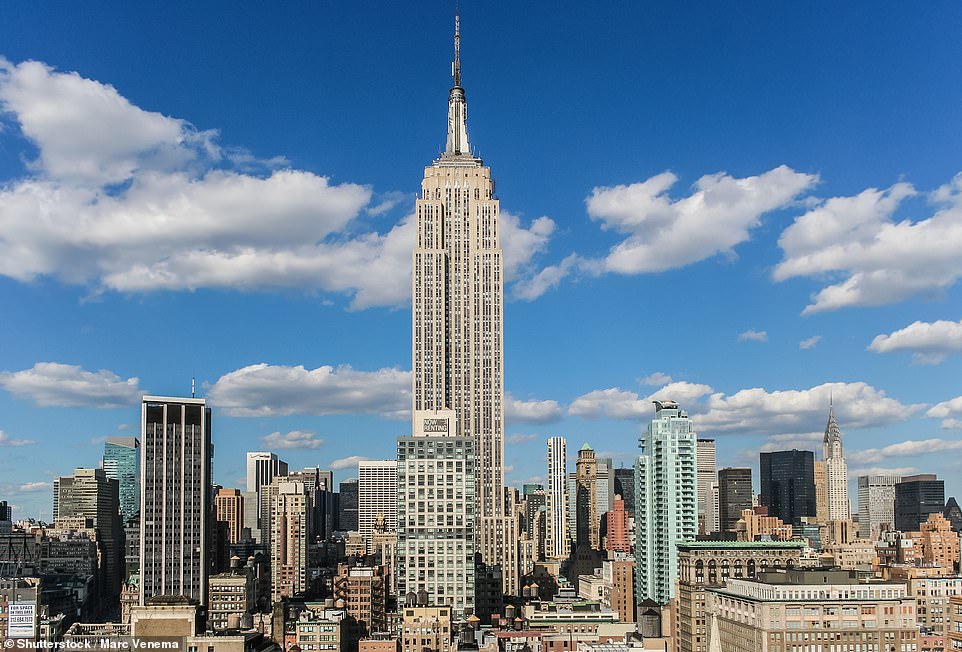 During his trip, Mark visits the Empire State Building (pictured in the centre) – ‘the most famous building in the world’

Another big new thing in New York is viewing platforms. There are now five of them, including one at Hudson Yards called The Edge. It opened the day before we got here.

Those of a particularly brave disposition can even be kitted out in a harness and scale the tip of the building, then lean out for an impressive photo opportunity.

‘People are clapping,’ says Mark. He’s right but it has nothing to do with the men and women in harness. A man has just gone down on his knees and proposed to his girlfriend. Thank goodness she says ‘yes’ and presumably feels on top of the world, as well as on top of New York’s latest tourist attraction.

‘What do you think is the most famous building in the world?’ I ask Mark. 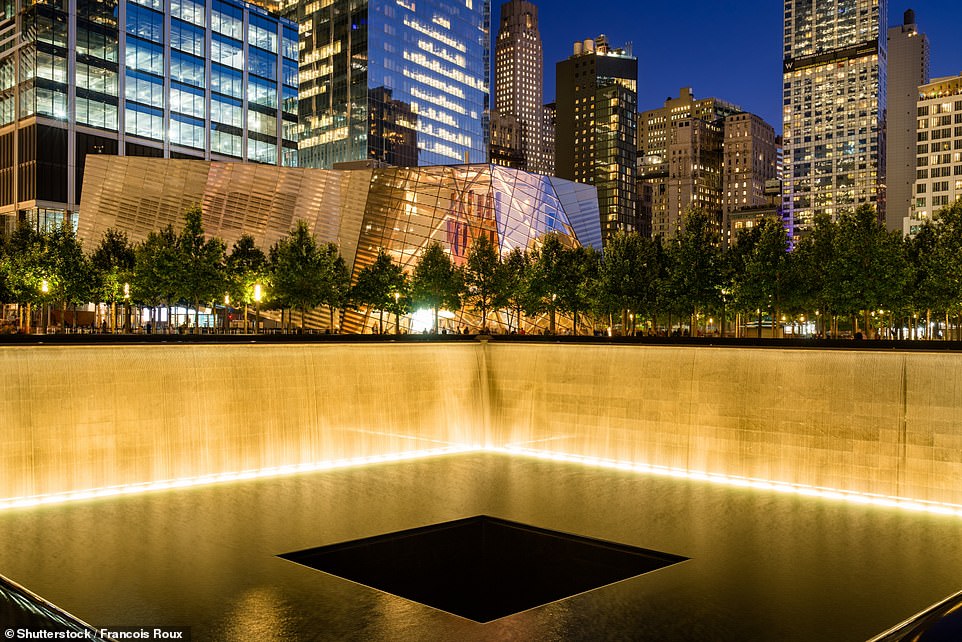 British Airways (british airways.com/new-york) flies up to eight times a day from London to New York, with return fares from £343.

‘The Eiffel Tower,’ he says. Which is surely nonsense. ‘The Empire State Building,’ I tell him.

Which is where we go that evening — even though it sounds like such a cliched thing to do. But it’s not. You can practically touch some of the skyscrapers from here — and not so far away is the dear old Pan Am Building, once the tallest in the world, looking as beautiful as ever but rudely overshadowed by so many twinkling arrivistes.

One place — perhaps the only place — where New York retreats in on itself is at the National September 11 Memorial Museum. Here, two pools with the largest man-made waterfalls in America are sunk into the ground within the footprints of the Twin Towers.

The cascading water drowns out the city’s traditional soundtrack and the names of all those who died in the terrorist attacks of 2001 are etched into the supporting walls. If you haven’t seen it, you must.

Everyone says that New York gives you an adrenaline rush like no other city — and they are right. I lived here for three years in the 1980s.

Even though I was mugged, twice, and lived with a family of cockroaches in the then unfashionable borough of Queens I loved it. Still do.

Tom Wolfe, author of that masterpiece about Manhattan, The Bonfire Of The Vanities, made the point more eloquently when he said: ‘One belongs to New York instantly, one belongs to it as much in five minutes as in five years.’